Christ in the House of His Parents

This picture, by John Everett Millais, was first exhibited in the Royal Academy in 1850.

Millais was one of the founders of the Pre-Raphaelite Brotherhood.
In 1848 he met with William Holman Hunt and Dante Gabriel Rosetti, and together with three other friends they set out aims for a new group of painters, poets & critics who were unhappy with the conventionality, sentimentality and 'muddy darkness' of current works.
Their aims were:
1 To have genuine ideas to express.
2 To study nature attentively, so as to know how to express them.
3 To sympathise with what is direct and serious & heartfelt in previous art, to the exclusion of what is conventional, self-parodying and learned by rote.
4 Most indispensable of all, to produce thoroughly good pictures & statues.

The Pre-Raphaelites were greatly influenced by nature and used fine detail to show the natural world, using a bright and sharp - focus technique on a white canvas.
Holman Hunt & Millais painted in thin glazes of pigment over a wet white ground.

Critics, used to soft-focus conventional portrayals, were shocked at the brilliance of colour.
The first Pre-Raphaelite pictures caused great controversy, but Ruskin praised their work for its devotion to nature and rejection of conventional composition. 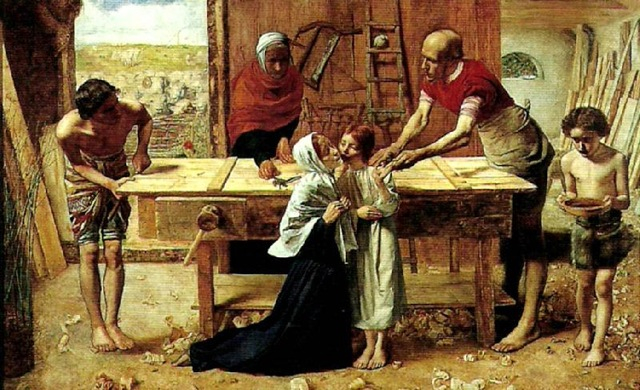 The picture is meticulously painted.
The artist studied every detail and where possible used real-life models.
Joseph's arms are those of a working carpenter.
Symbols are everywhere: the Christ-child's wounded hand and bloodied foot speak of crucifixion, the sheep herded outside represent the church: John the Baptist, His cousin, carries water for His wounds but reminds us of his role as Baptiser of the Lord.

Charles Dickens severely criticised the painting.
In his Magazine Household Words he wrote:

'In the foreground of that carpenter's shop is a hideous, wry-necked, blubbering boy in a bed-gown, who appears to have received a poke in the hand, from the stick of another boy with whom he has been playing in the gutter, and to be holding it up for the contemplation of a kneeling woman,so horrible in her ugliness, that (supposing it were possible for any human creature to exist for a moment with that dislocated throat) she would stand out from the rest of the crowd as a Monster in the vilest cabaret in France, or the lowest gin- shop in England.'

I find it hard to relate these comments to what is one of my favourite of Millais' paintings.
For me, it is all that is best of the Pre-Raphaelites, fresh and bright and skilfully crafted, and full of hidden story-telling signs.
< PrevNext >