Prisoners in the Tower

When you are next in London, do take a look at the Tower of London.
It is full of really interesting historical artefacts, and has such a fascinating past. The Yeoman Warders are always ready to entertain visitors with tales of ghosts and anecdotes about past prisoners. 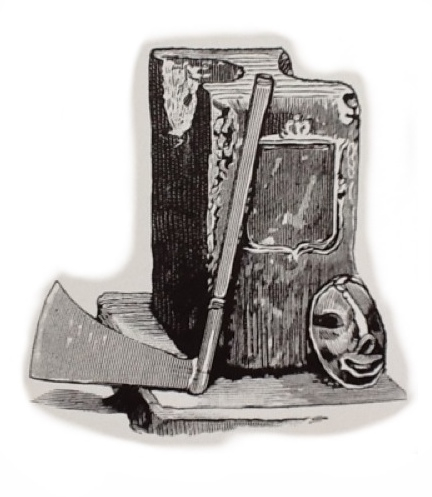 The Tower of London was built by William the Conqueror (1066-87) to be a fortress, but during its life has often been used as a prison.
The Tower was always looked upon as a symbol of state authority. 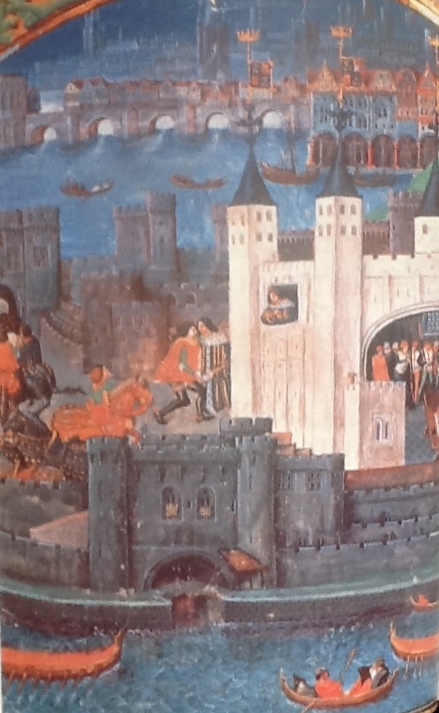 One of the earliest views of the Tower, c1483

Many of the most important figures in English history have been imprisoned there, some for many years; within its walls three English Queens were beheaded.
During the period from the 12th to the 18th century, a large number of foreign princes and English aristocrats were held in the Tower, and lived or died at the state's pleasure, being perceived as a threat to national security.
However, imprisonment did not necessarily involve rat-infested dungeons, torture and death.
Some prisoners were allowed to live in comparative luxury, in several rooms, with freedom to leave the Tower to shop or hunt!
John II of France,(1319-64), one of the most important of many nobles captured by the Black Prince, was a prisoner in 1360.
He arrived in great style, with a large retinue most of whom were lodged with local citizens.
He brought a tailor, a secretary, an organist (in a separate wagon with instruments), and several servants.
They all ate well,and he had shopping expeditions and visited local religious houses. 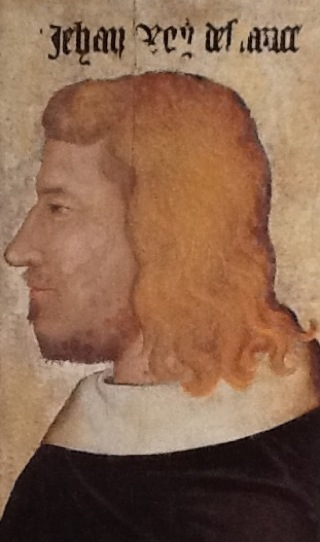 Most aristocrats who were imprisoned had several rooms in the Tower, with furniture, servants, a well-stocked larder and even members of their family, all at their own expense.
Most of the towers around the walls have at one time functioned as prison chambers.
Prisoners had access to medical care, a barber and even a solicitor, and an allowance for food, fuel and candles. 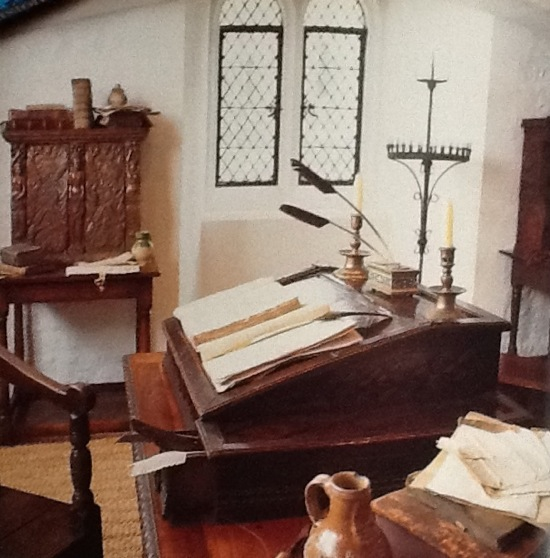 During Sir Walter Raleigh's long imprisonment (1603 to1616) in the Bloody Tower it was partitioned to provide space for his family and servants.
This is how his room may have looked.

He conducted experiments in his own still-house in the Tower Gardens,and had a library of over 500 books.

Many other prisoners wrote and studied in the Tower.
In 1485 Lewis Caerlon, physician to the deposed royal family of Edward V, was arrested on suspicion of disloyalty.
His notebook contains tables for solar and lunar eclipses, recorded during his imprisonment. 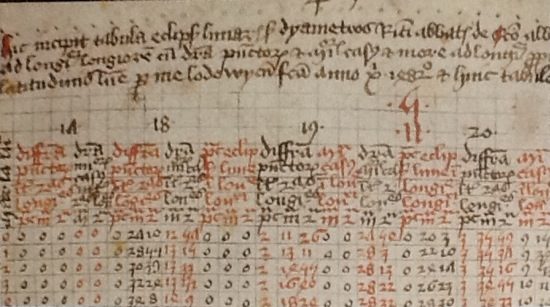 Henry Perry, 9th Earl of Northumberland, who was arrested on suspicion of complicity in the Gunpowder Plot of 1605, was known as the 'Wizard Earl'.
He was a scientist with a particular interest in astrology and alchemy.
He was provided with scientific instruments, a study, a library,a great chamber, two dining-rooms,and a still-house to conduct experiments. 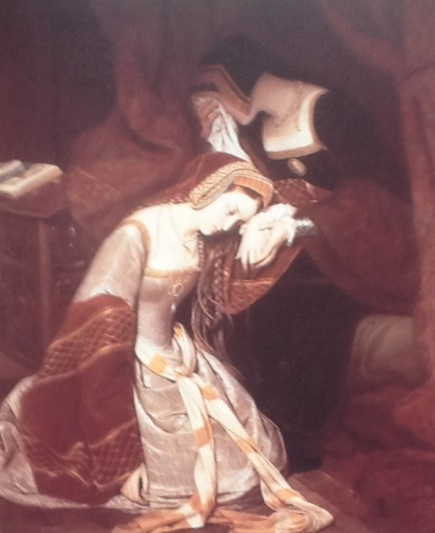 One of the Queens to be executed within the Tower was Ann Boleyn.
She was arrested in 1536, accused of adultery, incest, plotting the King's death and damaging his health.

Torture played a major part in obtaining confessions, and her own uncle was her judge.
She is buried in the Chapel Royal of St. Peter ad Vincula.
One of the warders told me that every year on the anniversary of her execution red roses are laid at the altar there; nobody knows where they come from.

From the 1300s, the Tower has been guarded by between 30 and 40 armed footmen paid to keep undesirables outside and and prisoners inside.
During the Tudor period, they were issued with uniforms like those of the Yeomen of the Guard(the royal bodyguard) and became established as Yeomen Warders, led by a Chief Yeoman Warder(or Porter) and a Yeoman(or Gentleman) Gaoler.

This is still the case today. 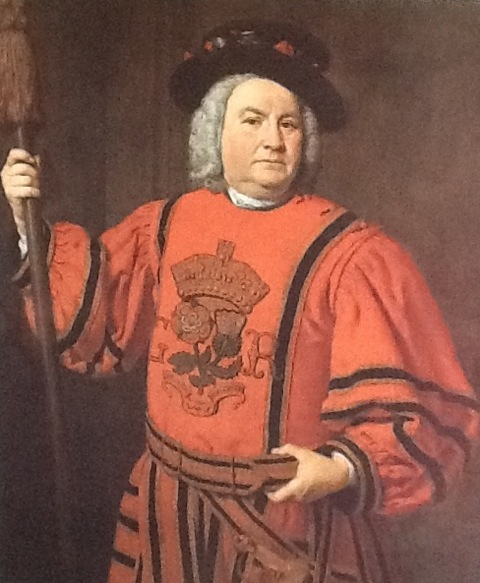 There have been several attempts at escape, not all successful.
In 1244,Gruffudd ap Llywelyn, the then Prince of Wales,tried to escape from the White Tower.
He tied together some sheets and jumped out of the window, but the sheets unravelled and he broke his neck in the fall.
The picture is from a 13th century account of the incident. 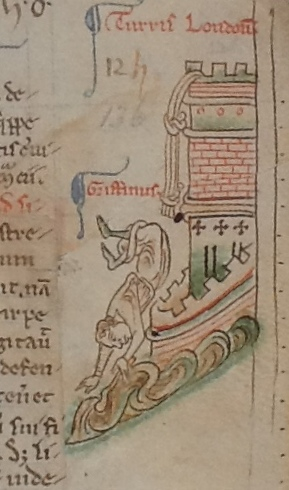 In 1322, a political prisoner, Lord Mortimer Wigmore, drugged his guards and broke out through the wall.
Much later, in 1716, the Earl of Nithsdale was helped by his wife, who disguised him as one of her friends.
She stayed in his cell after he had gone, carrying on a loud imaginary conversation until she was sure he had successfully escaped.
The painting is by Emily Mary Osborn(1834-93). 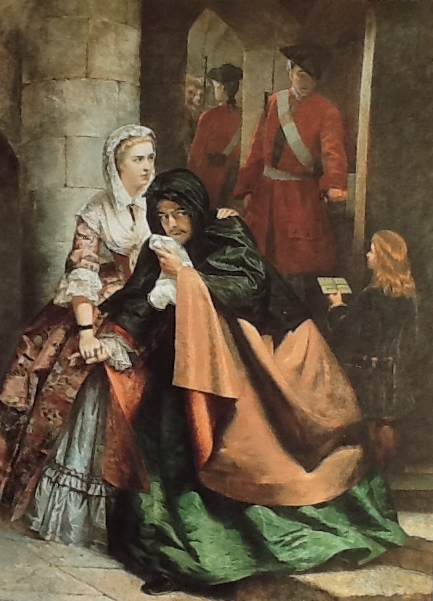 Torture has never been recognised in English law, and was only used within a short period of the Tower's history, from the 16th to the 17th century, often to obtain confessions or uncover plots against the throne or state.
It was not used simply as a punishment,and since the resultant statements were not trustworthy, from the mid-17th centuty onwards was effectively abandoned. 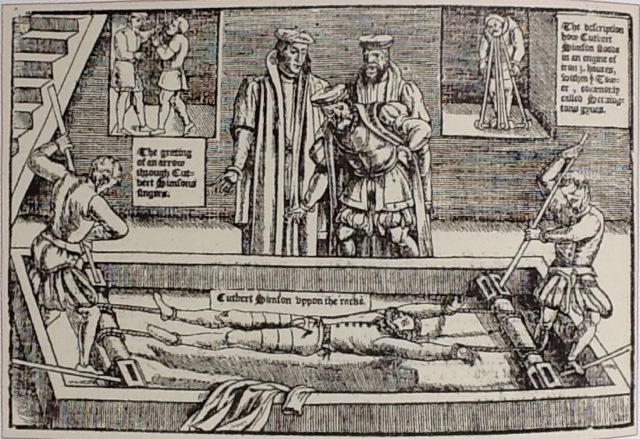 The chief instrument of torture at the Tower of London was the rack.
Although there was much speculation about its construction, very few witnesses were available.
Isaac Reed, the Shakespeare scholar, published in 1799 this description of the remains of a torture device he had seen in the stores of the Tower:
' It consists of a strong iron frame about 6 feet long, with 3 rollers of wood within it.
The middle one of these, which has iron teeth at each end, is governed by 2 stops of iron,and was, probably, that part of the machine which suspended the powers of the rest, when the unhappy sufferer was sufficiently strained by the cords etc. to begin confession.'
Obviously prisoners were stretched on the rack. 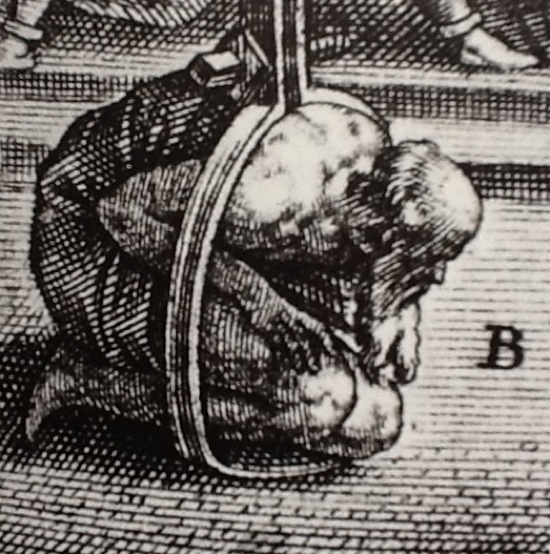 There were several other instruments of torture,some designed to hold the body in a contorted or compressed position.

Victims could reportedly only endure an hour of the Scavenger's Daughter, shown here leaning against a wall in the Tower.

Here it is in use. 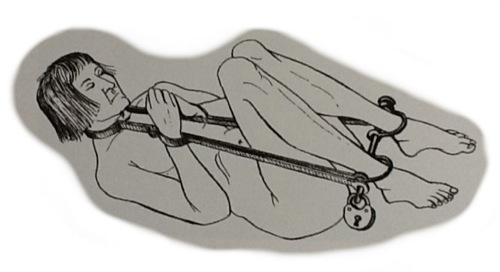 The manacles held the prisoner with his arms stretched above his head, and left him unable to use his hands for a long period,as a comparison of Guido Fawkes' signature before and after use displays. 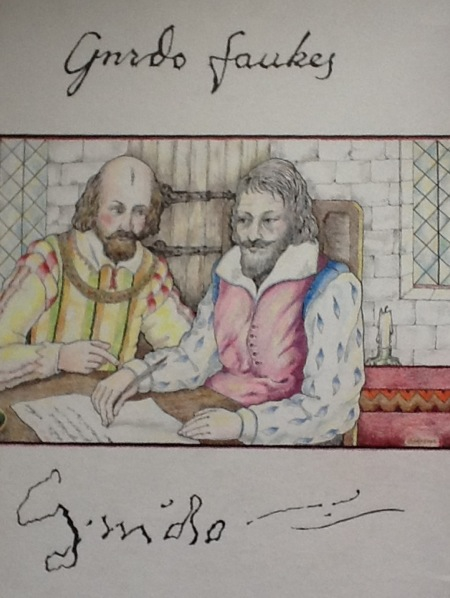 Over the centuries the Tower of London has fascinated and excited us.
So much has been concealed behind those ancient walls.
It is one of the most popular of sights for visitors: within its confines are the Crown Jewels, the magnificent Armoury, the ravens upon which, the legend tells us, the security of our state depends.
It has stood foursquare for centuries, and the carvings on its ancient walls are testimony to the people who have spent their last days there. 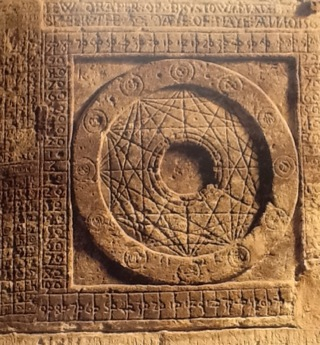 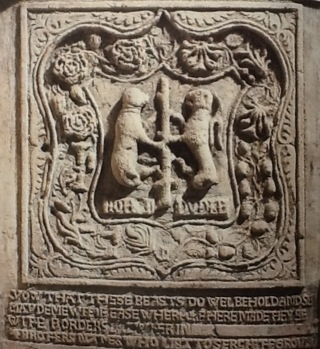 If you have not visited yet, put it on your list! Incidentally, the food there is very good!
< PrevNext >