William Heath Robinson (1872 - 1944) was a man with a unique capacity for the creation of weird mechanical contraptions, all of which were designed to solve everyday problems.
His formal training as an artist began at a small art school in North London, and later he studied at the Royal Academy.
His father and his two elder brothers were professional artists, and he himself was an excellent artist.
After graduation he attempted to live by landscape painting, always his first love, but was forced to find a more readily saleable form of art. 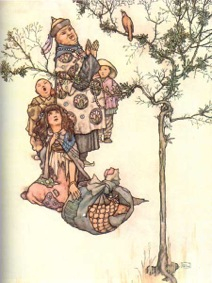 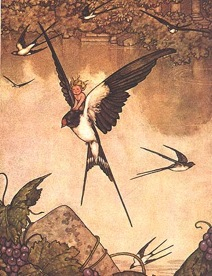 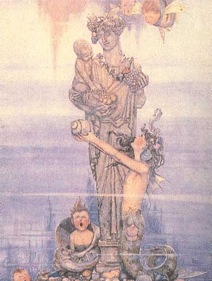 He became very successful as a book illustrator: he illustrated many children's classics, including The Arabian Nights, The Water Babies, and Hans Anderson's Fairy Tales, and was in demand for the design of magazine covers. 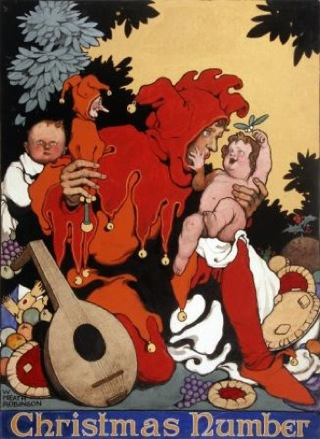 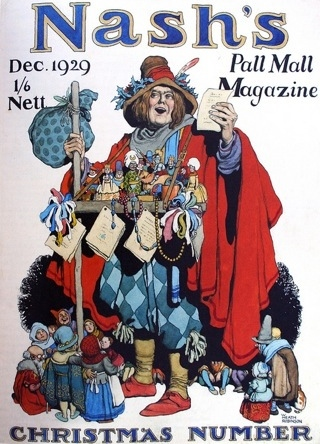 These are some of his early illustrations.
The use of colour is very subtle, but his black-and -white pictures had great charm. 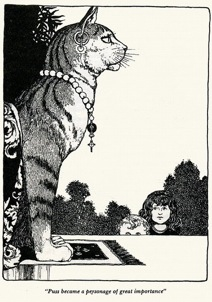 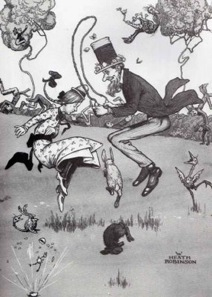 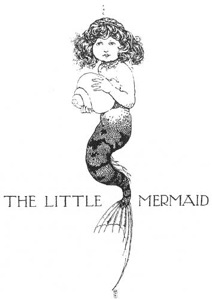 He found his real success with his inventive drawings of machinery.
In 1912 The Illustrated London News, reviewing his work, wrote of him as: "...The fantastic limner of the dust-heap, the lumber-room, the battered tin can,the strange bird and the stranger inhuman being, which contribute the material of his queer makeshift mechanical devices." 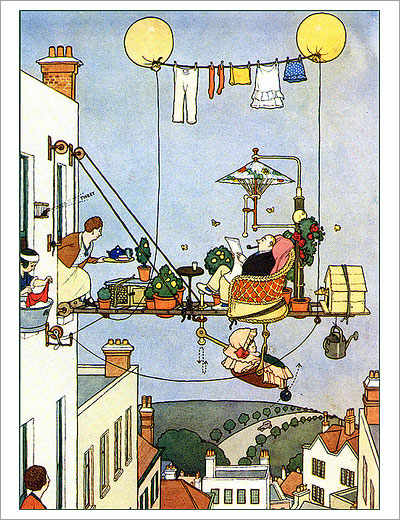 here is his portable garden for people in flats....

His early drawings of 'scientific inventions' were admired by many. H.G.Wells wrote to him, on December 31st 1914: "I have been ill and frightfully bored and the one thing I have wanted is a big album of your absurd beautiful drawings to turn over.
You give me a peculiar pleasure of the mind like nothing else in the world." 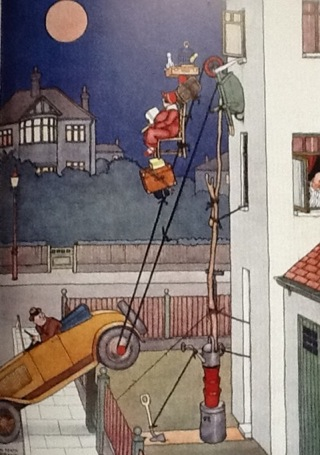 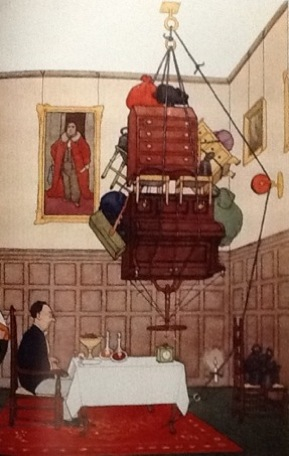 An eloping machine and a nutcracker!

During the First World War, Heath Robinson concentrated almost entirely on comedy, and collections of his anti-German cartoons,designed to raise morale by gently poking fun at the enemy, were published in 1915 and 1916.
At that time he received hundreds of letters from British troops at the front, suggesting different devices, some of which he did adopt. 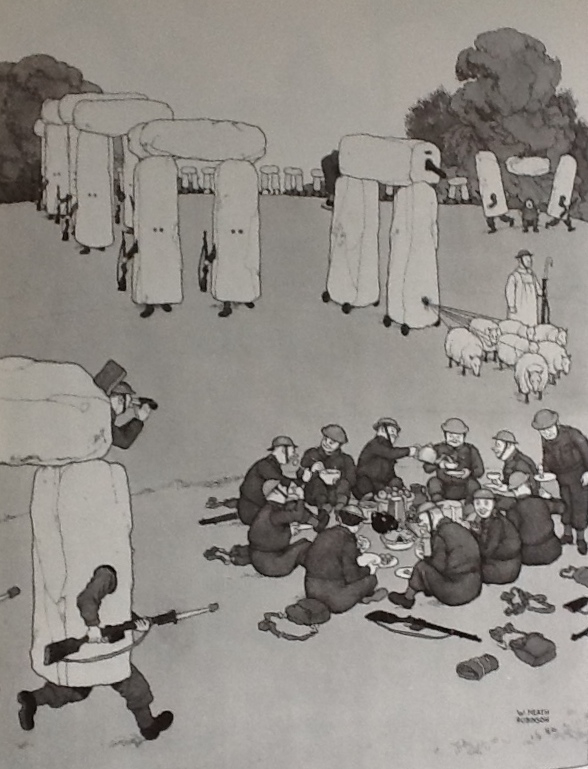 He wrote,"The much-advertised frightfulness and efficiency of the Germany gave me one of the best opportunities I ever enjoyed."
This is how to learn the goose-step! 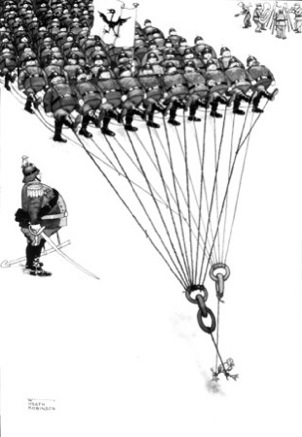 During the 1920s he was invited by a long succession of commercial firms to illustrate and imaginatively elaborate their manufacturing processes.
Among his employers were Swiss Roll bakers, confectioners, coal mines, brewers, marmalade makers,and oil companies, and he was delighted with the success of his drawings.
He wrote, "Nothing pleased them more than to see that which had held them so tyrannically treated with levity." 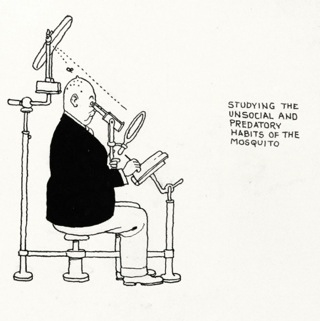 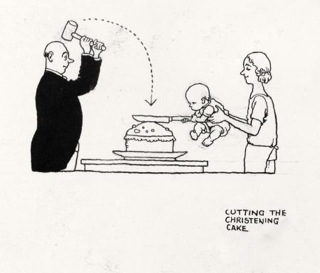 In 1934, now a famous and loved character, he was asked to design his own house -"The Gadgets" - for the Ideal Homes Exhibition. 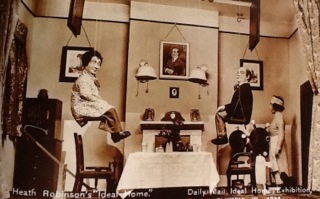 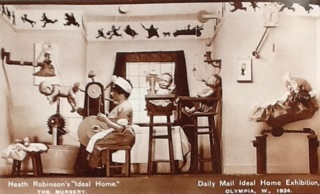 In 1938 he appeared on BBC Television to demonstrate his wonderful Pea-splitting machine.
Among his contraptions have been an Artificial teeth tester, an Oxtail Soup-maker, a machine for Stiltonising Cheese, American Barb-trousers, a Sandpaper Chute for removing the shine from blue serge trousers,and the Cold Feet method for straightening bent knees...

There seemed to be no end to his inventive flow. and his illustrarive work continued. 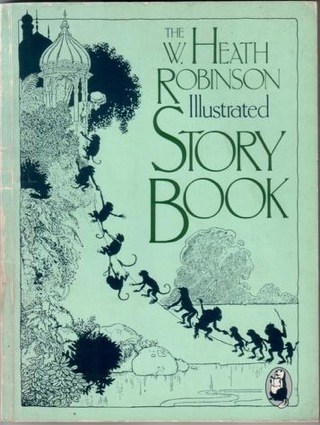 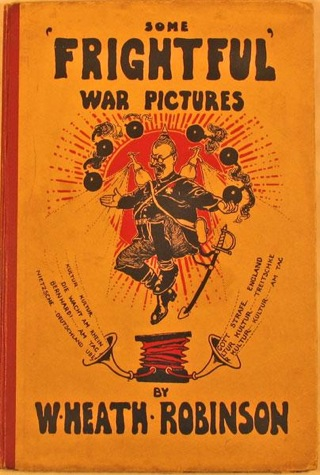 Here he is at work in his studio in 1936. He looks like a bank-clerk or an accountant, serious and reserved.
It is hard to imagine him producing such a great outpouring of witty, original, lively artwork. 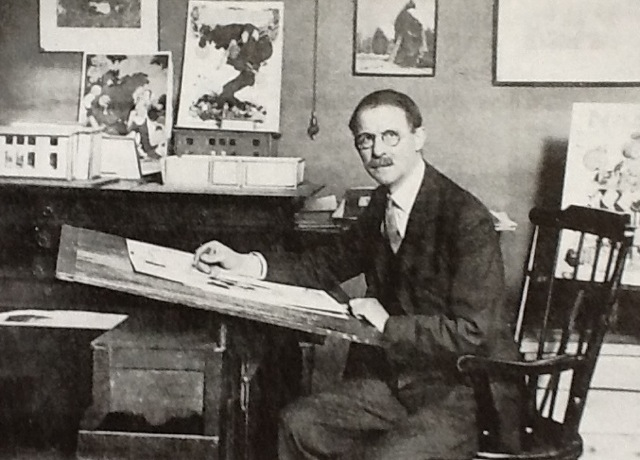 It always amused him that people genuinely believed in him as an inventor: his wife said that he was quite hopeless in the house, unable even to mend a fuse.
He wrote,"I was imagined by some to be a kind of ingenious mad-hatter, wandering about absent-mindedly, with my pockets full of knotted string, nails and pegs of wood, ready to invent anything at a moment's notice..."
He was a modest and unassuming man, and his name has passed into the English language.
Most people of my generation know what is meant by 'A Heath Robinson Contraption.'
My Dad would say of George, who was always able to find a way to overcome practical problems in the home, "He may have been a bit of a Heath Robinson, and used string and nails and odd bits of junk, but everything he made WORKED."

And he never spoke a truer word!
< PrevNext >

Absolutely fabulous! I love them all, my favourite is the nutcracker, but many follow closely behind...brilliant! Thank you for your articles, Queen Audrey! pu2xx

I love the portable garden! How much better than our Sky discs!
#1 Mary Macdonald 2012-08-18 01:19
Absolutely fabulous! I love them all, my favourite is the nutcracker, but many follow closely behind...brilli ant! Thank you for your articles, Queen Audrey! pu2xx
Refresh comments list