We spent several weeks, many years ago, either camping or staying with family in Cornwall, and always thought it one of the loveliest of counties.
George's brother was a forester, and was responsible at one time for private and state-owned woodland in the Clovelly area. 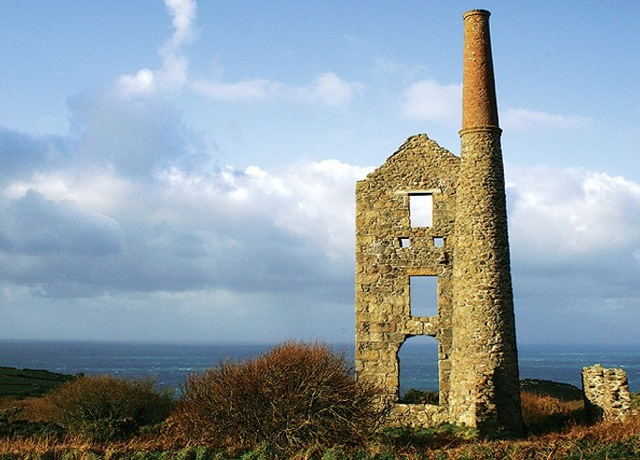 Scattered about the Cornish countryside are unique ruined buildings, quite unlike anything seen anywhere else in the country.
They are sometimes in twos or threes, and look like ancient mini-castles with tall chimney-stacks pointing to the sky. 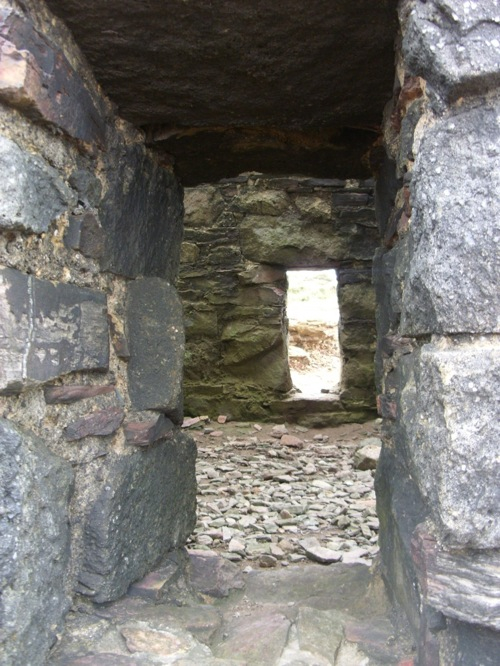 You can walk into all that remains, eat your lunch and gaze out at the sea.....

These strange, interesting derelict buildings are all that is left of the tin and copper mining industry for which Cornwall was once famous.
In the nineteenth century Cornwall was the foremost name in the mining world; there are more engine-houses and other mining remains here in the south-western corner of England than anywhere else in the world. 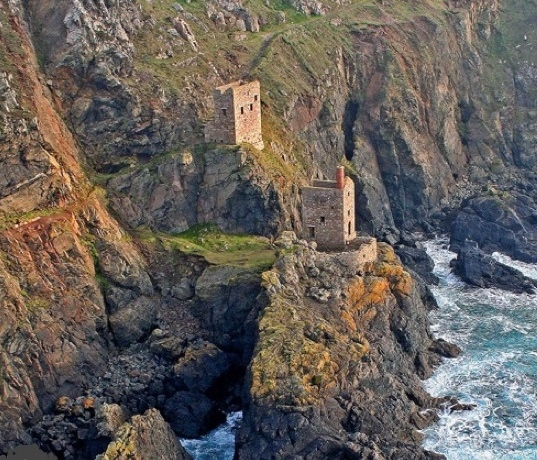 In fact, the Cornish mining industry can claim great antiquity.
Artefacts found on tin sites have been identified by archaeologists as from the early Bronze Age (2100 to1500 B.C.)and finds from the main tin-producing localities from Dartmoor to Land's End show that from 1500 B.C. tin was continually in production.

There was a well-established tin trade between Cornwall and the Mediterranean by the 4th century B.C.
In the 1st century B.C. Diodorus Siculus wrote about the nature and importance of Cornwall's tin trade.
He describes the Cornish as friendly and civilised, due to contact with foreign merchants.
He refers to their skill in dressing and smelting the concentrate, & goes on to describe how they conveyed the metallic tin to an off-shore island, called Ictis. 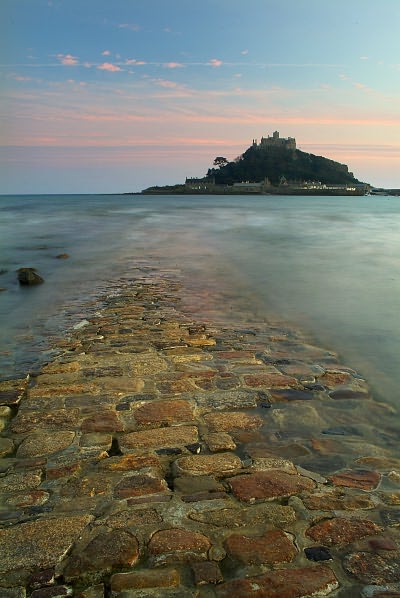 The island, presumed to be St. Michael's Mount, could only be reached at ebb tide.
The tin was carried across to Gaul and thence on horseback to the mouth of the Rhone, where Marseilles is now located.
Several different methods of extracting tin were used over the centuries; in the earliest times the tinners washed away waste material and used a 'blowing house' to smelt the resulting tin oxide into 'white tin', usually smelting twice.

By the 16th century, most mining was underground, with shafts for ventilation,access and removal of ore.
The mine captain organised all aspects of the mine.
He ensured that the mine was drained, ventilated and well supported.
The miners used pickaxes, sharp at one end to peck, and flat-headed at the other to drive iron wedges into the rock to split it. 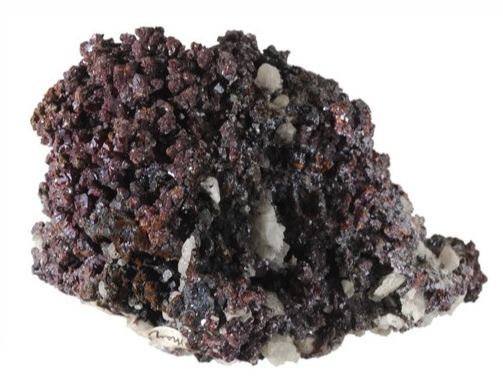 Here is a lump of tin ore.

Water was a major problem, and over the years, as the mines got deeper,all kinds of pumps and wheels were invented and tried, in order to avoid flooding.
The surface arrangements were labour-intensive.
The machinery, which included hoisting gear, pumps, water-wheels, sawmills,and a forge and carpenter's shop, often occupied a large area. 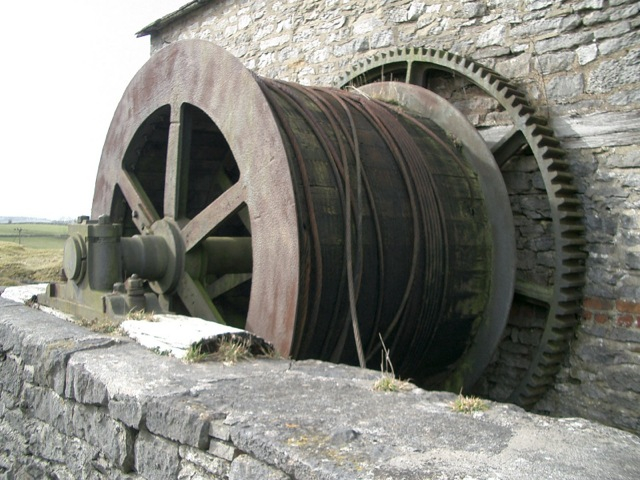 Some of the ruins still contain winding gear and other remnants of machinery.

By the 17th century Cornish miners had gained a reputation for expertise.
When James I wanted miners to develop the Scottish silver mines, he bypassed the German miners at Keswick, and brought Cornishmen an extra 500 miles; he wrote "The miners of our Dutchie of Cornwall are held to be the most experienced and most exercised in such works of all other our people." 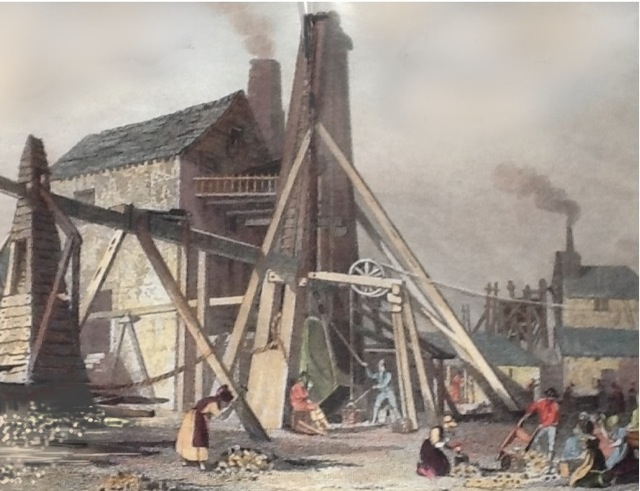 This is Dolcoath mine, one of the largest, in1831

During the 1800s more problems arose.
As the mines got deeper they got hotter, and ventilation became worse.
By the 1830s excesses of 100 degrees F were not uncommon.
Man-Engines were developed, powered by water-wheel, to carry the men up and down. 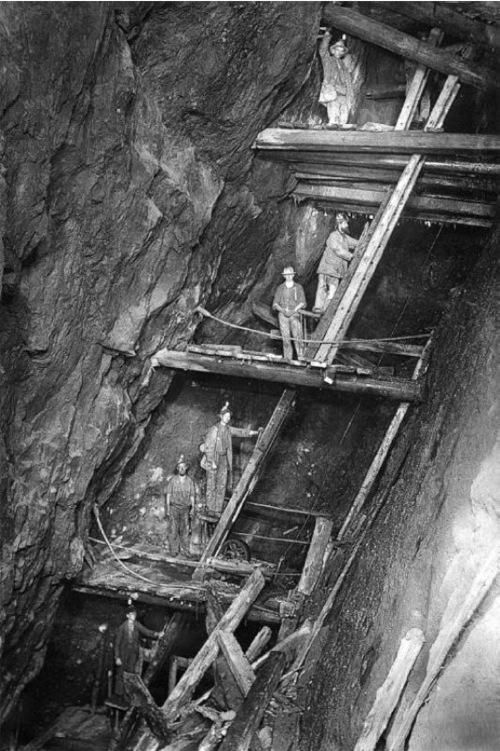 This one, at Dolcoath, carried men to and from depths of over 2000 feet.
In spite of all the difficulties, the industry struggled on into the 19th century.
It was the unpredictability of prices, especially post-war, and consequent periods of unemployment which caused the closing of many mines.

This painting of St.Just tin miners is by Harold C. Harvey. 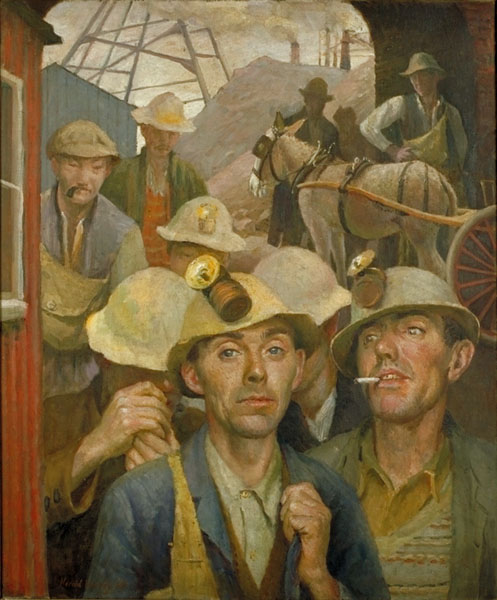 At its zenith, the Cornish mining industry was renowned world-wide.
Cornwall has produced tons of both tin and copper; between 1825 and 1856 one mine, Wheal(mine) Trenwith, St. Ives produced 13,080 tons.
The ruined engine-houses, which stand sometimes on the very edge of the cliffs, are witness to the effort of thousands of Cornish miners in the past, a traditional way of working which has all but disappeared, although there are still plans to open mines; in 1999 South Crofty was purchased with a view to re-opening. 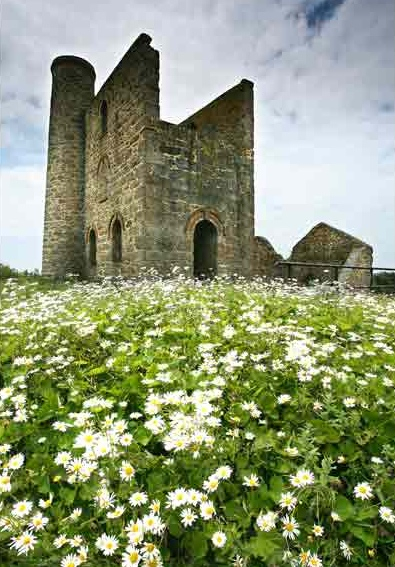