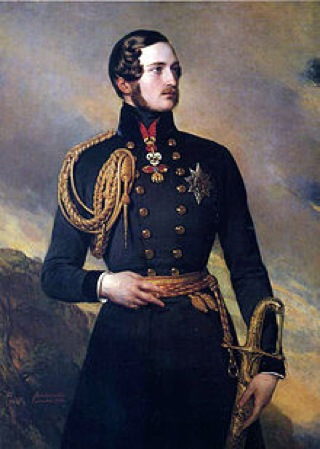 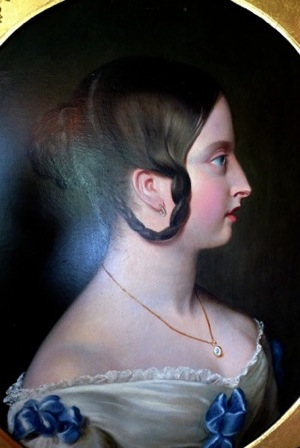 Victoria and Albert had nine children, and together set out to provide for them a warm family life, a loving relationship with their parents, a healthy life-style and a good education.

The children were all lively and at times difficult to handle, but grew up well; their parents, in spite of the heavy responsibilities they bore, spent far more time with them than was common at the time.
Most evenings were spent in play and song; Albert would have a child on each knee and gather the others around him, and he would practice magic tricks, and tell stories to entertain them.
Sadly, he died young, and the youngest of the family had to live with a broken, grief-stricken widow, who for years opted out of the parenting duties she had planned with him.
However, for several years the Royal children enjoyed a varied and affectionate upbringing.

But let us begin at the beginning. The very beginning, before the children were born.... 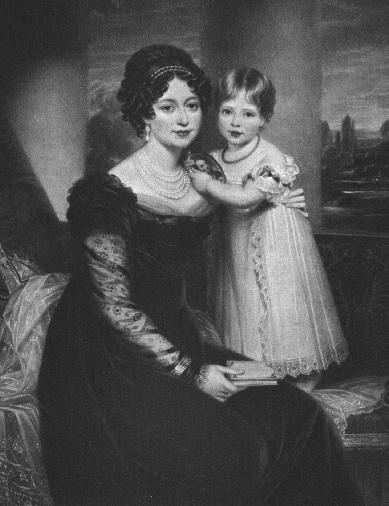 This is Victoria with her mother.
Victoria always said she had a miserable childhood.
Certainly her circumstances were not easy.
Her german mother, the Duchess of Kent, widowed after two years and with an eight month old baby,was housed in a suite of rooms in Kensington Palace with a limited allowance.
She was in a foreign country, with no adviser, struggling with her dead husband's creditors, yet decided to stay in England and bring her daughter up as an Englishwoman--luckily for us, as it turned out.
The rooms were dark and not particularly well-furnished, and the young Victoria led an over- protected and quite restricted life, but she was a lively, spirited child, and did not allow herself to be overcome by her circumstances, although her dolls were her best friends. 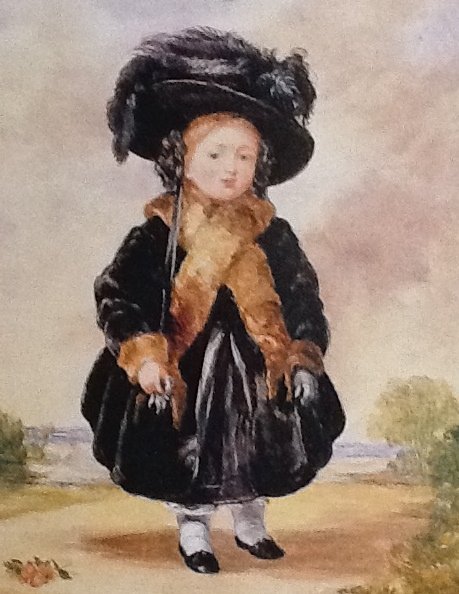 The duchess had great ( perhaps mistaken) faith in the governess she had brought from Amorbach to teach her elder daughter (from her first marriage).
She put Lehzen in charge of the whole of Victoria's education,except Latin and Religious Instruction, which was given to a liberal evangelical clergyman, the Rev. George Davis.
The result was not as she had hoped.
Victoria had a flair for languages and spoke German with Lehzen, but otherwise her education was narrow and prejudiced.

Part of the teaching was given by reading aloud, and the child was often bored.
Victoria could twist the Rev. Davis round her lttle finger, and shamelessly did so.
Although the duchess spent all she could on Victoria's education, endeavouring to make her an accomplished young lady, her daughter was left with a good singing voice, a talent for sketching, a love of dancing and a pure English accent.

In later years Victoria felt her lack of education and was determined that her children should never suffer in the same way. 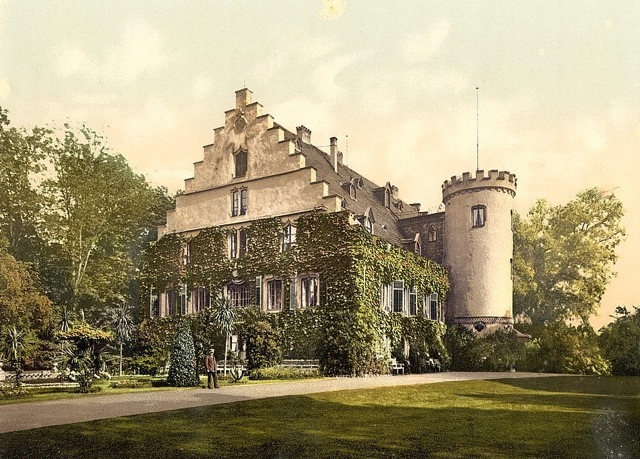 Albert grew up in Colberg.
He was three months younger than Victoria,his first cousin.
They were both brought into the world by the same obstetrician.
Victoria spent her life searching for a father-figure; Albert, whose mother was divorced from his father when he was three, felt her loss and named one of his children after her.
Albert had an excellent education, with science and mathematics, Latin, history and literature: the two brothers were taught by a graduate of the University of Munich.
Their father was a bully and often neglected his boys for his mistresses; Albert was never happier than when he was at Rosenau, a little hunting-lodge in the country,which he called "the paradise of our childhood." 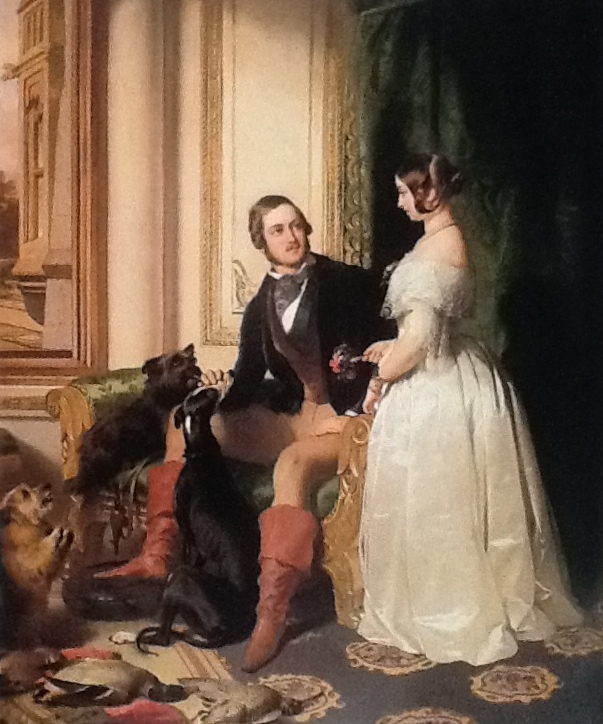 When, in May,1840, Victoria knew that she was pregnant, she was at first alarmed.
She wrote,"Childbirth is the only thing I dread."
In an attempt to divert her, Albert tried to engage her interest in the child's upbringing, and in this he was very successful; both of them were anxious, for their own reasons, to see that their children were not only well-educated but also befriended and loved.
They particularly wanted their children to enjoy their parents' company, as much as state affairs would allow.
It must be said that in this they succeeded; in fact, the royal children were far luckier than many of their contemporaries, and grew up looking to their parents for advice.
In 1840 Victoria and Albert knew absolutely nothing about children, but they now began to write down their plans.
They divided the day into hours of play, work and relaxation, and decided to choose a lady of rank,"well-educated and of irreproachable character" to oversee the nursery.
They emphasized that only "those who are good and pure, who will teach by living example" should be placed about their children. 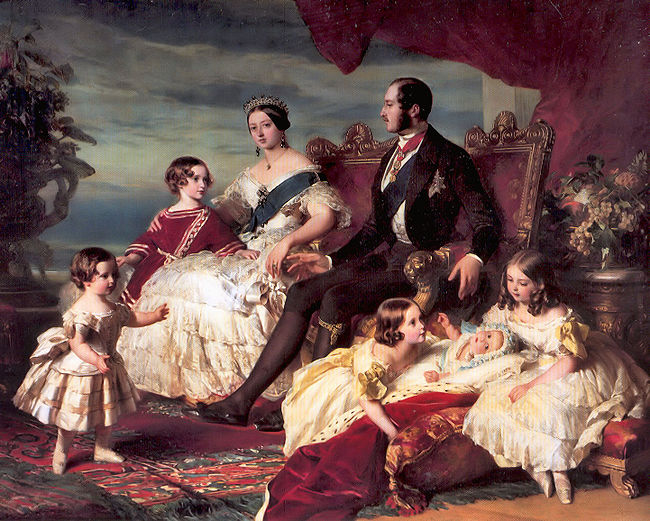 In fact this was easier said than done, and at first mistakes were made, but in 1842 they appointed Sarah Spencer, wife of Lord Lyttelton, who was conscientious to a fault, and dearly loved her charges.
Every single night she wrote a full report on the children, facts about health taking up the greatest part.
Running noses, gripe and rashes were all 'dosed,' and weekly castor oil was administered.
Diet was high in starch and low in protein, but the children seemed to flourish.
As toddlers they ate simple food, boiled beef and carrots followed by plain rice or semolina pudding.
In the early days the royal children, it seems, were not easily controlled.
They were all very high-spirited; they were not very obedient, either.
When staying in the Royal Pavilion at Brighton, although she knew that it was forbidden to run alone on to the terrace, Vicky defied orders and narrowly missed falling through the balustrade, which had to be wired up like a cage!
The Prince of Wales had dreadful rages, screamed, pulled his sisters' hair and scratched their faces, and snatched their toys.
Lady Lyttelton remained calm and handled the children without losing her affection for them. 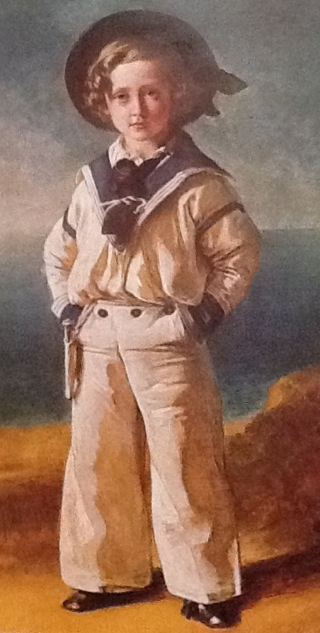 It is hard to believe that this was a naughty boy!

The whole family would spend time at Osborne House and Balmoral, where there were modern lavatories and bathrooms and running water.
There are only two recordings of infectious disease, measles in 1853 and a mild form of scarlet fever in 1855.
To raise nine children to adulthood was to beat all the statistics, and it was due in part to Albert's organisation of the nursery, which was run on somewhat spartan lines, with cold baths,open windows all year round and small fires.
In fact,Vicky suffered from painful chilblains...
In two years(1842-1844) Lady Lyttelton's charges doubled in number.
She now had four babies under her care.
Nightly she would pray to be given guidance.
Her aims for the royal children were clear: she wanted them always to tell the truth, to be unselfish and obedient, to love God, their parents and each other.
She prayed unselfconsciously with the children and in consequence they thought nothing of kneeling on the spot to give thanks for escape from danger or for a gift received.
There were very few directions given to the governess by her royal employers, but one was very important indeed.
Any sign of pride must be checked immediately.
The children must never think that because of their royal birth they were superior to anyone else.
Rudeness to servants was to be severely punished.
In 1844 Queen Victoria wrote: " The children should be brought up as simply and in as domestic a way as possible that (not interfering with their lessons ) they should be as much as possible with their parents and learn to place the greatest confidence in them in all things." 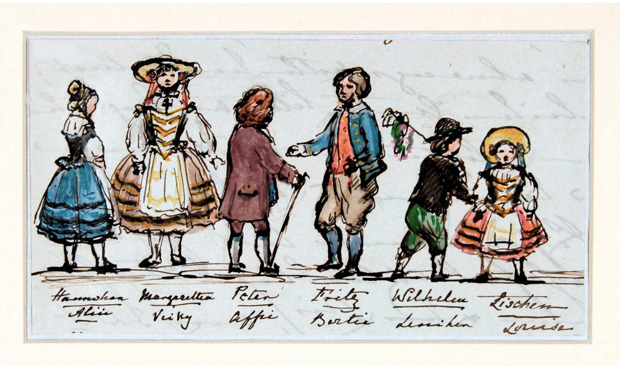 This is one of Victoria's sketches, of the children in fancy dress.

It was a very sad thing that Albert died when several of his children were very young, and that they therefore sorely missed his company and involvement.
Victoria was so shattered by his early death that in fact they lost her as a mother too.
Albert was a wonderful father.
He would often be seen in the nursery.
He would admire their paintings and join in their songs.
He took real interest in their achievements.
He would play with them, build towers of bricks, turn somersaults, teach them about flowers, collect shells, encourage them to ride or garden or swim.
Even the baby would enjoy the seawater at Osborne.
At Balmoral he would take them on the hills, teach them to ride their ponies, picnic with them in the fresh air.
After church on Sunday the whole family would be together: they would play battledore & shuttlecock in the long corridor at Windsor,or in winter they would skate; they would take the dogs for long walks,and in the evening Albert would read, or they would sing while one of their parents played.
They were, in fact, a very happy family.

In spite of Albert's bad press, which gave him a reputation as a strict and harsh father, the opposite is true; the fact is that he was a good and loving parent; together with Victoria he had worked out a plan for the upbringing of his children, and although they had so many state duties to perform they raised children who, even when discipline irked or rebellion caused disagreement, still loved and respected them; no mean feat when there were nine lively characters! 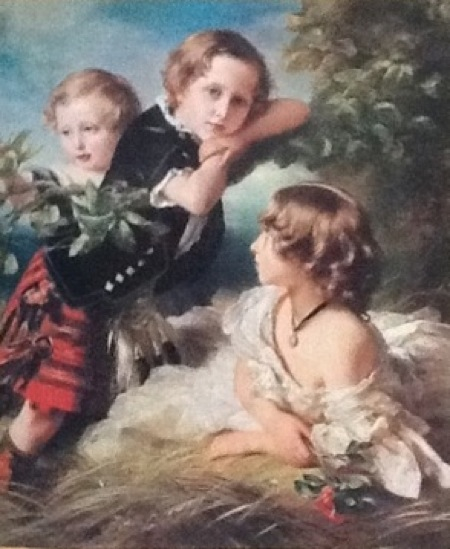