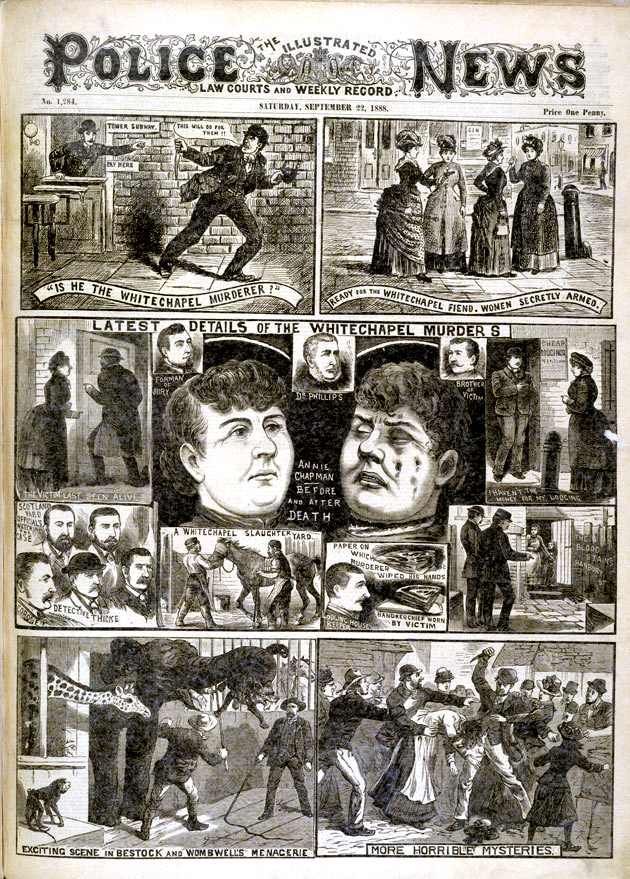 The 'Illustrated Police News' was published between 1864 and 1938, and in its time was sold in thousands.

People who could not read would pay a child to read it for them.
It was probably inspired by the much more respectable and accurate 'London Illustrated News', which needs no introduction.
First published in 1842, this beautifully illustrated paper is a great source of information for any social historian, and very quickly acquired an enormous readership.
But for the ordinary, often illiterate worker the exciting, dramatic illustrations which filled the pages of the so-called 'Penny Dreadfuls' had great attraction, perhaps relieving the drab, dark circumstances under which they struggled to survive. 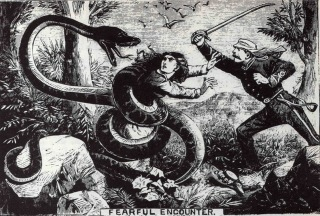 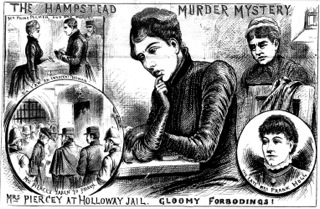 The cover of 'Police News' was intended to attract and capture the purchaser, and the title implied that the stories within were from accurate and official reports, although the many reports of 'fearful encounter(s) with boa constrictor' and 'deaths by sea monster' might introduce a slight element of doubt.
Fine detail ( dates, addresses, legal outcomes ) is usually conspicuous by its absence.
The illustrations are worthy of appreciation; they are so dramatic, so lively, so gruesome as to be in a class of their own.
The headlines were often X-rated, and the stories often full of grim detail. 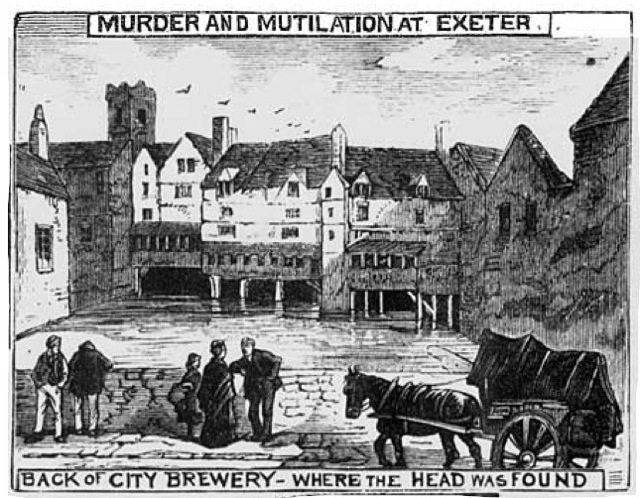 I thought you might like a taste of the contents of this periodical, the most popular of its time; perhaps the Sun of the late Victorian period?
I have chosen not to include any of the large number of pictures of beheaded, dismembered, garrotted and bloody corpses which are available.
It is perhaps significant that many of the wildest stories are from foreign lands, although local crimes such as those of Jack the Ripper were well reported, as the cover illustration ( above ) shows.
The first two are from Brussels and Greensburg, America respectively. 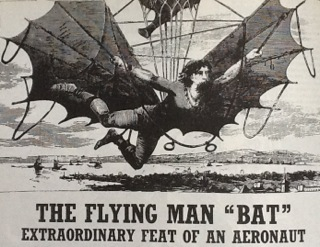 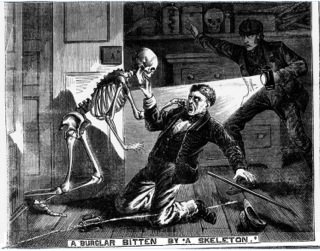 The flying man was attempting to glide over Brussels, but failed and fell on his face.
According to the article,"The mob grew furious at the disappointment, and tore to pieces the ballon that was to have played a subordinate part in the performance.
Stones were thrown about recklessly and a number of ladies were hurt.
There have been a number of arrests.
It is a pity Icarus escaped so well after causing so much mischief."

All of this has nothing to do with the picture, which is of an Englishman called "Bat" who many years before had succeeded in flying for twenty minutes.
The gentleman was, at the time of the article, deceased!

The "BURGLAR BITTEN BY A SKELETON" is a story stolen from the Philadelphia Medical Times.
A burglar broke into a physician's office and accidentally (!) got his hands between the jaws of a skeleton.
He 'uttered a faint shriek'.
The article continues: "When his companion turned the lantern towards him, and he beheld himself in the grim and grisly jaws of Death himself, he became so overcome by fear that he fainted,pulling the skeleton down upon himself and making so much noise that the Doctor discovered them and they were arrested."

The 'FEARFUL ADVENTURE WiTH A SHARK' is a story about 'a party of rustics' from New York, who set out on a fishing expedition.
One of the 'young ladies' caught a big fish.
She was so excited that she fell overboard.
Suddenly a shark appeared!
The article continues: "A thrill of horror ran through those in the boat.
The women screamed and the men grew pale with fright.
Not a moment was to be lost.
One of the gentlemen in the boat, who happened to have a revolver in his possession, had the presence of mind to fire at the finny monster, who at once made off.
Meanwhile, the young man had seized his intended, and they were both hauled into the boat by their friends and companions." 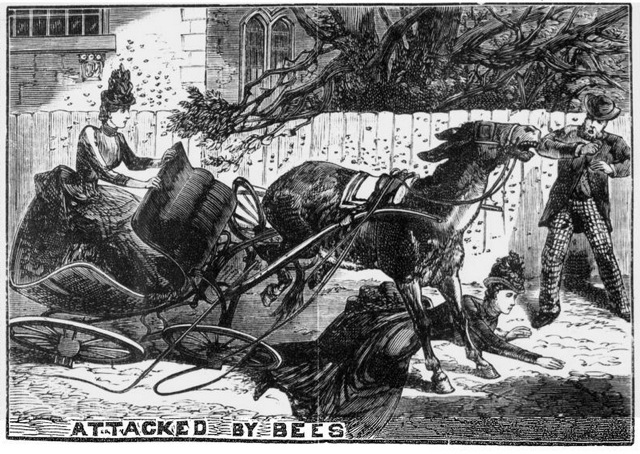 Here we have a dramatic picture from rural England, of two young ladies who were attacked by a swarm of bees. 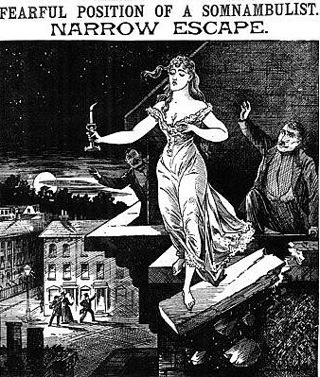 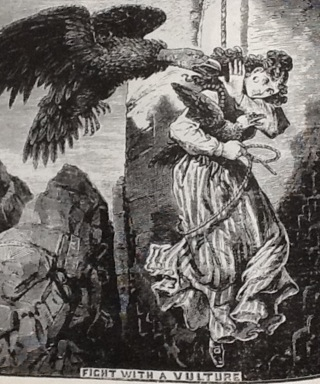 In these two articles we are told first of a young lady in South London who was sleepwalking to her death, rather improbably, until rescued in the nick of time.
The next story is from a printed book, published by Longmans.
It is offered as 'A really capital story of the Tyrolean Alps.'
The heroine, Elsa Stromminger, was 'the only daughter of a rich and influential man.'
When she was almost fourteen, a peasant discovered a vulture's nest with a young one, on a narrow mountain ledge.
Noone dared take it, but Elsa had no fear.
She was let down by a rope,and grasped the baby bird.
Suddenly, out of the sky swooped a great vulture, attacking her with beak and claws.
She bravely hung on, protecting her eyes, and was lowered to safety.
That is the happy end; but what of the young bird? Why take it from its parents?
The Police News does not tell us. It made a good picture.

You may have noticed that young ladies are often shown in positions of dire danger.
These beautiful bathers unusually met an octopus while bathing below English cliffs.
Fear not! They were saved..... 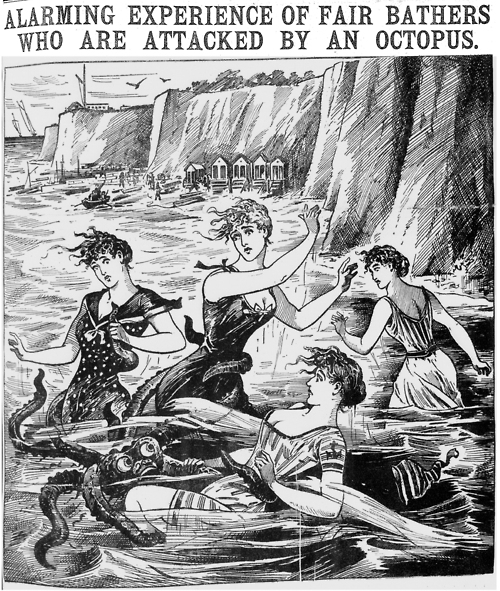 I thought I would end with a rather sad, gentle tale.
No violence, no blood.
The headline?

THE LAST MOMENTS OF A GORILLA
This is a story from Berlin.
The Director's favourite gorilla in the Zoological Gardens was at the last stage of a battle with a terminal disease.
The article describes her end.
"When the Director once more stooped over his favourite, Mafuka then put her arm round his neck, and for a while with her clear eyes had a deep glance at her protector.
Then she kissed him three times at short intervals, gently reclined on the couch, and once more shook hands with Schopf, by way of farewell, after many happy years together, and fell asleep,to wake no more." 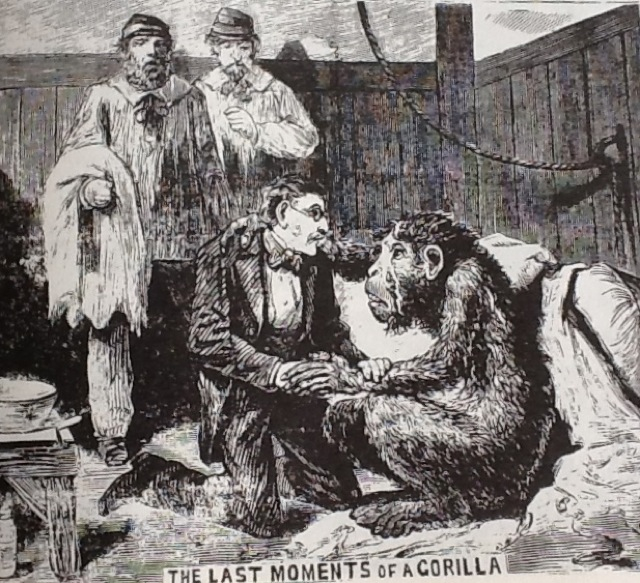