Personally, I have always avoided belonging to youth groups, particularly any which have a uniform.

For twenty years I was the only Governor of my local school who did not embrace the idea of little children in uniform.
I have always hoped to encourage children to be different, to be unique, to develop their individual capabilities, and then to use them to make the world a happier place.
There was no chance that my opinion about uniform would have any effect, so if harm could have been done by my views, it didn't happen! 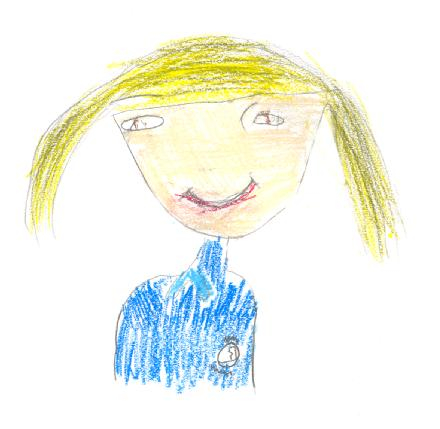 During World War Two, I patriotically joined the GTC, the Girls' Training Corps.
I was, as a member, a complete disaster!
We actually paraded and marched about, and during drill sessions I was always the only one facing the wrong way at the end. 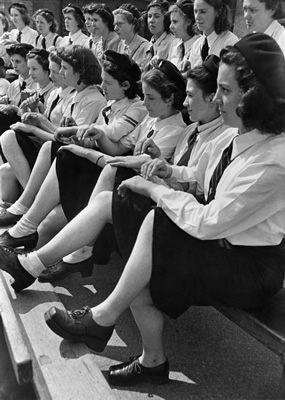 I think my Dad would have quite liked me to be a Girl Guide, but I managed to avoid this.
In the classroom I was fine, competent and happy; as a pack member I was a failure.
This doesnt mean that I dismiss the use of such groups for other people.
Many, many children flourish and have fun in Brownies and Girls Brigade; they learn all kinds of interesting things, working with others for example, and I know they love their badges. 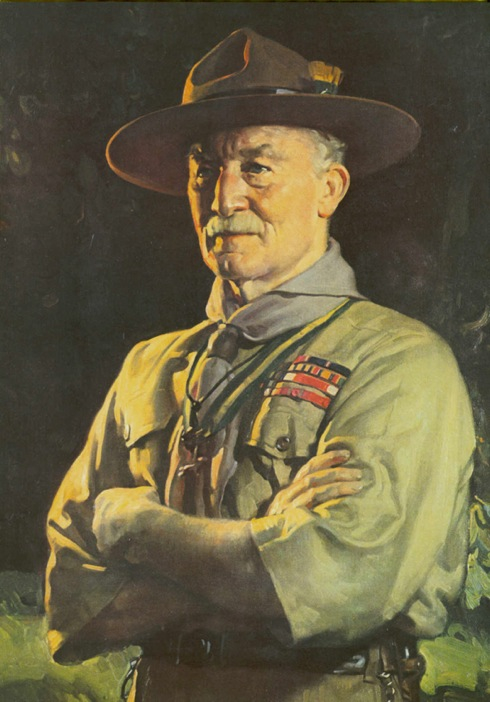 This article is about Robert Baden-Powell, and his wonderful book "Scouting for Boys : a Handbook for Instruction in Good Citizenship" and what it has done for thousands of eager, lively young lads through the years since the book first appeared early in 1908, in a six-part edition.

Nobody could have dreamed that it would become so popular; its publishing figures until after the Second World War were exceeded only by the Bible in the whole of the English-speaking world.
It received an instant and amazing response from parents and children alike..( by 1909 there were 107,000 boy scouts! ) 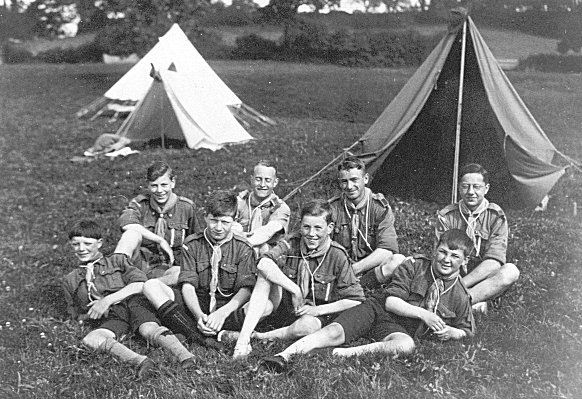 By the summer of the year in which it was published, Scouting for Boys was selling in thousands, and by the summer rapid plans had to be made to obtain some kind of control over the hundreds of self-constituted groups of boys and girls who, armed with their books, were setting out camping all over the country. 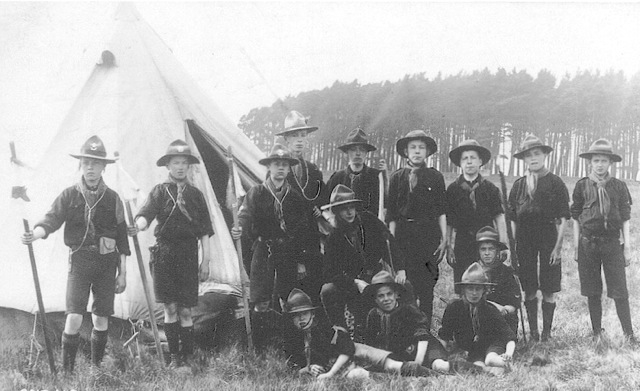 The rules and rituals of the Movement, its ' invented tradition', were actually got together in a few weeks.

Arthur Pearson, the Daily Express magnate, owned the printer, Horace Cox, and the tried and tested formula of the "Boys' Own Paper"( yarns and pictures and adventurous activities ) ensured success.
The book appeared at a time when many were beginning to experience wavering self-confidence in the Empire after the trauma of the Boer War.
Baden-Powell, one of the heroes of the siege of Mafeking, was a charismatic leader and the idea of boys following his example was irresistible. 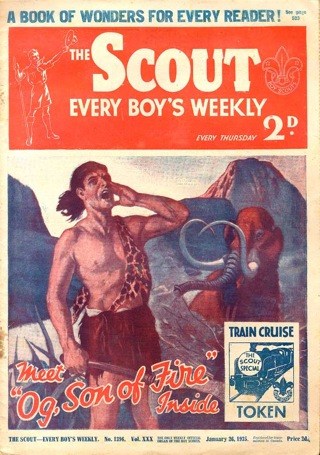 The Scouting Handbook was not the result of long-term planning.
It was a spontaneous idea which the public took to their hearts.
Baden-Powell wrote it with an old military dispatch-box at his elbow, full of collecred scraps of information; newspaper cuttings, pages torn from adventure books and travel writings, and other mementoes.
He used them, and of course stories and ideas from his own travels,to write the book, and even did some of the sketches himself.
It is in bite-sized chunks which are easily read, and is about ACTION!
It is a muddled mixture of ideas which appealed to hundreds of youngsters looking for excitement and purpose.

Baden-Powell continued to rework the book until the 1920s.
The most compelling attraction lay in the suggestion that boys could set things up for themselves, and that life, even in the suburbs, could be full of interest and adventure.
Boys could be useful, could defend and save the Empire. 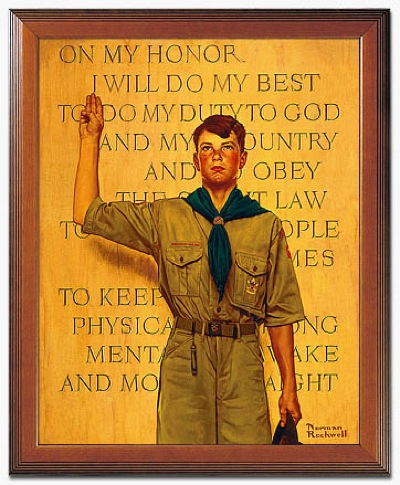 Since its beginning, the Scouting Movement has probably been the most successful and extensive of World movements.

It has involved almost 350 MILLION people across the globe, and exists in all save 5 or 6 of the countries in it.

Some of the ideas in the book are slightly unusual.
Some of the advice is perhaps doubtful.
No one can say it did not work!

Here are a few excerpts, typical of their time, from this fascinating book.... 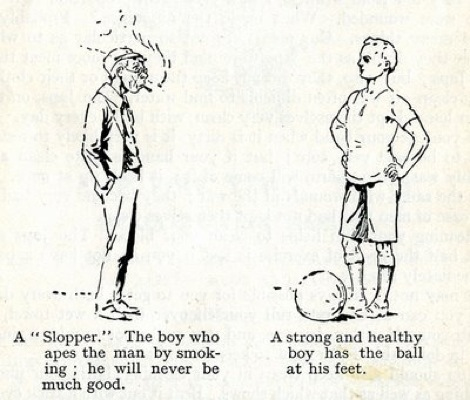 "A soft bed and too many blankets make a boy dream bad dreams, which weaken him.
Scouts breathe through the nose, not through the mouth; in this way they don't get thirsty; they don't get out of breath too quickly; they don't suck into their outsides all sorts of microbes or seeds of disease that are in the air, and they don't snore at night, and so give themselves away to the enemy. (What enemy?)

A man who is in the habit of drinking wine or spirits in strong doses every day is not the slightest use for scouting, and very little use for anything else.
The best scouts don't smoke because it weakens their eyesight; it sometimes makes them shaky or nervous, it spoils their noses for smelling ( which is of great importance at night ), and the glow of their pipe, or even the scent of tobacco carried on them at night gives them away to watchful enemies." 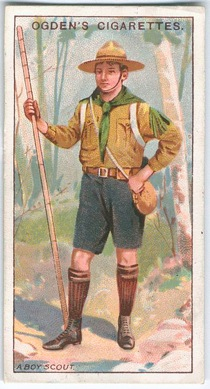 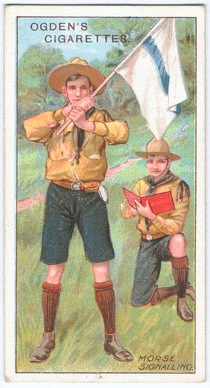 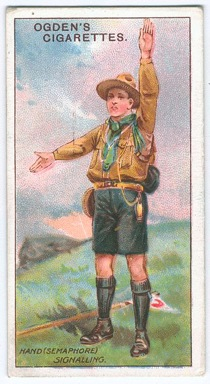 These cigarette cards, while showing the service of scouts to others, didnt exactly help the argument about smoking being bad for you! 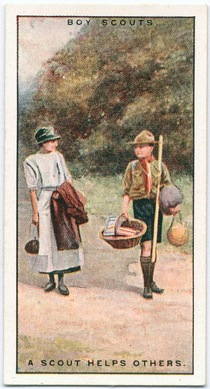 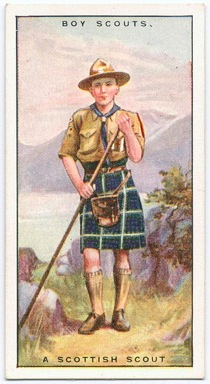 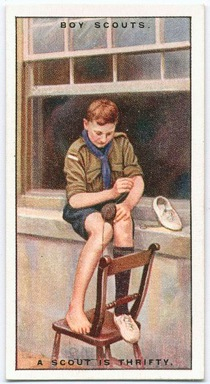 "It is surprising how much of the sole of the boot you can see when behind a person walking.
It is said that to wear out soles and heels equally is to give evidence of business capacity and honesty; to wear your heels down on the outside means you are a man of imagination and love of adventure; but heels worn down on the inside signify weakness and indecision of character." 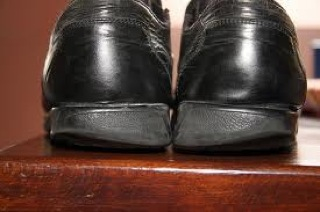 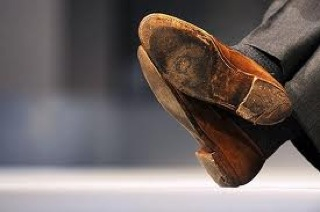 "Send scouts out for half an hour to look for, say, a brutish character, or a case of genteel poverty, etc.
The scout must be able on his return to describe the person accurately, and give the reasons which made him think the person was of the character he reports.
He should state how many other characters he passed on his search, such as silly, good-natured, deceitful, swaggering, wax-moustached, and so on, judging, of course, by their faces, their walk, their boots, hats, and clothing, etc." 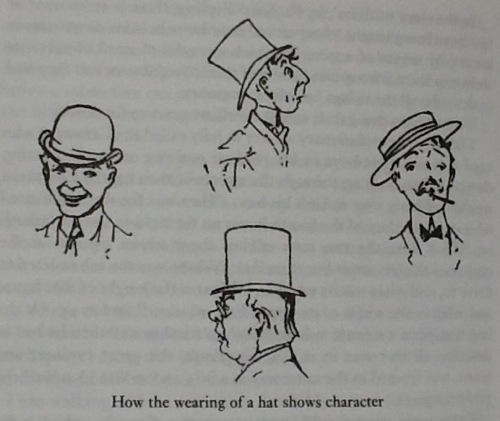 "It is said that you can tell a man's character from the way he wears his hat.
If it is slightly on one side,the wearer is good-natured.
If it is worn very much on one side, he is a swaggerer; if on the back of his head, he is bad at paying his debts; if worn straight on the top, he is probably honest but very dull." 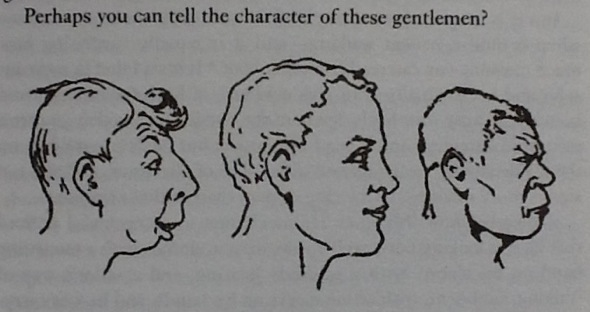 "I was once accused of mistrusting men with waxed moustaches.
Well, I do; it often means vanity and sometimes drink." [Did you, honestly, ever read such nonsense?!!!]

3 Useful knowledge for the scout (?)

"Scouts should know how to kill and cut up their cattle." 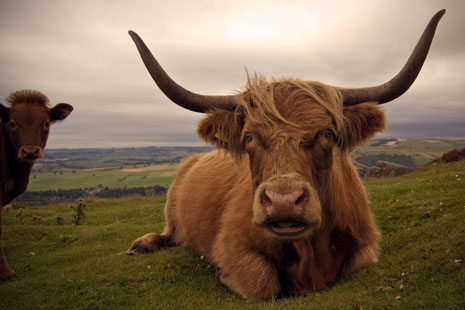 I shall not include all of this section, which is not at all pleasant to read, especially by someone who seldom eats meat and in any case leaves slaughtering to the abattoir!
I cannot understand why this information was considered essential in a book written for boys who would not be likely ever to have to kill a cow for Sunday dinner!

This section goes on to describe the gutting, skinning and dismembering of the "prey!"

There is, of course, very useful information in the book, which aims to make the young reader independent and self-sufficient.

"Every scout should know his exact personal measurement in the following details ( of which I give the average man's measure ): 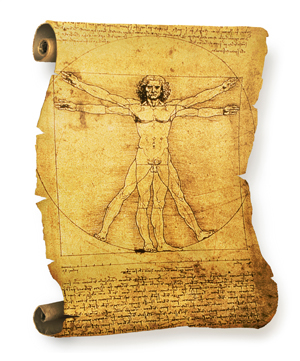 "It is useful to cut notches on your staff, showing such measurements as one inch, six inches, one foot, and one yard.
These you can measure off with a tape measure, and they may come in very useful."


"To find the South at any time of the day by the sun--hold your watch flat, face upwards, so that the sun shines on it.
Turn it round until the hour hand points at the sun.
Then, without moving the watch, lay a pencil across the face of the watch so that it rests on the centre of the dial and points out halfway between the figure XII and the hour hand.
The line given by that pencil wtll be the true south and north line." 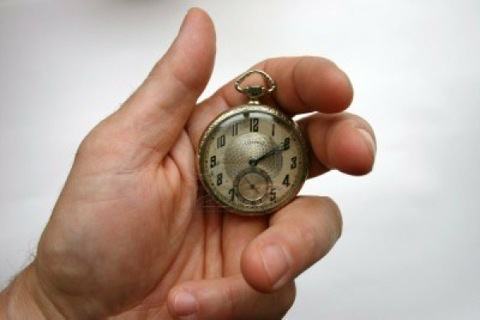 Scouts loved to sing and produce little dramas.
They were encouraged to be ever cheerful, to whistle and smile under duress.

The Scouts' Chorus was to be shouted on the march, or as applause at games and meetings.
I do not know what language this is in!

"Leader: Een gonyama -- gonyama
Chorus: Invooboo. Yah bobo! Yah bobo! Invooboo.
The meaning is:
Leader: He is a lion!
Chorus: Yes! He is better than that; he is a hippopotamus!"

The Scouts' Rally
To be shouted as a salute, or in a game
. "Leader: Be Prepared!
Chorus: Zing-a-Zing! Bom! Bom!" 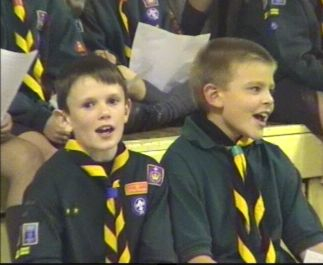 I confess that I remain unmoved....
BUT.....
There were games, stories, exercises in tracking, secret signs,and BADGES to be won and worn on the sleeve. 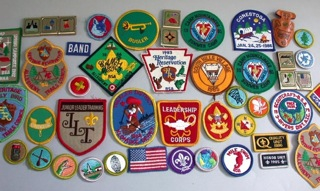 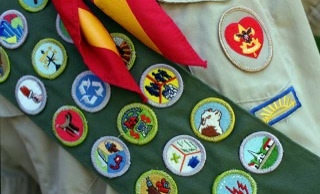 There was CAMPING!
Away from home, singing round a camp fire, cooking in the embers, orienteering, studying the stars, sleeping in a tent, walking in the woods at night....the joy of that I understand. 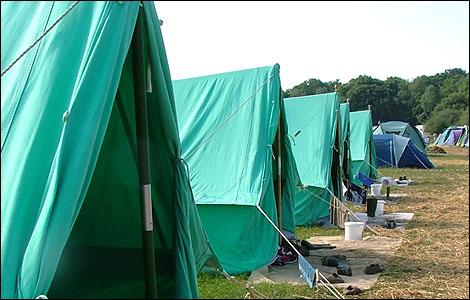 The very best thing about the movement was that all scouts were equal.
There was no distinction, either of class or culture.
And scouts were to be courteous, cheerful, curious, reliable.
With that I would never argue.

Scouts became a working, active part of society; they helped in many circumstances; in raising funds, in collecting waste, in helping others in wartime.
They proved that young people can be trusted with responsibility. 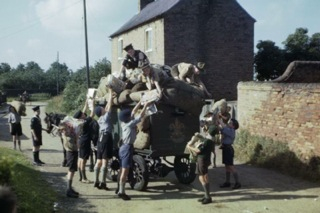 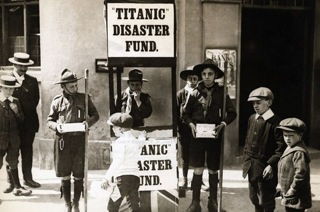 Over a hundred years ago, based on a book written impulsively, structured in a rush, born out of empirical ideals which are no longer relevant, the Scout Movement has triumphantly survived.
Still popular, it continues to appeal to modern computer-driven boys and girls, who are just as restless, just as anxious to escape the daily boring grind as ever their forebears were! 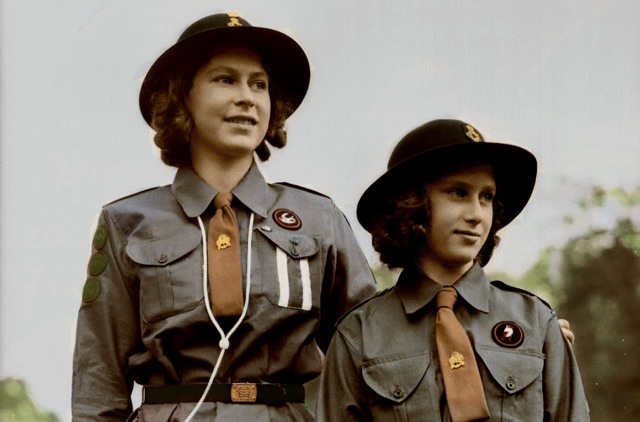 The Royal family took great interest in the movement.

Princess Elizabeth and Princess Margaret were both Brownies and Girl Guides, and somewhere among all my collection of 'interesting things' I have an old gramophone record.
It was made at a Scout Camp at which King George VI and hundreds of young boy scouts are singing together.
I saw a film of the camp, long ago, in black & white on Pathe News in the cinema, and when I hear the record, with hundreds of young voices heartily singing "Underneath the spreading Chestnut Tree," I remember seeing the King, making all the signs, joining in with the rest.
In his shirt sleeves, laughing at mistakes.
He is not shy and nervous as he so often seemed. He is a boy among boys.

There was something of Peter Pan in Baden-Powell.
This is one of his own sketches, showing the aims of a good scout... 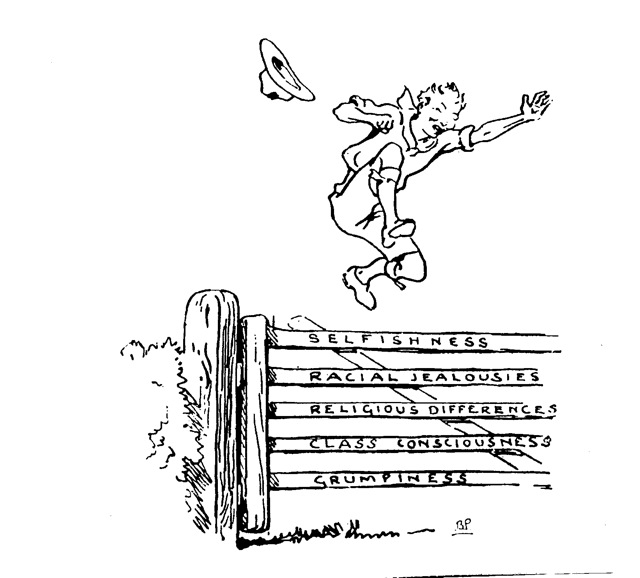