A Romantic View of Empire

I recently found a book on my shelves that I did not know I possessed.
This is not difficult, as there are so many!

It is a school history book, published in 1911 by Oxford, bound in red cloth with black impressed titles, and like many school text-books of the period is beautifully printed; the illustrations, both coloured and black&white, are of a high standard.
In fact, the coloured plates could well be framed, but the book is quite small, suitable for smaller hands and large classes.

I was most interested to discover that the book was written by a certain C.R.L.Fletcher ( not previously known to me ) and RUDYARD KIPLING!

I had not heard of Kipling as a historian , although of course I had met with his poetry.
As I was born and brought up in Brighton, I had seen his house at Rottingdean. 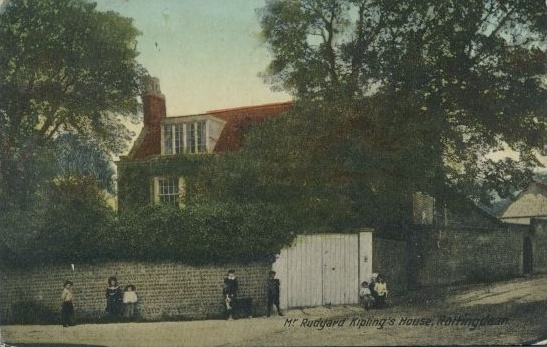 I thought his poetry was rather 'jingly' but realise now that he was later offered( and refused ) both a knighthood and the position of Poet Laureate, and in 1907 had received the Nobel Prize for literature; in fact, was the youngest poet ever to be so honoured.
Personally, I would not have ranked his poetic work at that level, but he was certainly very popular, and such classics as The Jungle Book and The Just So Stories are still well read. 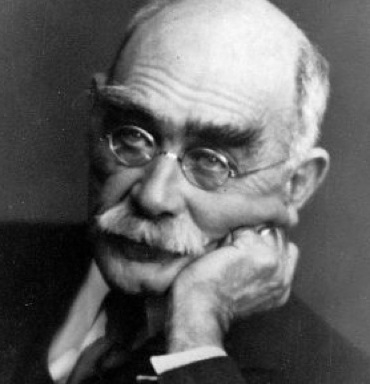 However, this text- book is actually NOT, as it is entitled, a School HISTORY.
It is Rudyard's personal perception of history from the empirical position of Britain.
First, what was the aim of this little book?
It is clearly expressed in the extremely brief Preface; 'This Book is written for all boys and girls who are interested in the story of Great Britain and her Empire.'

It is not a History book, but a platform for Kipling's attitudes and opinions.
It is his interpretation of British history, and sets out to describe, in simple terms, the growth of our country from very early days to Britain's importance and influence in the early years of the twentieth century.
It is, first of all, a Romance, full of battles with foreigners who are always shown as inferior and unfortunate in their birth, and downright libellous dismissals of past British kings, as well as compliments for some of the less moral of our leaders.

But lets begin with the pictures - always the first stop for children.
The illustrations are colourful and exciting, but not always historically accurate. 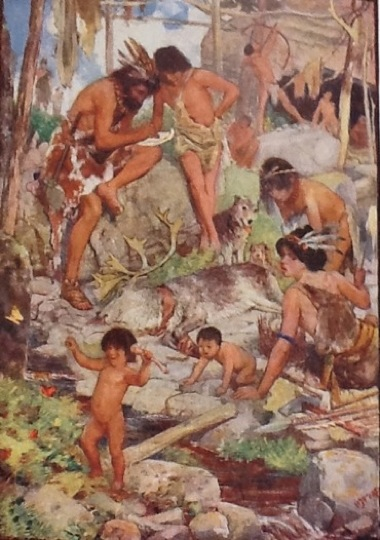 Here we have a scene showing an early 'caveman family.'
We see beautiful children playing by a stream.
One is chasing a butterfly ( Rudyard informs us that 'the babies toddled about after butterflies, larger and brighter than the peacocks and tortoiseshells of today' ); a father, bearded and handsome, is teaching his teenage son.
There is blue sky and fresh green grass, and it seems to be a bank holiday.
It is a highly imaginative view!
All the coloured pictures are untitled; usually there is fighting going on, and sometimes it is difficult to know what particular battle is being illustrated; in all of them the winning side is undoubtedly British. 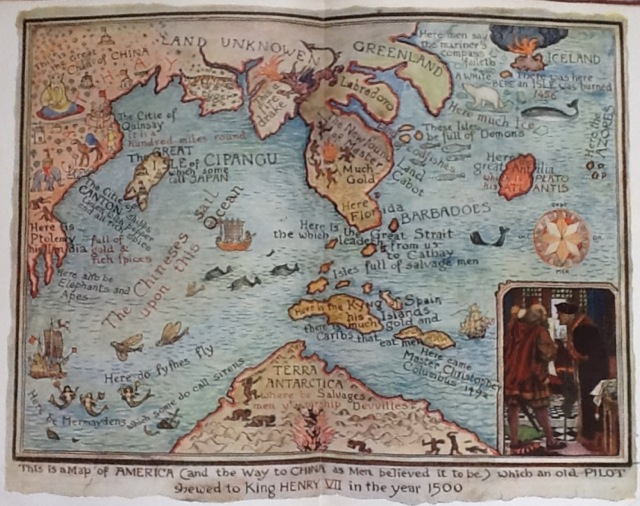 Here is what purports to be a reproduction of a map given to HenryVII in 1500. 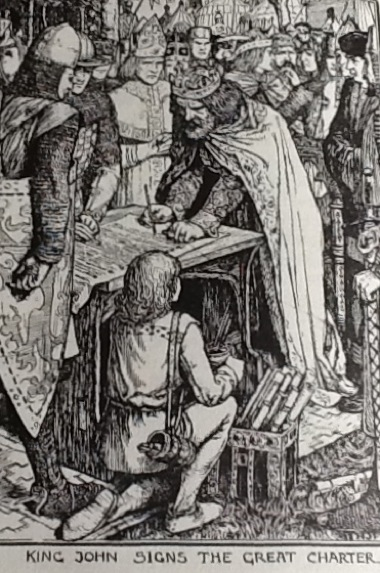 The Magna Carta is Signed

All the black & white pictures are beautifully drawn.

The text is simplistic and very authoritative.
Here are some quotes from the book about important people:
1 Richard the Lionheart:
'Of his father's really great qualities he had very few.
He had been spoilt as a child, and he remained a great, jolly, impatient child till his death.' 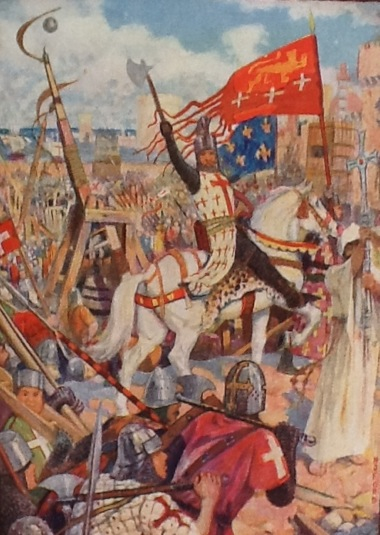 2 Cromwell:
' Cromwell was a man of the most lofty character, and so were many of his associates.
They were also great patriots and great Englishmen.'

3 Queen Anne:
'She herself was almost the stupidest woman in her dominions...'

4 George I
'a dull, honest, heavy fellow....he cared nothing for England, only for his native Hanover.'

The comments upon people of different cultures and lifestyles are equally scathing:

5 Rudyard obviously did not approve of monasteries:
'The friars were the last offshoot of the dying tree of monkery.
Wise people ( like Mr. Kipling? ) began to see that a monk who shut himself up in a monastery might no doubt save his own soul, but could do little for the souls of other people.'

Neither did he approve of the slow disintegration of the Empire.
He had good things to say about Rhodesia, where 'natives everywhere welcome the mercy and justice of our rule': but the West Indies were not so well described. He wrote:

6 'The prosperity of the West Indies, once our richest possession, has very largely declined since slavery was abolished in 1833.
The population is mainly black, descended from slaves imported in previous centuries, or of mixed black and white race; lazy, vicious and incapable of any serious improvement, or of work except under compulsion.
In such a climate a few bananas will sustain the life of a negro quite sufficiently; why should he work to get more than this?
He is quite happy and quite useless, and spends any extra wages which he may earn upon finery.'

There are many poems in the book, all by the author, and they do not add fact to what perhaps should be a less imaginative and prejudiced text. 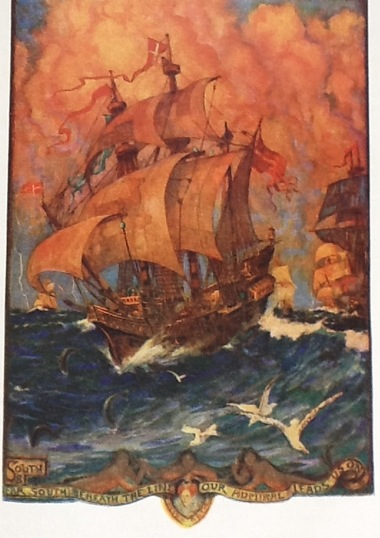 As an example, there is a long poem in praise of Drake.
I will give a verse or two in case you can find some history in it.
The subject?
'The first English Voyage round the World, the third only of such in recorded history; honour to Sir Francis Drake!'

WITH DRAKE IN THE TROPICS
South and far south below the Line,
Our Admiral leads us on,
Above, undreamed-of planets shine--
The stars we knew are gone.
Old towns, old streets, old friends, old loves,
We name them each to each,
While the lit face of Heaven removes
Them farther from our reach.

Now is the utmost ebb of night
When mind and body sink,
And loneliness and gathering fright
O'erwhelm us, if we think--
Yet, look, where in his room apart,
All windows opened wide,
Our Admiral thrusts away the chart
And comes to walk outside.

Kindly, from man to man he goes,
With comfort, praise, or jest,
Quick to suspect our childish woes,
Our terror or unrest.
It is as though the sun should shine--
Our midnight fears are gone!
South and far south below the Line,
Our Admiral leads us on!

As we know, on his journey Drake plundered many Spanish ships and brought gold back for his Queen.
Piracy was, I would say, theft, and murder too: how does Rudyard describe his adventures?
'Drake, Hawkins, Raleigh, Grenville, Cavendish and a hundred more of gallant English merchants and sailor pushed their ships into every corner of Spanish America; and of course the Spaniards hanged many of them as pirates...' 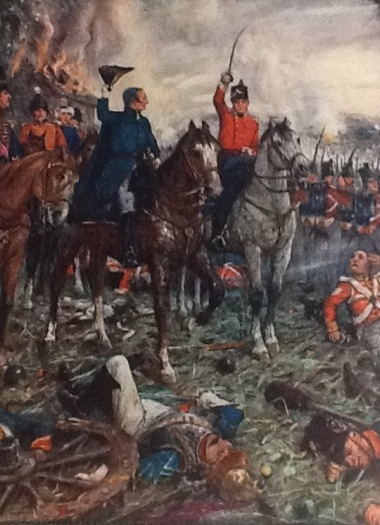 Napoleon on the battlefield.
Unusually, some English wounded!

To the end of the book Kipling continues to tell the reader his own version of events and people.
He writes of George IV:
'He was naturally clever and had some kind of selfish good nature, but he was mean, cowardly, and an incredible liar.
He was succeeded in 1830 by a stupid honest old gentleman, his brother, William IV, nicknamed "Silly Billy."
There was no harm in him, but there was little active good.'

What says our author of Queen Victoria?

'In this wonderful lady the spirit of all her greatest ancestors seemed to have revived, the burning English patriotism of the Tudors, the Scottish heart of the Stuarts, the courage of Edward III, the wisdom of Edward I, Henry II and Alfred.
And all were softened and beautified by womanly love and tenderness.'

What a testimonial!
And somewhat of a genetic breakthrough!

Kipling talks finally of the great inventions of the time.
He enthuses over the beginning of electric street lighting, the new steamships, the telephone, and the use of chloroform,and writes: 'Already people are wondering when the first service of airships will begin to cut out railways for long journeys.' 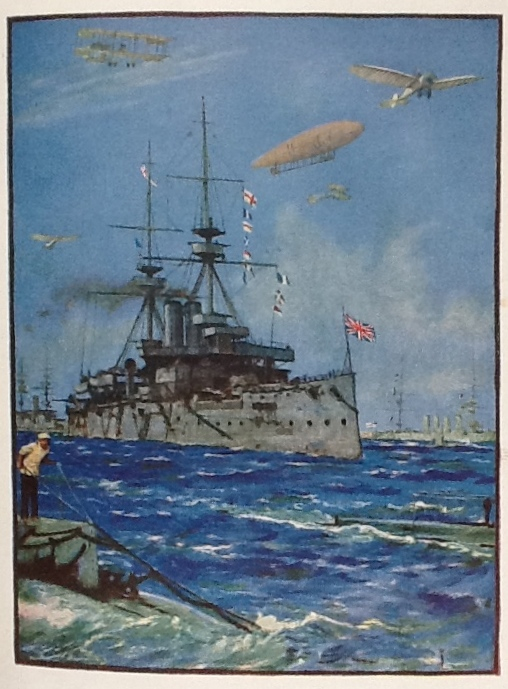 He adds another of his poems,'The Secret of the Machines', and ends with a serious question for his young readers:
'In the common sense of the word 'happy,' these and a thousand other inventions have no doubt made us happier than our great-grandfathers were.
Have they made us better, braver, more self-denying, more manly men and boys, more tender, more affectionate, more home-loving women and girls?
It is for you boys and girls, who are growing up, to resolve that you will be all these things, and to be true to your resolutions.'

No doubt you will observe, in his final sentences, Kipling's understanding of the difference between the role in family life of boys and girls.....

The history concludes with 'THE GLORY OF THE GARDEN', which has absolutely nothing to add to the text.

In order to write this article, I did a little research about Rudyard Kipling, and was interested to find that, in spite of his great popularity, his works were the centre of some controversy.
George Orwell called him 'the prophet of British Imperialism', and Douglas Kerr wrote that his works ' can inspire passionate disagreement, & his place in literary and cultural history is far from settled.'

Certainly, I would never consider teaching from this book.
But I still love the Just So Stories!
< PrevNext >