A good many years ago I stayed for a few days with a friend in Peterborough, and during the visit we visited a manor-house which was on land once cultivated by monks.
It was there that I saw a full-sized dovecote for the first time.
Until then I had rhought of a dovecote as a house on a stick, like an ice-lolly, very pretty and not at all practical.

How wrong I was! 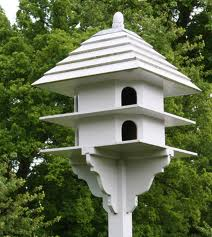 If you ever have the opportunity to stand inside one of the larger dovecotes, many of them no longer in use, which can be found in Great Britain, do take it.
The interior of a dovecote is dark, mysterious, almost cathedral-like; light filters in through the flight entrance to show ancient timberwork, and the sandstone or brick is usually worn and softened by time.
They are very simple and beautiful constructions. 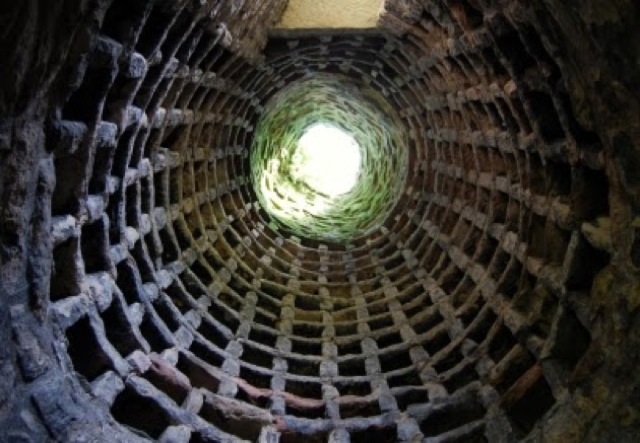 Dovecotes have a long and interesting history.
Doves were kept to provide meat for the table.
This practice probably originated in the Middle East, and is recorded by the Romans. 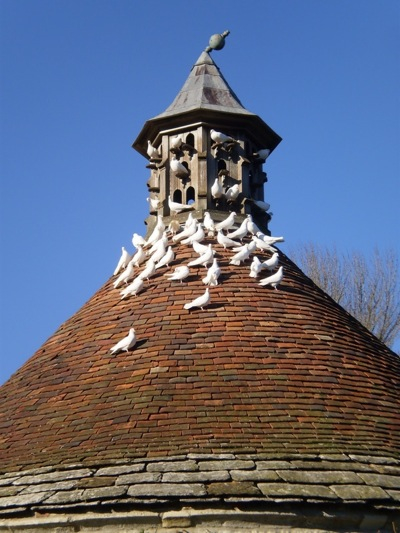 The specially designed pigeon-houses are known in England as dovecotes, pigeon houses, columbaria (from the Latin columba, a dove )and culverhouses ( from the Anglo-Saxon culfre, a pigeon ). 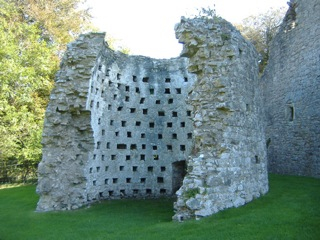 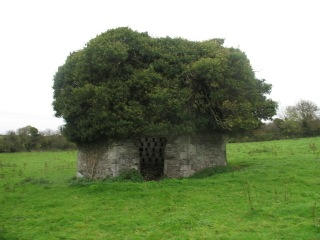 There are many ruined dovecotes, but a number have been restored and some interesting dovecotes can be seen attached to National Trust estates. 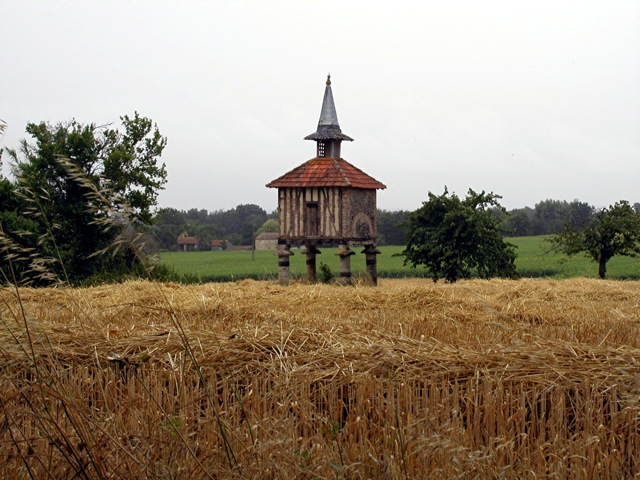 Oliver de Serres, in his book on agriculture published in 1600, wrote: "No man need ever have an ill-provisioned house if there be but attached to it a dovecot,a warren and a fishpond wherein meat may be found as readily at hand as if it were stored in a larder."

Today we have easy access to convenience foods.
In those days food was monotonous, especially in the winter; much of the meat was smoked and salted,and fresh meat was a rare delicacy.
Young pigeons, called 'squabs' or 'squeakers', were thought to be highly delectable; at that stage the flesh was soft,juicy and fat, with none of the toughness brought about by the exercise of flying.
The recipes in old books, ranging from pigeon dumplings to the 'Grand Patty of Pidgeons Royal', tell us that a man with a dovecote ate well.
No doubt he was not short of visitors,either! 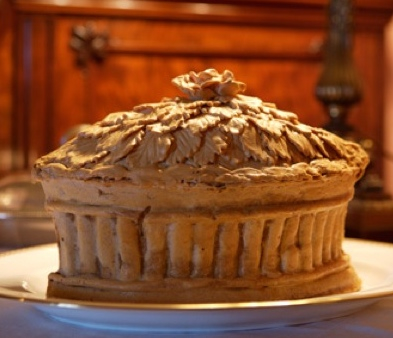 This is a pigeon pie, made to a victorian recipe.

Pigeons also had their medicinal uses in the early times.
Pliny recommended pigeon's blood as a cure for bloodshot eyes, and much later a number of illnesses were thought to be cured by applying a pigeon cut in half to the head or the soles of the feet.
The dried and powdered lining of the bird's stomach was taken internally for 'the dysenteries'.
Those who suffered from gout were offered an ointment concocted from pigeons' dung and watercress. 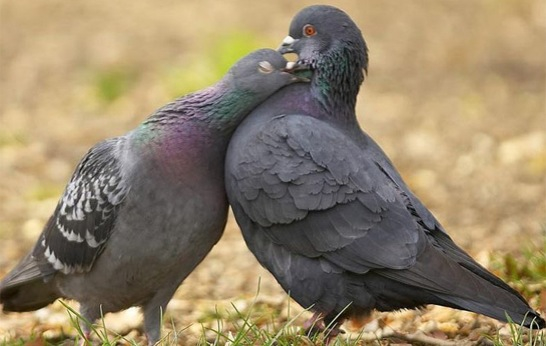 The birds mate for life, and a pair will produce two chicks about six times a year.
The parents feed the squabs until they are four to six weeks old.
The dovecote babies were culled at 4 weeks when they were still covered in down,and before the pin feathers had developed.
The cost of upkeep was negligible, although only the affluent could afford the actual design and building of a dovecote.

The birds foraged for themselves, although some owners provided grain.
In mediaeval records there is mention of a 'keeper of the flock',who would look after new stock, confining them and feeding them until they were established in their little home.
Once settled, a pigeon is firmly attached to its nestsite and will not wander.

Every part of the pigeon was used.
The feathers and down of the birds supplied the fillung for pillows and featherbeds; it was believed that those who slept on pigeon-feathers would live to a good old age.
Pigeon-dung was excellent manure, and was used in tanneries to soften leather.
In the early 17th century it was a major source of saltpetre, used in the manufacture of gunpowder.

Hundreds of dovecote pigeons were used as quarry in falconry, and later in the pigeon-shooting matches of the nineteenth century.
The pigeons which crowd Trafalgar Square today are largely descended from the original dovecote birds; their feral ancestors were the blue rock pigeons, Columba livia, which inhabit the rocky cliffs of seacoasts and islands across the world. 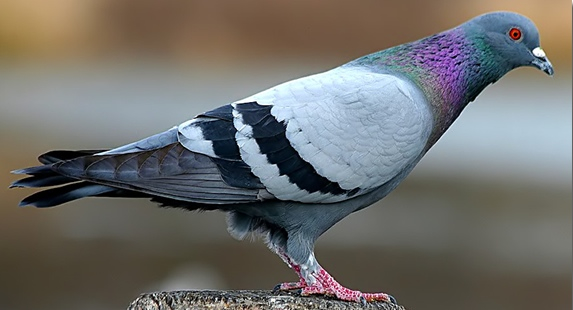 The exotic varieties of fancy pigeon were all bred originally from the blue rock pigeon.
In 1885 there were 228 named breeds, including the white Fantail, Pouters, Tumblers and Runts, which were bred for size and were once called Roman Banquet pigeons. 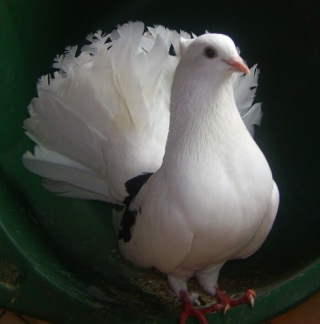 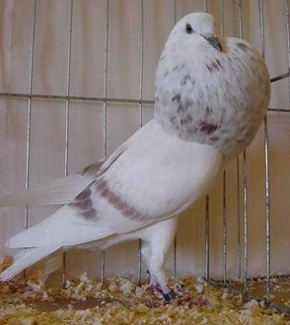 A Fantail pigeon and a Pouter. 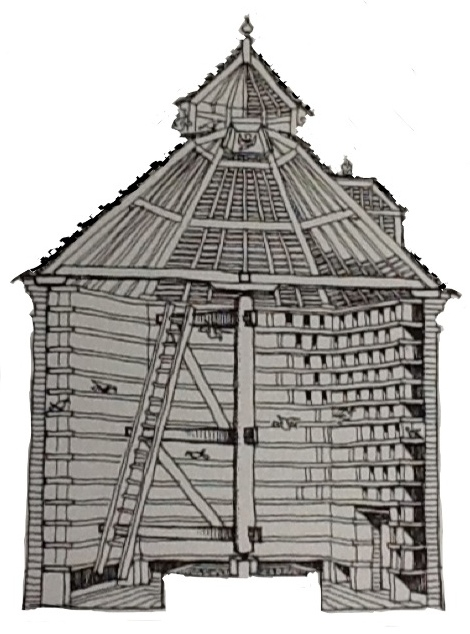 A typical circular dovecote.
The central beam is called a Potence( from the French word for a gallows ), and was an early labour-saving device.
These are usually found in circular dovecotes.
One or two ladders were attached, and the whole assembly could rotate to provide easy access to the nests, high or low.
Rectangular structures did not fit this arrangement, and instead there was usually a scaffold of beams, reached by ladders, which provided walkways. 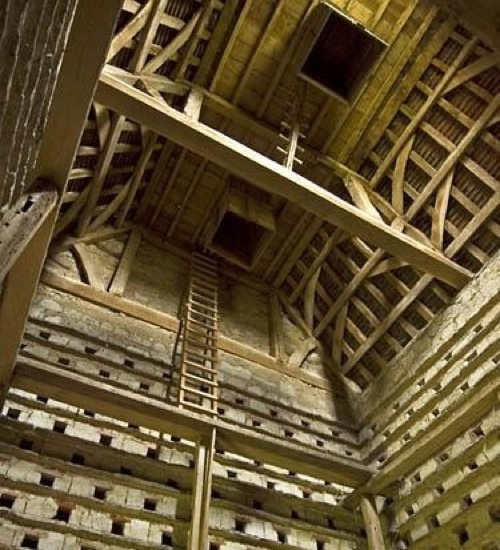 Here you see such a scaffold.

I have perhaps not been able to show you a wide enough variety of the dovecotes which can be seen in Great Britain, but I hope you will have glimpsed a little of the beauty that is out there, waiting.
The brickwork alone is worthy of note. 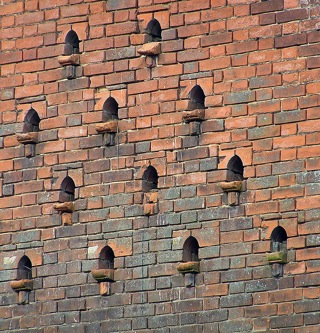 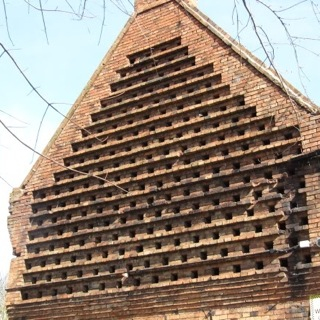 It is a pity that so many historical structures have been allowed to collapse and are now in ruins.

Put it on your Bucket List:
Stand alone in an ancient, empty, circular dovecote...
A significant experience. 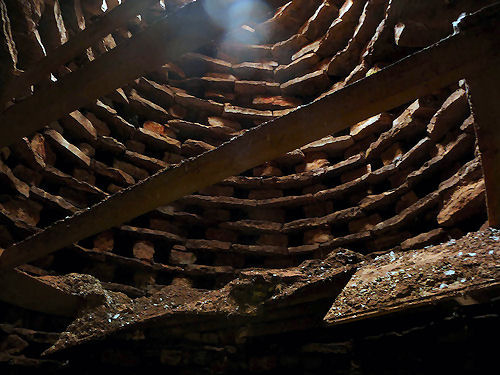