Four in One and Deadly

FOUR IN ONE AND DEADLY 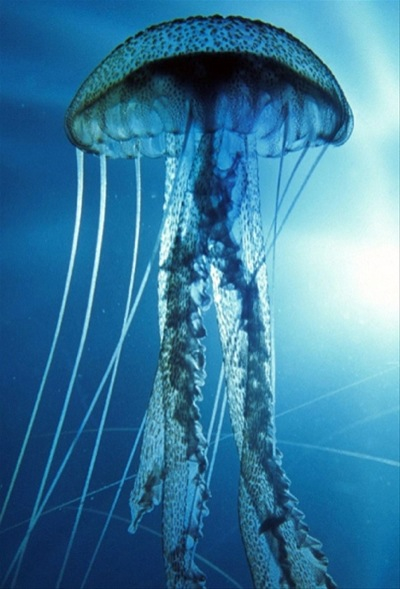 One of the strangest creatures ( or, in fact, colonial organisms ) in the world, this jelly-fish-like siphonophore is found in warm seas and is sometimes washed up in large numbers on our West country beaches.

It is also known as Bluebottle, Portuguese War-ship, and Portuguese Galley, no doubt from the man-of-war, a 16th century English armed sailing-ship based on an early Portuguese vessel.
Another suggestion is that the floats of the colony are very like the helmets of Portuguese soldiers in the 15th to 16th centuries. 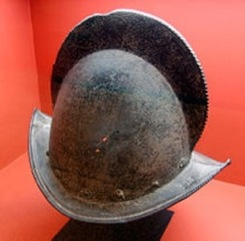 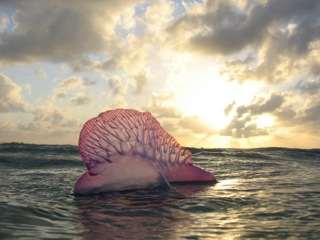 Although it looks like one creature, it is in fact made up of four different types of polypoid zooids, each of which serves a different purpose but cannot survive except as part of the group.

They are attached to one another, highly specialized and physiologically integrated.

1 One of the polyps, a gas-filled bladder called the pneumatophore (commonly called the sail ) enables the organism to float; it sits on the surface, and as the man o' war has no means of propulsion, the winds, currents and tides move it (them) across the seas of the world.

It is most commonly found in tropical and sub-tropical seas, but has been found as far north as the Hebrides. 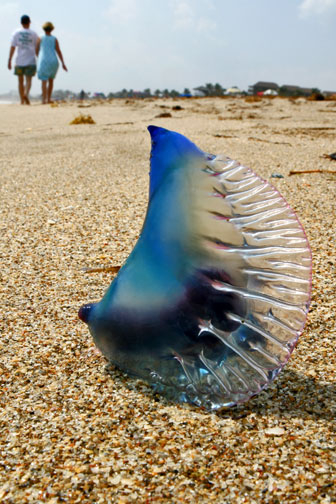 The sail has tentacles at one end, and is translucent, and tinged with pink, purple, blue or mauve.
It can be 4 to 12 inches long, and may extend 6 inches above the water.
The gas secreted in the sail has roughly the same composition as the atmosphere, but may build up a concentration of up to 90% of carbon dioxide.
If winds are strong, the Portuguese man o' war can be driven into bays or on to beaches.
They are usually gathered together by currents and winds into groups of THOUSANDS, and are dangerous to humans as the venomous tentacles, even after death, can deliver a powerful sting. 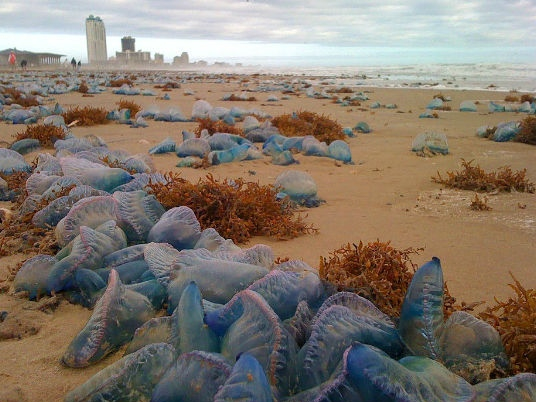 Here is a beach with a large collection of stranded 'men o' war'(?)
The sail has a siphon, and if in danger from a surface attack the man o' war can deflate the sail, and briefly submerge. 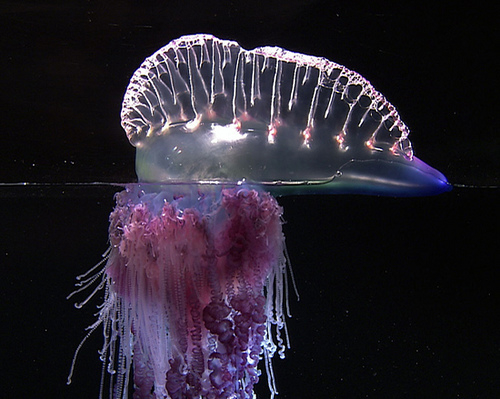 2 The dactylozooid ( defence) polyps make up the tentacles.
They are usually 30 feet (!) in length but can reach 50 metres (165 feet).
In fact, the man o' war is one of the longest animals in the world.
These long tentacles continually "fish" through the water.
Each tentacle bears stinging, venom-filled nematocysts (coiled, thread-like structures), which sting and kill small fish and shrimps.
There are contractile cells in each tentacle, which drag the prey into the range of the digestive polyps. 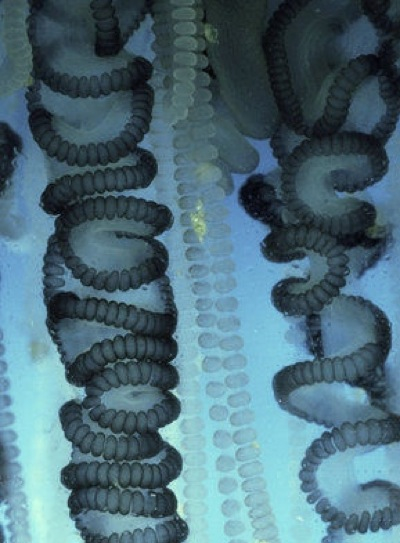 3 The gastrozooid (feeding) polyps now surround and digest the food by secreting enzymes that break down fats, proteins and carbohydrates.

4 The fourth group of polyps are the gonozooids.
Gonozooids are responsible for reproduction.

The groups move and live together in a colony, as one body.
An amazing, but deadly, creature....

STINGS usually cause severe pain to humans, leaving whip-like, red welts on the skin that normally last 2 or 3 days after the initial sting, though the pain should subside after about an hour. 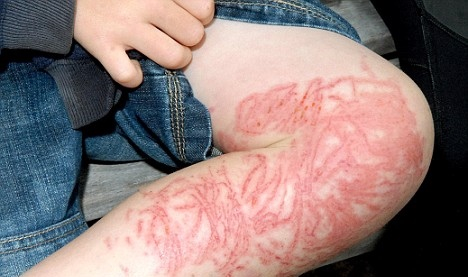 A sting may lead to an allergic reaction.
There can also be serious effects, including fever, shock, and interference with heart and lung function.
There have been deaths, but thankfully they are extremely rare.

FRIENDS of the MAN O' WAR

A small fish, Nomeus gronovii (the man o' war fish or shepherd fish), is partially immune to the poison from the stinging cells and can live among the tentacles.
It is protected by the larger tentacles, and snacks on the smaller ones under the gas bladder. 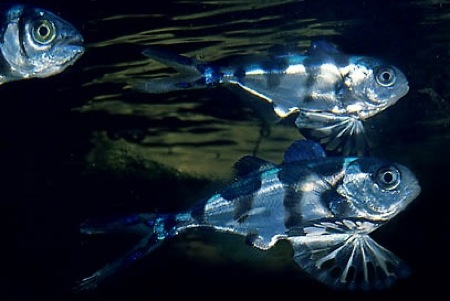 The Portuguese man o' war is often found with a variety of other marine fish, including the clownfish.
The clownfish can swim among the tentacles with impunity, possibly owing to their mucus, which does not trigger the nematocysts. 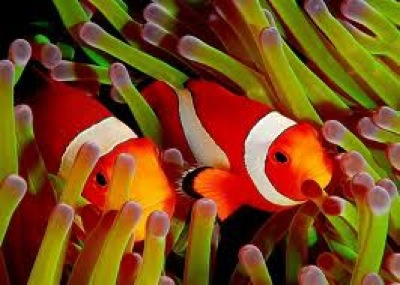 All of these fish benefit from the shelter from predators provided by the stinging tentacles, and for the Portuguese man o' war the presence of these species may attract other fish for it to feed on.

There is no such thing as a free lunch!

I have never seen a Portuguese man o' war, but what a strange way of living.
Not like Siamese twins, but integrated quadruplets....
< PrevNext >