(This is the second part of the real Mudlark story; look back for the first part, which tells of a young boy who broke into Buckingham Palace and sat on the throne.
He was treated very harshly indeed, and his whole life was affected by his childish adventures.)

After the second intrusion by 'In-I-go' Jones, there was publicly expressed dismay at the lack of security in Buckingham Palace.
The Queen had a young baby: because the building was so new, plasterers, plumbers and carpenters were still working there daily, and the police might not easily identify those employed by the Board of Works.
Meanwhile, the Boy was being kept in the House of Correction in Westminster. 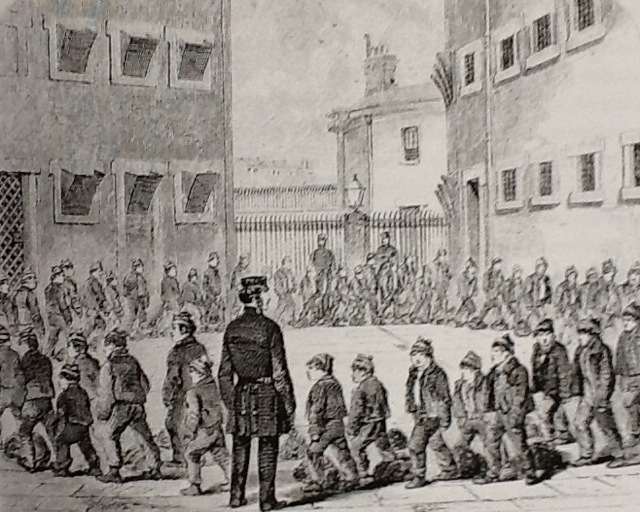 He was not allowed access to friends or family, and had no Counsel: the 'trial' was to be before the Privy Council, and in private, without the press, and he would not be defended.
His father complained bitterly about this in the papers, but to no avail.
He might have been even more vocal had he known that Edward was being given a sample of the treadmill, of which more later.
The hearing was on 13th December.
The Boy had to face some of the most powerful men in office: the Tribunal consisted of:
The Marquis of Normanby, the Home Secretary The Earl of Erroll, the Lord Steward The Earl of Uxbridge, the Lord Chamberlain Lord Duncannon, Mr Fox-Maule,M.P., Under-Secretary of State Mr Hall, the Chief Magistrate of Bow Street; and Colonel Rowan, the Commissioner of Police.
No-one gave evidence on the Boy's behalf, and his father was not allowed to be there.
Two policeman guarded him.
He was sentenced to three month's imprisonment as "a rogue and a vagabond." This is a typical record of the sentence. 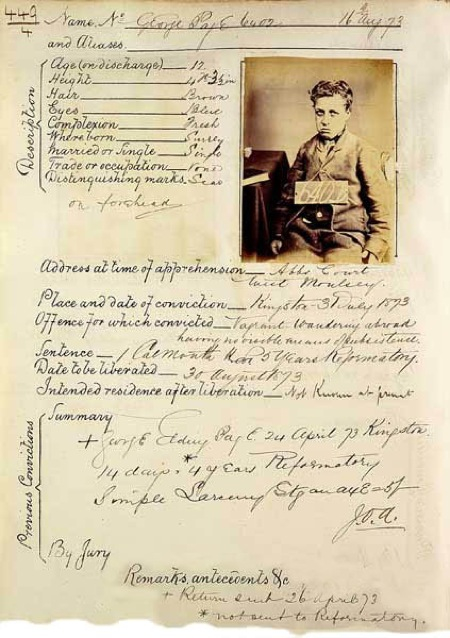 So the Boy went back to the House of Correction,where 300 boys of 10 to 15 were kept.
According to his father, he went in 'stout and strong' and came out 'thin as a skeleton,sinking under the effects of over-work and under-diet.'

It was here that the youngsters were made to work the treadmill.
They had to tread the steps for six hours a day, three hours at a time, on the treads for fifteen minutes and resting for five,treading until the statutory total of 8,640 feet had been climbed.
By the end of each day the Boy would have climbed higher than if he had climbed Snowdon and Ben Nevis combined. 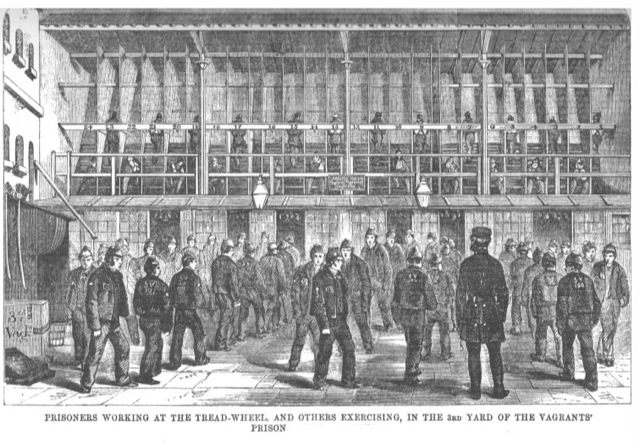 Three and a half thousand paces each day, growing more weak and fatigued,hour by hour,deafened by the clattering of the machinery......

Shortly before his release, the magistrate sent for the Boy and asked if he would like to go "on board a ship."
He was amazed when the offer was refused,and summoned Mr & Mrs Jones to Bow Street; he coaxed them into agreeing that their son should be sent to sea, showing them an Order he had signed for them to visit him for the first time in prison,'as they had been sensible.'

Unfortunately, Mrs. Jones was so horrified when she saw her gaunt and unhappy son, and learnt that he had by no means given his consent, that she burst into tears and pleaded that he should be kept at home with his family.
When the Boy was released, the story was once more in all the papers.
He was offered 80 shillings a week to make an appearance on the stage in a specially written play to be called 'Intrusion - or the Unwanted Guest'.

Songs were written about him, cartoonists illustrated his exploits,and there were jokes about him in Punch and other magazines. 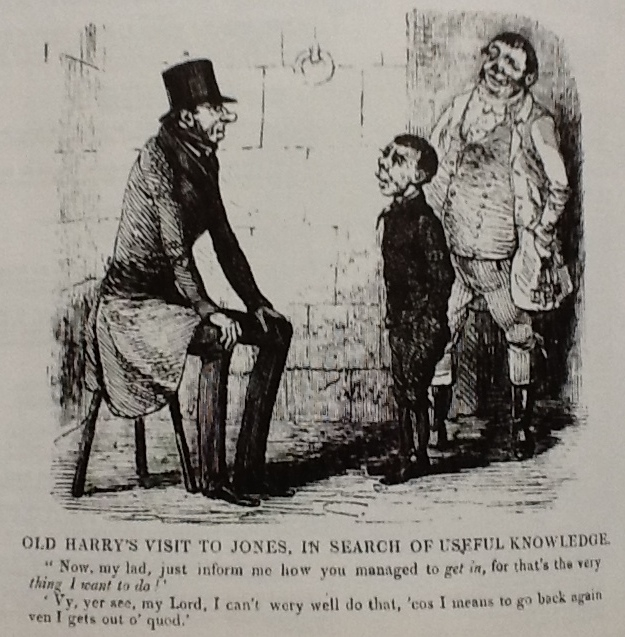 Reporters were ready to pay for titbits of information.
It is perhaps to their credit that Edward and his family refused to talk about his adventures.
A rich American visitor to Bell Yard, expecting a welcome, was bitterly disappointed,and described Edward as 'a small and sickly urchin, remarkable only for his taciturnity.'
It was difficult for him to get a job; as soon as his identity was known,the employer became disinterested in him.
His father wrote to a Sunday newspaper, expressing his concern that all the furore was preying on his son's mind.
Perhaps in time the excitement would have died a natural death: but sadly, it was not to be.

Driven by who knows what compulsion, EDWARD BROKE IN FOR A THIRD TIME!

On the night of 15th March,1841, he climbed the wall again, and managed to reach the kitchens.
A white handkerchief with the remains of a small feast of cold meat and potatoes was found behind the sculptures in the corridor. 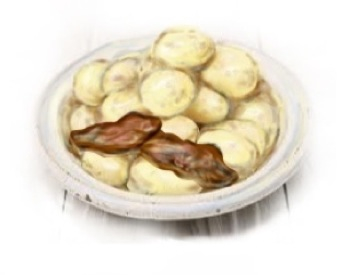 He reached the Grand Hall,but since his second intrusion there were extra police on duty, and he was soon captured.

There was a Privy Council trial at the Home Office,in camera,and once again the Boy was not defended or supported by family.
The only witness was his captor, and his parents had to wait in the street outside.
He was sentenced to another three months in the House of Correction.
Once again he faced the treadmill....

This time the public view was that the Boy was being unjustly treated; Mr Jones was not slow in writing to the press,and easily enlisted support.
In June, when he had climbed the statutory 700,000 treadmill stairs and was released (his conduct having been "quiet, orderly and even exemplary") the newspapers were on his case.

There was a murmur of attempts to deport the Boy to Australia. 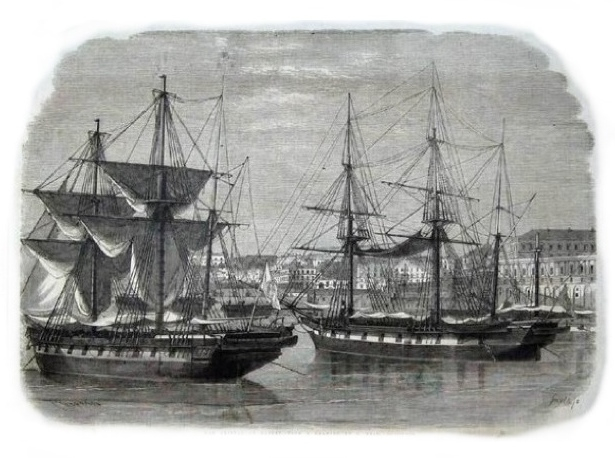 Certainly there was undercover machination.
Inspector J.C.Evans, of the Thames Police, acting under Home Office instructions,was described to the Jones family as a 'ship's agent,who could help to put the Boy on a very good ship.'
Evans missed the first boat, but finally managed to apprentice him on the Tiber, a sailing-ship on a five-month voyage to Brazil.
It is not known how the Boy was persuaded to sign the indentures,; Edward told his father that during the journey across the South Atlantic he was "subject to much ill-usage and quite disgusted with the sea-faring life."

Certainly he left the Tiber when she arrived in Liverpool in November.
He had no money, but did odd jobs until he had half-a-crown,and set off to WALK to London.
He slept in barns and under haystacks, and gnawed raw turnips in the frozen fields.
He walked the 210 miles in eighteen days, and reached home in time for Christmas.
It seemed that this was a happy ending,but no, not yet!

In February,1842,the headlines of the national papers shouted,"Extraordinary Disappearance of the Boy Jones!"
After coming home unexpectedly in mid-morning from his work in a Westminster coffee-rooms, Edward asked his mother for a clean shirt, left home and had not returned.
Mr.Jones went immediately to the Police,and a posse of police constables searched Buckingham Palace thoroughly, but there was no sign of him.
It was several days before an anonymous letter, addressed to Mr Jones, arrived.
It was signed " a Captain, and well-wisher to your son," and said, "I am requested by your son Edward to inform you he sailed on board the -------- for America on Friday last."

This was an odd missive: why did the Boy not write the letter himself?
Why was the name of the ship left blank?
In a later letter, postmarked from Portsmouth,the Boy told how he had been offered a good situation at sea, but had declared that he already had a job and was sick of the sea.
The next day he was taken before the Captain Lord John Hay of the 52- gun frigate 'Warspite',and his 'friend' was told to purchase a suit of blue.
Now he was on board,and bound to serve four years or more as a seaman.
The ship was bound for South America. 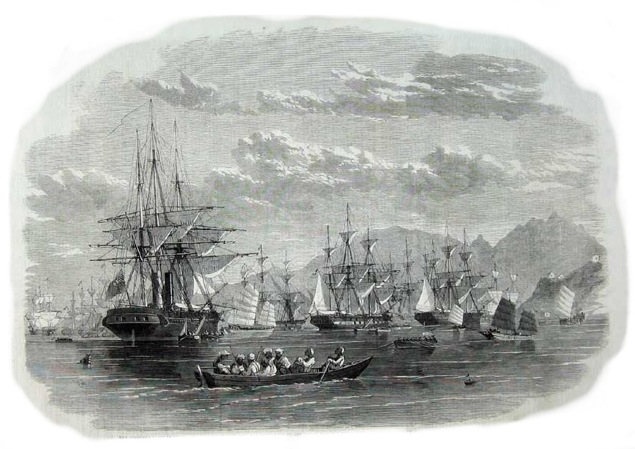 The whole procedure was carried out under duress, and it is not clear who was working behind the scenes.
Seven months later, the 'Warspite' returned to Portsmouth.
Jones sold his 'blue suit' for 45 shillings and walked back to London, where he was arrested and taken back to the ship.
However,he was no longer a pale and puny teenager: he was a strong and independent young man. 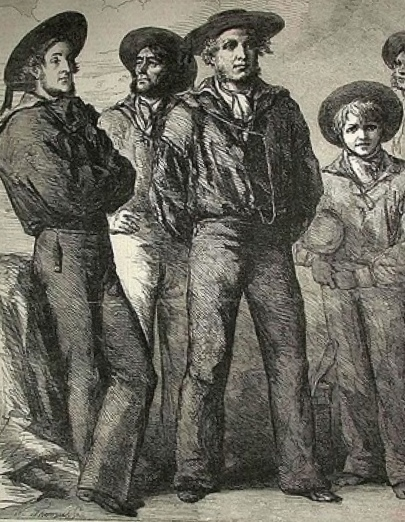 When the ship sailed to the Mediterranean, Seaman Jones served as mizzen-topmast-man.
No-one else could climb the rigging with such ease; his months on the treadmill had equipped him well.
From the topmast he watched the bombardment of Tunis by French men-o'-war.
His officers reported his conduct as 'orderly and regular.' 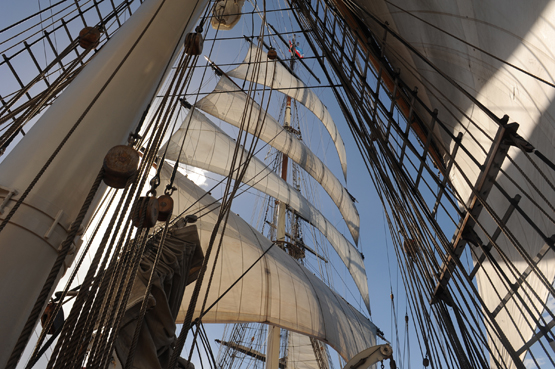 In May,1846, he was transferred at Malta to the 'Inconstant' for further Mediterranean service.
It was still thought necessary to keep a distance between this young man and the temptations of London.
I would have thought this an unnecessary precaution.
The Boy we knew had grown strong and bulky; no longer known as Edward, but Edwin, he was established in a new life.

I wonder if he often thought of the time when,as a skinny young boy, he sat alone in the moonlight on the British Throne? 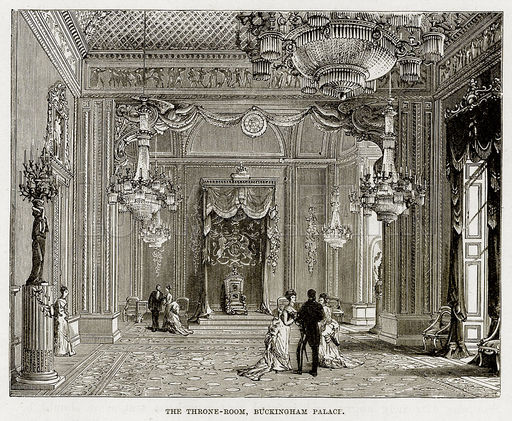