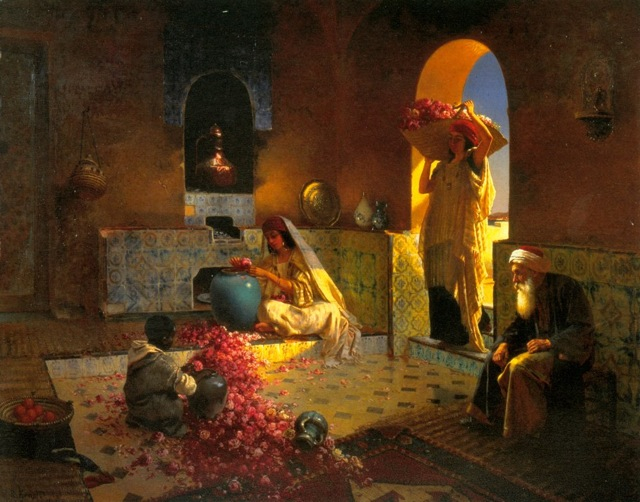 The art (or science?) of perfumery is an ancient one.

In the earliest civilisations of the world, we have found evidence of the use and enjoyment of aromatic plants, spices and scented flowers. 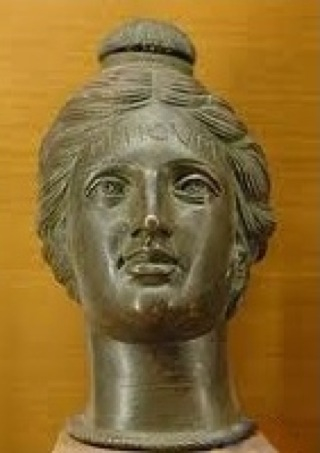 This is an Etruscan perfume bottle, in the form of a female head.

Aromatic herbs were appreciated for the pleasure they gave by their scent, but also for their cleansing and medicinal uses, and played an important part in religious ritual. 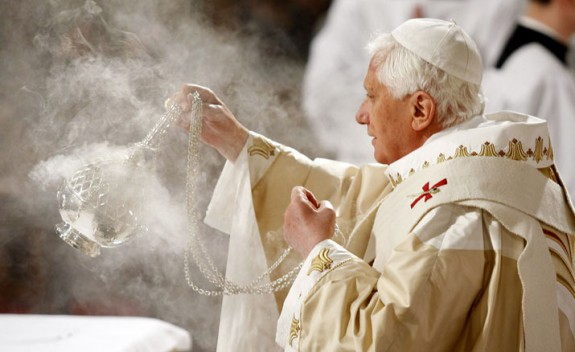 The Ancient Egyptians used flowers lavishly.
Wall-paintings and bas-reliefs show them enjoying the sweet perfume of the lotus flower. 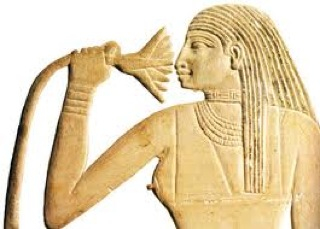 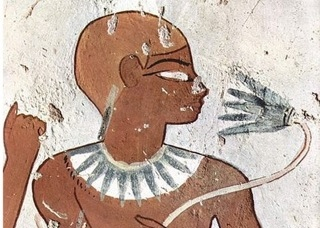 The famous Greek historian, Herodotus, travelled to Egypt several times, and he describes a banquet where there were garlands of aromatic foliage festooned along the walls, and the guests wore chaplets of lilies, saffron, and lotus flowers. 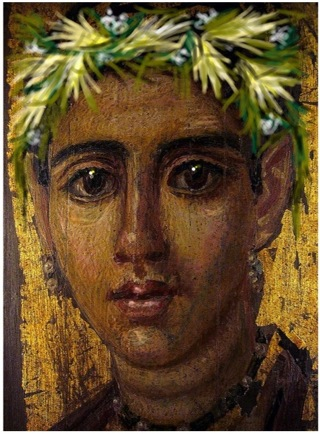 The word perfume comes to us from the Latin per, meaning through, and fumum, meaning smoke; the early Egyptians burned aromatics as incense, to scent the air as well as in religious ceremonies.
Unfortunately plant fragrances do not survive long, and in Egypt it became the priests' province to prepare longer-lasting perfumes in the form of oils and ointments, both for embalming the dead and for cosmetic use in life. 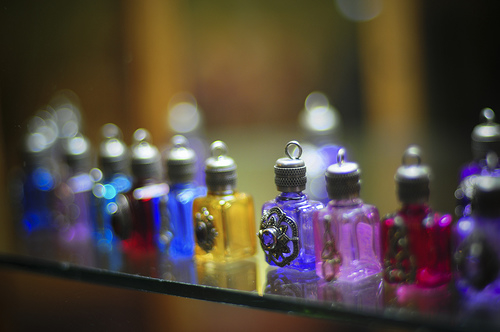 The early Hebrews learned from the Egyptians, and everywhere in the Old Testament there is reference to the use of aromatic herbs; thus, in Exodus 30:37, "And as for the perfume which thou shalt make, ye shall not make to yourselves ... It shall be unto thee holy for the Lord."
In Psalm 51:7 we read,"Purge me with hyssop and I shall be made clean," and, from the habit of wearing a little bag of myrrh close to the skin, "A bundle of myrrh is my well-beloved unto me" in the Song of Solomon. 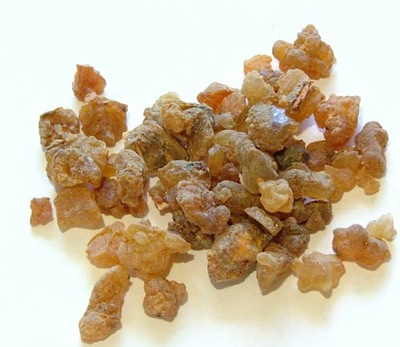 Both Greeks and Romans used scented oils and ointments, and in Persia, where roses grew abundantly, the art of drying and preserving petals in bulk was developed.
Cleopatra scattered them on her floors, and the Roman Emperor Nero used them extravagantly. 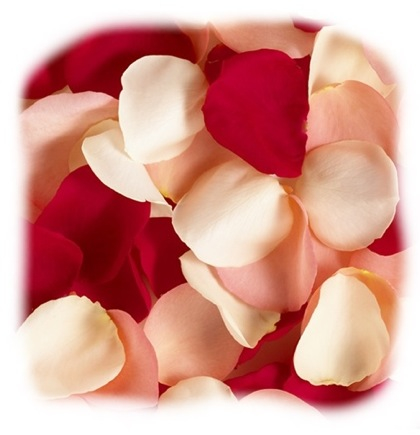 Arabia had trade links with Egypt in exotic resins and spices as far back as 2000 BC, and the powerful animal scents of musk, civet and ambergris came from India and China.
But it was not until a great deal later, from the eleventh to the thirteenth centuries AD, that the Crusaders, returning from battle, brought these precious aromatic substances back to Europe, and the gradual development of the art of perfumery began in the Western World.

The word "pomander" comes from the Latin pomum ambrae, apple of amber, and was mentioned in a thirteenth-century french poem which was translated by Geoffrey Chaucer. 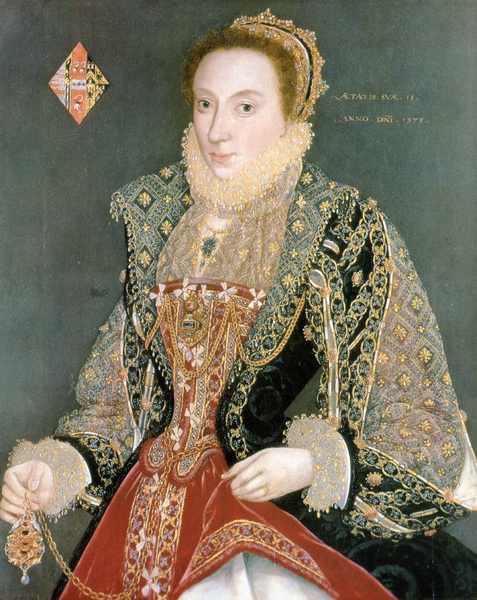 Pomanders were popular for at least five centuries.
From the 13th to the 18th centuries they were worn, or carried in the hand, as a protection against the noxious vapours in the city streets and of course the plague which was thought to be transmitted by 'bad air.'
Many herbals and household receipt books in the 17th and 18th centuries contain instructions for making pomanders.
In their simplest form they were small apple-shaped balls of ambergris or musk, and were often called musk balls.

Musk is the glandular secretion of the male musk deer found in the mountainous parts of China, Tibet and the Himalayas.
The glands are called pods, and are about 4 cm in diameter.
After drying they are soaked in water to soften them and release the odour, which is extremely long-lasting and powerful. 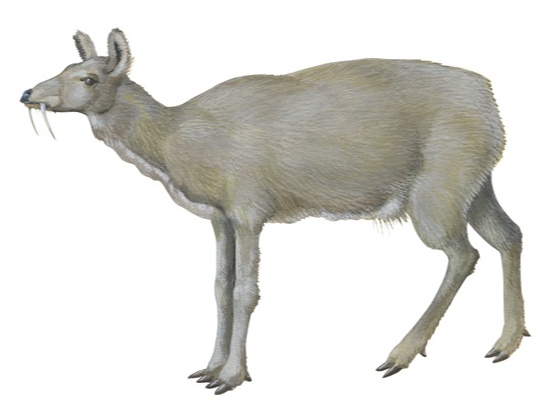 Later pomanders were spherical containers made of gold or silver with a pattern of holes, and filled with ambergris, musk and other aromatic ingredients.
Mary Tudor was given a 'pomander of gold' as a baptism gift by her godmother. 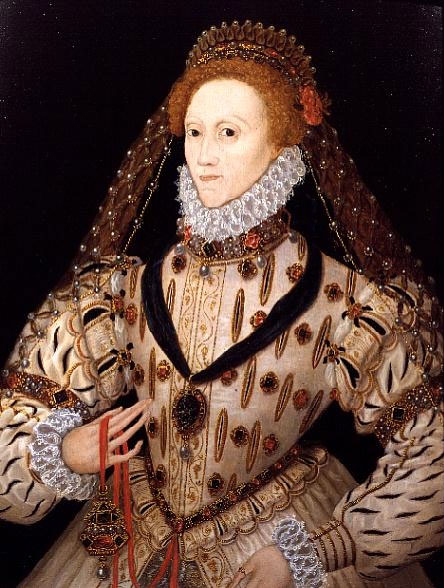 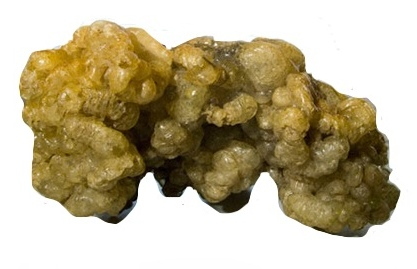 Records show that ambergris was a very important article of trade in NW Africa before 1000 AD.
On one occasion the Sultan of Fez made peace with a fierce mountain chief by offering him 50 male slaves, 50 female slaves,16 civet cats and a pound of ambergris...

From the eleventh century ambergris was used in Europe, and it always remained a valuable and rare commodity, being prized for the long-lasting odour it provided, and ( like musk ) for its ability to 'fix' other scents.
It was used by scraping off parings,and as it was soluble in fragrant oils was also added to perfumes in liquid form. 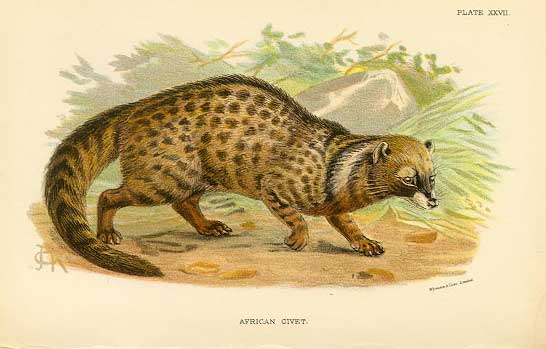 The African civet cat produces a similarly powerful secretion.
Together with cloves, cinnamon, sandalwood, and a wide variety of herbs and flowers, all these ingredients were used by apothecaries in the preparation of pomanders and perfumed oils and ointments.
As the materials were costly and rare, the pomander holders became more and more costly, being made of gold filigree and studded with jewels and pearls.
Elizabeth the First was once given a pomander 'garnished with gold and twelve sparks of rubies' by her physician, Robert Huycke, as a New Year present. 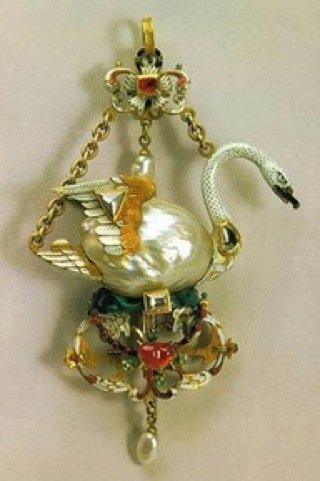 Here is a very beautiful example......

The blended pomander mixture was often made into beads which were worn as perfumed bracelets or necklaces.
Here is a recipe for scented beads from 1606:

1 Heat a quantity of labdanum in a mortar over hot coals. (Labdanum was a gum exuded from a rock-rose : in the Middle East the shepherds would obtain it by combing the fleeces of sheep who grazed amongst the plants.)

4 Add a generous dash of musk and civet.

5 Mix thoroughly. Anointing your hands with civet, roll it up in portions and with a Bodkin pierce a hole through it. 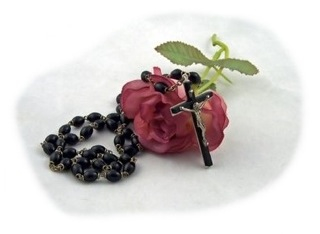 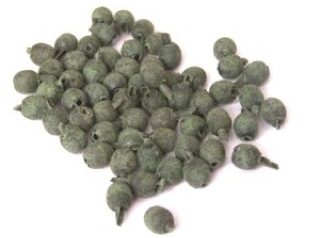 It is said that Mary, Queen of Scots, went to her execution with a rosary chain of pomander beads. 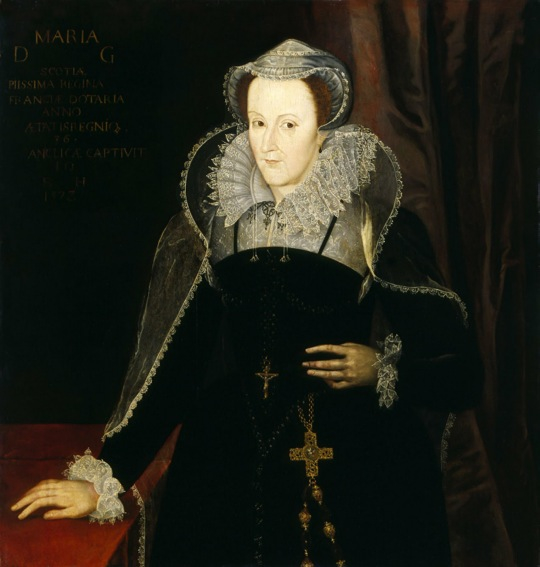 Not everyone could afford real pomanders, and much cheaper versions were soon devised using citrus fruits, hollowed out and filled with spices.
Cardinal Wolsey used the familiar orange stuck with cloves, and often took one with him when he went about among the common (smelly)people. 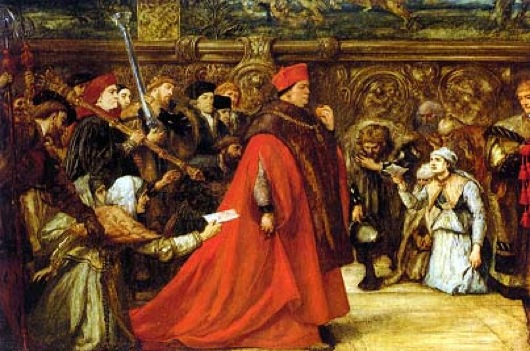 If oranges were too dear, the poorer folk would stick an apple with cloves.
This was known as a 'comfort apple.'

HOW TO MAKE A POMANDER

All you need is a small orange, thin-skinned, about 42-45 grams of cloves, one teaspoon of orris root powder, one teaspoon of cinnamon, a fine knitting needle, binding tape about half an inch wide, and coloured ribbon. 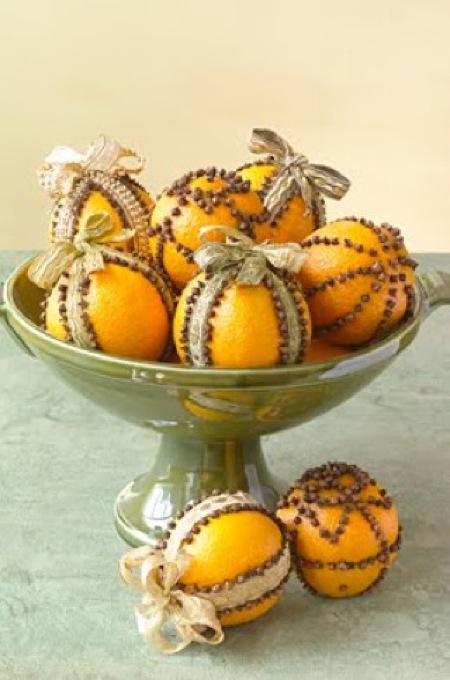 Wind the tape round the orange to form a cross.
This is to make a space for the ribbon later.

Use the knitting needle to make holes in the orange skin, a line at a time.
Push the cloves into the holes, one for each hole.
Make the holes fairly close together, but the orange will shrink as it dries and close the gaps.

You can make patterns with the cloves if you like.
Now remove the tape.
Stand the orange on greaseproof paper.
Mix together the orris powder and cinnamon and shake it all over the orange. Make sure it is well coated. 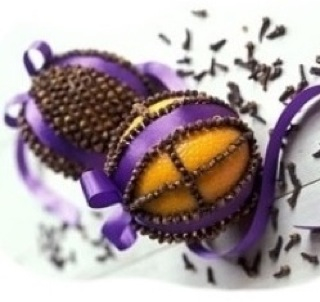 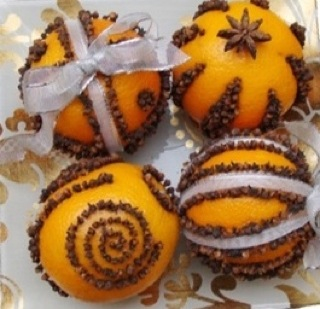 Leave it to dry in a warm place( an airing cupboard would be perfect) for about six weeks, until the orange is hard and dry.

Now tie with a pretty ribbon, leaving a loop so you can hang it in a wardrobe or cupboard.
It will smell LOVELY!

At Christmas-time, a bowl of assorted pomanders makes a scented welcome for your guests. 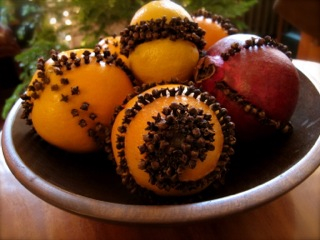 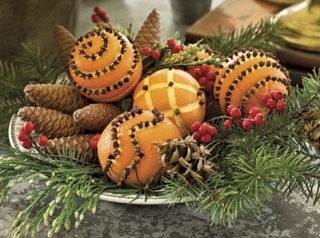