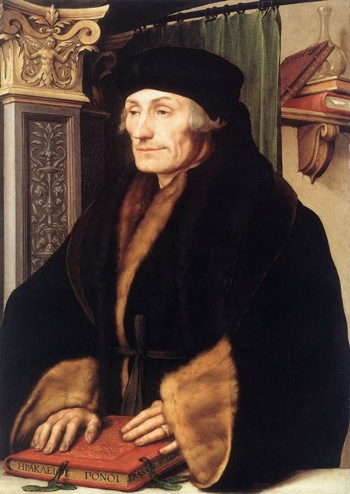 I have just been reading a book by the Scholar and Theologian Erasmus, first published in English in 1532. 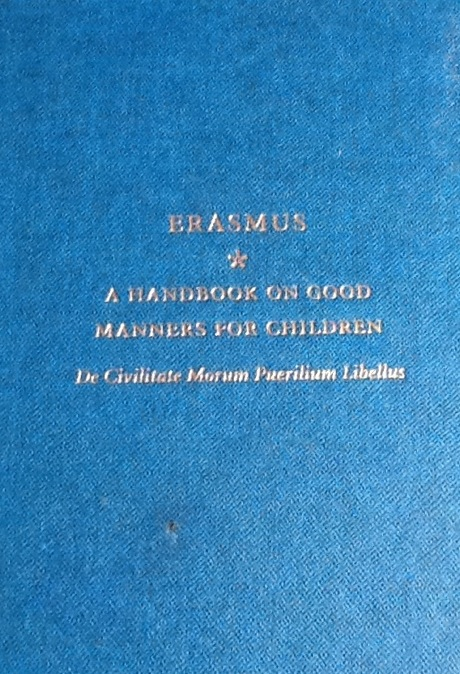 The book was cleverly written in very stylish Latin, since that was the universal language of the educated young man; it was directed at an eleven-year-old princeling in the Netherlands, Henry of Burgundy, son of the Prince of Veere and grandson of Anna von Borssele, a noblewoman whose patronage Erasmus had enjoyed. 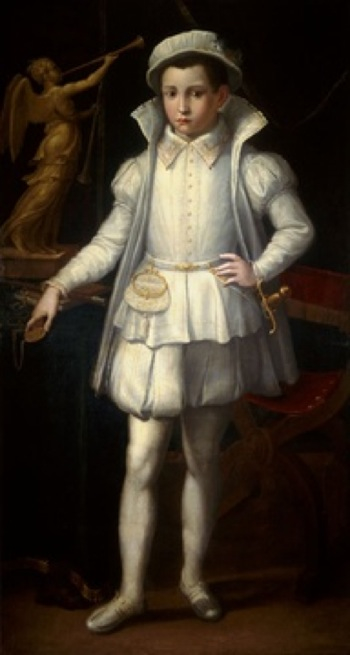 The book achieved instant success; it was the biggest selling book of the sixteenth century, going into nineteen editions and being translated into eight languages within ten years of publication.

It appeared at a time of great change, when feudal systems and ideas of chivalry were receding and the Renaissance was bringing in ideas of reason and social interaction.
Erasmus writes in a gentle, often humorous, kindly and sympathetic tone.
His emphasis is on the responsibility of the child to "readily ignore the faults of others, but...avoid falling short yourself."

The English word 'civility' is related to the title of this little work.
Here are a few quotations from the book.

It begins by addressing the young boy: "Erasmus of Rotterdam greets a child of noble birth and singular hope, the son of Adolph, Prince of Veere.
If that greatest of men, St. Paul, didn't hold back from making himself all things to all men, in order to benefit everyone, how much less should I worry about taking on a child's perspective from time to time in my enthusiasm to help young people?" 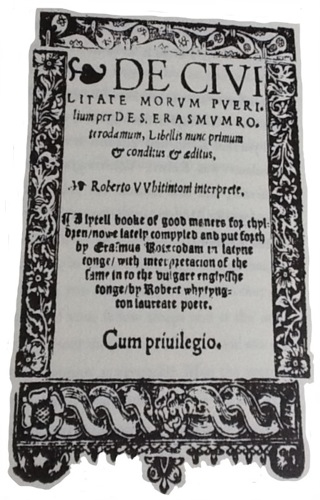 The book is divided into sections. In the English edition, each page is printed half in Latin, half in English, thus killing two birds with one stone. 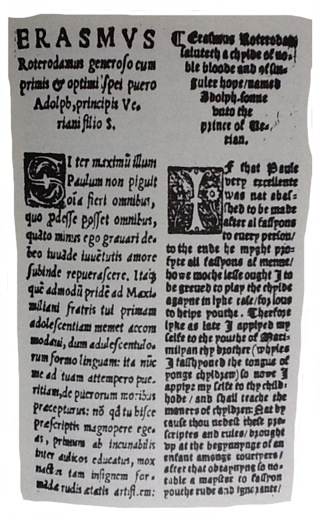 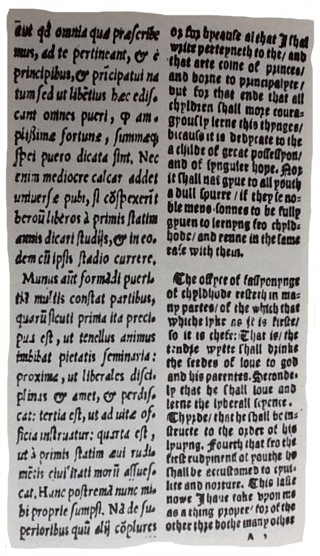 First Erasmus deals with the FACE:
he says the eyes 'should be steady, respectful, and well set'; 'drying your nose with your cap or your clothing, or on your sleeve or your arm, is a habit only for fishmongers';
'it isn't polite to smack your lips together,as if making a clucking sound, although this habit can be excusable in adults of high rank who are trying to make their way through a dense crowd';
'make sure you keep your teeth clean, but whitening them with fine powder is only for girls';
'scratching your head in front of others is not appropriate.'

There is a section for POSTURE and another for PRIVATE PARTS, the latter largely emphasizing that private is exactly what they should be;
'it is appropriate for these parts of the body to be hidden from sight, and even more so that they don't come into contact with another person.'

He suggests that it is ill-mannered to slouch, swagger or adopt an affected walk:
'We leave such silly staggering with a slight limp to Swiss soldiers, and to those who consider it great decoration to wear feathers in their caps.
And yet we note that this habit also pleases Bishops.' 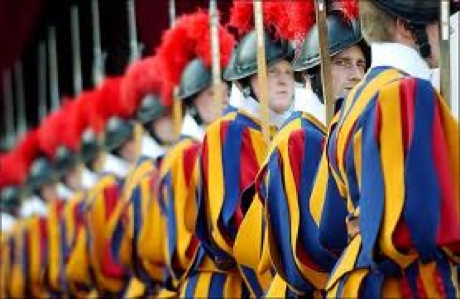 These Swiss guards from the Vatican are unique today in their 16th century uniform.
The soldiers of whom Erasmus speaks were mercenaries.
Since the late 15th century they were employed all over Europe, and had a great reputation.
They also had 'feathers in their caps!' 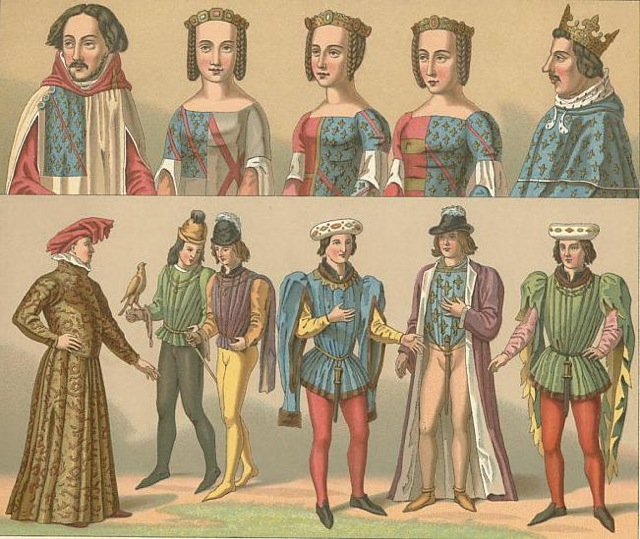 Throughout the book Erasmus shows that he prefers simplicity and abhors affectation.
In the section on DRESS he begins by pointing out that, although differences in rank, custom, law and fortune make it impossible to set out definite rules, 'clothing is, in a way, the body's body.
It's from their style of dress that we can understand the nature of someone's mind.'

He goes on to describe as 'ridiculous' parts of dress 'which have no function.'
He particularly focusses on the evils of long trains, transparent garments, and slashed garments; the latter were part of the most fashionable clothing of the time. 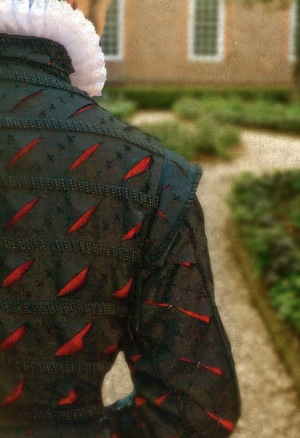 He writes: 'Clothing that's been slashed apart suggests madness.
Embroidered or multicoloured clothes are for fools or apes.'
He also warns against vanity. 'If your parents have given you particularly tasteful clothing, you mustn't keep twisting around to admire yourself, preening yourself in front of others, for one is the habit of apes, the other of peacocks.
The greater someone's fortune, the more agreeable is his modesty.' 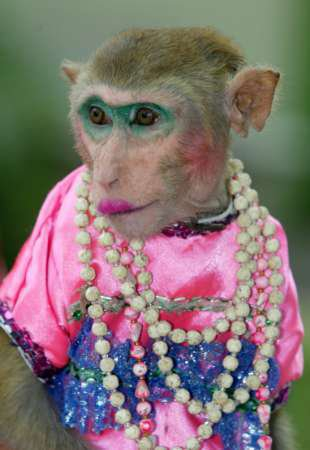 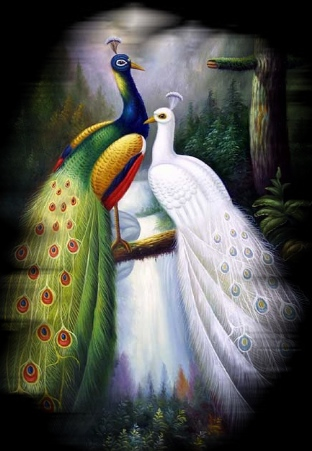 Erasmus is severe about frivolity in CHURCH;
'To witter nonsense into your neighbour's ear is the conduct of those who don't believe Christ is present, and it's a sign of insanity to let your eyes wander all over the place.
Consider yourself to have come to church in vain unless you go out from there a better and purer person.'


One of the longest sections is on TABLE MANNERS. 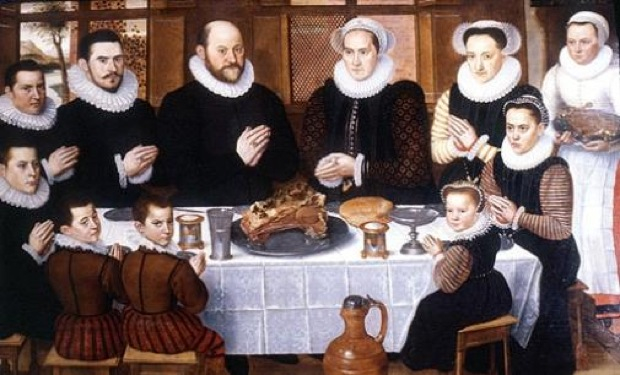 'Don't sit down without having washed, and before that, having trimmed your fingernails, in case any dirt is stuck under them and you are called a grimy soap-dodger.
If your belt is a bit tight, it's wise to loosen it a little, but to do that at the table would be considered rude.
As you wash your hands, so too, clear troubles from your mind.
For it's not good manners to be gloomy at dinner or to make anyone else miserable.' 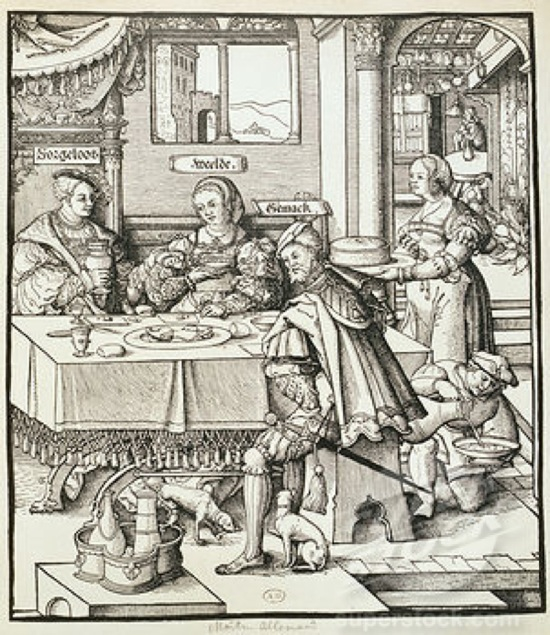 'Also, make sure you don't bother the person sitting next to you with your feet.
To fidget around in your seat, and to settle first on one buttock and then the hext, gives the impression that you are repeatedly farting, or are trying to fart.
So make sure your body remains evenly upright and balanced.' 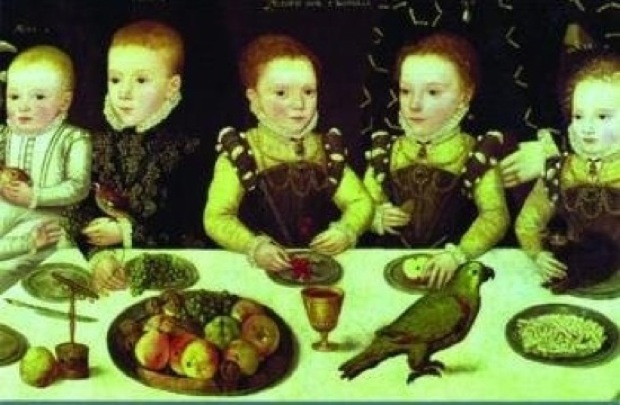 'For a child to drink more frequently than two or, at the most, three times during dinner, is neither appropriate nor healthy.
You should have a drink at some point after you've begun the second course, especially if it's a dry food.
Then again at the end of dinner, sipping it gently, rather than swilling it down slurping like a horse.' 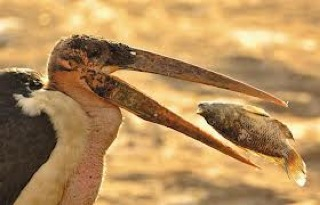 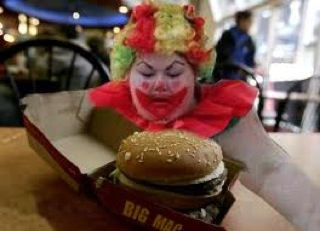 'To swallow whole pieces of food in one gulp is the practice of storks and clowns.

Licking a plate or dish which is sticky with sugar or something sweet is something cats do, not people.
Greedy gobbling is the way of ruffians.
Steady eating should occasionally be interrupted by intervals of conversation.'

The next section is entitled 'MEETING PEOPLE.'
Erasmus sums it up thus: 'We should speak respectfully and succinctly to our superiors; lovingly and kindly to our contemporaries.
It is disgraceful for a child to swear, either jokingly or in earnest.
The well-raised child should neither use foul language nor listen to it.'

'When playing games be cheerful.
Don't be stubborn, as that causes quarrels.
Likewise avoid cheating and fibbing, as it is from these basic habits that more serious flaws develop.
If, when you play against someone less experienced, you always win, let yourself sometimes be beaten, to make the game more fun.'

And finally, 'THE BEDROOM.'
Unsurprisingly, 'silence and modesty are to be encouraged.' 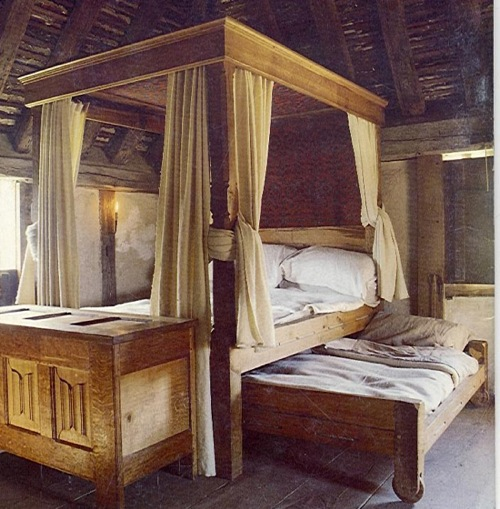 'If you share a bed with a companion, don't fidget and throw off your bedclothes, nor annoy him by grabbing his covers.
Before you put your head on the pillow, make the sign of the cross above your head and chest, and commit yourself to Christ with a brief prayer.
Do the same thing in the morning when you first get up, making a good start to the day with a short prayer.
For there's no better way to begin the day.'

There is a CONCLUSION.

'No one can choose their own parents, or where they come from, but everyone can shape their own character and behaviour.
The key to good manners is that you should readily ignore the faults of others, but avoid falling short yourself.
You shouldn't look down on a friend if he has poorer behaviour.
Some people compensate for their lack of manners with other qualities.
My dearest boy, I wish this to be imparted through you, so that, by this gift, you may win over the hearts of your fellow troops and at the same time present the pursuit of the liberal arts and good manners as agreeable.

May the grace of Jesus make you worthy to serve, and constantly carry you on to even greater honour.' 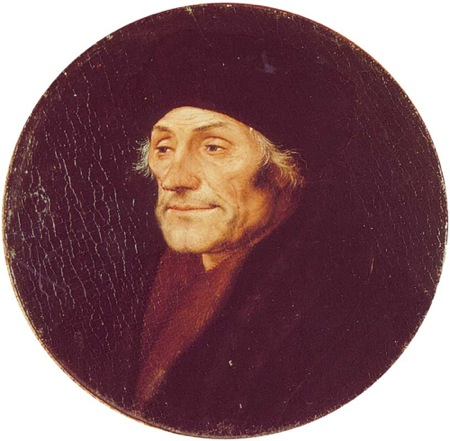 How odd, the ripped clothing, affected limps etc all very similar nowadays! Perhaps things do not change as much as we think

I think from very early times the wise old folk have criticised the youths of the time. Socrates was very critical of young people.
Maybe the next generation appear to threaten the status quo. It is interesting, though, that when they in their turn become middle-aged they may become more sedate!
#1 John 2012-09-19 22:31
How odd, the ripped clothing, affected limps etc all very similar nowadays! Perhaps things do not change as much as we think