Most of us are aware, at least in part, of the harsh lives of hundreds of Victorian slum-dwellers.
There are plenty of articles on this website alone to enlighten those who are ignorant of the dreadful facts.
But what of the children who lived in rural England, the sons and daughters of farm workers?
It would be easy to think that they were much better off, living in a pretty thatched cottage, eating vegetables and fruit and drinking milk from the cow.
In fact this is a totally false picture of the truth.
Fresh milk was not easily available; it was sent by rail to be sold in the nearest town, and even skimmed milk was reserved for the farmers' pigs! 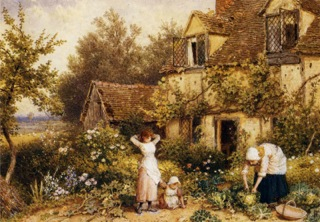 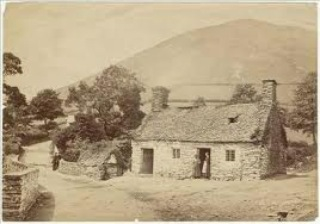 The reality was far from the romantic view.
Families lived on a very restricted budget; the monotony of the average diet was underlined in a report by an assistant commissioner in 1869.
A little girl, asked what she had for breakfast, said "Bread and butter."
What for supper? "Bread and butter and cheese."

He wrote, "This is a fair sample of what the agricultural labourer lives on, except when there is no butter or cheese produced he has nothing but the bread dipped in cider; the wife drinks tea, and there is sometimes a bit of bacon for the husband after his work, unless they are so poor that they have to sell every atom of the pig to pay the rent."

For those too poor to buy even tea there was also "Frog water," as it was called.
This consisted of a "frog" -- or a thick crust cut from the bottom of a loaf and blackened before the fire. 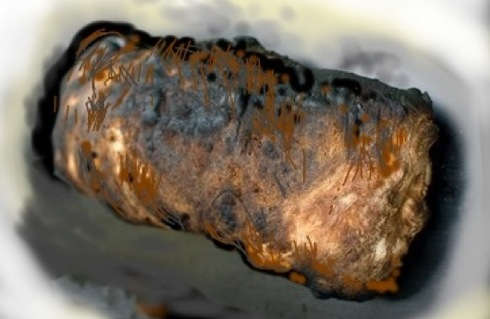 It was then placed in the teapot and boiling water poured upon it.
After it had been allowed to stand for a few minutes, the liquor was "fit for use."

I shall write an article later about the life of Victorian villagers, but first I want to talk about something I found by accident while researching.

For poor families, it was essential that the wife and children worked, to supplement the husband's meagre earnings.
Pay for home craftwork was very low, but the pennies made the difference between bare sufficiency and want. 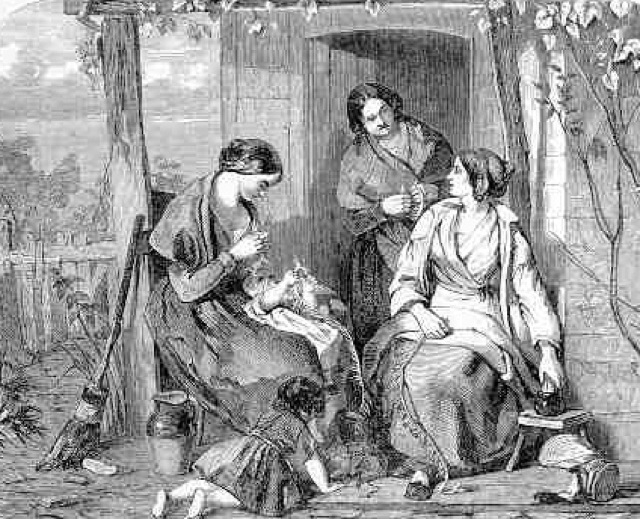 This is a typically romantic picture of cottagers plaiting straw.
Their hair and clothes are far too well kept!

Even children as young as three or four would be expected to work,and work hard, to bring in extra pennies.
There were a number of occupations which could be followed at home, to add to the weekly income, and sometimes children's little fingers were neater than those of the adults. 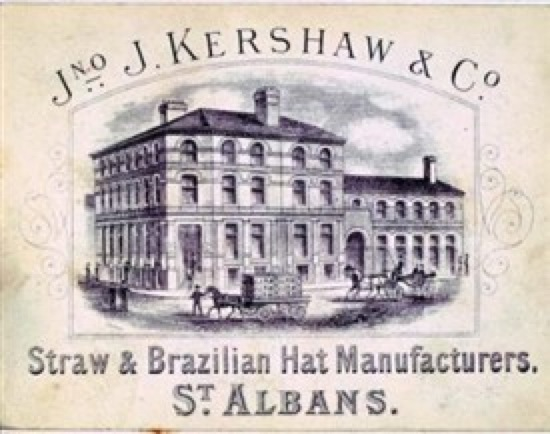 Lace-making and glove-making were popular, but I want to write about straw plaiting because it was something I had never heard of until last year. 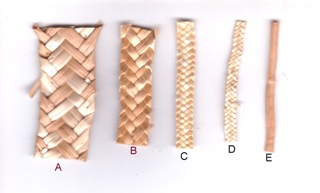 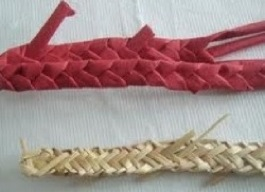 When straw hats were in fashion, there was a great demand for the plaits.
Markets would trade in straw, and stalls would sell bundles of plaits.
In some areas women specialised in sewing the plaits together. 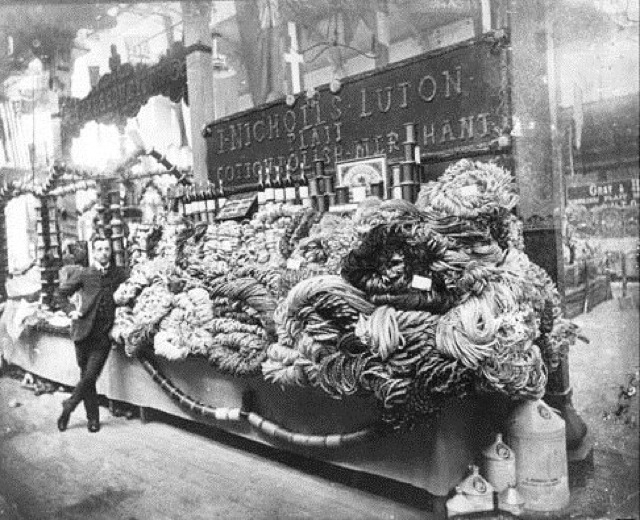 The worst part of all these practices was that craft schools were set up to train the young children, and although reading and writing were supposedly part of the school's provision they were not high on the menu, so that the children were mostly illiterate.
Mothers would send their little ones to these schools to be trained to plait, and to leave themselves free to work without distraction.
Children as young as 5 or 6 worked for six to eight hours a day at lacemaking.
In the mid-1800s, in Buckinghamshire alone there were 10,487 workers in the industry, 2,000 of them children. 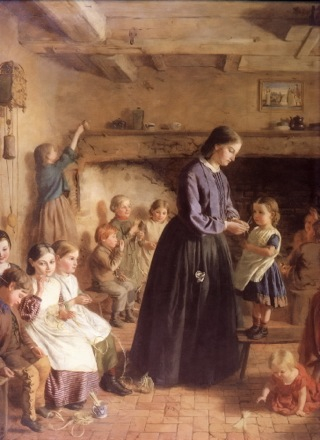 Straw-plaiting, part of the process of hat-making, was less skilled than lace-making, and could be done by very small children, who were sent to a plait school at the age of three or four.
One of the most unpleasant parts of the work was the drawing of the straw through the mouth before using it.
This was because it would snap if dry.
The straw cut the children's mouths; the splits were rather like paper-cuts; they were very painful and bled, and often little fingers were cut too.
Imagine how sore and painful this was!
The work was non-stop and there was no time for play. 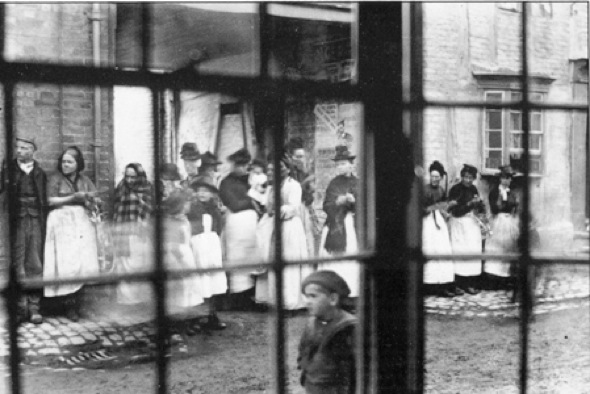 Mothers would set their children a number of yards to plait per day, and often these little ones would carry a bundle of straw under their arms, plaiting as they walked to school.
In every village people of all ages, grandmothers, mothers, teenagers and the youngest of the children could be seen, their fingers ceaselessly at work. 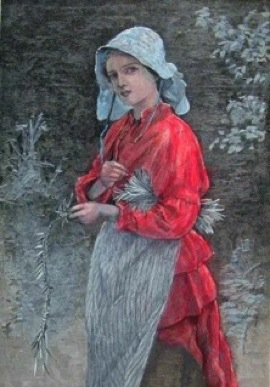 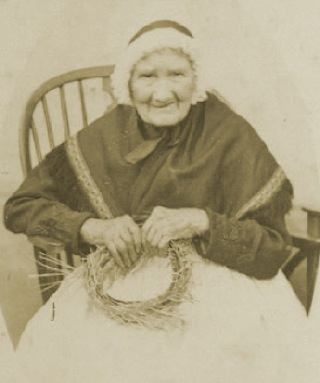 Many plait schools were patronised because the mistress had a 'formidable stick,' which was used freely to keep the children at their work.
In 1864 an observer met a seven-year-old and her friend 'on their way from school at tea-time,' plaiting as they walked.
Sarah said she had five yards of plait to do at each school session, plus 'one yard at dinner and one at tea-time.'
She got up every morning at half-past six and began work,'because I have so much to do.' 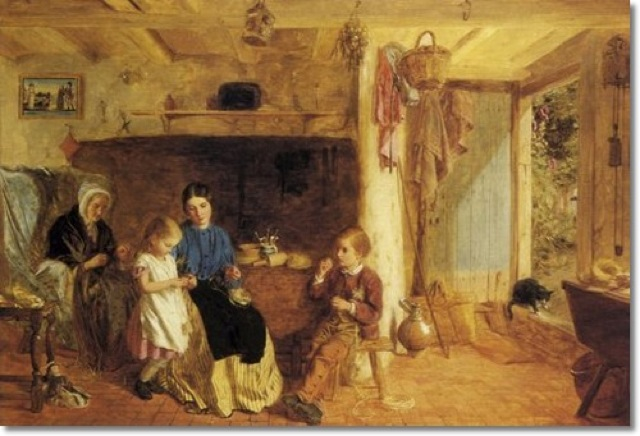 One girl said she was paid 4d for 20yards.
She could do three yards an hour.
She was at plaiting school from 9 to 5, and went home for her dinner.
If she had not finished her quota, she carried on in the evening.
The very small children, two or three years old, were used in the plait schools to clip off the loose ends of straw, and had their scissors tied to their bodies.
In the pictures you can see the loose ends sticking out. 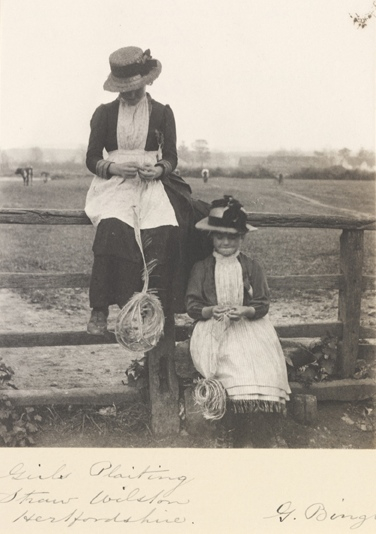 Educational standards were very poor indeed; in many plait schools it was not even claimed that reading and writing were taught.
This is a poem, written in the 1860s.

The Plait Girl - A Bedfordshire Sketch

Before a rustic cottage door,
And sitting in the sun,
I saw a girl of eight years old,
And a tiny little one.
Each loft arm held a hoop of plait,
Fast growing to a score;
For quickly moved their fingers small,
As I drew near the door.

"Well done, my little folks," said I,
Unto the elder maid ;
"Is that your little sister there,
So busy at her trade ?"
"Yes, sir," she said, and from her mouth
Another straw she took ;
"And that's my brother Billy there,
A plaitin' near the brook."

"Do children plait so young," I said,
"Oh yes, 'taint nothin' new,
There's Billy, he are less than her,
And Billy he plaits too."
"What may you earn ? you cannot say,
Come, try and give a guess ;"
"Well, sometimes eighteen pence a week,
But sometimes I earns less."

"When father had the fever, sir,
We little money got,
But a lady kind, buyed all my plait,
And then I earned a lot."
"But mother splits the straws for me,
And she does more nor that,
She clips the ends, and 'mills' it too,
Afore she sells the plait."

"And then she takes all what we've made,
And though it rains or snows,
To sell it all,on market days,
To Dunstable she goes."
"But mother says, that by and by,
If I makes haste and grows,
That I shall go to Luton, sir,
Where everybody sews."

"I do so long for that to come,
I are so proud to grow :
They don't do plait at Luton, sir,
They only has to sew."
"You love a romp at play, don't you,
On the green before the door?"
Yes, mother lets us play sometimes,
When we have done a score."

I gave the book, and turned away,
And musing o'er the chat,
I sighed that children are not taught,
Because they have to plait."

The poem is perhaps not a literary treasure. It may be simple and crudely expressed, but it tells the truth about the life of the children caught up in the industry.
Adults also plaited in every minute of their spare time. They plaited in the street as they socialised. 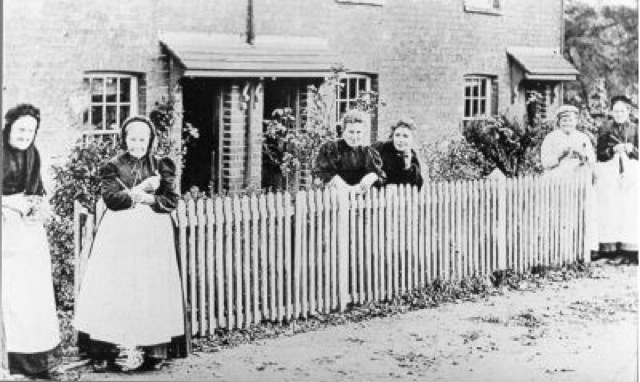 The wives and mothers also spent many of the hours of daylight at home in plaiting, and family life was put under great strain.
There was no time for housework or cooking, and "families had precious little comfort."
Female plaiters were accused of being poor housewives, "utterly ignorant of such common things as keeping their houses clean, mending clothes or cooking their husbands' dinners." 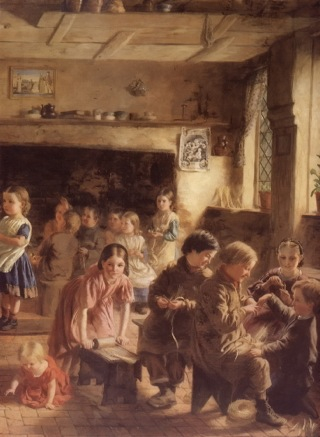 A victorian painting of children in a plait school. Once again, a rather romantic image......

Much anxiety was expressed about the schools by inspectors from the Children's Employment Commission, one of whom reported in1864; "The window in this school was shut on a hot summer's day, but the door open.
The air was of course hot and heavy, with a strong smell."
In the winter, draughts had to be excluded "as the children cannot work if they are cold, and they have to sit so close to the fireplace that the fire cannot be lighted, so that they have coal or wood in earthen or even tin pots.
These make a disagreeable smell."

It is rather ironic that even peg dollies of the period were plaiting! 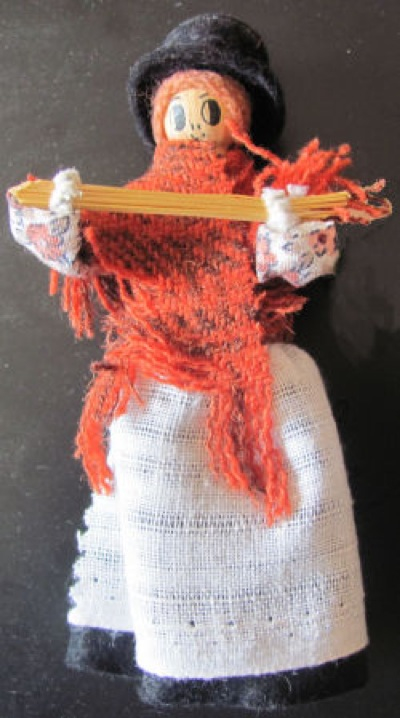 It was only the collapse of the straw plait trade, later in the century, that began to change the situation.
Hundreds of little children spent their early years in constant work, struggling to reach the target they had been set.

A heavy price was paid for fashionable hats! 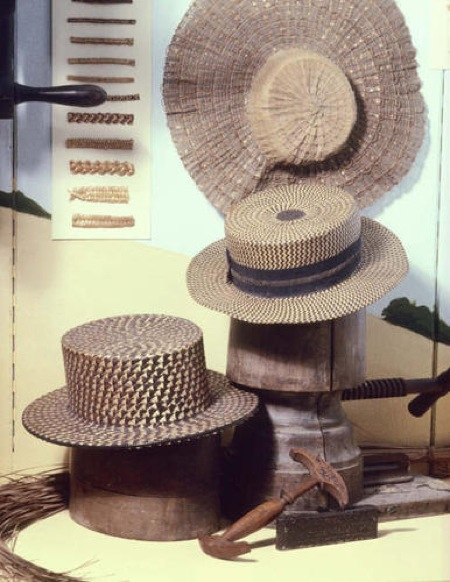