England has produced some of the most beautiful gardens in the world.
You will know the names of some of our more celebrated gardeners: Capability Brown and Gertrude Jekyll are part of gardening history. 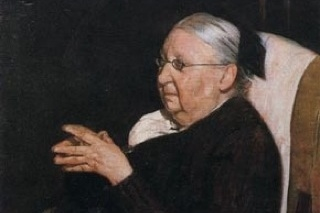 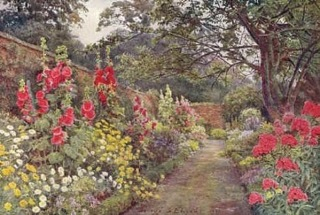 Gertrude and one of her gardens.

However, there is one of the most imaginative and creative of all our English gardeners whose life and thoughts remain a mystery.
His works are open to us, but he kept himself to himself.
He designed his garden as a small universe, using trees, topiary, hedges and avenues to mark the boundaries of a hundred smaller worlds, and enticing the visitor with peephole arches and distant views.
Year by year he built and paved, collected and planted, and left us Hidcote Manor Garden in the capable hands of the National Trust.
I have heard about this garden, read books about it, and seen pictures of it, but never actually stood there and enjoyed it. 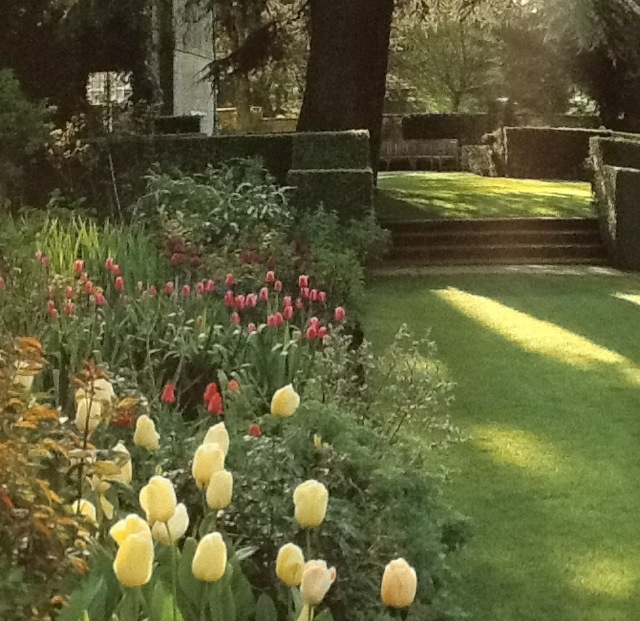 However, I have not managed to find out much about its origin.
Very little is known about the creator of Hidcote Manor Garden.
Attempts have been made to write the story of his life, but there is very little information about him.
Lawrence Johnston was, in fact, a very shy character.
His mother was always in the background.
She held the purse-strings.
She left the estate to his cousins, and he had to survive on the interest.
One of his neighbours said, when meeting him after a long interval, "He is a dull little man, and just as I remember him when I was a child.
Mother-ridden.
Mrs. Winthrop, swathed in grey satin from neck to ankle, would never let him out of her sight." 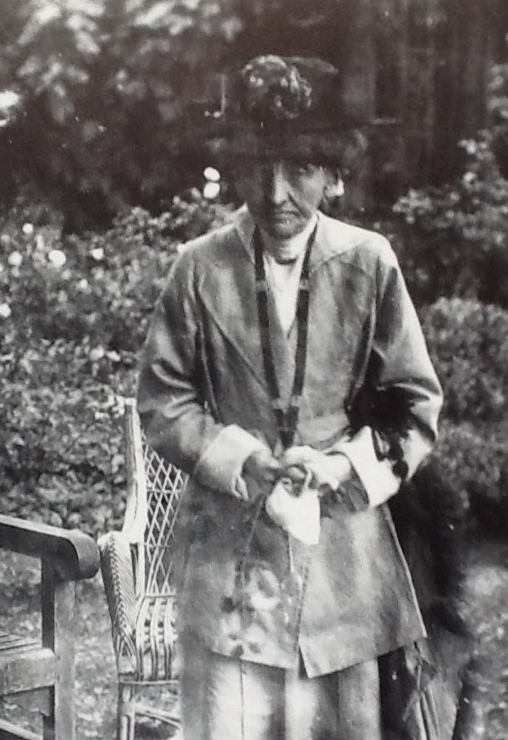 He kept no diaries, wrote few letters, never married, and had few friends.
Until 1907, when he arrived with his by then twice-widowed and well-heeled mother at the Hidcote estate, he had lived with her the life of a wanderer.
He had followed an army career; he fought in the Boer War, and was a Major in the First World War(it is difficult to imagine him in an authoritative role; another mystery.)
During the first seven years in the new home, he was often away on army duty, and it is just possible (although records do not exist to confirm this) that Mrs. Winthrop began the garden.
Its development from that time was certainly due to this 'dull little man.'
There were several gardeners, employed from the village.
It seems that the project meant a great deal to those who worked there. 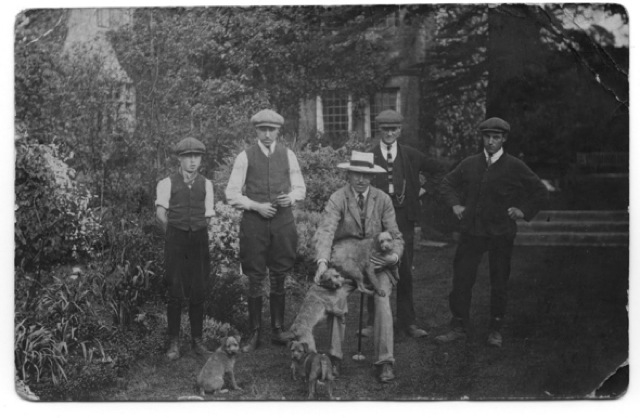 Lawrence was very fond of his dogs, if not of people, and they are with him in the handful of photos which exist. 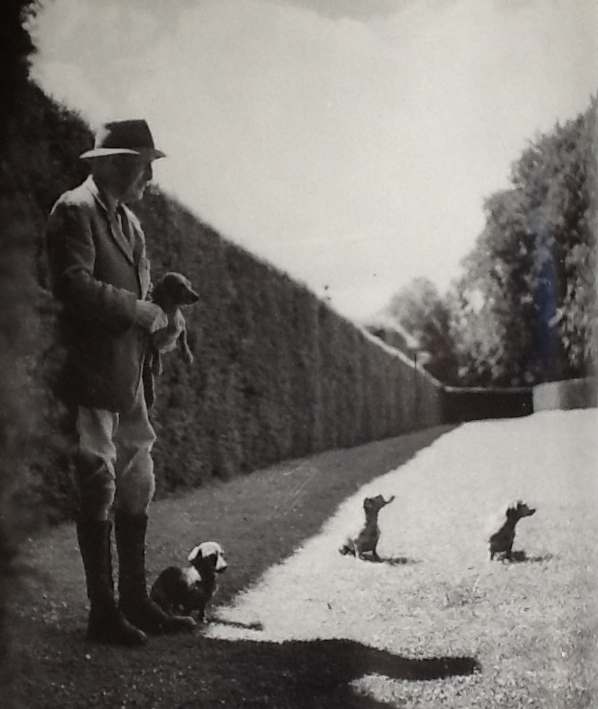 But he certainly cannot have been dull.
The garden is a complex and imaginative creation, and the work of many years of dedication.
And Lawrence had a band of gardeners, and later volunteers, to carry out the work.
The land was not an obvious choice for a gardener.
It was high-set(600 feet) and brutally exposed to wind and weather, until Lawrence planted his evergreen oaks, the tapestry hedges and avenues of beech and holly.
The terrain sloped awkwardly, down to the South,with a rise to the West.
The garden has lost some of its original features. 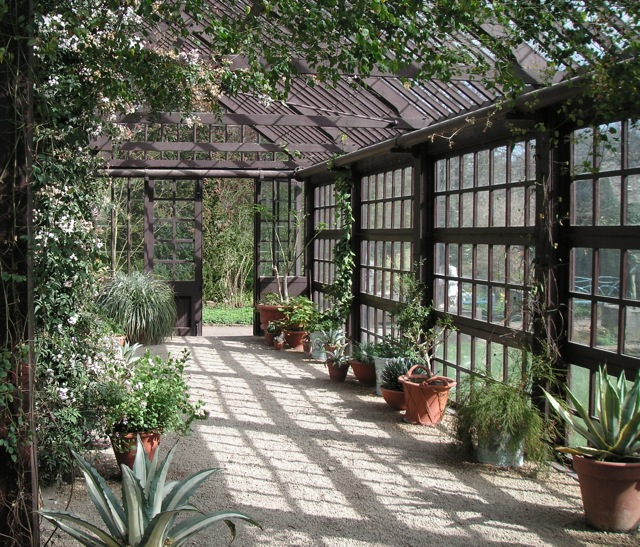 Originally there were plant shelters for exotic plant collections, and movable glass roofs which allowed warm climate subjects to overwinter in comfort.
This is an example of the modern version.
And there were flamingos, with their own pool and living quarters. 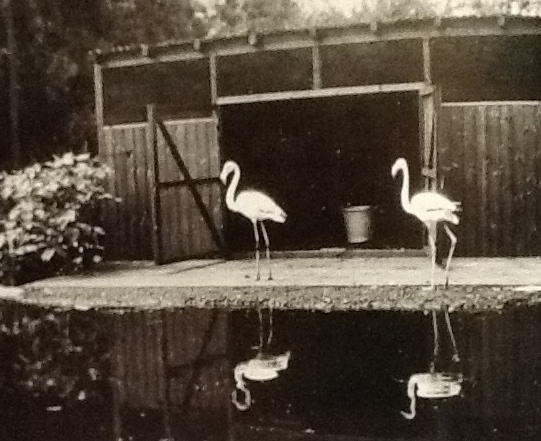 The remarkable thing about the garden was, as Lee-Milne wrote in 1943,"It is full of surprises.
You are constantly led from one scene to another, into long vistas and little enclosures, which seem infinite."
Today the National Trust call it a "Garden of Rooms." 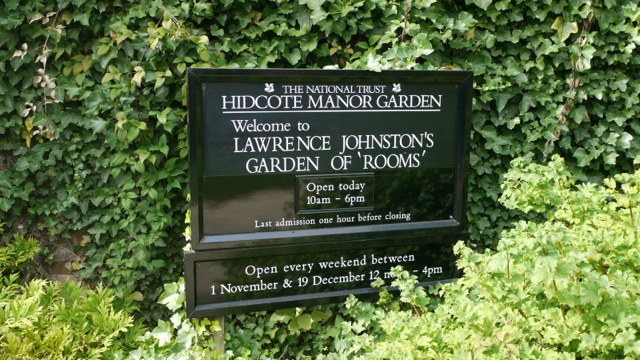 Hedges and mature topiary-work, avenues of trees, gates and arches and small enclosed sheltered areas entice the wandering visitor to turn aside and discover a small new 'room' with distinctive planting, as in the White Garden, or a distant view.
The Long Walk rises to a gate which apparently opens to the sky, but on reaching it you will find a wide pastoral vista. 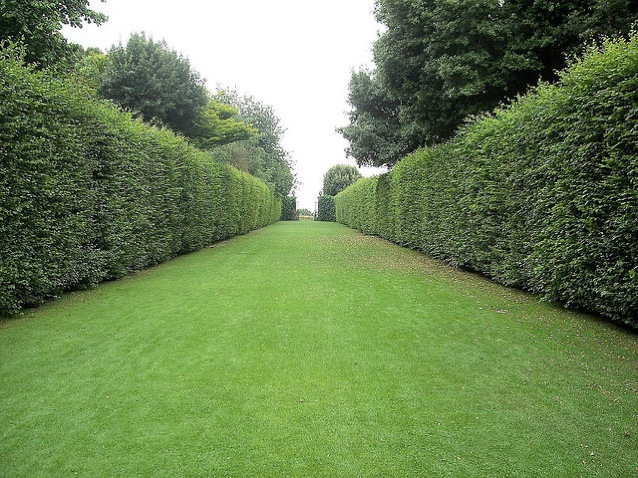 For me, this is the most impressive of all the elements of the garden.
It must be quite an experience to walk on soft springy turf towards the open sky.
And as you proceed,on either side open out more surprises to tempt you.
There is no set route; each visit is a journey of exploration, which changes with the seasons and the time of day. 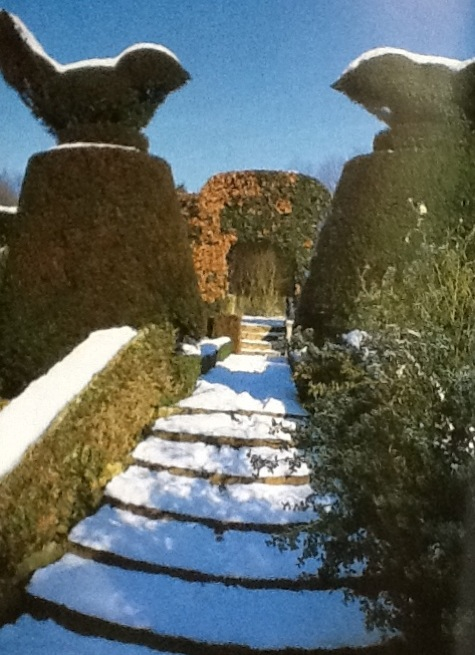 Here is the view of the bathing-pool topiary on a snowy day.

Evening offers one delight, winter snow another.
Autumn and Spring bring the colours of leaves and the changing pageant of flowers.

Winter in the Stilt Garden.

As the visitor chooses the path, new 'rooms' open up on either side, and different attractions are offered.
One of my favourites is the White Garden.
It is a symmetrical little enclosure with matching pairs of stylised topiary birds, and the warm tones of the stone paving contrast with the neat box-edged corner beds. 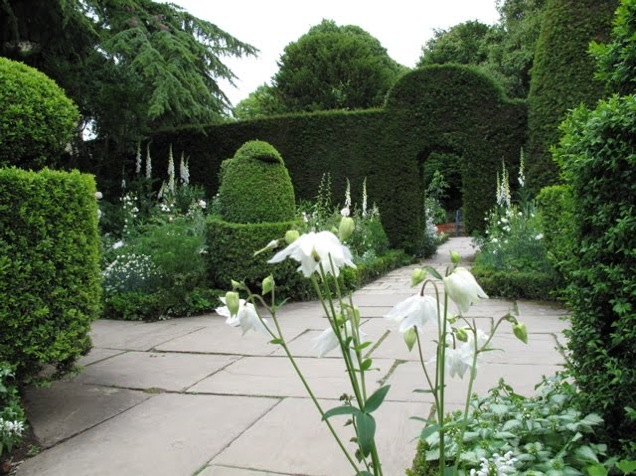 At different times of the year the cream and white flowers shine against the dark green; white nettle, violas, tulips and acanthus.
Everywhere there are views into other spaces. 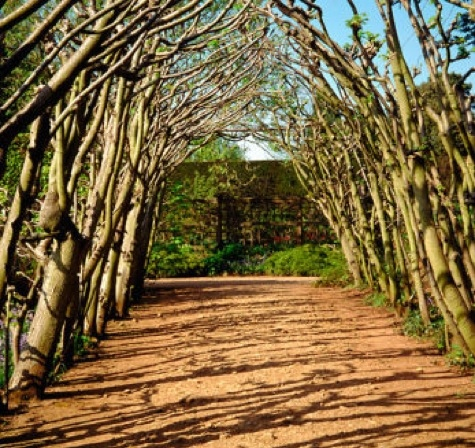 There are arching tunnels of trees, limes and beeches for example.

This is one of the Hidcote cats. Here and there you can glimpse him, on his way to some sunny spot. 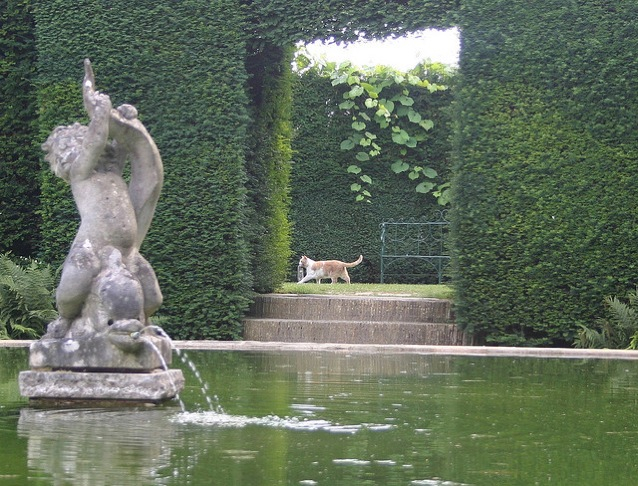 There is a constantly changing pageant of blossom and bloom.
The red borders are at their best in summer, when exotic plants are brought into the sun from their winter shelter.
But whatever the season, these borders look almost too redhot to touch! 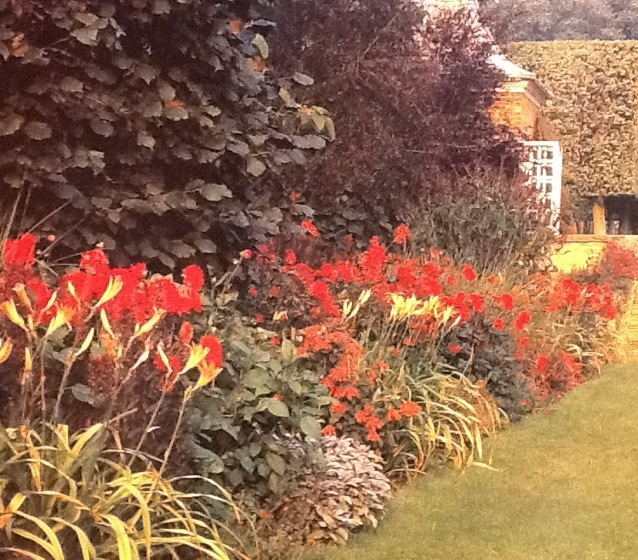 The Pillar Garden has giant purple alliums, deep pink peonies and pillars of dark yew.
Hedges of the homegrown Hidcote lavender line the narrow path and, as you go by, brush against you and release their sweet scent. 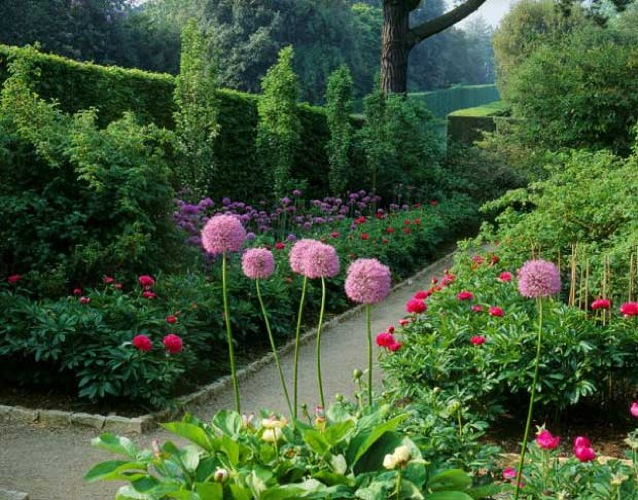 There is so much variety here; close by there are flowers of every kind, from the familiar cottage favourites to plants brought long ago from foreign lands. 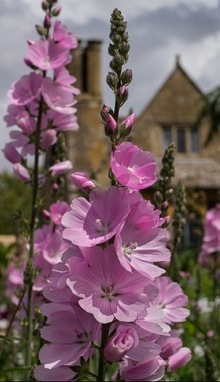 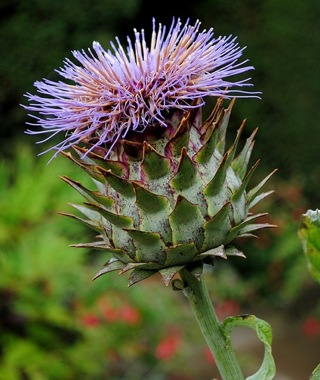 And everywhere you stand there is a faraway view, through the green architecture of trimmed hedges or arches, luring you on. 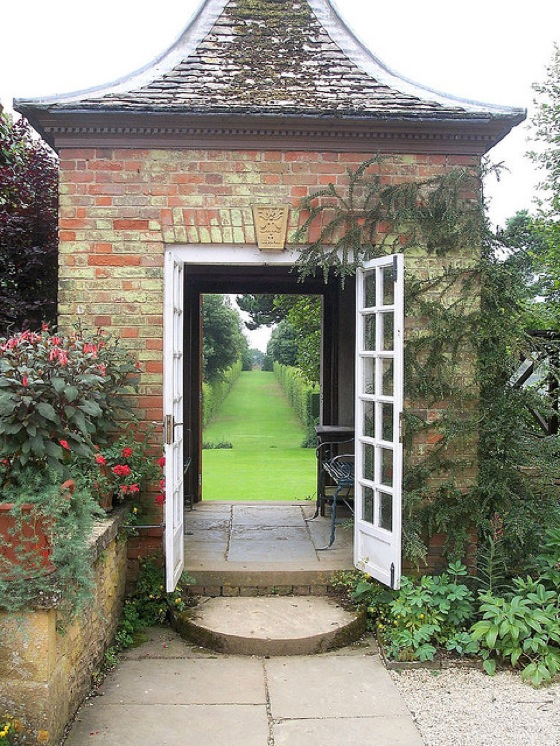 There is a large kitchen garden area, which during the Second World War supplied four local hospitals with produce.
Now it is used to propogate plants and shrubs.

During the Autumn and Winter periods a small army of gardeners trim the four miles of hedges and arches. 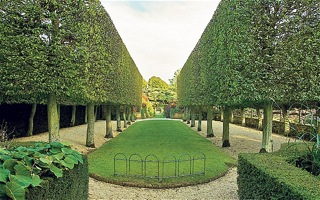 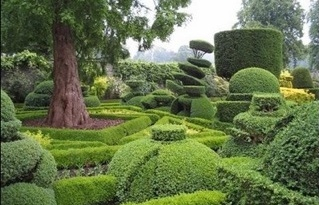 The planting at Hidcote is so planned that there is a constantly changing floral feast; whatever the weather, colour can be found.
The Japanese Maples bring a brilliant display in Autumn. 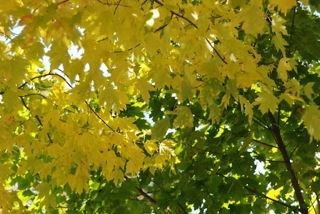 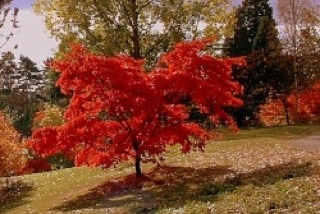 I hope this will give you some idea of the significance of Hidcote among our many world-famous English gardens.
Nevertheless, the man who designed this beautiful place remains an enigma.
His garden lies open before us, yet he avoided the limelight, and has left us little evidence of his plans and none of his feelings.
I should love to be able to walk alone at Hidcote.
I do not think Lawrence would be comfortable with the crowds of visitors. 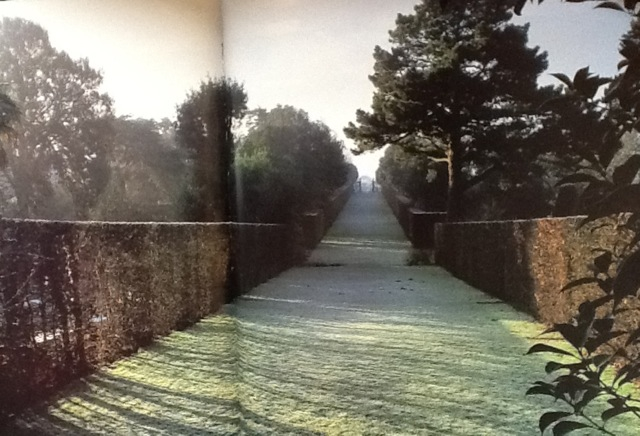 I like to think that perhaps, late at night or in the depth of winter, he has the garden to himself and can enjoy it as he used to, carrying a daschund under his arm, the others gambolling around him, feeling the soft spongy turf of the Long Walk beneath his feet and heading heavenwards through the beautiful ironwork gate.
< PrevNext >