Many years ago, I bought myself a book called 'Rest Lightly.'

It was written by a Professor Shore, and contains Ancient Greek and Roman epitaphs in their original form and with sensitive translations, as well as extremely interesting photographs of tombstones from the Romisch - Germanisches Museum in Cologne.
The collection there contains examples from the first to seventh centuries AD.

I have chosen my favourites, and would like to share them.
I decided to put them in the wordplay section, because there is a certain sad beauty about them that goes beyond normal prose.
Perhaps it would be good, before reading them, to look at the importance of tomb writings from the Graeco-Roman world.

When we consider for how long the Roman Empire flourished across the world, it would be easy to believe that we know a great deal about Roman lives.
In actual fact, although millions of people lived during that period, most of them left no trace of their existence behind.
We know perhaps more about the government, transport, entertainment, and architecture; but information about the lives of women and children, slaves and the working and lower classes is not easy to find; most of the literary record is about the patrician class.
There was a deliberate intention to preserve an elitist view of Roman civilization.

There were records of less important aspects of their lives, but many did not survive, being written on perishable materials such as leather, clay or papyrus.
The graffiti at Pompeii provided fascinating new insights into the everyday lives of ordinary citizens.
Tombstone inscriptions are among the most numerous and valuable written records to survive from Roman times.
Edith M.A.Kovach writes: " The timelessness and beauty of these epitaphs will immediately win the reader, making him/her aware of the everlastingness of human response to loss, suffering and grief.
They make us feel with the ancients as almost nothing else can."

I hope you will agree.

A ROMAN MATRON'S EPITAPH
Rome, near the bridge of St. Bartholomew 2nd century BC

Stranger, what I have to say is brief,
So pause and read.
This rude tomb holds a fair woman's bones.
Named Claudia by her parents, she loved her husband in her heart
And bore two sons, one of whom yet lives.
Refined in speech, gentle in manner,
She cared for her home, spun wool.
Farewell.

The married Roman woman was defined by her relationship to her husband, and her value was often determined by the fulfilment of certain expectations. 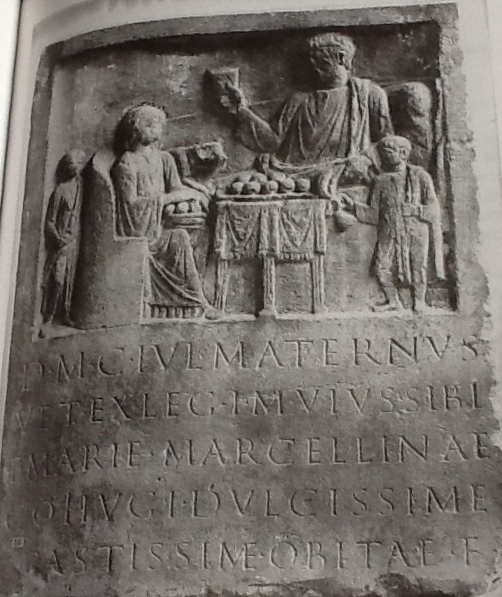 TO HIS BROTHER
Catullus

Many the nations and many the seas I traversed
To attend these sad funeral rites, my brother,
That I might honour you one last time
With an offering to the dead,
Speaking in vain to the silent ashes you have become.

Chance has taken you from me,
So prematurely carried off.
But now these offerings, in the custom of our fathers,
Are borne so sadly to your grave.
Receive them, bathed in your brother's tears,
And hear my greeting and farewell Forever. 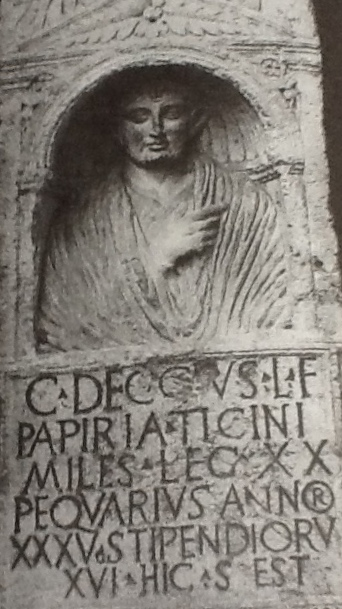 ON THE DEATH OF A LITTLE GIRL
Martial

My parents Fronto and Flacilla,
I commend to you
This girl, my pet and my delight,
That Hell's shadows and the beast that guards its gate
May not frighten Erotion.
She would have been just six years old
Had she lived but six days more.
May she play among her elders with a light heart
And in a childish voice call out my name.
O loam, press gently on her tender bones,
nor earth, shall you have rested heavily on her,
For gently she trod on you.

Tradition says that this little girl was the daughter of one of Martial's slaves, who died young and is on her way to join Martial's parents ( and thus, probably, her grandparents ) in the underworld.

This is only an excerpt from an inscription which goes far beyond the typical formula.

Here rests Perusina, who although she may not
Have seemed more precious or looked far different from other women,
Yet had great industry within her body's modest vessel.
"Cruel guide of Fate and harsh Persephone,
Why do you despoil the good while evils prevail?"
Everyone asks, and I am wearied with answering,
The gentle signs of her soul provoke our tears.

She was strong, inviolable, steadfast, blameless, a most faithful overseer.
Elegant at home, and elegant enough in public,
She stood out from the crowd.
She could manage all affairs; of few words,
She was above reproach.
She left the marriage bed first, and journeyed to her repose
With every household detail in order. [ She was first up in the morning, and last to get to bed]
Wool never left her hands without due cause.
No one surpassed her in obedience
And sound conduct.
She did not seek to please herself, took no liberties,
Fair, with lovely eyes and golden hair,
Her face retained a pale beauty
Which( they say ) no mortal had possessed...

Certainly a woman who made her mark!
The reference to physical characteristics is very unusual. 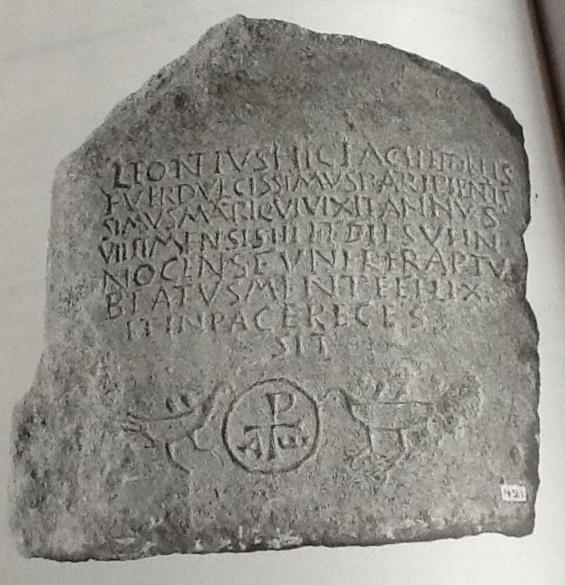 The last tombstone carries christian symbols.
It is from the second half of the third century.

The book is full of epitaphs; I hope you liked the ones I chose.

If it tells us anything, it is that all humankind, across the miles and centuries, and in spite of cultural differences, has much in common...
< PrevNext >