From the very beginning I loved School.
I loved to learn about the world, I found reading and writing easy, I learnt poems and songs and dances, and I enjoyed all the new materials, paints and slates and scissors and pencils and glue. 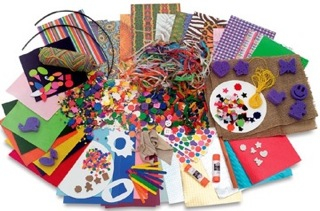 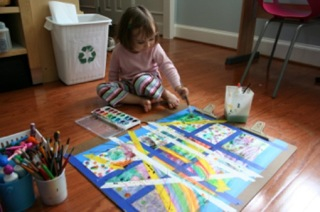 But I did not take easily to Sums.
Particularly Times Tables.
When I was in Junior School we would stand up in the aisles and chant them out loud, every day, and I had a protective procedure.
I knew them until the seven and eight and nine times bit.
Ten times was fine, and the eleven and twelve times came in a little burst at the end of the song.
But the middle was a mystery.
When we got to six times, I would take out my handkerchief and blow my nose, so the teacher couldnt see what I was saying.
I dont think I ever said them all through.

I can still remember my very first Examination.
It was in Infant School, and I was six.
It was a simple but very serious affair.
There were twenty marks for Composition, Scripture, Arithmetic and Dictation, and ten marks each for Spelling and Mental Arithmetic (maybe there were other subjects, but I dont remember them).
I got full marks for everything except Mental Arithmetic, for which I got nine out of ten.

I was mortified!
Even though I was Top, and got a book for a prize, I felt that I had failed miserably. 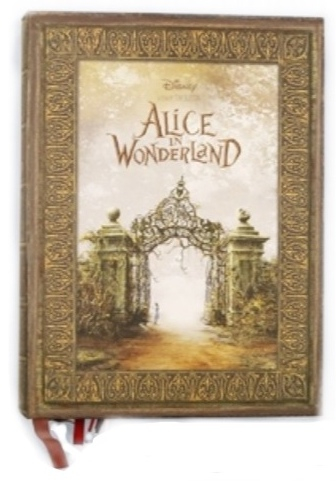 It got worse.
In Junior School in those days we had Problems.
They were about trains travelling at certain speeds, baths which had holes in them, shopkeepers selling apples at certain prices, curtains for kitchens, bricks for imaginary walls, tins of paint for doors; all kinds of things had to be worked out, costs and profits and dates and times and weights and sizes.

I simply could not work up an enthusiasm for any of it.
I actually grew up not understanding how to do Subtraction sums; when the number at the bottom was bigger than the one at the top, I would panic.
I never saw the whole sum, just dealt with one number at a time, and it seemed impossible.

At least in Geometry I could draw beautiful diagrams, but the Q.E.D was a hit or miss affair.

How I ever got my School Certificate in Maths., I shall never know.
It was a Miracle rather than a Mystery.

All of this is leading up to a really brilliant book I got some years ago in a charity shop.
It is called "Why do Buses come in Threes?" 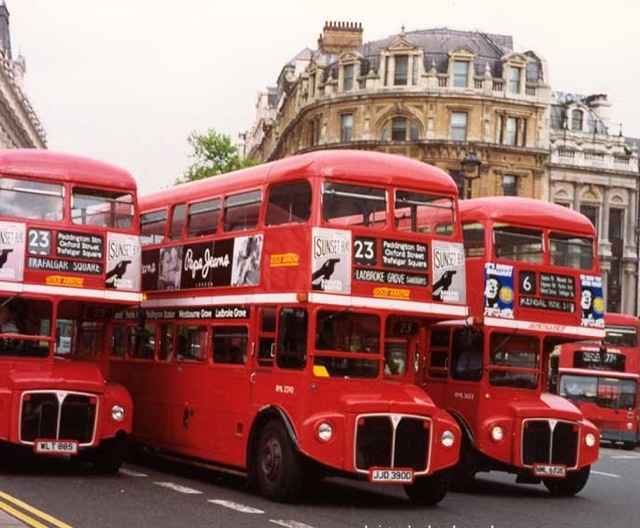 It is real maths., and it is very,very interesting.
It shows how maths. is useful in all kinds of puzzling situations.
I have chosen some problems which are solved in this book.
The first is:
What is the best way to cut a cake?

Now, that is a real problem.
1 When you have an odd number of visitors, and a square cake with icing and marzipan,how can you give everyone a piece of equal volume and with the right share of icing and marzipan?

It is easy!
First count your guests.
Let us say there are seven.
Now mark out the perimeter of the square into seven equal lengths. 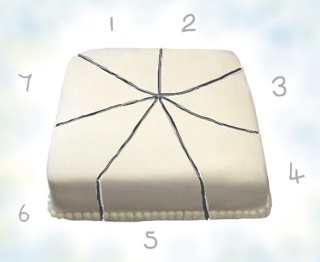 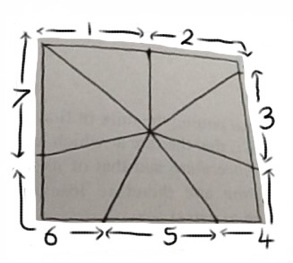 Locate the centre of the cake.
Cut from the perimeter marks to the centre.
You will have seven pieces, equal in volume though not symmetrical.
This works with any cake which is a regular polygon.


Cutting one cream cake between two.

How do you make sure that your two children believe they are treated fairly if you have only one cream cake between them?
It is easy!
(This is as much psychology as mathematics). 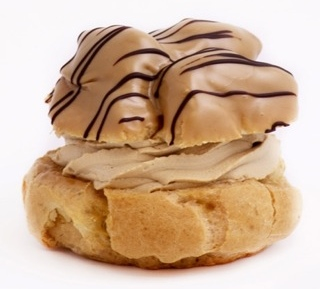 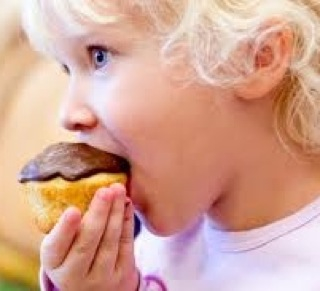 Tell them that one can cut, and the other can choose which of the two pieces they want.
The one who cuts will think very hard, and try very hard to be fair.
The one who chooses will choose very carefully.
Each will be satisfied.
In fact, the chooser will probably think their piece is the biggest!


The next problem is: Why do buses come in threes?
Or do they?
Buses do bunch.
This is NOT because the bus company is incompetent.
Even if the buses leave the depot precisely every fifteen minutes, the passengers are not predictable.
They arrive randomly. 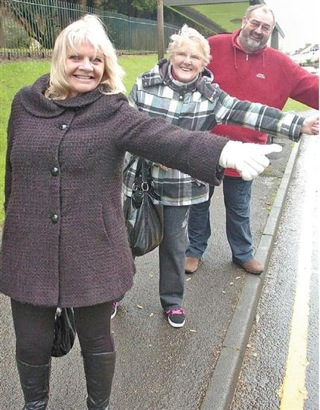 It is likely that at some time on the route a whole group of passengers will arrive at once, and as they have to pay this will slow the bus down.
Meanwhile more passengers collect at the next stop.
This will slow the bus more.
The second bus is by now closer to the one ahead, and because there is less time for passengers to collect at the stops, it can go faster.
The second bus can often catch up with the first.
If bunches of three happen, they most likely appear at the end of a long route.

Ironically, the 'best' routes, those with a frequent service, can be the ones with the worst reputation for bunching.


There are some interesting and entertaining tricks with numbers in the book, too.
You may well know the first one.
Until today I didn't know how it was done.

I KNOW WHAT YOU ARE THINKING OF
This is what you say to your victim: Think of a number between 1 and 10.
DONT TELL ME!

Think of an animal beginning with your letter.
And the answer?
An Elephant! 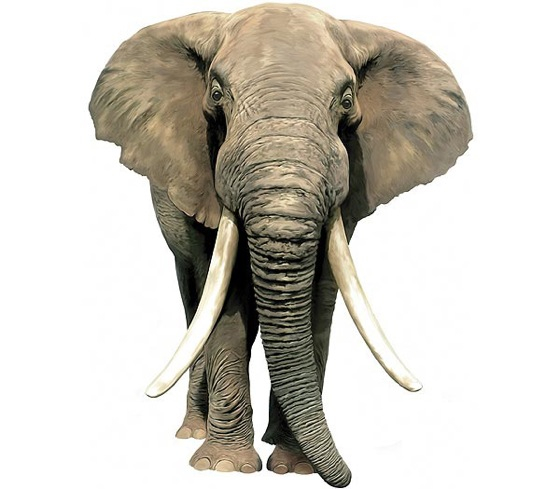 How does this work?

It is simple, when you know.
All the numbers in the nine times table have digits which add up to nine.
When you multiply any number by nine, and add the numbers resulting, you will get nine.

Unless your victim is very unusual, the first animal beginning with E he thinks of will be...
An ELEPHANT.

IVE GOT YOUR NUMBER

Here is a trick for which you need to prepare four cards.
Make sure you have the numbers correct! Here they are. 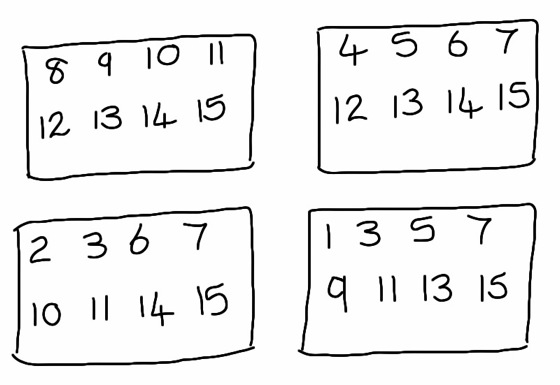 (Please excuse the diagrams-- they are freehand on the ipad and very wobbly!)

Ask the volunteer to pick any number from 1 to 15 inclusive.
Show him each of the four cards and ask if his number is on the card.
Then tell him what his number was.

You will always be right.
All you have to do is to add up the top left numbers of the cards on which the volunteer said his number appeared.
For example: if he chose 13, this appears on the 1st, 2nd and 4th cards, so you add 8, 4 and 1 and get 13.
It will always work!

MAGIC SQUARE
Finally, the Magic Square.
This is my favourite! First, make a large copy of this square.
Be very careful to copy accurately. 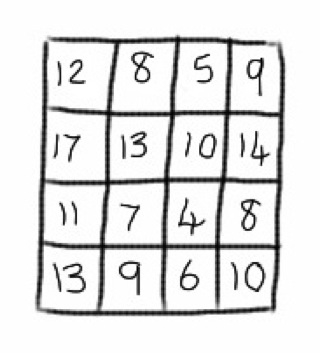 Next, secretly write the number 39 on a piece of paper and seal it in an envelope.
Give the envelope to your assistant.
Now have four coloured pens or crayons (red, yellow, green and blue would be good.)
Ask for four volunteers and give each one a crayon.
Stand them in front of the Magic Square.
Each one in turn must choose, first a row and then a column and draw a coloured line through them.
They have a free choice to knock out any row and any column.
Emphasize the fact that there has been complete freedom of choice.
When they have finished, it will look something like this. 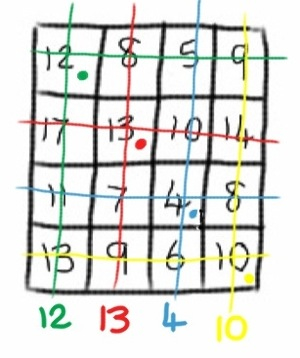 Now add up the four numbers where the two red, two yellow, two green and two blue lines meet.
The answer will be 39.

How do you prepare the square?
You put these numbers outside the square. 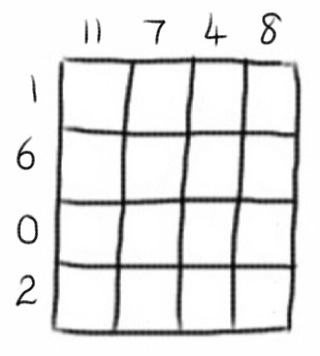 WOW!
Numbers are more interesting than I thought!
< PrevNext >