Wild Flowers and their Stories 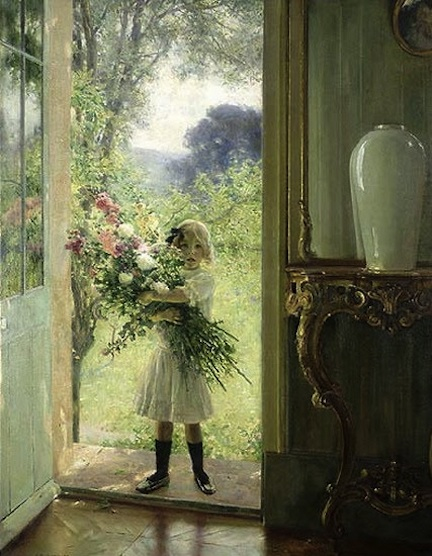 I have always thought that weeds and wild flowers are not sufficiently appreciated.
When I was a little girl, and we went as a family on a Sunday expedition to the Sussex Downs, one of my first and greatest pleasures was to search for wild flowers and make a posy for my mother.
There were, I remember, many different varieties, most of them lying low on the spongy turf because of the prevailing winds.
We played with some of them. 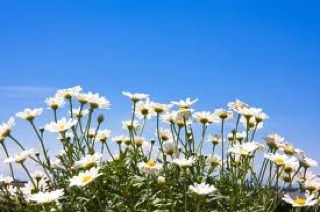 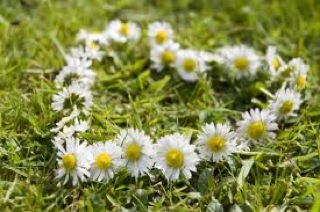 Obviously, we made daisy-chains.
We would hang them round our necks and decorate the trees.
I loved the ones with pink-tipped petals.
We would pull the petals off one by one, chanting "he loves me, he loves me not": the last petal would give the answer!
It is said that, when you can put your foot on seven daisies at once, Summer has arrived.


With the plantain(left) we made a weapon! 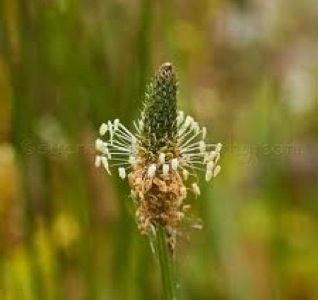 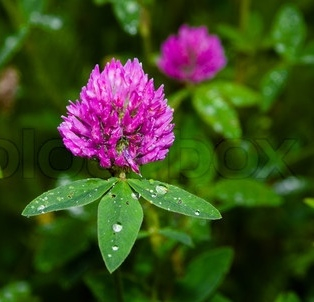 We would bend the stem over in a loop behind the fat head, hold the loop tight and pull hard.
The head would fly through the air at its target; great fun, except perhaps for the unsuspecting victim!
The plantain was highly regarded in ancient times for its medicinal properties.
The Anglo-Saxon word for it was( roughly translated) 'Waybread'.
It was used against venomous snake bites, and as a salve for inflammation, ulcers, sores and burns.
The flowering spikes were used to feed caged birds.
In the colonies, because plantain seemed to follow the Europeans around the world, it was called ' white man's foot' by the native population.

Clover, particularly red clover, has sweet flowers,and is sometimes known as Honeystalk or Sugar-plum.
It has a high lime content and was used by herbalists to cleanse the blood and restore fertility.
A syrup made from the flowers was used to ease whooping-cough.


I fondly remember scabious and cornflowers. 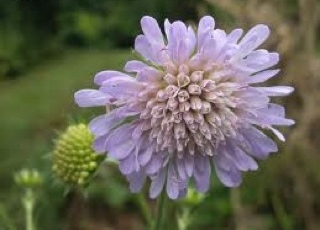 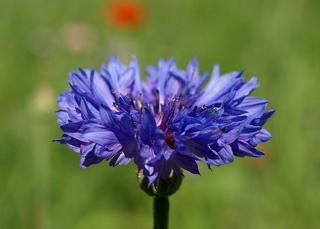 Scabious was thought to heal all kinds of skin conditions( the Latin word is scabies, from which we get 'scab')
Culpepper, the herbalist, applied the fresh plant to carbuncles, which he said would virtually disappear 'in three hours space.'
Cornflowers are given different names in different parts of the country: Cornbottle was the victorian name.
The Latin name for cornflower, centaurea cyanus, refers to the mythological centaur Chiron, who showed mankind how to use medicinal herbs and who used this one to heal wounds.
The intense blue dye from cornflowers was used in ink and paint, and cornflowers add colour to pot-pourri.
A young suitor would carry one in his pocket, and if it stayed fresh he would 'know' that he and his sweetheart would stay together. 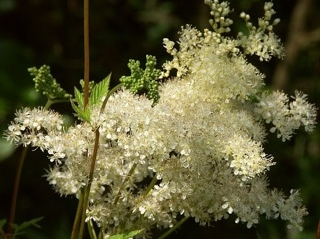 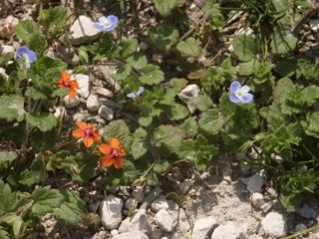 Meadowsweet, with its rich sweet smell, was used as a strewing-herb in mediaeval halls and chambers.
It was called 'meadwort' because its flowers were used to flavour mead.
The Greek name for the pimpernel is 'anagallis' from the word meaning 'to laugh' because it was believed to lift depression.
As well as relieving melancholy, it was thought to cure mad dog-bites.
In the 18th and 19th centuries it was applied in 'pimpernel-water' to improve the complexion. 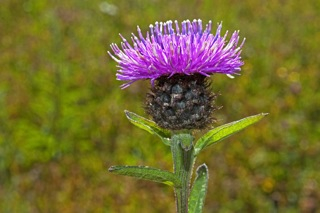 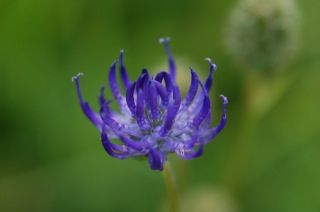 These I recognise, but cannot name.
A thistle with no prickles(?) which sat very low in a rosette of leaves, and a beautiful deep blue flower whose name I still do not know. 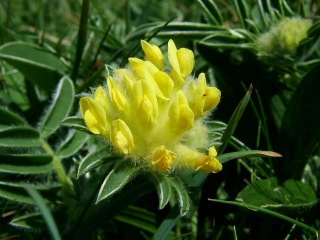 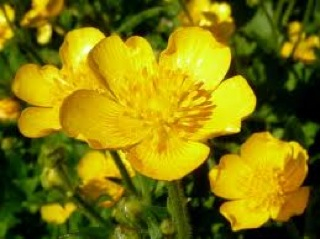 There was kidney vetch with its woolly yellow cushion-head, and the buttercup, held beneath Mum's chin to find out if she liked butter (she always did!).

It saddens me that so many modern children have never heard of this trick, which was played for so many years.
I used to look carefully, every time, for the yellow sheen under my mother's chin.
Grazing animals avoid buttercups, because of their bitter taste. 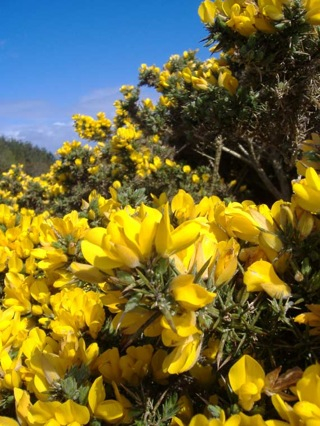 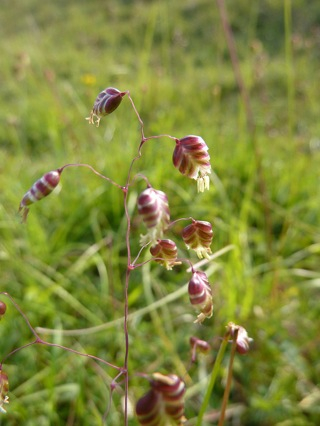 I particularly loved the gorse bushes, which gave shelter from the wind and were always bright with blossom, even in cold weather.
My father told me that "When the gorse is in bloom, it's kissing time."
Which means that kissing is always on the menu!
The other favourite was totter-grass, which I have talked about before.
Such a pretty, delicate grass, with always a flush of pink to warm the green.
There was always a vase of it on my bedroom mantelpiece, with silver sweetpapers neatly wrapped round some of the little seedheads. Very pretty! 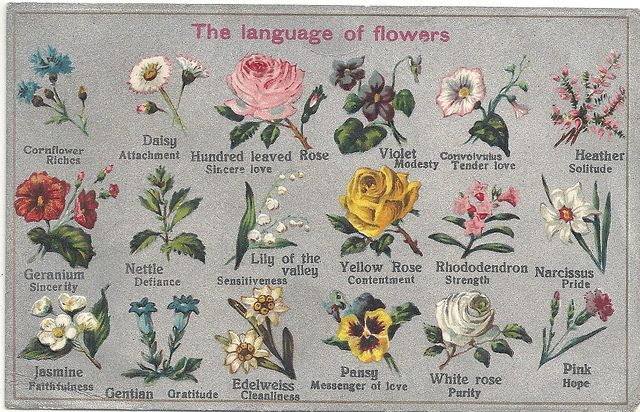 The Victorians made the idea of secret messages through the choice and wearing of flowers very fashionable.
To hand over flowers upside-down meant the meaning was reversed; to wear a corsage on your heart meant love, to wear it in your hair advised caution.
Every flower, however humble, carried a secret meaning.....

Wild flowers are treated as the Cinderellas of nature; they are smaller, are less showy, give out less perfume and have a shorter blossoming period than their more strident, highly-bred garden relations.
But they are absolutely essential to the practice of homeopathy and herbalism.

And they are delicate and sensitive, like the shy child in the family.
For me as a child, they were freely available, and I loved them. 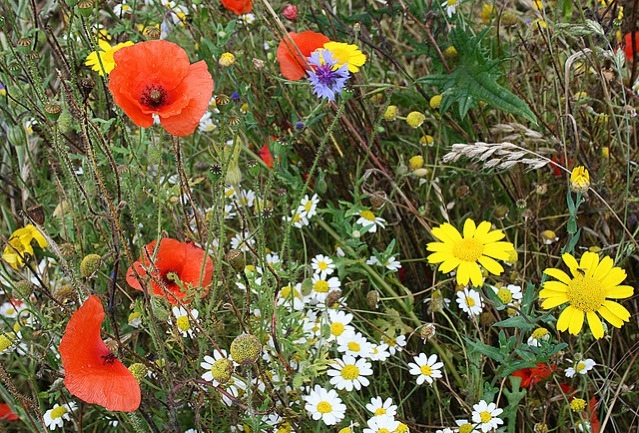