This is one of my favourite Bible passages: 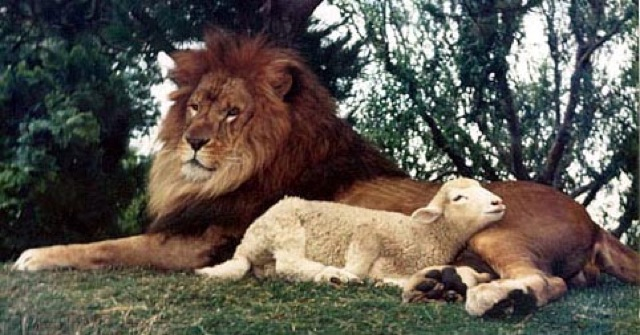 Isaiah 11:6-9
The wolf also shall dwell with the lamb, and the leopard shall lie down with the kid; and the calf and the young lion and the fatling together; and a little child shall lead them. 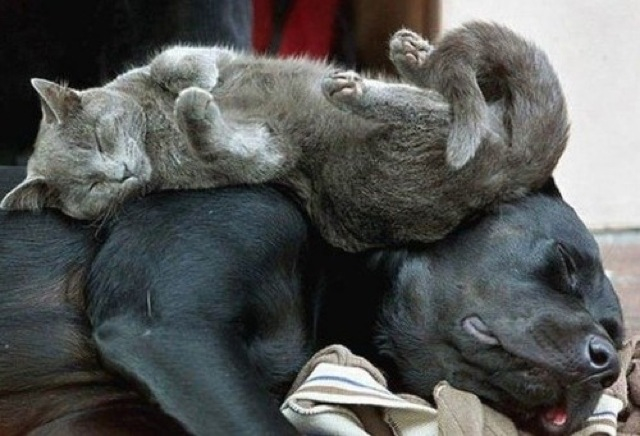 How lovely to live in a world where the creatures were not at war with one another, where the mouse would not fear the owl, where the tiger would befriend a wandering lamb, where the nestlings in my garden would be safe from the claws of the neighbour's cat.
Perhaps we should all be vegetarians?

I have always kept cats and dogs together, and they slept together and maintained friendly relations. 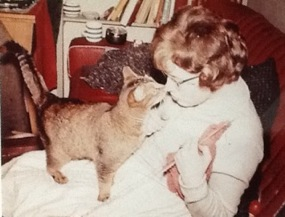 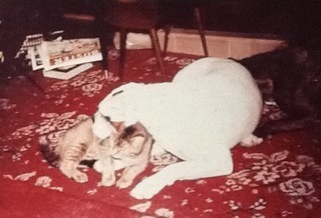 Here are some truly amazing stories of unlikely friendships between animals. 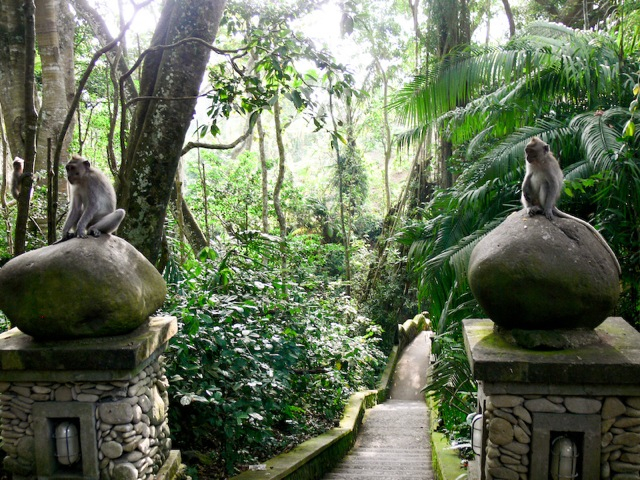 On the Indonesian island of Bali there is a sacred forest which is home to hundreds of Macaque monkeys.
They clamber over the ancient ruins of a Hindu temple, and many of the local villagers believe they guard the holy site against evil spirits. 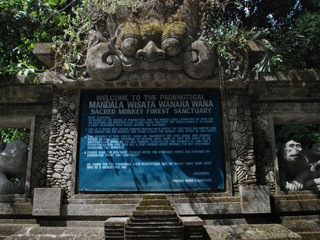 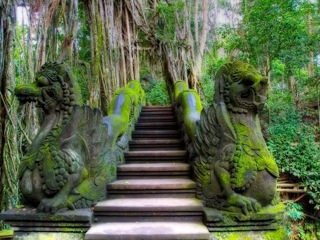 The monkeys live in four groups, called troops, each with its own hierarchy.
From time to time other animals wander into the area.
This is the story of a friendship which grew up between one of the monkeys and a stray kitten.
The relationship seemed extraordinary to those who observed it.
One of the many holiday visitors wrote: "The pair had been together for days.
When the staff tried to rescue the kitten, it would just run back to the monkey, which would groom it, nuzzle it, and lay his head on it as if on a pillow." 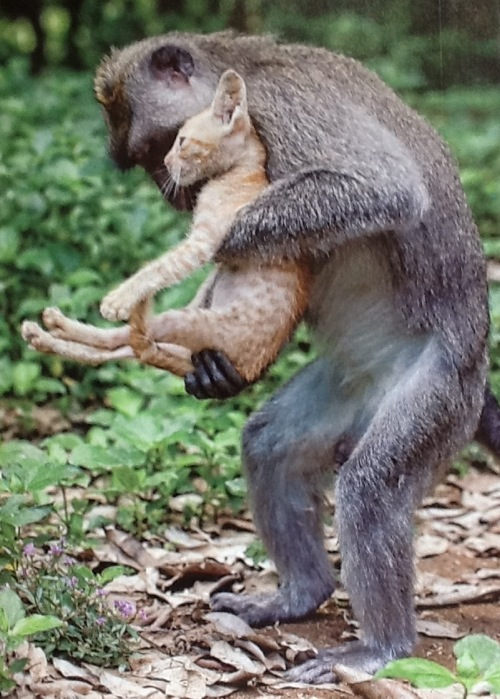 The monkey would carry his friend about like a doll, and pet it constantly.
He was not an alpha male, and was maybe lonely.
Perhaps the kitten was seeking affection and parenting?
They both found something they lacked in the temple ruins at Ubud, and many visitors found their constant attachment really touching. 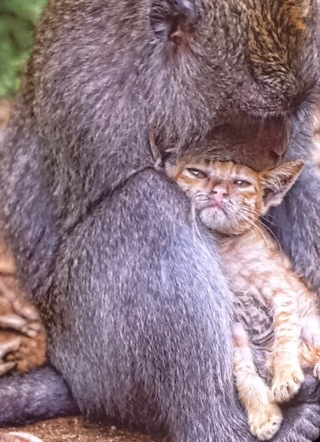 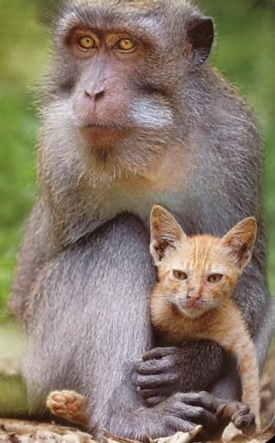 2 THE POT - BELLIED PIGLET and the RHODESIAN RIDGEBACK 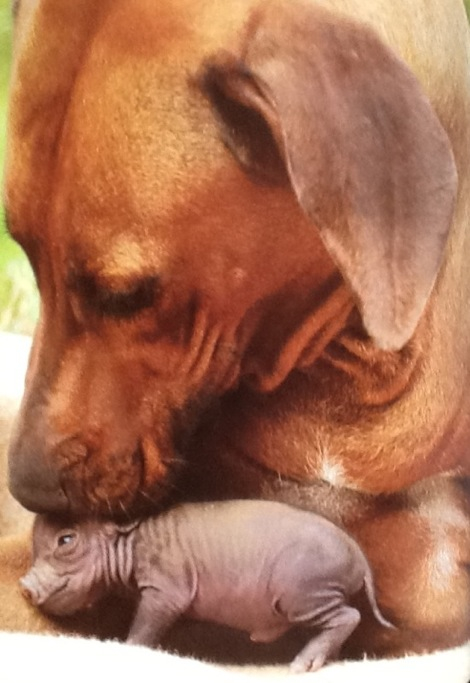 This is a story from Germany.
One freezing cold night a landowner in Hoerstel discovered a pair of newborn piglets on his 20-acre estate.
One had already died of exposure: the other squirming little creature was chilled to the bone.
They were the young of a pair of Vietnamese pot-bellied pigs.

He tucked the survivor under his sweater and took it into his house, which he shared with a large Rhodesian ridgeback, Katjinga, who had recently weaned her own family of pups.
The piglet, named Paulinchen, was handed over to Katjinga, who immediately washed and cared for her as if she were her own.
The piglet actually tried to suckle, but unfortunately the milk supply had dried up (she had to be bottle-fed.)

She slept cuddled up to her new 'parent' and they were inseparable.
Their relationship for the next fortnight was that of mother and child, and Katjinga undoubtedly saved Paulinchen's life.
When she later joined her true family, the piglet was always different from the others.
She would answer her name, and come to Katjinga for a nuzzle before going back to her true mother. 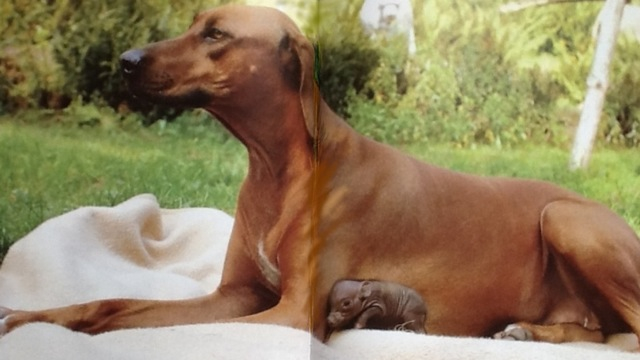 3 THE HIPPO and the GIANT TORTOISE

This story is from Kenya.
It is of a really strange friendship.
When the terrible tsunami of December 2004 hit the Kenyan coast, a group of hippos who were wallowing in the mud of the Sabaki River were swept away by the waters; at least, almost all of them were killed.
There was one survivor, a 600-pound baby.
With enormous effort the villagers captured baby Owen and transported him to the Haller Park Wildlife Sanctuary in Mombasa.
Because hippos have the reputation of being aggressive and bad-tempered, Owen was put in an enclosure with small, gentle animals, bushbucks and vervet monkeys.

As it happened, there was also an Aldabra giant tortoise, 130 years old,named Mzee.
This is when something really strange happened.
Owen immediately went up to Mzee and crouched down beside him, as though he were hiding behing a great boulder.
Mzee moved away as if annoyed, but the baby hippo persisted.
By the next morning, they were managing an awkward sort of cuddle.
Hippo babies stay with their mothers for 4 years, learning how to be a hippo. Owen began to be a tortoise. 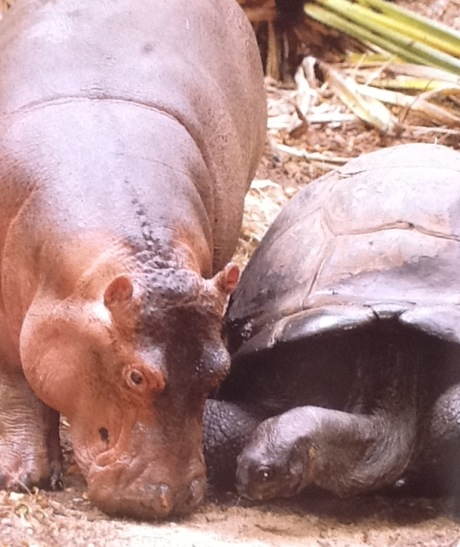 The manager of the Sanctuary describes how he began to copy Mzee's feeding behaviour.
He would chew on the same grasses, wallow with him in the pond, and learnt to be active in daylight.
The two unlikely friends would sleep together side by side, fat little body against worn old shell.
Owen would be protective of his reptile companion, and would lick his face as the tortoise rested his head on Owen's soft belly.
They even learnt to communicate with rumbling sounds, unusual in either animal, and would nudge each others' feet or tails to encourage movement in the right direction!


4 THE CAT and the COCKATOO

Lucky was a stray cat.
He was fortunate enough to be rescued by a couple in Savannah, Georgia.
They already possessed Coco, a very outspoken cockatoo.
Cockatoos have very sharp talons and strong beaks and are quite territorial.
The pair first met when Coco flew into the bedroom.
Lucky was underneath the bed.
The owners were quite nervous, but they needn't have worried!
It was a very happy meeting.
Coco first rubbed Lucky with one foot, then walked to and fro over her head.
The meeting was recorded on camera and was popular for a while on the internet. 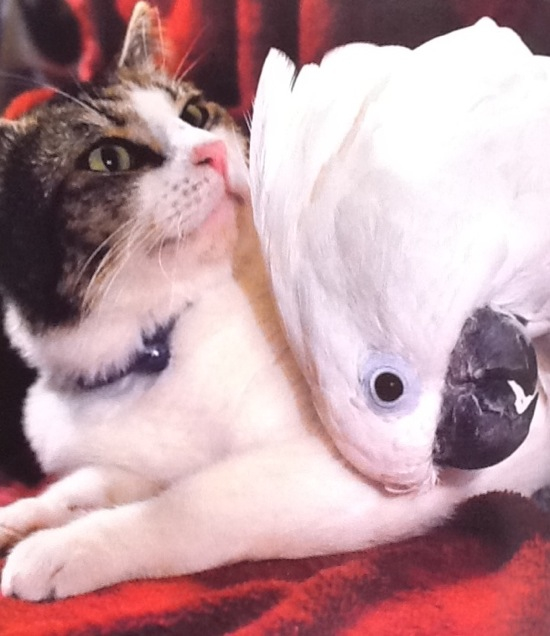 Despite the power of Coco's beak and claws, the two animals have continued to be affectionate companions.
Coco will poke her curled tongue into Lucky's ears, and she will knead and nuzzle her warm furry body with her strong feet.
At the end of each day, the two of them will sit together happily on their owners' laps, and cuddle up with the family's four dogs, all of them enjoying each others' company...
Quite a menagerie!


5 THE DUCKLING and the KOOKABURRA

This story is from the Seaview Wildlife Encounter, which is on the Isle of Wight.
In 2010 they had a six-week-old kookaburra there, living on his own.
He was rescued from his parents, who had killed several of their young.
The baby was called Kookie.

Meanwhile, a tiny teal duckling, who was unable to defend itself against the larger birds in one of the aviaries, was brought in, and it was decided to put it in with Kookie.
Although adult kookaburras would not hesitate to eat a tiny duck, Kookie was very young and should present no problem; and he was living a dull, solitary life at the time.
The instant the duckling was put int Kookie's enclosure, it immediately cuddled up to him, and tried to get under his wing.
Although not overly responsive, the kookabuurra was not aggressive, so that was fine.
They were going to be separated for the night, for safety. 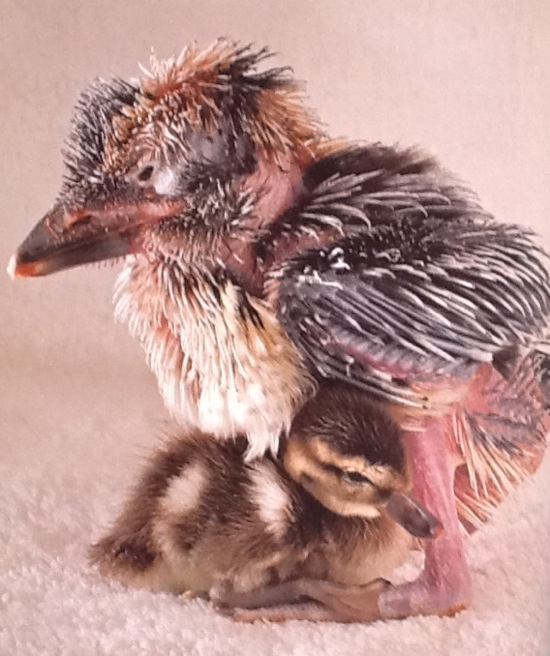 But the little duck jumped up and down at the door, wanting to get back under Kookie's wing.
In the morning, he went right back to cuddling the bigger bird.
Later, two more ducklings joined the 'family,' and soon they could all be seen sitting on Kookie, pushing under his wings, and poking his feathers with their beaks.
He seemed to take it all in his stride!


6 THE OWL and the SPANIEL

At a Bird-of-Prey Conservation Centre at Liskeard, Cornwall, they have a beautiful spaniel called Sophi.
Spaniels are natural hunters, and normally young birds would not be brought into the house; but one day an exception was made for a featherless owlet, christened Bramble, just too young to be left in an aviary.
Sophi was at the time three years old.
She jumped up on to the sofa to investigate the new arrival, and at once started licking Bramble's beak.
From that moment it became a daily ritual.
The two creatures would 'kiss' each other, Bramble using her beak, Sophi her tongue.
In the evening, they would fall asleep together on the carpet in front of the fire. 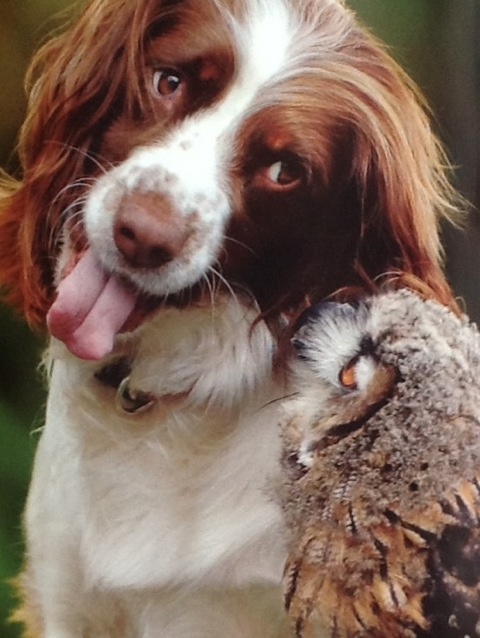 Although Bramble eventually went back into the aviary so that she could fly around, she would swoop down regularly to spend a mutual kissing and grooming session with Sophi.


7 THE RHESUS MONKEY and the DOVE

Off the Southern coast of China is an island where there is a Nature Reserve; there a number of animals, including pangolins, pythons and rhesus monkeys, are protected.
One day in September, 2007, a white dove landed there and lingered; it seemed to have lost its mate.
Because doves were seen in China as symbols of peace and long life, the staff adopted the bird, feeding it corn kernels and keeping it in an iron cage.
It became very tame.

One day, while patrolling the island, one of the staff came upon a baby monkey.
It was very weak,and unprotected, so it was taken back to the station, where it met the dove.
They became instant friends, delighting the staff with their behaviour.
They would snack on corn together, the dove pecking up the monkey's leavings, and at night they would sleep cosily side by side in the cage, using each other as pillow and blanket. 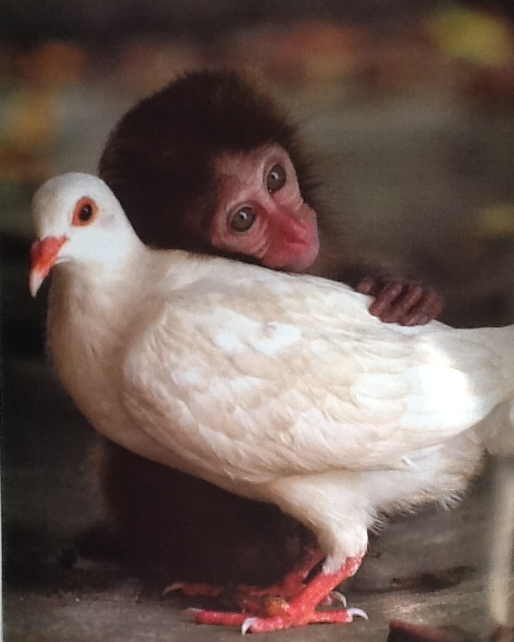 The monkey would stroke the bird's feathers, resting his head on her warm breast.
They made a charming and unusual pair!

I hope you have enjoyed this little collection of animal anecdotes.
< PrevNext >