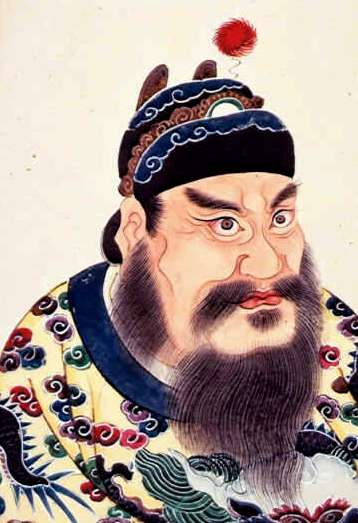 The largest and most important tomb site in China, that of the First Emperor, has not yet been excavated; it is believed that many years will pass before all the mysteries it contains will be uncovered.

For thousands of years the existence and nature of the site had been known from the Chinese written record.
However, although the official historian of the dynasty that overthrew Qin Shihuangdi has described the tomb in some detail, he did not mention an underground army; it was a complete surprise when hundreds upon hundreds of life-sized terra cotta statues
of soldiers, with chariots and horses, were discovered in 1974, over 1.5 km east of the tomb mound. 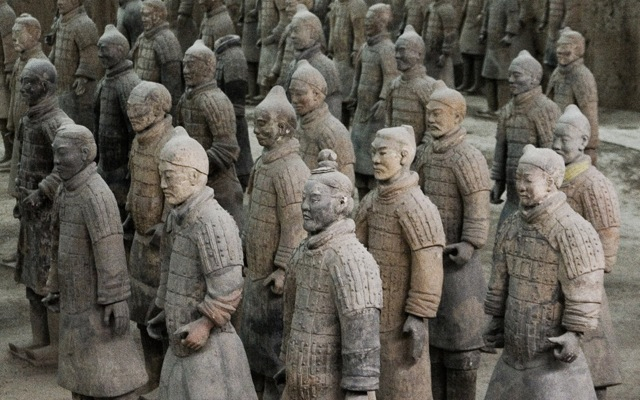 For 2000 years they had silently guarded the resting-place of one of the greatest military leaders in human history.
The figures vary in height according to their roles, with the tallest being the generals.
They include warriors, chariots and horses.
Current estimates are that in the three pits containing the Terracotta Army there were over 8,000 soldiers, 130 chariots with 520 horses and 150 cavalry horses, the majority of which are still buried in the pits near by Qin Shi Huang's mausoleum.

Other terracotta non-military figures were also found in other pits and they include officials, acrobats, strongmen and musicians. 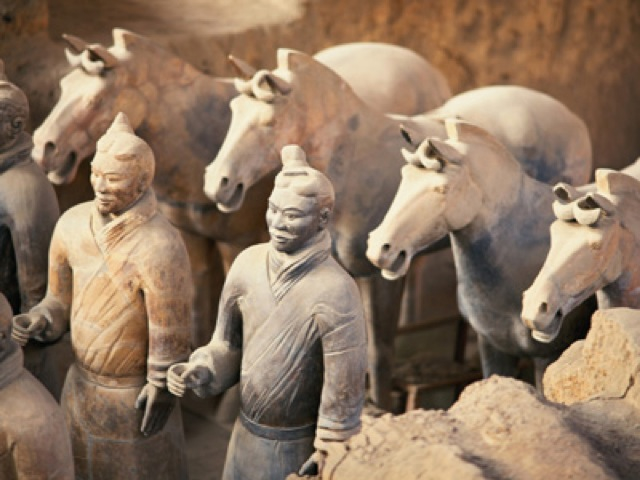 The Terracotta Army was discovered on 29 March 1974 to the east of Xi'an in Shaanxi province by a group of farmers when they were digging a water well around 1.6 km (1 mile) east of the Qin Emperor's tomb mound at Mount Li (Lishan), a region riddled with underground springs and watercourses.
For centuries, there had been occasional reports of pieces of terracotta figures and fragments of the Qin necropolis – roofing tiles, bricks, and chunks of masonry – having been dug up in the area.
This most recent discovery prompted Chinese archaeologists to investigate, and it was then that they unearthed the largest pottery figurine group ever found in China.
Hundreds upon hundreds of warriors, placed to the east of the tomb mound as if to defend it against attack from the east, where all the conquered states lay. 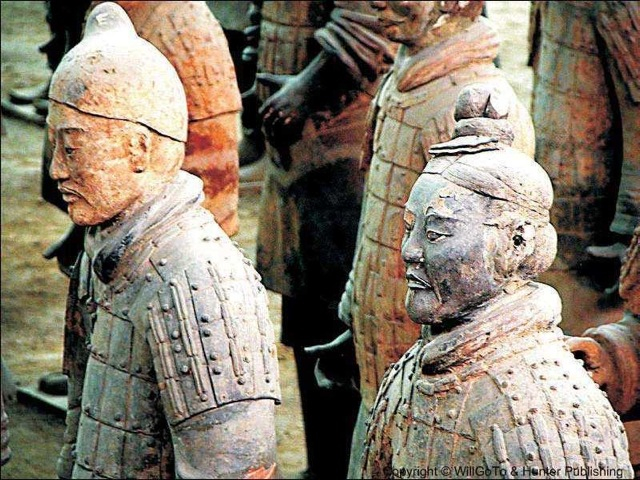 Cavalry and infantry, chariots and generals, ready to defend their Emperor.

They are an extraordinary sight, even without the weapons they would have originally held, and lacking the bright colours they were first given.
Both the costumes and the bodies of the soldiers were painted, using pigments mixed with lacquer and applied after firing.
Sadly, when the figures were excavated, the exposure to air resulted in the immediate loss of the colours, although small fragments remain.
After their excavation, the painted surface present on some figures of the terracotta army began to flake and fade.
In fact, the lacquer covering the paint can curl in 15 seconds once exposed to the dry air of Xi'an and can flake off in just four minutes. 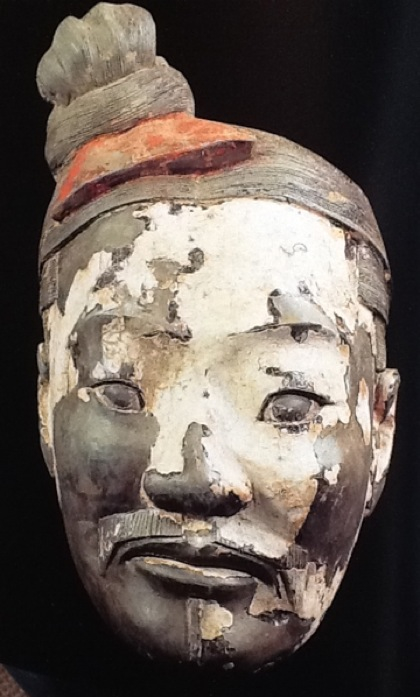 In addition to the warriors, an entire man-made necropolis for the Emperor has also been found around the first Emperor's tomb mound.
The tomb mound is located at the foot of Mount Li as an earthen pyramid, and Qin Shi Huangdi’s necropolis complex was constructed as a microcosm of his imperial palace or compound.
It consists of several offices, halls, stables and other structures placed around the tomb mound which is surrounded by two solidly built rammed earth walls with gateway entrances. 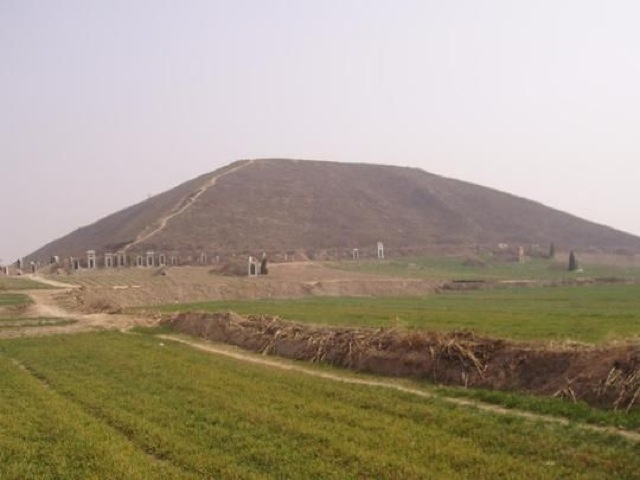 Much is still to be discovered here; the entire complex covers over 50 square km., and was intended to represent the universe over which the First Emperor ruled.
The army is but a part of the whole.
There are many hundreds of skeletons of both men and horses(if the terra cotta statues are portraits, could they be the sacrifices of the living models?)
Everything was provided for the Emperor's afterlife; there are strongmen and acrobats, civil officials and scribes.
One of the pits has rare birds and animals in rows of clay coffins, with clay dishes for food and clay collars attached to the animals.
In August 2001 a pit was discovered with a diverted underground river, containing terracotta musicians playing music to life-size bronze water-birds. 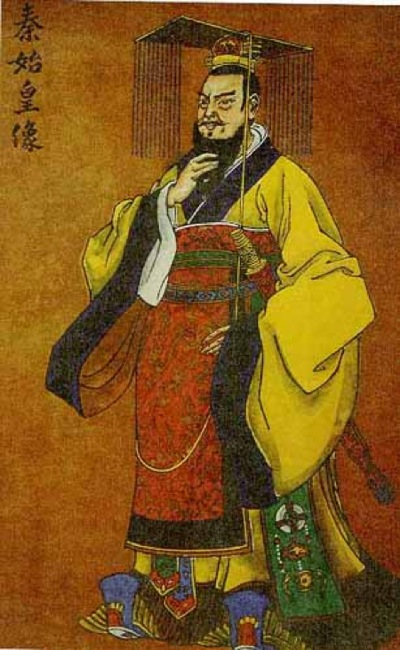 King Zheng of Qin was born in 259 BC and became King of the State of Qin when he was only 13.

China was then divided into many different kingdoms, many of which wasted time and energy in petty wars.
The Great Wall was then made of tamped earth, and was incomplete in parts. 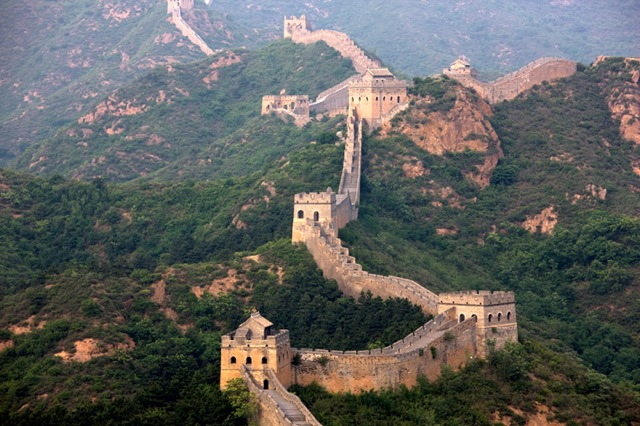 By the time he was 38, the warring states were unified and the Wall, although not yet of brick, was in one piece.

Gradually all the states were conquered and the country was unified under one rule.
The new Emperor travelled constantly around his land; he standardized script and weights and measures, and introduced a new law code and coinage system.
In one of the inscriptions on many stelae set up in his praise we read:

Great is the virtue of our Emperor
Who pacifies all four corners of the earth.
Who punishes traitors, roots out evil men
And, with profitable measures brings prosperity.
Tasks are done at the proper season,
All things flourish and grow;
The common people know peace
And have laid aside weapons and armour;
Kinsmen care for each other,
There are no robbers or thieves;
Men delight in his rule
All understanding the law and discipline.
The universe entire Is our Emperor's realm...

From the time he became King he started the construction of his tomb complex.
It is tantalising that the central tomb mound is as yet unexcavated.
It was a complete change in design from the previous shaft burials.

It was obviously an extraordinary, richly decorated and wonderfully designed royal tomb.

About a hundred years after its construction, a later Han-dynasty historian wrote:
"After the King won the Empire, more than seven hundred thousand conscripts from all parts of the country were working there.
They dug through three subterranean streams and poured molten copper for the outer coffin, and the tomb was filled with models of palaces and pavilions and offices, as well as fine vessels, precious stones and rarities.
Artisans were ordered to fix up crossbows, so that any thief breaking in would be shot.
All the country's streams, the Yellow River and the Yangtse were reproduced in quicksilver and by some mechanical means made to flow into a miniature ocean.
The heavenly constellations were shown above and the regions of the earth below.
The candles were made of whale oil to ensure their burning for the longest possible time."

We have to rely upon imaginary reconstructions to 'see' the inside of the tomb mound. 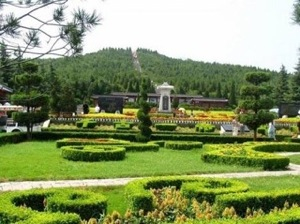 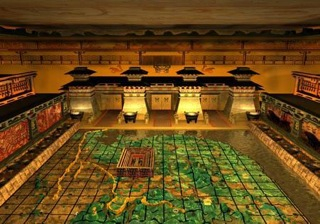 We can only wait until the archaeologists decide it is safe to begin the opening of the tomb of the First Emperor of China, knowing that it will be an amazing experience.
We can see and admire the great terra cotta army, which is only a small part of the Emperor's necropolis; if Carter, in Tutenkhamun's tomb, saw "Wonderful Things," what shall we finally uncover? 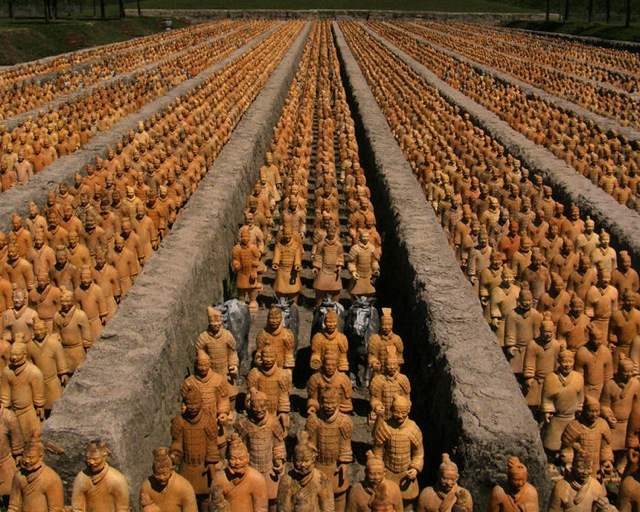