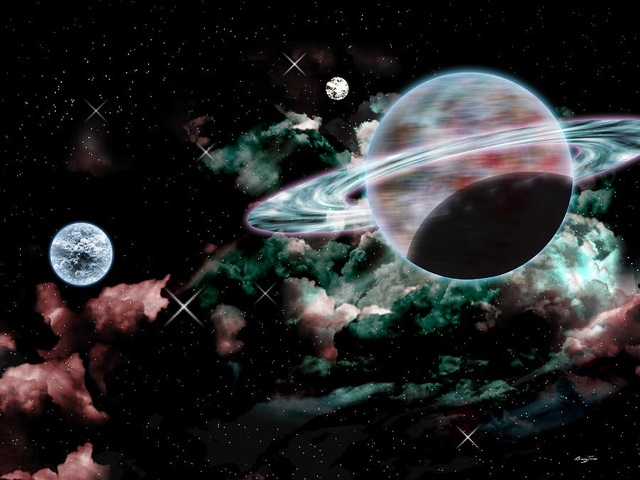 I have never been able to understand how anyone could think that the universe simply occurred accidentally.
Everywhere there is evidence (it seems to me) of structure, of inter- relationships, and above all of beauty and mystery beyond human comprehension.

Only recently, in looking at the world of mathematics, which I found so difficult as a child, I learnt about Leonardo Fabinacci. 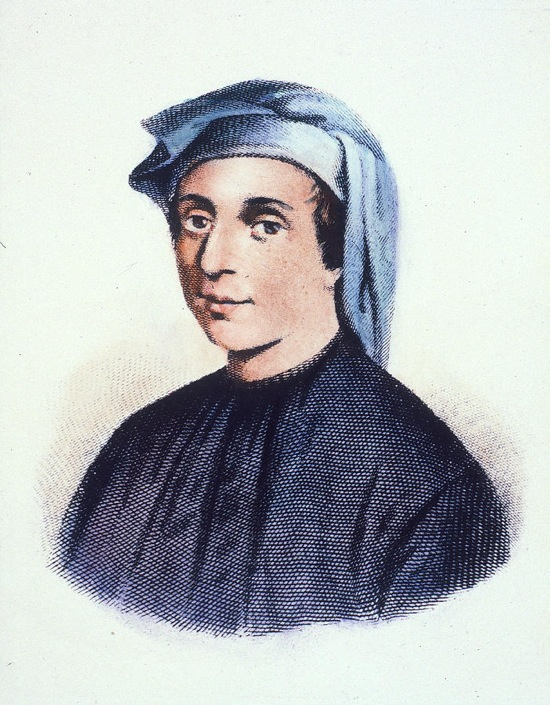 Often called the "greatest European mathematician of the middle ages", his full name was Leonardo of Pisa, or Leonardo Pisano in Italian since he was born in Pisa,Italy, the city with the famous Leaning Tower, about 1175 AD.
Pisa was an important commercial town in its day and had links with many Mediterranean ports.
Leonardo's father, Guglielmo Bonacci, was a kind of customs officer in the present-day Algerian town of Béjaïa.
So Leonardo grew up with a North African education under the Moors and later travelled extensively around the Mediterranean coast.
He would have met with many merchants and learned of their systems of doing arithmetic.
He was responsible for discovering what we now call the "Fibonacci Sequence."

Fibonacci is perhaps best known for this simple series of numbers, introduced in Liber abaci and later named the Fibonacci numbers in his honour.
The series begins with 0 and 1.
After that, use the simple rule: Add the last two numbers to get the next.
I have written the beginning of the sequence out for you below.
You might ask where it came from? In Fibonacci's day, mathematical competitions and challenges were common.
For example, in 1225 Fibonacci took part in a tournament at Pisa ordered by the emperor himself, Frederick II. It was in just this type of competition that the following problem arose:
Beginning with a single pair of rabbits, if every month each productive pair bears a new pair, which becomes productive when they are 1 month old, how many rabbits will there be after n months? 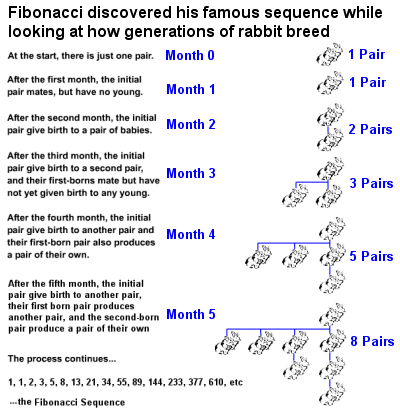 From this problem Fibonacci obtained the sequence, now one of the most well-known patterns of creation and present in nature in many ways, in petal numbers, spirals in pineapples, leaf growth, sunflower seeds and growth patterns in shells. 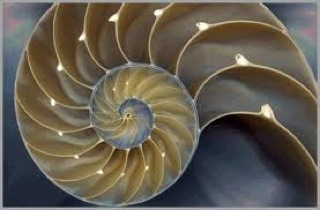 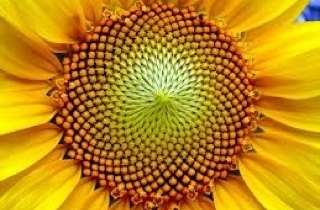 The Fibonacci numbers are Nature's numbering system.
They appear everywhere in Nature, from the leaf arrangement in plants, to the pattern of the florets of a flower, the bracts of a pinecone, or the scales of a pineapple.
The growth pattern of leaves on a climbing plant follows the Fibonacci order.
Indeed, the Fibonacci numbers are applicable to the growth and structure of a wide variety of living things, including a single cell, a grain of wheat, a hive of bees, and the human body. 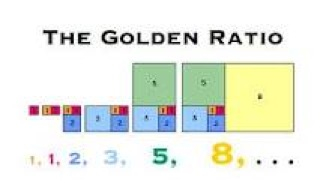 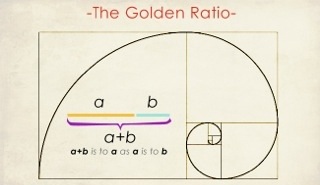 Here we see the sequence expressed in squares and spirals.
It is important to know that scientists do not accept the sequence as a universal law, but it occurs so often and in so many cases, even in DNA spirals, that artists, botanists, architects and manufacturers use 'golden mean calipers' to find harmony in design. 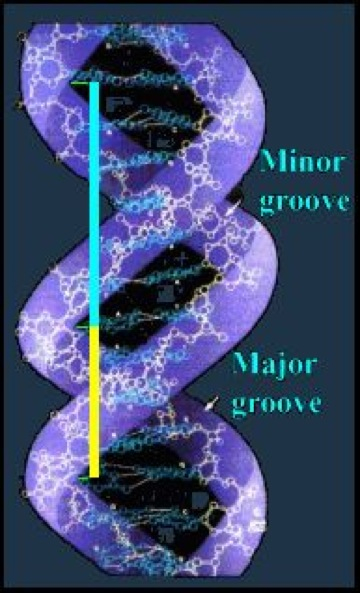 The sequence is found naturally occurring in all kinds of situations.
Where the sequence is found, there is beauty and order.
Many of the proportions of the Parthenon are said to exhibit the Golden Ratio.
Golden rectangles have been identified in the facade. 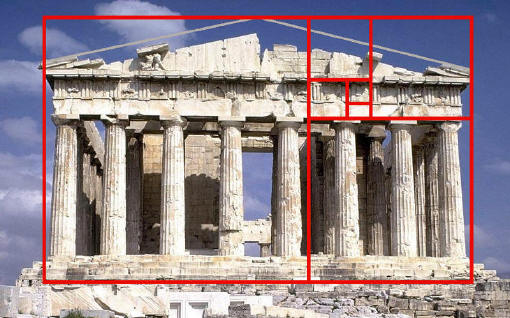 It is found in Salvador Dali's The Sacrament of the Last Supper.
Thr dimensions of the canvas are a golden rectangle.
A huge dodecahedron, in perspective so that edges appear in golden ratio to one another, is suspended above and behind Jesus and dominates the picture. 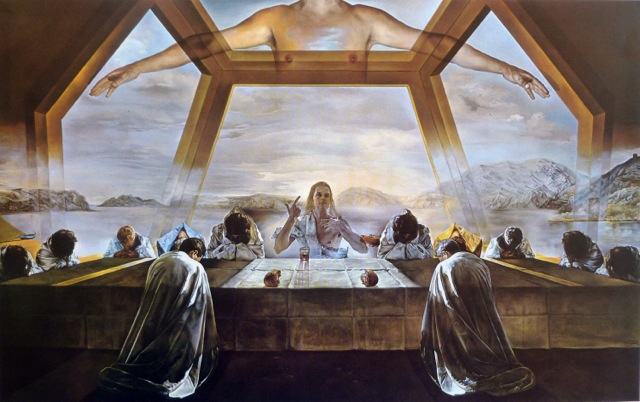 Le Corbusier, atchitect, explicitly used the golden ratio in his Modular system for the scale of architectural proportion.
He saw this system in Leonardo da Vinci's Vitruvian Man. 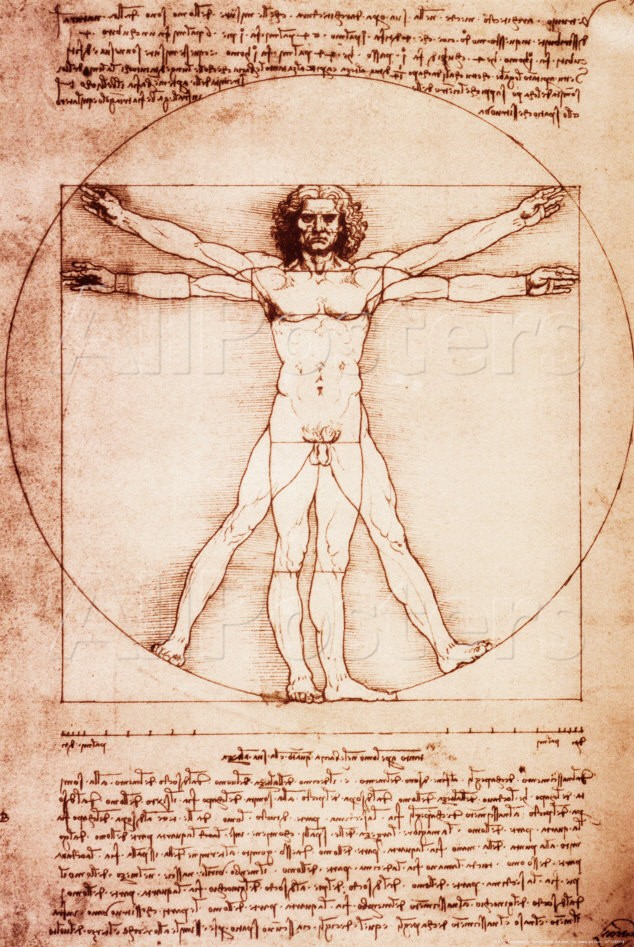 Throughout the centuries mathematicians, philosophers and scientists have tried to make sense of the universe, and there is a consensus in what they have concluded.
Pythagorus, Plato, Euclid, Fibonacci, and many others, in looking for truth, have called the answer different things; the Divine Proportion, the Golden Mean, the Harmonic Resonance, the Golden Ratio.

I have always attributed the beauty of the cosmos to God, because I believe the universe has been designed and is no accident.

WHAT IS THE GOLDEN RATIO?
Plato's Golden ratio is based upon a divided line.
The line is divided in two.
The ratio between the whole and the larger part must be that of the larger part to the shorter. Like this: 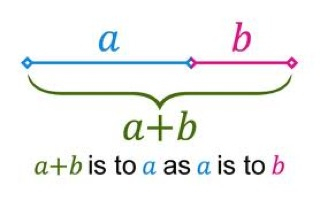 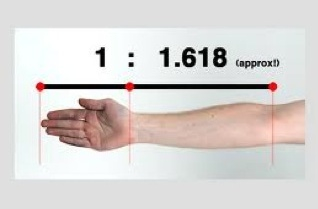 It is possible to measure pictures, buildings, human bodies, shells and indeed anything you consider beautiful in design and the Golden Ratio will be found. 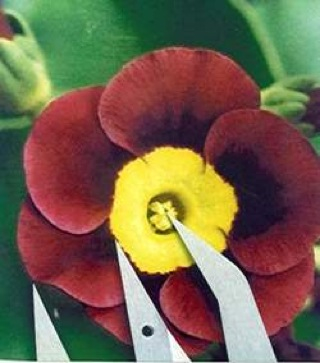 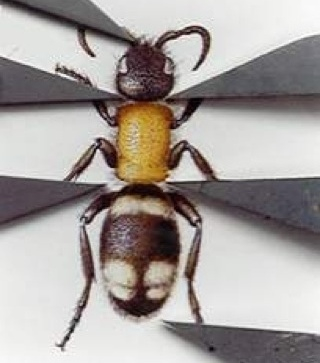 In the past famous artists and architects have been known to use Plato's ratio when at the designing stage, because the measurements are harmonious. These are Golden Mean Calipers. 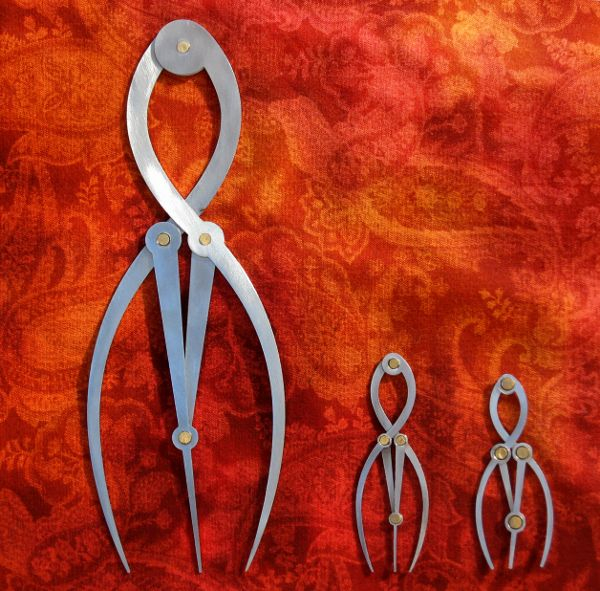 Using them, you can find Fibonacci's proportions in everything from great paintings to ancient architecture.
Even in your fingers!
And in the proportion of the human body and face. 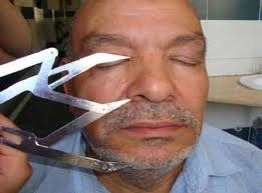 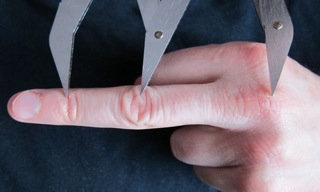 There are Golden measurements in many modern manufactured objects, credit cards, mobile phones and microwaves among them(all are frequently golden rectangles.)

In manmade things, unlike those in nature, we cannot always trace such a relationship to the designer's deliberate choice: sometimes it seems an instinctive thing: possibly we have been created with a sense of what is Golden, or Divine, proportion? 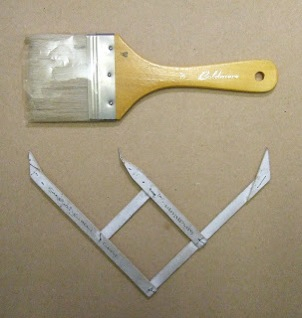 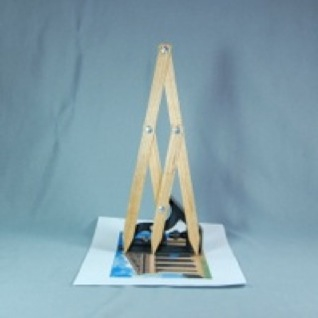 Even a paintbrush can have the Goldon Proportion!
As a child I hated sums and loved poetry.
Now I find that poetry and mathematics both have beauty.
The Fibonacci sequence and the Golden Mean are, it seems, universally apparent.
I just could not see them, I took them for granted.... 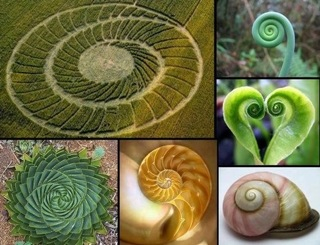 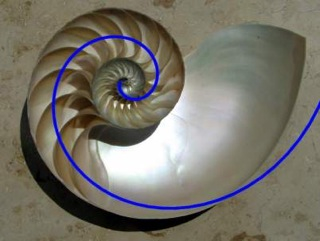 The golden ratio has fascinated Western intellectuals of diverse interests for at least 2,400 years.
According to Mario Livio: Some of the greatest mathematical minds of all ages, from Pythagoras and Euclid in ancient Greece, through the medieval Italian mathematician Leonardo of Pisa and the Renaissance astronomer Johannes Kepler, to present-day scientific figures such as Oxford physicist Roger Penrose, have spent endless hours over this simple ratio and its properties.
But the fascination with the Golden Ratio is not confined just to mathematicians.
Biologists, artists, musicians, historians, architects, psychologists, and even mystics have pondered and debated the basis of its ubiquity and appeal.
In fact, it is probably fair to say that the Golden Ratio has inspired thinkers of all disciplines like no other number in the history of mathematics. 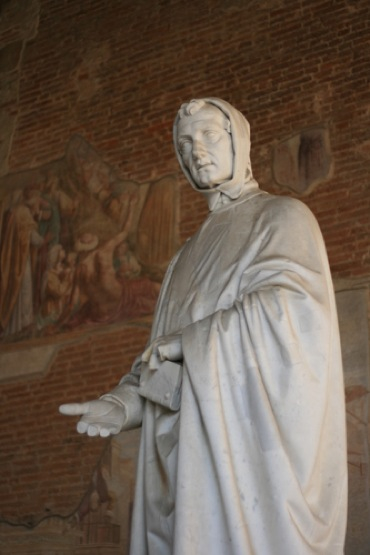 I am neither an intellectual nor a great mathematical mind, but I dont mind telling you I have been amazed and delighted by my introduction to Fibonacci and the Golden Ratio! 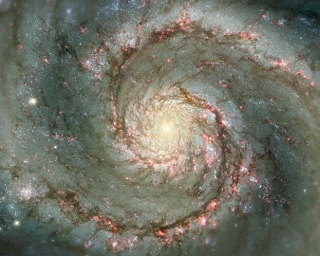 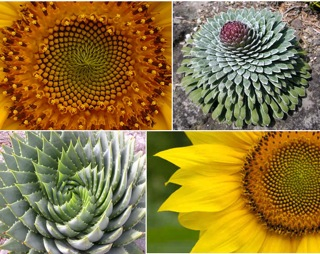