In November, 2005, it was the 400th anniversary of the Gunpowder Plot.

At the time I was leader of Sunday-school in All Hallows by the Tower, and knew several of the children who lived in the Tower (their fathers were yeoman warders), and often drew story-boards or designed paper costume-kits for the Education Department there.
This is the story-board for the lesson I gave at the time.
I used to work to the requirements of the Education Officer; my part was to produce the images, which I shall go through one by one.
There were, of course, activities during the lesson; we used to dress the children up in costume, and they handled artefacts and produced their own drama and drawings!
All the drawings are in pen and coloured pencil, and are on size A3 paper. 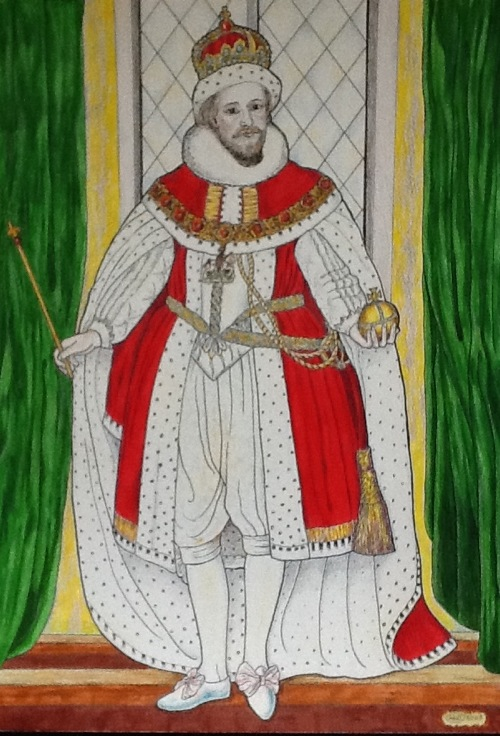 When King James came to the throne, the Roman Catholics in England had high hopes; they had been badly treated during Queen Elizabeth's reign, and James's mother, Mary Queen of Scots, had been a catholic, so they looked forward to a more peaceful time.
However, although James started off by relaxing the restrictions, plots against him were uncovered and he became less tolerant.
This is when Robert Catesby began his plot against the King. 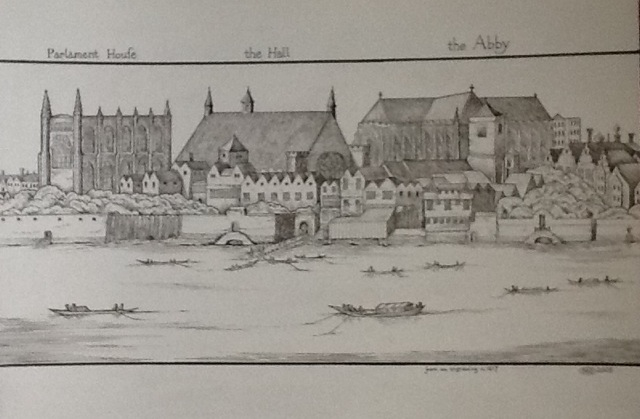 This is my copy of an engraving showing how the building would have looked in Guy Fawke's time.
The present Houses of Parliament were built between 1840 and 1870.
On occasion James 1 and all the Lords were in attendance, so by blowing up the building it would be possible to get rid of the monarch, the government and all the most influential men in society. 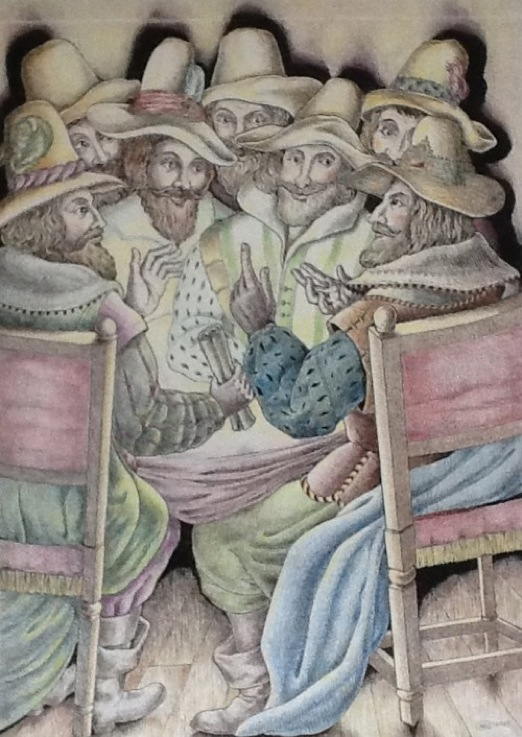 This is my favourite of all the pictures I drew, based on an old print.

Catesby gathered the conspirators at the Duck and Drake inn near St. Clements Church in the Strand, on 20th May 1604.
The group include Thomas Percy, Thomas Wintour, Jack Wright and Guido Fawkes.
They had included Guido because he was an expert in explosives.
Guy(Guido) was from Yorkshire.
He was not at first a Catholic, but had become familiar with the religion through his stepfather.
As a young man he convertred, and fought on the Spanish side in the wars in Holland and Belgium.
It was then that he became skilled in the handling of gunpowder and also assumed the Spanish version of his name, Guido. 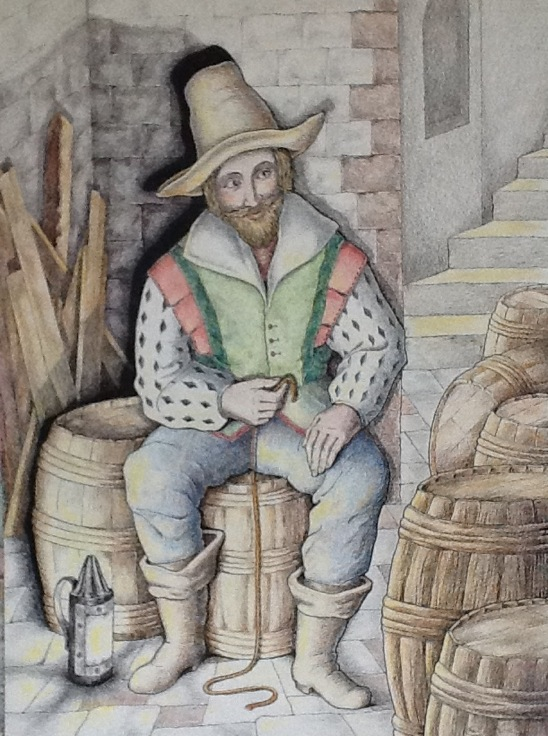 The plotters bought quantities of gunpowder, which they stored across the river from Westminster.
The Parliament buildings were set among a sprawl of smaller houses, on the site of the present Victorian Houses of Parliament.
In late 1604 they attempted to dig a hole in the foundations of Parliament by hiring a building to the side of the House of Lords.
This proved too difficult, but a cellar directlyunderneath Parliament became available.
36 barrels of gunpowder were carried across the river and hidden in the cellar under iron bars, stones and faggots.
However, the opening of Parliament was delayed due to an outbreak of plague.
Guy was in charge of the barrels.
To light the black powder he would have used a slow-match, a treated fuse.
The lantern in the picture is a copy of the actual LANTHORN (so called because it had a horn, rather than a glass panel) which is now in the Ashmolean Museum's collection. 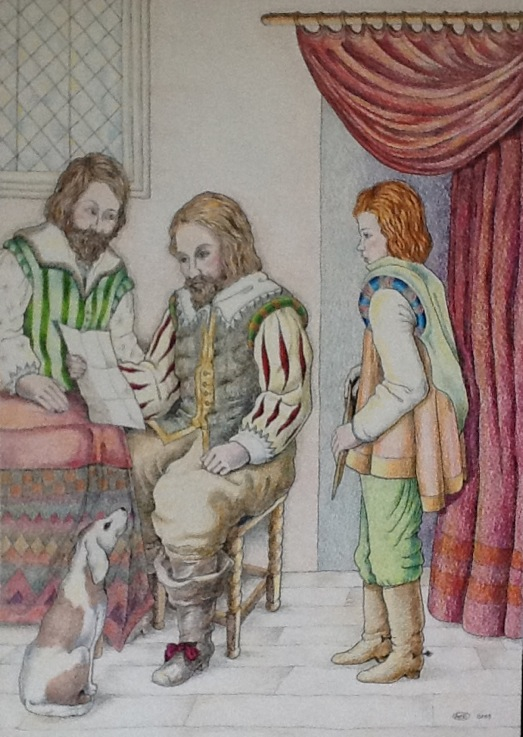 On 26th October, 1605, Lord Monteagle, at home in his house at Hoxton, in the northern suburbs of London, received an anonymous letter warning him not to go to the opening of Parliament.
Monteagle had been a loyal Catholic, but he wanted to keep in with the new regime and so he showed the letter to Robert Cecil, who was the Secretary of State.
This is what the letter said:
"My Lord, out of the love I bear to some of our friends, I have a care of your preservation.
Therefore I would advise you, as you render your life, to devise some excuse to shift of your attendance at this Parliament; for God and man hath concurred to punish the wickedness of this time.
And think not slightly of this advertisement, but retire yourself into your country where you may expect the event in safety.
For though there be no appearance of any stir, yet I say they shall not see who hurts them.
This counsel is not to be condemned because it may do you good and can do you no harm; for the danger is passed as soon as you have burnt the letter.
And I hope God will give you the grace to make good use of it, to whose body protection I commend you."

There are a number of theories as to who wrote the letter; Antonia Fraser in her book 'The Gunpowder Plot' suggests Monteagle himself.
He had been imprisoned in the Tower in 1601 as part of the Essex rebellion, which had also involved Catesby, and had made attempts to prove his loyalty; he certainly did benefit from the kudos and financial reward which followed. 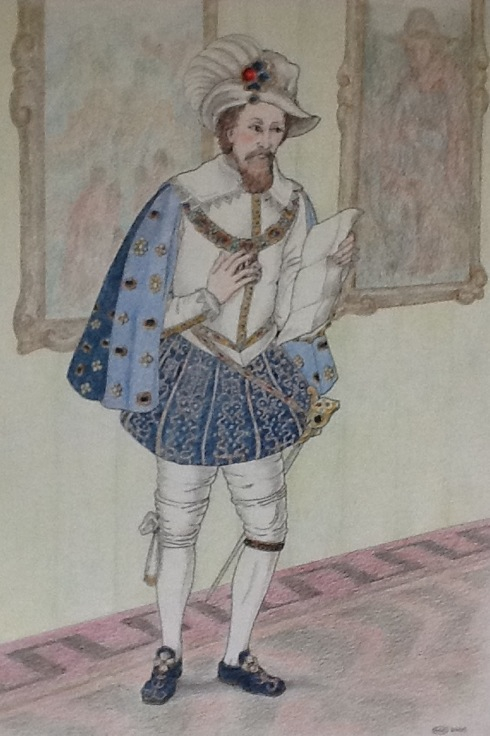 On Friday, November 1st Cecil took the letter to the King.
James was alone in his Gallery in Whitehall when he was handed the letter.
In his own account we can read how he analysed the message and surmised that there was a danger due from powder and explosion.
The very next day the Privy Council came to the King and told him that it had been agreed that the Houses of Parliament should be searched 'both above and below.'
This would not be until Monday, 4th November; this was partly to prevent the spread of rumours, and partly as it would be best to make the search 'the nearer that things were to readiness.' 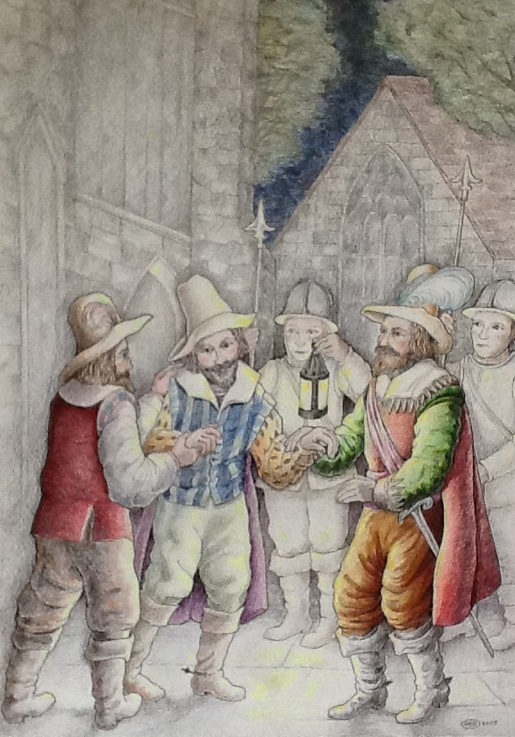 Two searches were made.
During the first search they did discover a tall man near the cellar, and found firewood, but not wanting to arouse suspicion they left.
A second search party, returning at midnight on 4th November, discovered a man in a cloak and dark hat, booted and spurred as though for flight.
He gave his name as John Johnston, servant to Thomas Percy.
He was arrested and taken for questioning.

END OF PART ONE