I never set out to collect bottles, yet I have acquired quite a number.
In this article I shall introduce bottle-digging and show you some of my favourite bottles and containers, but first a little of the history of glassmaking, which in fact goes far back to the ancient Egyptians, who used coiling and core moulding techniques which produced thick, crude containers.

The earliest Egyptian methods of glassmaking were quite crude:

COILED
In the coiled technique a rope of semi-molten glass was wrapped round a clay core(it must have looked a bit like a walnut whip.) then it was reheated, and rolled on a stone slab to smooth it.
When the whole thing was cool the clay core was chipped out.

CORE MOULDED
In this method, a clay model was dunked into molten glass and allowed to cool.
Then it was dipped again, and the process was repeated until there was sufficient thickness of glass to allow the clay to be chipped away.
The Romans went much further, producing free-blown phials and decanters and even using clay moulds.
Over the years some of the glass acquires a beautiful rainbow-coloured patina. 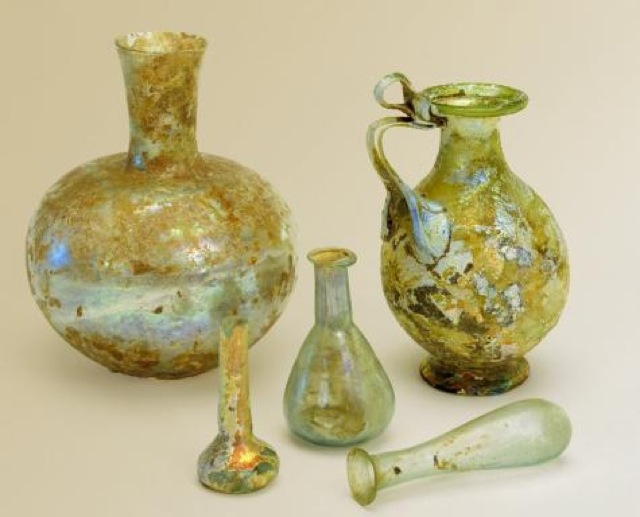 The earliest containers here were made from gourds, shells and animal skins, and in Britain it was not until the sixteenth century, when there was an influx of refugees from the Netherlands, that glassmaking was established.
This seems strange, since although the Romans used glass imported from the continent they slso made glass containers, the technology was known in Syria as far back as 1500 BC., and all the materials needed were readily available here.

The first English glassmakers settled in the South, on the edges of the great forests, where they had free access to wood ( for potash and fuel ), sand and lime.
To make glass, a mixture of potash, sand and lime was heated in a crucible to a considerable temperature : small broken pieces of glass or ' cullet ' were later added, to speed up the process.
A chemical reaction transformed the mixture into molten glass.
The glass maker would allow this to cool and then scoop up a measure with his blow iron.
By blowing down the tube he produced a bladder or ' gob ' of glass, and usually achieved the shape he wanted by spinning the rod between his fingers or swinging it from side to side.
The bottle was allowed to cool, and then sheared off the end of the blow iron and put on a shelf in the furnace to anneal ( temper and toughen.)
This old glass was crude, but was very strong; the sheared lips of the narrow neck made them unsatisfactory drinking vessels.

By 1650 this snag was solved.
Before the bottle was broken off, an apprentice would put his iron ' pontil rod ' into the crucible and extract a blob of molten glass, with which he would weld the rod to the bottom of the bottle. 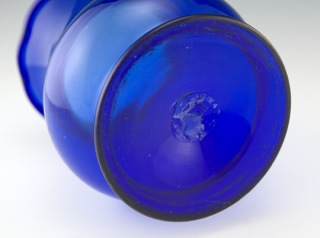 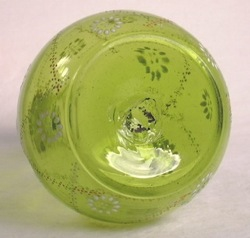 These are pontil marks, left by a pontil rod.

When the Master glassworker sheared off his blow iron, this left the bottle attached to the pontil rod.
He would take the rod and bottle, and push the sheared-off neck end into the furnace until the glass was malleable.
Then he would roll the lip over a flat stone until it was smooth.
The bottle was snapped off the pontil rod and left to anneal.
The base of the bottle was now uneven.
Later the pontil mark was ground smooth.
Here is a modern glassmaker using a pontil rod. 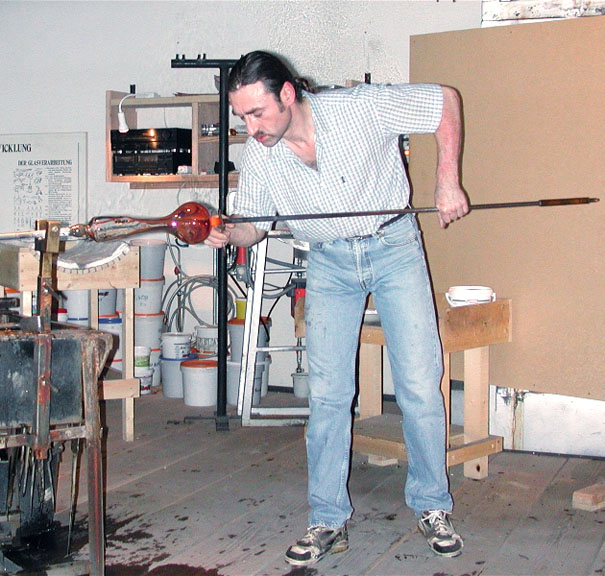 By the 1700s Bristol had developed as the country's main area for glass production; it had nine glassworks, six of which were involved in bottle-making, including wine-bottles. 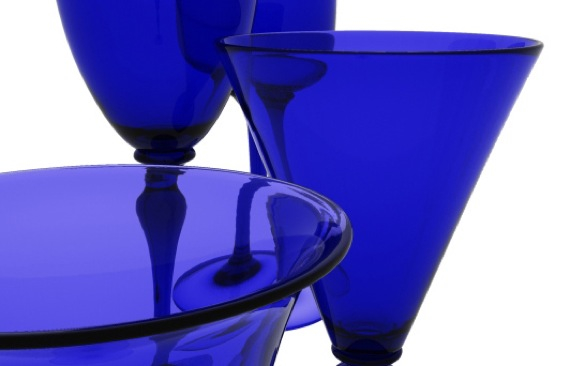 It was at the time of the Industrial Revolution that there came a boom in bottle-making.
With the great movement of population from the countryside to the growing manufacturing centres there was a need to improve food distribution.
At the beginning of the century, grocers ordered staples like flour and sugar in bulk and measured them into bags for their customers; now there was a gradual change to packaging in portions, and to provide a pound of jam or a pint of vinegar glass or stoneware bottles were essential.

By the 1870s the two-piece bottle making mould was in general use and mass production was in full flow.
Hundreds of thousands of bottles were made annually for jam, pickles, sauces, mineral waters, poisons, medicines, inks etc. 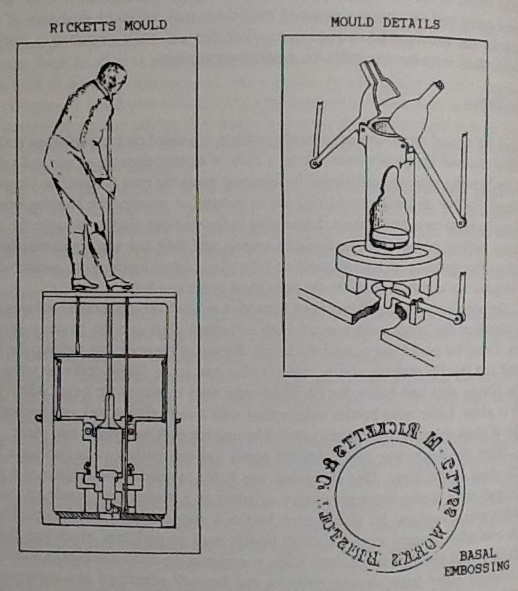 The first patent covering a mould for bottle-making was taken out by Joseph Ricketts in 1821; although moulds had been in use long before that, most collectors agree that the Ricketts mould was the first to come into general use.

The operation of blowing bottles into moulds required a great deal of experience, not to mention a strong pair of lungs to blow bottles continuously for 16 hours a day!
Children from the age of eight worked the same hours as craftsmen until 1830, when the age was raised to 12. 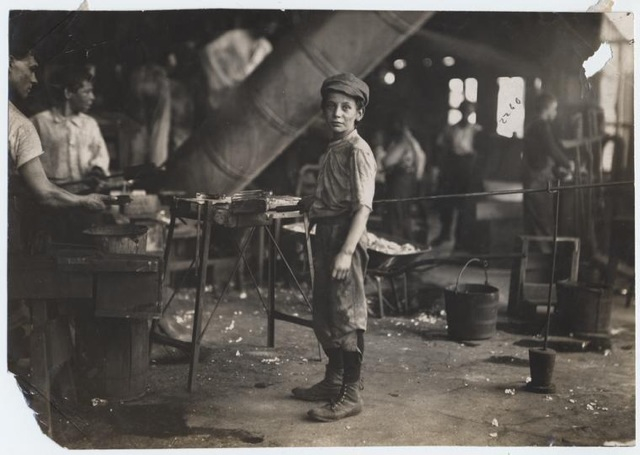 The older bottles have many flaws (which is why I like them ); there are inclusions, bits of grit for example, air bubbles, odd lumps and bumps, offset necks, and spare bits of glass stuck to the sides.
Very old glass can be dark, almost black, because of iron oxide.
For blue the glassworker used Copper Oxide, for green borate of lime.
Odol mouthwash bottles, which had a distinctive shape, were made in 'milkglass.' 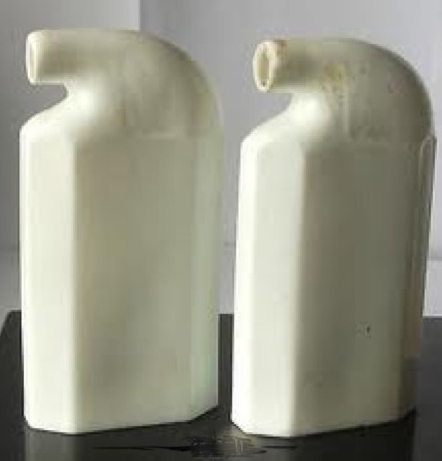 Bottle-collecting is quite a popular hobby, and of course the bottles are "free," found in Victorian dumps which are under fields all over the country. 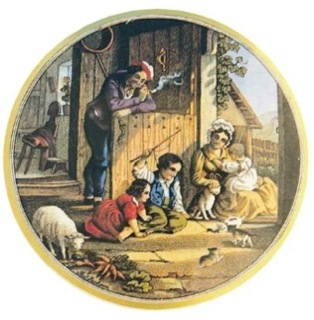 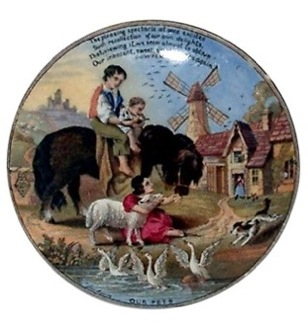 There is a wide variety of treasure to be found; stoneware and glass, meat-paste and caviare pots ( some pot-lids have beautiful coloured lids ), beer and mineral-water bottles, babies' feeding bottles, old wide-mouthed milk-bottles, Virol jars, ink-pots and poison- bottles, coloured blue or green. 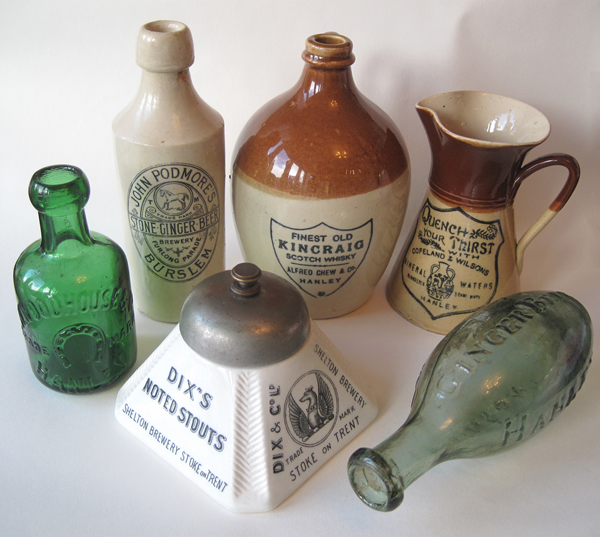 Most of my collection was given to me by friends, relations or schoolchildren, often by boys whose Dads were collectors.

I have a wonderful early Coke can, given to me by a boy years ago.
I have never seen anything like it. Such a strange colour. 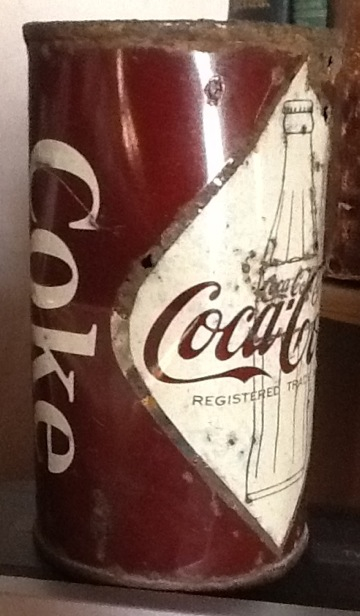 My poison-bottles were either Christmas presents or bought at Covent Garden, where on Thursdays there used to be an Antiques day.
I have both green and blue poison bottles.
I used to take one of each to the Ragged School Museum with me, and ask for volunteers to tell the class what they had once contained. 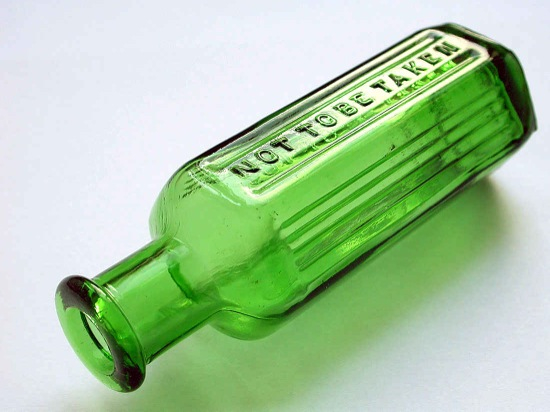 History is so much more interesting when students become detectives. 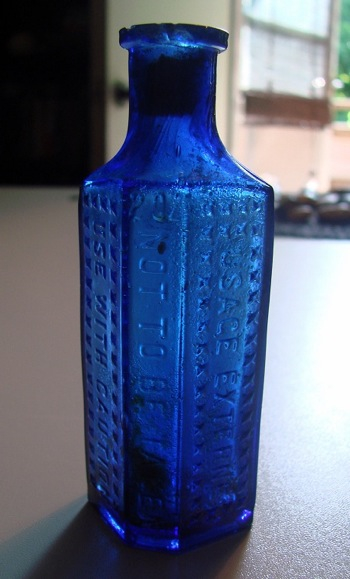 My Codd's bottle, one of my favourites, has such an interesting story.
There is doubt cast on some of the story about this bottle's name, but I happen to think it is all true.
See what you think.

This is a Codd's bottle.

The Codd, or Codds-bottle, was invented by a man called Hiram Codd.
I know that is true, because I went to the Kew Records Office and looked for his name in the 1881 Census.
This is what my printout tells you about Hiram and his family.


In 1872, Hiram invented a bottle, much loved by collectors, which was designed to keep the fizz in carbonated drinks.
The Codd-neck bottle was manufactured to enclose a marble and a rubber washer/gasket in the neck.
The bottles were filled upside down, and pressure of the gas in the bottle forced the marble against the washer, sealing in the carbonation.
The bottle was pinched into a special shape, as can be seen in the photo, to provide a chamber into which the marble was pushed to open the bottle.
This prevented the marble from blocking the neck as the drink was poured. 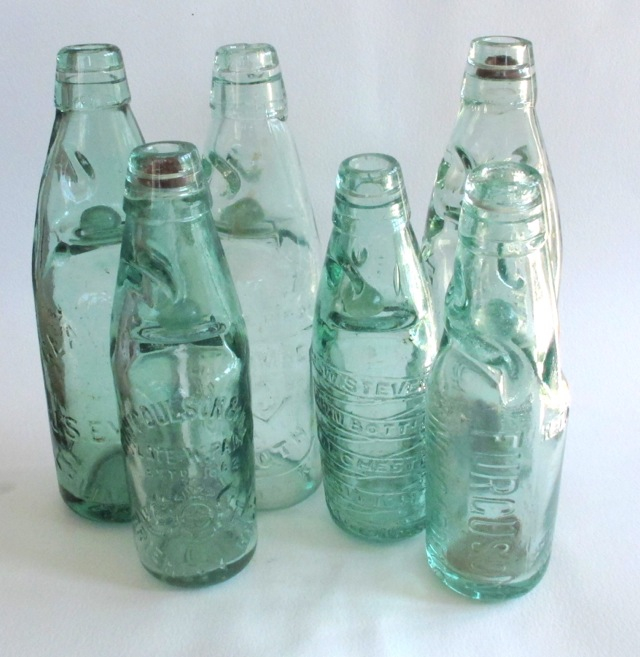 Not many of these bottles are found in bottle-digging sites, because Victorian children got there first, and smashed off the neck in order to obtain the precious marble.

Soon after its introduction, the bottle became extremely popular with the soft drink and brewing industries, mainly in Europe, Asia and Australasia, though some alcohol drinkers disdained the use of the bottle.

It is said by some that Hiram's bottle was responsible for one of our strange English slang expressions.
But there is a lot of disagreement about the origin of the word "codswallop", which you may never even have heard.
As a child I often heard it.
My Father used to say that I talked "codswallop", and he meant I was talking rubbish.

How could "codswallop" be connected wth a ginger-beer bottle?
The explanation goes like this:
The Codd bottle was used for cheap fizzy drinks, and particularly carbonated water and ginger beer.
"Wallop" was already a word associated with rough beer, something of poor quality.
Hence, "codswallop" meant "rubbish."

At one time this was accepted as the correct etymology, but more recently it has been questioned.
However, no other explanation has been offered, and the original suggestion seems very plausible to me.


If you feel you would like to try digging for bottles, remember you must ask permission from the landowner before digging. It would probably be best to look for a local group to join. 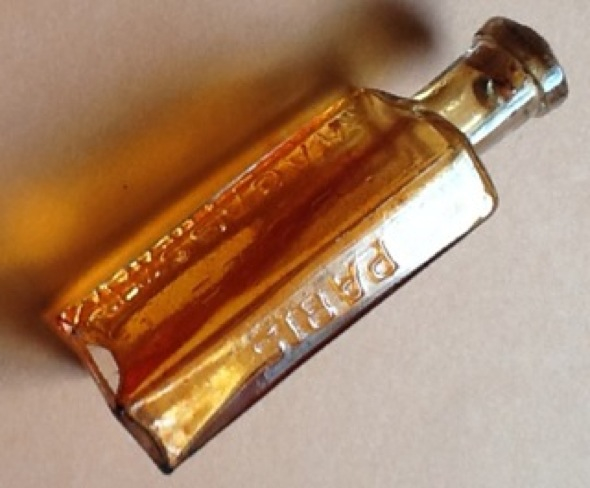 My last bottle is neat and small: it came from a fleamarket in France, and cost only 2 euros.
It has "Huile Macassar," "Paris," and "Pour les Cheveux" embossed on the golden glass, and it is from that hair-oil that in the past English chairbacks, or "antimacassars" got their name; they were used to protect the furniture from greasy male heads! 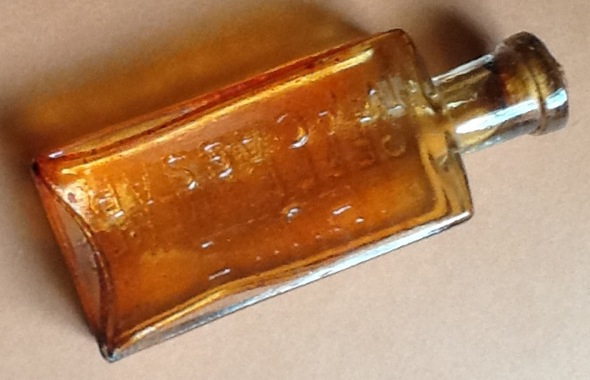 You will remember our adventures at Barking Creek! And the Macassar bottle, of coursexxxxx
Refresh comments list