The Primary School playground is as important a part of your children's education as the classroom.
It is in the playground that the children learn to find a place in society.
They are temporarily left defenceless, on their own, among their peers, away from the advice and interference of parents, largely free from the direction of teachers, and able to choose for themselves how to use their time. 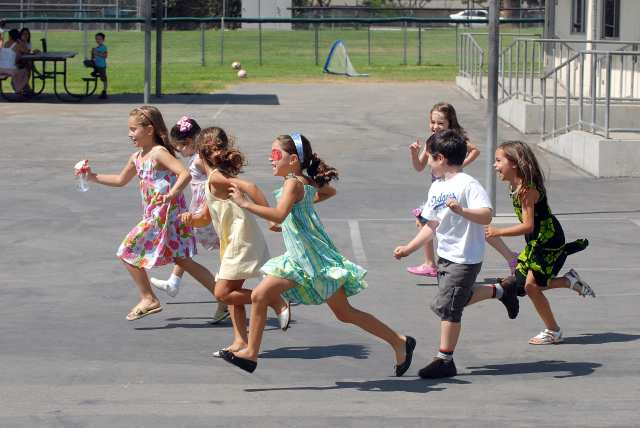 In the playground they become whole people (let's face it, many of the adults around them do not usually treat them as entirely responsible human beings ) and they prove themselves fully able to organise quite complicated group activities, each with rules and appropriate language.
They are so inventive and productive!
A brief study of the traditional literature and play procedures in any playground will provide ample evidence of the creative ability of young children when they are given the time and opportunity to work (or "play") together.
The playground is not a 'soft' place, and children are much more independent by the end of their first year at school. 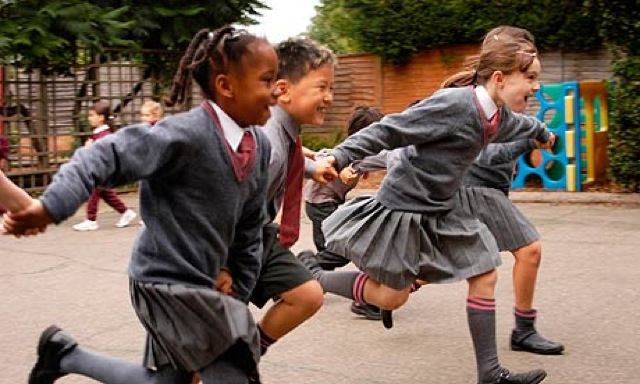 Many people have studied and collected the rhymes and rules and variations of playground games, most of which have been passed down through generations of children, adapting to changing social conditions but retaining basic structure.
I was in a Dagenham Primary school a few years ago and the children were asking me about my life.
They asked me what games I had played, and I told them about two-balls, bouncing two balls against a wall and doing actions to a chanted rhyme, and about long-rope skipping. 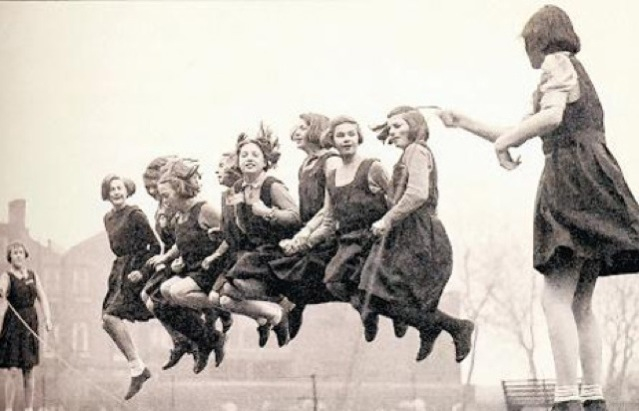 I began to 'sing' one of the skipping-rhymes which was in fashion in my primary school in Sussex over 70 years before: it was
"I am a girl guide dressed in blue,
These are the things that I can do:
Bow to the King, salute to the queen....."
and to my amazement the whole class joined in with me!
The rhyme had survived a journey in space and time. 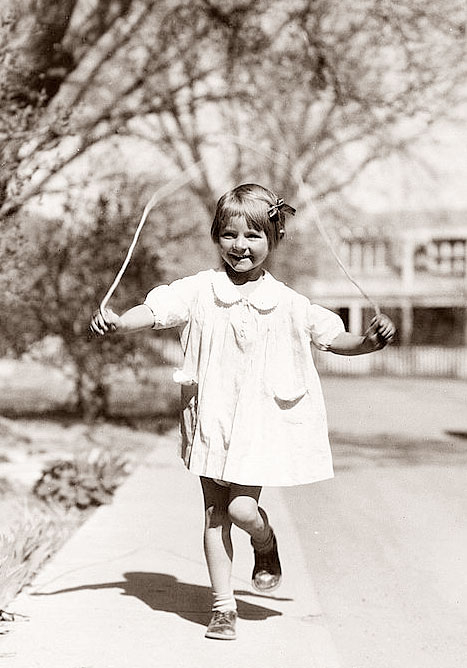 With slight local differences, these traditional games seem to survive intact; they are universally known to today's far more multi-cultural primary school intake.
The rules of these games are strictly kept; i should hate to be in court faced with a nine-year old judge.
Children are happy with black-and-white judgements, perhaps because clear decisions add security to their understanding of the world.
Woe betide anyone who attempts to bend the rules! 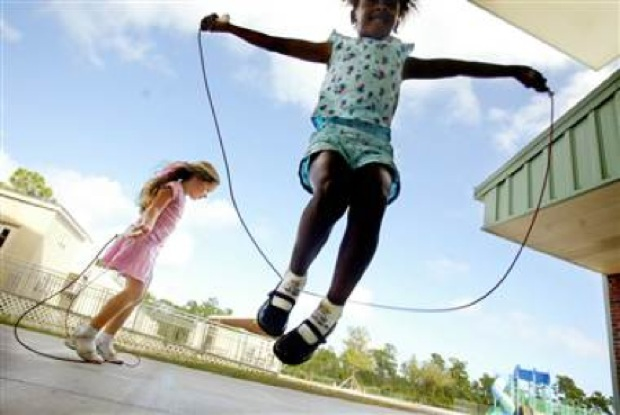 What follows is a collection of skipping, ball and group games which are still played today, and which I recognise from my own childhood, more than 75 years ago....
For me, the best of this article is evident in the faces of the children; released and happy, living in the moment, they give me a real sense of their joy.
Interestingly, it was always the girls who played skipping, twoballs and clapping games: the boys were involved in conkers, marbles, fivestones and less specific group ball-games or "Release." 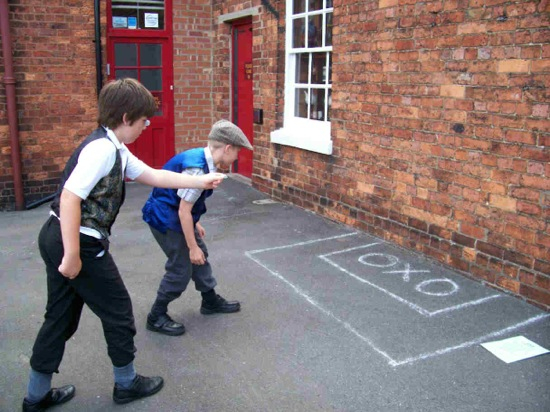 PLAYGROUND RHYMES TWO BALL (or juggling) RHYMES
This was played everywhere, against every spare wall, when I was a child.
It is sadly no longer part of playground tradition, although there are mothers who try to pass it on to their children.
We had two balls, usually tennis balls, and bounced them up against windowless walls, chanting a rhyme and performing a number of actions while the balls were in the air. 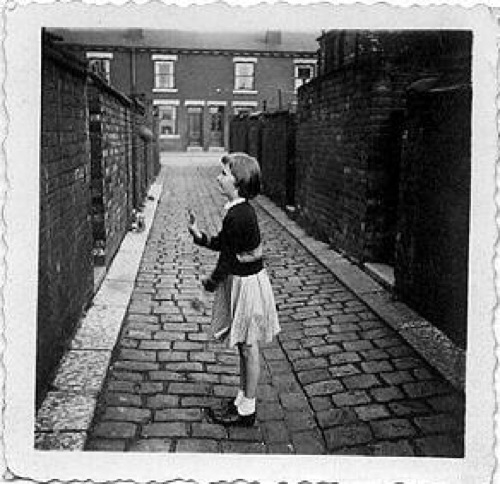 I asked my mother for fifty cents
To see the elephant jump the fence;
He jumped so HIGH
He reached the SKY
And never came down 'till the 4th of July.

One two three and PLAINSY
Four five six and PLAINSY
Seven eight nine and PLAINSY
Ten and PLAINSY, catch the ball.
(Followed by the same, substituting
UPSY, OVER, DROPSY, and WHAMSY) with actions to match.

Each, peach, pear, plum
I spy Tom Thumb;
Tom Thumb in the wood
I spy Robin Hood;
Robin Hood in the cell
I spy William Tell;
William Tell at the table
I spy Betty Grable;
Betty Grable is a star
S — T — A — R.
The film star names changed with the times...

Please miss, my mother miss,
Came to tell you this miss,
I miss won't miss,
Be at school tomorrow miss.

One, two, three O'Lairy,
My ball's down the airy.
Don't forget to give it to Mary,
Not to Charlie Chaplin. 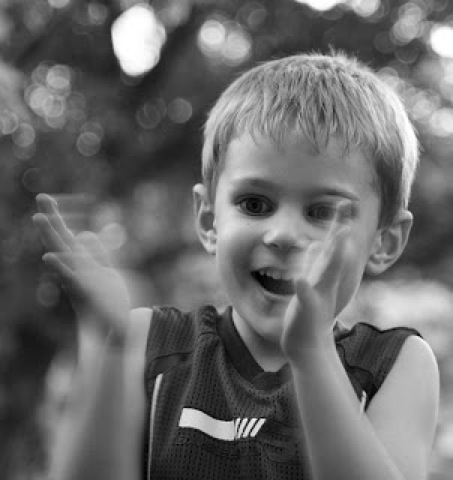 There are very many clapping rhymes, but usually between 'girl best friends.'
They stand facing each other about a foot apart and say the rhyme whilst doing the actions.
Clap = Clap your hands
Right = Clap partner's right hand
Left = Clap partner's left hand
Knees = Slap your knees
Together = Clap your partner's hands