This is the Second Part of the storyboard I made for the Tower of London Education Department in 2005, to commemorate the 400th Anniversary of the Gunpowder Plot.
The first part ended with the arrest, at midnight on November 4th, of a man who said he was John Johnston, servant to Thomas Percy.
Look back if you missed it...

All the images are in coloured pencil and ink, on A3 paper, and were used as part of a lesson in the Tower. 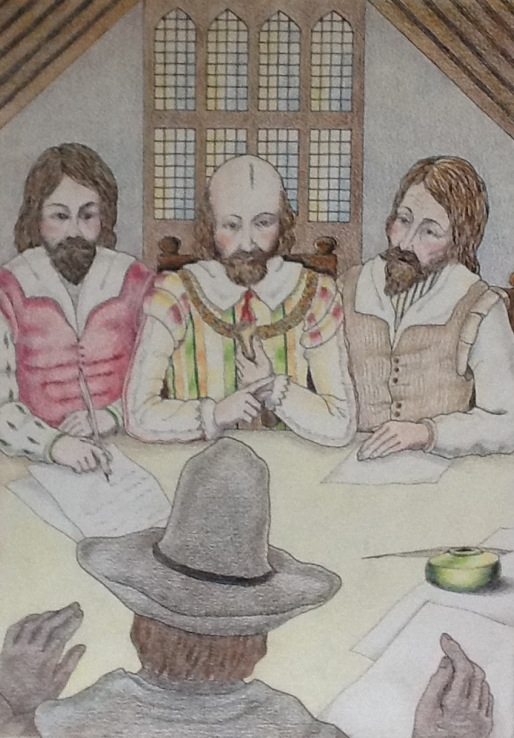 For a long time Guy was questioned by members of the Privy Council, but continued to keep up the fiction that he he was John Johnston.
However, he freely admitted that he had intended to blow up King James, the government and the Lords.
He said that his one regret was that he had failed.
"The devil, not God, discovered the plot," he said.
In view of the pain he was facing, one cannot help admiring his bravery.

Image 9: Guy brought to the Tower 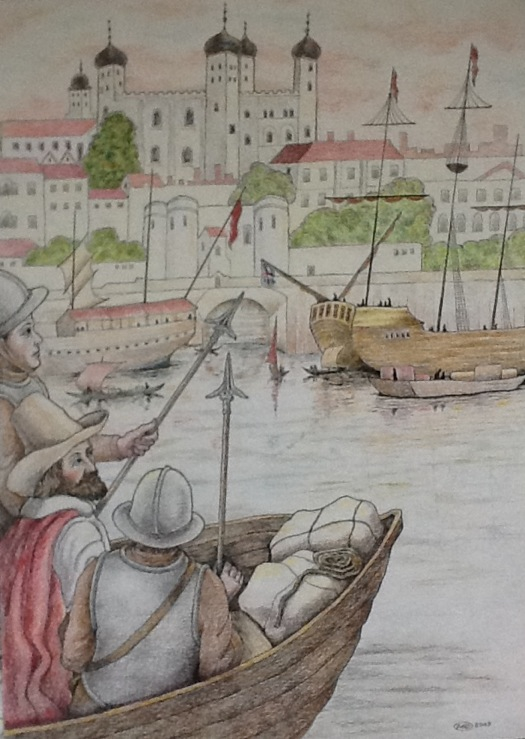 The King made the decision to torture Guy on November 6th.
Guy was transferred by boat to the Tower.
The document signed by King James stated that, for such a "desperate fellow" as John Johnston , if he would not confess, "the gentler Tortures are to be first used unto him 'et sie per gradis ad ima tenditur' (and so by degrees proceeding to the worst.)

The gentler tortures were the manacles and the worst the rack.
James drew up a long list of questions for interrogation.

Image 10: Torture at the Tower 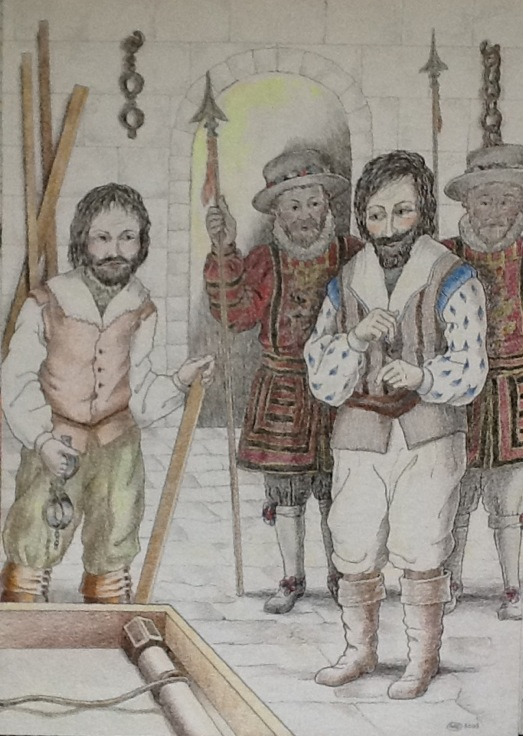 It is unsure whether or not the rack was required.
Certainly the manacles were used, to powerful effect.
Father Gerard echoed popular opinion that Guy was racked, and priests subsequently held in the Tower were certainly told he had been. 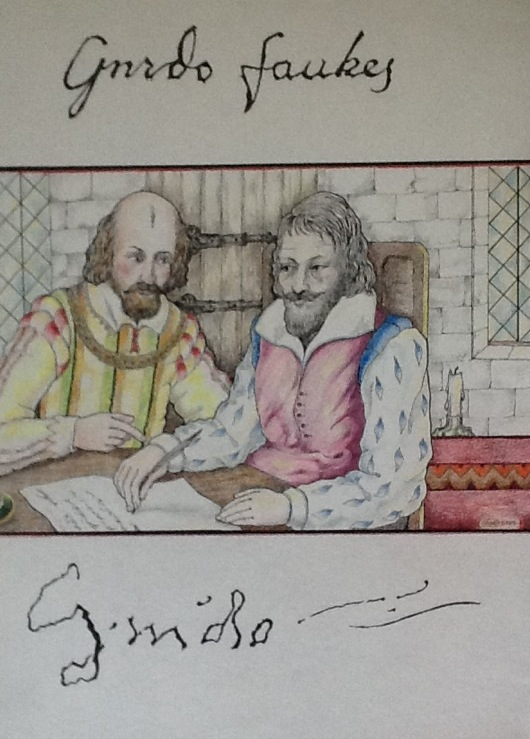 On 7th November the torture succeeded, and as one observer said, "Since Johnston's being in the Tower, he beginneth to speak English."
He confessed his real name,and by the 3rd confession on 9th November he had named some of the other conspirators.
The signatures are from documents stored in the National Archives at Kew.
The 'before and after' signatures show the cruel effect of the manacles.

Image 12: Plotters imprisoned in the Tower 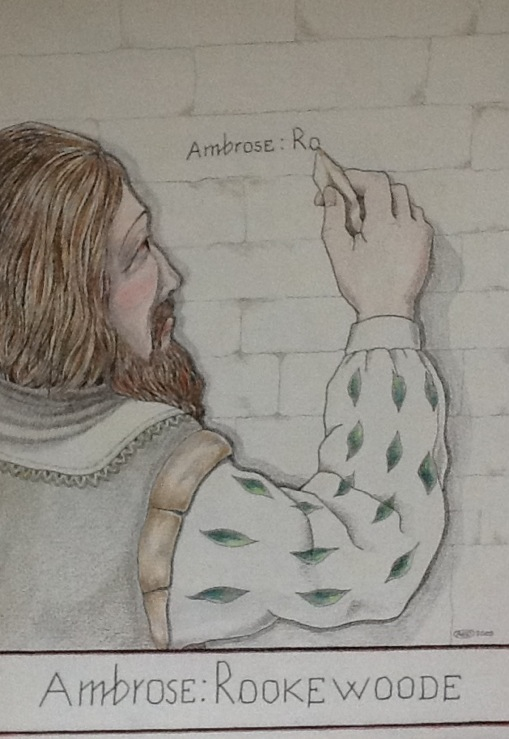 Evidence that other plotters were imprisoned in the Tower are the actual inscriptions on the walls.
Ambrose Rookwood's carving can be seen in the Martin Tower, and Digby's in Broad Arrow Tower.
Plotters were arrested in the Midlands and throughout the country.
The trial began on 27th January,1606 at Westminster Hall.
Seven of the eight accused were brought by barge from the Tower of London to Whitehall early in the morning: they were Guy Fawkes, Thomas and Robert Wintour, John Grant, Ambrose Rookwood, Everard Digby and Robert Keyes.
Apart from Digby, all entered a plea of not guilty.
All 8 were found guilty of high treason and sentenced to death.

They were all executed over 2 consecutive days.
They were pulled through the city on hurdles to the place of execution - the western end of St. Paul's churchyard on the first day and Wintour, Rookwood, Keyes and Fawkes at the Old Palace Yard, Westminster. 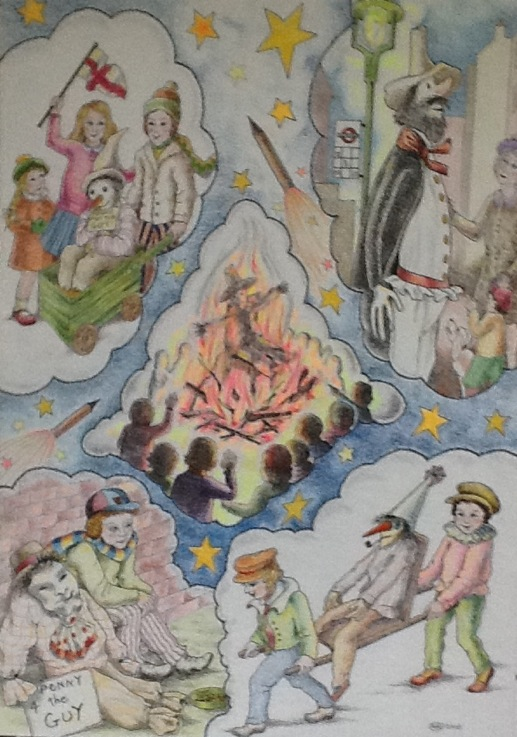