I have a good friend in Peterborough.
When I was able to travel, I would spend time with her every year, and we would visit interesting museums, historical houses, gardens and galleries together.
This article is about a most unusual place in Rutland.

I still cannot explain the origin of the strange custom which has distinguished it over the centuries, but will tell you what I can. 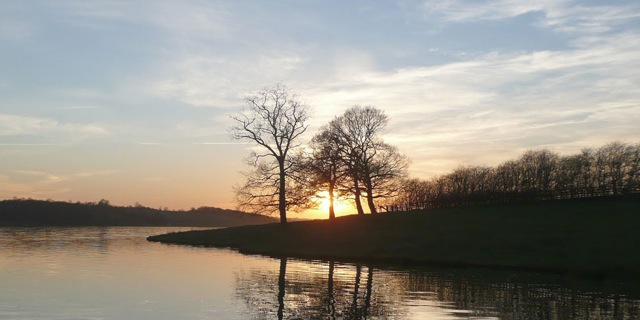 First, a little about Rutland, which is a really small landlocked county.
Its greatest length north to south is only 18 miles, and its greatest breadth east to west is 17 miles; it is the smallest historic English county, which is no doubt why the county council adopted the Latin motto "Multum in Parvo" or " Much in Little" in 1950.
The only towns in Rutland are Oakham, the county town, and Uppingham.
At the centre of the county is the large artificial reservoir, Rutland Water, with a similar surface area to Windermere.
It is an important and beautiful nature reserve serving as an overwintering site for wildfowl and a breeding site for ospreys; don't miss it if you are ever in the county. 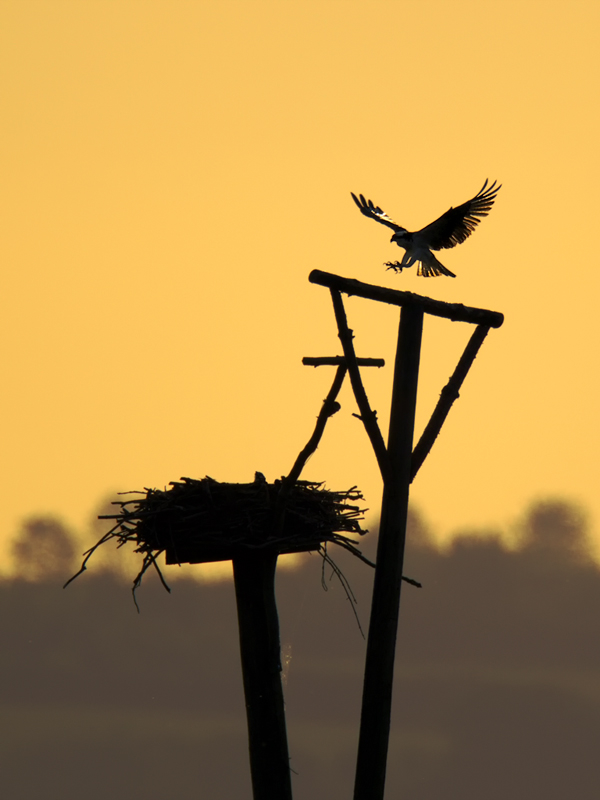 When we arrived in Oakham, we went immediately to Oakham Castle, which is not really a castle at all; it is all that remains of a fortified Manor House from the mediaeval period.
It was built between 1180 and 1190, when Henry the Second was on the throne, for Walchelin de Ferriers, Lord of the Manor of Oakham.
The building is recognised as one of the best examples of domestic Norman architecture in England.
Entry is free; Oakham Castle is owned and managed by Rutland County Council, and is licensed for civil ceremonies.
Not surprisingly, it is a popular venue for weddings. 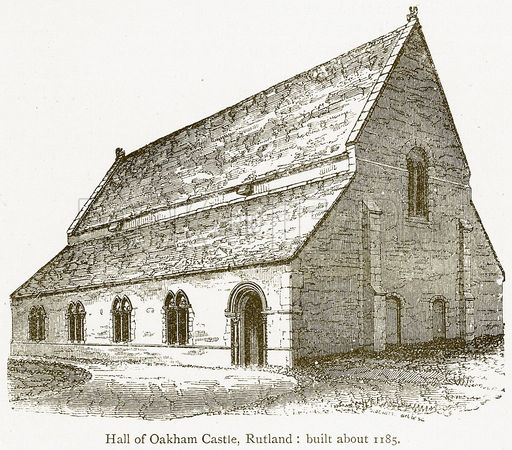 The Great Hall of Oakham Castle has a nave and two arcaded aisles, each with three large stone columns; there are a number of 12th century sculptures, including six musicians supported by the columns.
They were carved from local stone, and are believed to have been the work of masons who were also at Canterbury Cathedral.
Originally, the Manor House had several of the traditional features of a castle, including a gatehouse and a drawbridge with iron chains.
Historical and archaeological evidence suggests that the Castle possessed towers strategically placed along its walls, and even a moat. 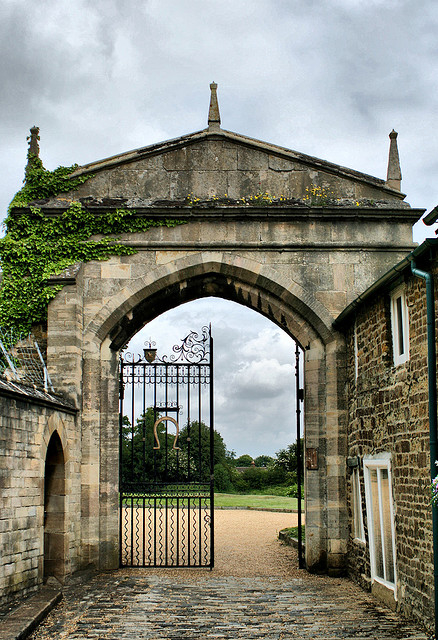 A horse shoe hangs on the entrance gate.

Now we come to our reason for visiting this unusual building.
There is evidence of a unique tradition that, for hundreds of years, peers of the realm were expected to forfeit a horseshoe to the Lord of the Manor of Oakham on their first visit to the town.
It is thought that this tradition is linked to the ‘de Ferrers’ family name.

Ferrier was the Norman French word for farrier and the horseshoe has been a symbol of the de Ferrers family since Henry de Ferrers arrived in England in 1066; the de Ferrers have used the horseshoe as a symbol on their coat of arms since 1066.
No one knows for certain, but it seems likely that the Ferrers demanded that visitors present a horsehoe as a form of tribute (or, perhaps, visitors thought it prudent to do so, to curry favour with the Lord of the Manor.) 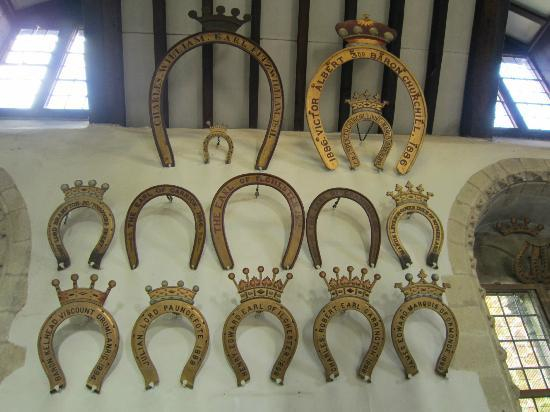 The earliest documentary reference to the custom can be found in a survey of the Manor of Oakham, made on behalf of Henry VIII after the execution of Edward, Duke of Buckingham for treason in 1521.
Here it is written:
"There oweth no nobleman to pass through the said lordship [ of Oakham ] but if he do homage to the castle there in giving an horse shoe, insomuch that many horse shoes be set upon the hall door, some marvelous great and some little, with arms and cognizances; and in the midst of the over end of the hall is an horse shoe with the arms of England, being nigh in breadth a yard, which was commanded thither by King Edward the 4th." 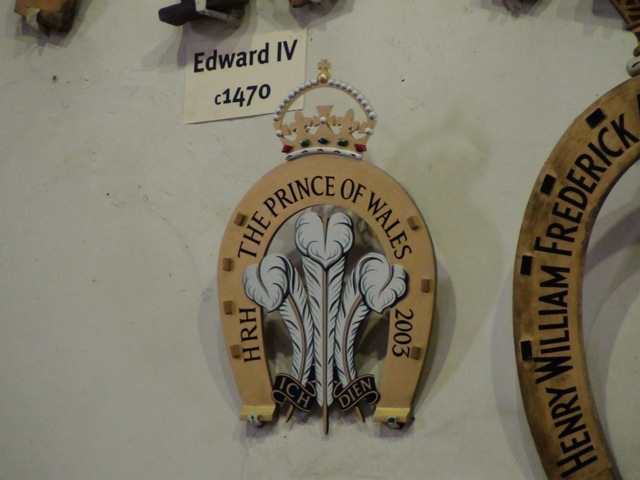 Two hundred and thirty horseshoes are hung upon the walls of the castle great hall; in fact, there are so many that they take up almost all the available space on the walls.
Here is Prince Charles's Horse shoe.


They were originally nailed to the great wooden doors which hung where the stone gateway now stands.
Unfortunately, the horseshoes on public display had a habit of "disappearing," and it was thought best to move them inside for safety.
Many of the horseshoes are huge; they were not actual horseshoes, but were intended to reflect the status of the giver.
Some are gilded and painted, and highly ornamental. 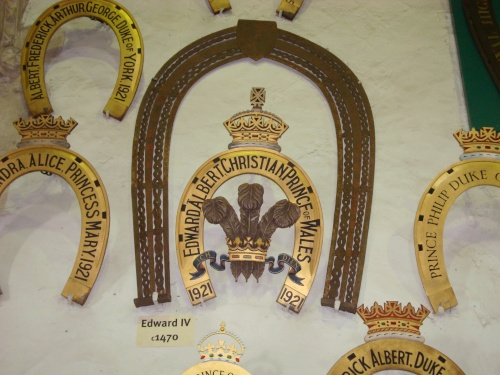 Although it is not actually at all clear how the custom originated, as the earliest horseshoe in the collection was given by Edward 1V, in thanks after his victory at the Battle of Losecoat Field (near Empingham) in 1470, we know that the tradition is centuries old.
The newest is the horseshoe presented by Princess Alexandra in 2005.
It seems plausible that when the custom really began to take hold in the 14th century it was merely the reflection of a tradition that had been in existence for centuries.
It is an absolutely unique manorial privilege, and nothing like it was known in any of the lands and properties owned by the family. 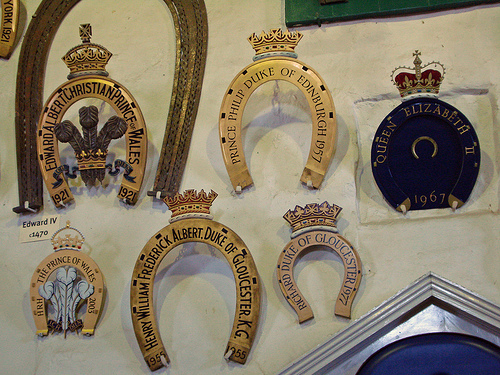 Some horseshoes are decorated with coronets to indicate the rank of the donor.
This custom began in 1784 when the 2nd Earl Spencer donated a shoe with his ducal coronet.
Not all of the coronets are correctly placed; that is, some earls have a duke's coronet, and vice-versa.

The two huge horsehoes donated by the future Queen Victoria and her mother, Alexandra are the only two shoes that are touching.
We know that they were installed that way, and that every other horseshoe was carefully set so that it did not touch any other.
It could be that Princess Victoria's mother was making a point about her importance, and her unwillingness to let go of her authority over the future queen.
In which case, she was not making due allowance for her daughter's fiery spirit! 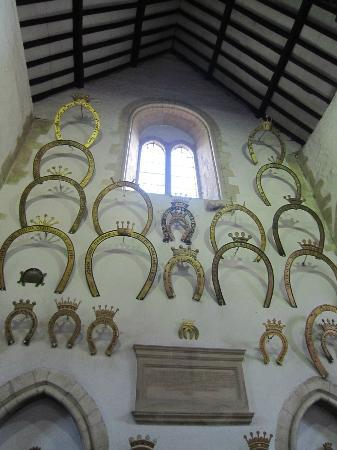 There is a large gap in the years represented by the horseshoes on display.

This is because a great number of them were melted down as scrap metal to help the war effort during WWI.
As a result, there are almost no Elizabethan horsehoes, and a comparatively large number of Georgian and later ones.

Allowing for theft and the WWI salvage, the present display is by no means complete.
But it is such an unusual sight!

Certainly I know of no other horseshoe collection like that at Oakham Castle. The Great Hall is well worth a visit! 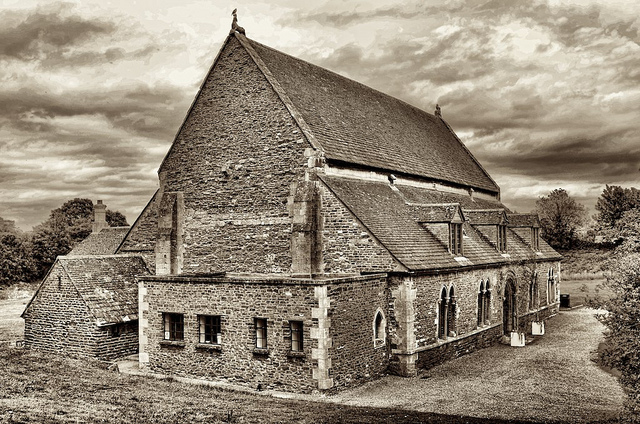