Dylan Marlais Thomas (27 October 1914 – 9 November 1953) was a Welsh poet and writer whose works include the poems, "Do not go gentle into that good night", "And death shall have no dominion", the "Play for Voices," Under Milk Wood, and stories and radio broadcasts such as " A Child's Christmas in Wales." 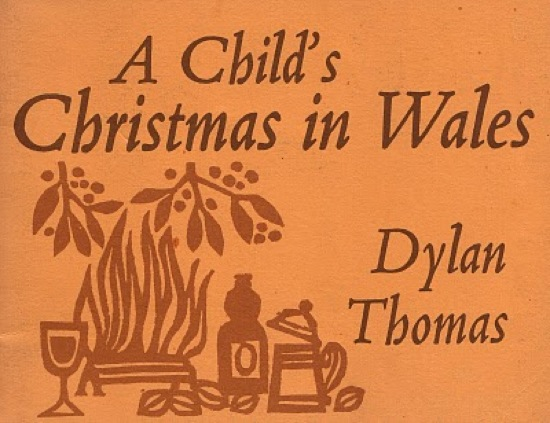 Thomas was born in Swansea, Wales in 1914 to Florence Hannah and David John Thomas in Uplands, Swansea - an "upmarket " area of the town.
He had a sister, Nancy, who was 9 years his senior.
Both the children were brought up to speak English.
Dylan was brought up in Swansea, but spent summer holidays with his aunts at their farm in Carmarthenshire.
Much of his later writing was inspired by the rural contrast to his everyday town life.
He was a sickly child, and often stayed away from school, preferring to read alone.
An undistinguished student, he left school at 16, becoming a journalist for a short time.
Although many of his works appeared in print while a teenager, it was the publication of "Light breaks where no sun shines", published in 1934, that caught the attention of the literary world. 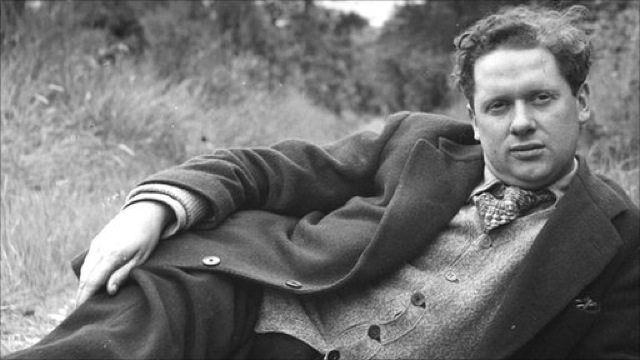 While living in London, Thomas met Caitlin Macnamara, whom he married in 1937.
they were married on 11th July, 1937, and although their relationship was defined by alcoholism and was mutually destructive they went on to have three children - Aeronwy, Llewelyn and Colm.
In the early part of his marriage, Thomas and his family lived hand-to-mouth, settling in the Welsh fishing village of Laugharne. 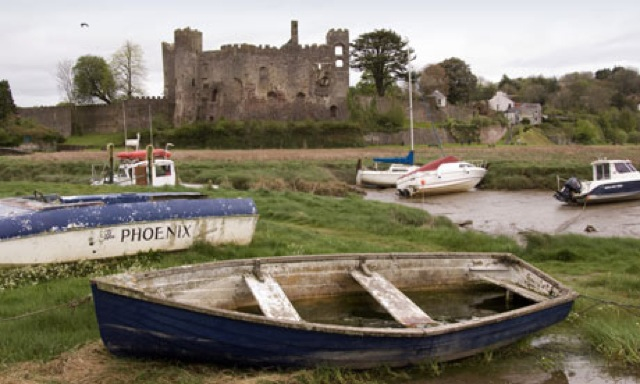 Due to his continued ill-health, Dylan was considered unfit to enlist in the second World War, and instead was conscripted to write scripts for the government.
Although he was appreciated as a popular poet in his lifetime, he found earning a living as a writer difficult, and augmented his income with readings and broadcasts.
His radio recordings for the BBC during the latter half of the 1940s brought him a level of celebrity. 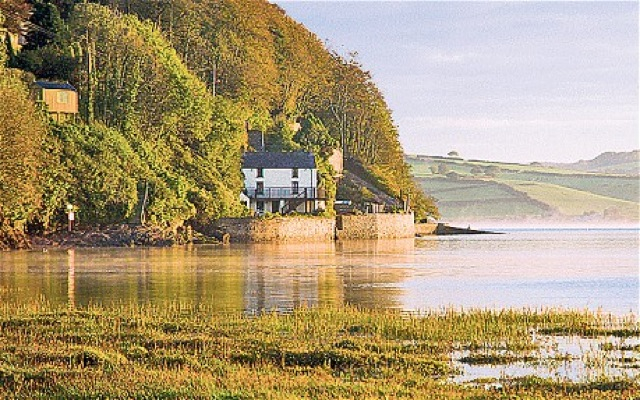 Thomas had spent many happy days in Laugharne, Carmathenshire with his friend and fellow poet, Glyn Jones.
In 1949 the Thomas family moved into the Boathouse in Laugharne.
The location enabled Dylan Thomas to be at one with Wales again and it was here that his most famous work, Under Milk Wood, was written.
The fictitious town of Llareggub (or “bugger all” spelt backwards as nothing ever happened there) was said to be based on Laugharne. 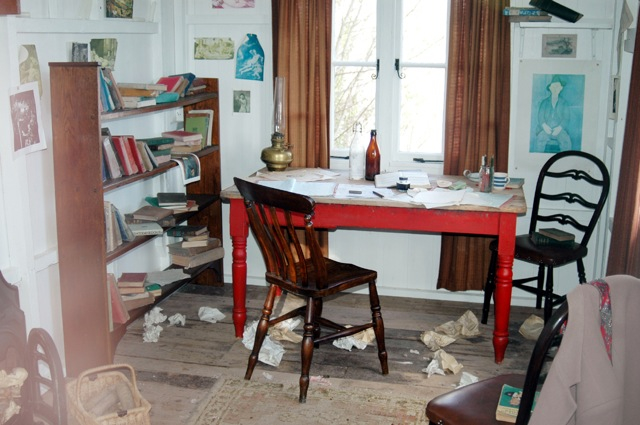 Dylan's study in the boathouse

In the 1950s he travelled to America, where his readings brought him a level of fame, though his erratic behaviour and drinking worsened.
His time in America confirmed his status, especially when he recorded major works such as "A Child's Christmas in Wales" and "Under Milk Wood." 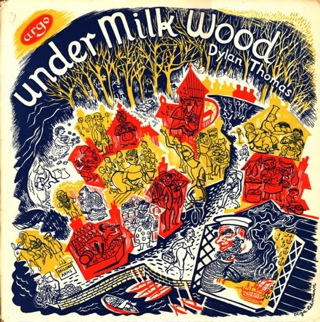 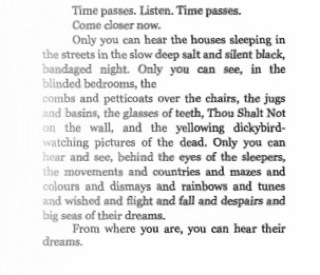 During his fourth trip to New York in 1953 Thomas became gravely ill and fell into a coma from which he did not recover.
He was already ill before he left England, having been suffering from blackouts and heart problems; his condition deteriorated while he was in New York, and sadly he died on 9th November 1953, aged just 39. 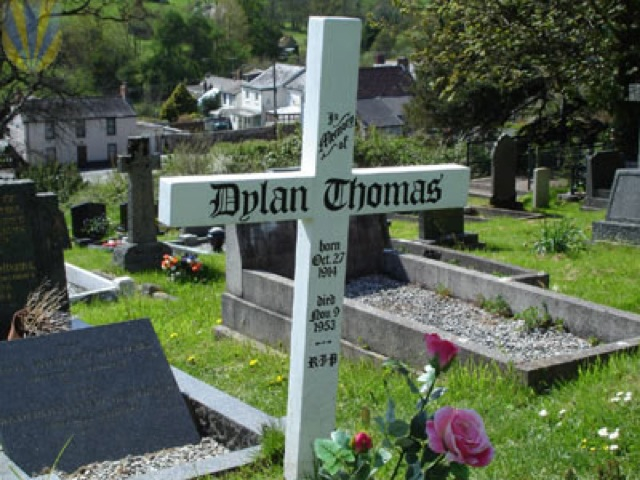 His body was returned to Laugharne and he was buried in the churchyard there.

There is a statue of Thomas in the town of his birth, Swansea. 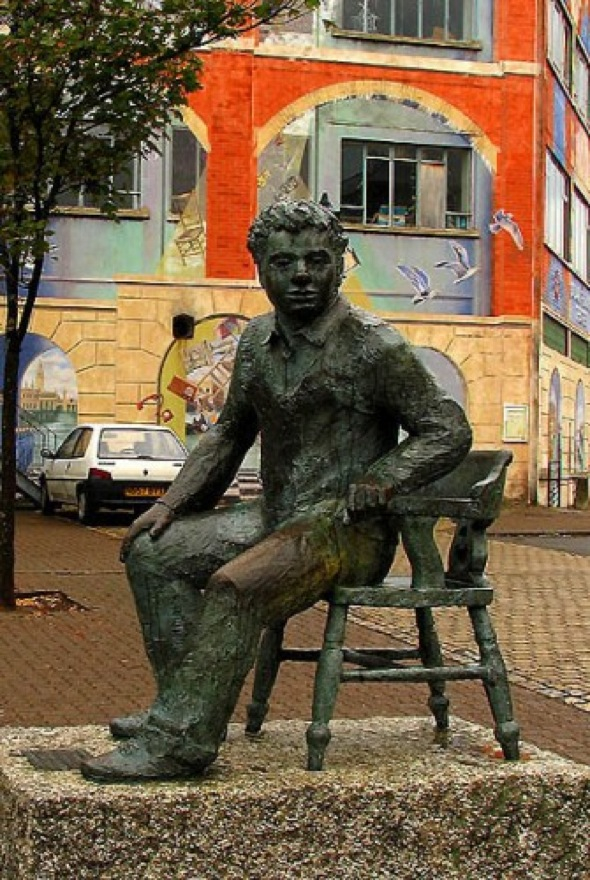 This is the restored hut where Dylan Thomas used to write and where Under Milk Wood was put to paper.
The hut overlooks the estuary of the River Taf.
The Boathouse is now designated as a literary and cultural resource on the life of Thomas and is open to the public for a small fee.

Although writing exclusively in the English language, Thomas has been acknowledged as one of the most important Welsh poets of the 20th century, noted for his original, rhythmic and ingenious use of words and imagery.
It is such a bonus that we can still hear him speaking on the recordings he made.

I have chosen four examples of his work, which are best read out loud.
Try it!

From "A CHILD'S CHRISTMAS IN WALES" 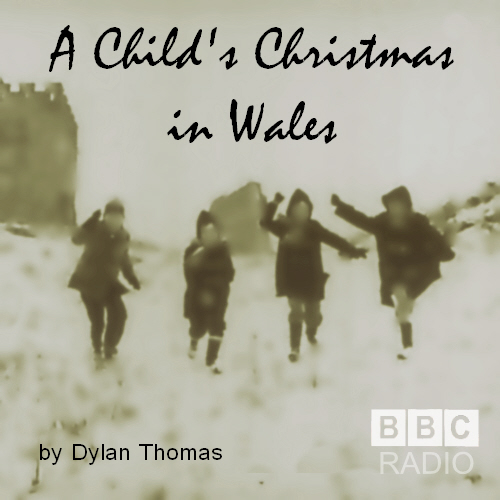 All the Christmases roll down toward the two-tongued sea, like a cold and headlong moon bundling down the sky that was our street; and they stop at the rim of the ice-edged fish-freezing waves, and I plunge my hands in the snow and bring out whatever I can find.
In goes my hand into that wool-white bell-tongued ball of holidays resting at the rim of the carol-singing sea, and out come Mrs. Prothero and the firemen.

It was on the afternoon of the Christmas Eve, and I was in Mrs. Prothero's garden, waiting for cats, with her son Jim.
It was snowing.
It was always snowing at Christmas.
December, in my memory, is white as Lapland, though there were no reindeers.
But there were cats.
Patient, cold and callous, our hands wrapped in socks, we waited to snowball the cats.
Sleek and long as jaguars and horrible-whiskered, spitting and snarling, they would slink and sidle over the white back-garden walls, and the lynx-eyed hunters, Jim and I, fur-capped and moccasined trappers from Hudson Bay, off Mumbles Road, would hurl our deadly snowballs at the green of their eyes.
The wise cats never appeared.

We were so still, Eskimo-footed arctic marksmen in the muffling silence of the eternal snows - eternal, ever since Wednesday - that we never heard Mrs. Prothero's first cry from her igloo at the bottom of the garden.
Or, if we heard it at all, it was, to us, like the far-off challenge of our enemy and prey,the neighbour's polar cat.
But soon the voice grew louder.
"Fire!" cried Mrs. Prothero, and she beat the dinner-gong.
And we ran down the garden, with the snowballs in our arms, toward the house; and smoke, indeed, was pouring out of the dining-room, and the gong was bombilating, and Mrs. Prothero was announcing ruin like a town crier in Pompeii.
This was better than all the cats in Wales standing on the wall in a row.

We bounded into the house, laden with snowballs, and stopped at the open door of the smoke-filled room.
Something was burning all right; perhaps it was Mr. Prothero, who always slept there after midday dinner with a newspaper over his face.
But he was standing in the middle of the room, saying, "A fine Christmas!" and smacking at the smoke with a slipper.
"Call the fire brigade," cried Mrs. Prothero as she beat the gong.
"They won't be there," said Mr. Prothero, "it's Christmas."
There was no fire to be seen, only clouds of smoke and Mr. Prothero standing in the middle of them, waving his slipper as though he were conducting.
"Do something," he said.
And we threw all our snowballs into the smoke - I think we missed Mr. Prothero - and ran out of the house to the telephone box.

"Let's call the police as well," Jim said.
"And the ambulance."
"And Ernie Jenkins, he likes fires."
But we only called the fire brigade, and soon the fire engine came and three tall men in helmets brought a hose into the house and Mr. Prothero got out just in time before they turned it on.
Nobody could have had a noisier Christmas Eve.
And when the firemen turned off the hose and were standing in the wet, smoky room, Jim's Aunt, Miss. Prothero, came downstairs and peered in at them.
Jim and I waited, very quietly, to hear what she would say to them.
She said the right thing, always.
She looked at the three tall firemen in their shining helmets, standing among the smoke and cinders and dissolving snowballs, and she said, "Would you like anything to read?" 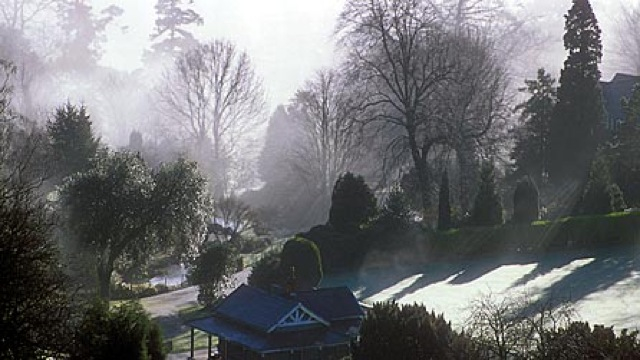 A poem he wrote when his father was dying:

DO NOT GO GENTLE INTO THAT GOOD NIGHT

Do not go gentle into that good night,
Old age should burn and rave at close of day;
Rage, rage against the dying of the light.

Though wise men at their end know dark is right,
Because their words had forked no lightning they
Do not go gentle into that good night.

Good men, the last wave by, crying how bright
Their frail deeds might have danced in a green bay,
Rage, rage against the dying of the light.

Wild men who caught and sang the sun in flight,
And learn, too late, they grieved it on its way,
Do not go gentle into that good night.

Grave men, near death, who see with blinding sight
Blind eyes could blaze like meteors and be gay,
Rage, rage against the dying of the light.

And you, my father, there on the sad height,
Curse, bless, me now with your fierce tears, I pray.
Do not go gentle into that good night.
Rage, rage against the dying of the light.

From QUITE EARLY ONE MORNING

I remember the smell of sea and seaweed, wet flesh, wet hair, wet bathing-dresses, the warm smell as of a rabbity field after rain, the smell of pop and splashed sunshades and toffee, the stable-and-straw smell of hot, tossed, tumbled, dung, and trodden sand, the swill-and-gaslamp smell of Saturday night, though the sun shone strong, from the bellying beer-tents, the smell of the vinegar on shelled cockles, winkle-smell, shrimp-smell, the dripping-oily backstreet winter-smell of chips in newspapers, the smell of ships from the sun-dazed docks round the corner of the sand-hills, the smell of the known and paddled-in sea....

From "UNDER MILK WOOD" 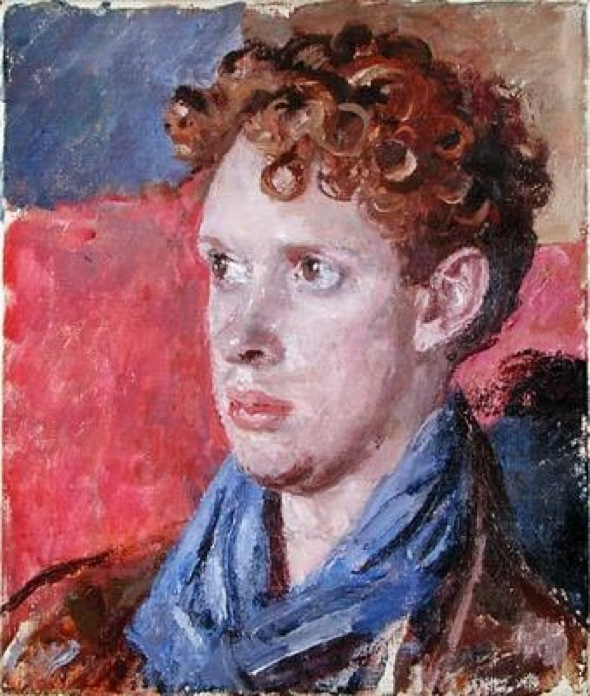 Dylan Thomas died young after a far from gentle life.
There was anger and struggle and misunderstanding.
But he left behind a legacy of musical language few poets have ever matched.