I have always enjoyed the Christmas song, "The Twelve Days of Christmas."
In my younger days, when we entertained many of the family at christmas-time, it was a tradition that my cousin John would conduct us and we would all lustily sing (and laugh) until all the gifts had been delivered. 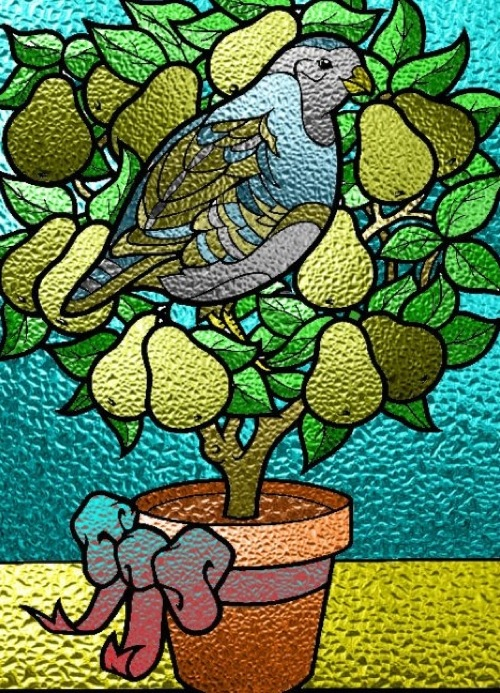 I am sure you know the song well, but just in case, here is the first verse....
On the first day of Christmas,
my true love sent to me
A partridge in a pear tree.

And the second....
On the second day of Christmas,
my true love sent to me
Two turtle doves,
And a partridge in a pear tree. 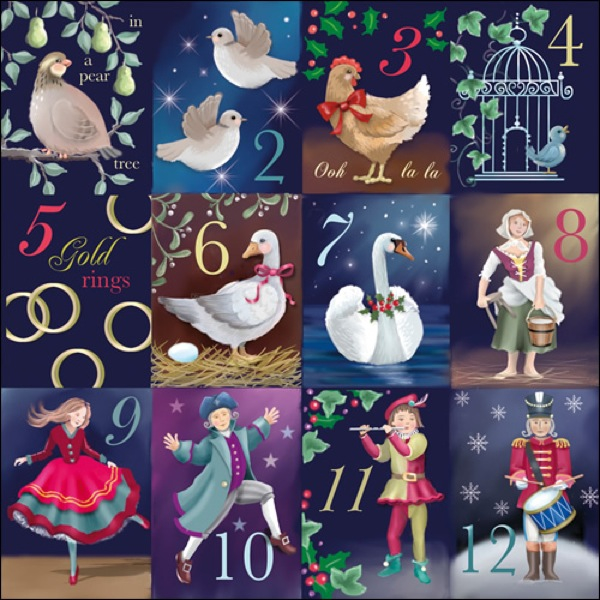 Imagine, just imagine, that poor lady, opening her door each day to find the postman waiting with the latest gift, each one more difficult to deal with than the last.

Where would you put all those maids a-milking?
And the leaping Lords?
And all those drummers, especially if they kept on drumming?

What a terrifying experience!

Well, there was a day when a certain Mrs. Tottenham in London had a far worse time, and all as the result of a bet!

The Berners Street Hoax was an example of an actual, real-life multiple delivery, but even worse, ALL IN ONE DAY !

In The Book of Literary Curiosities (William S. Walsh, 1893), we can read an account of this extremely well-turned practical joke, played by Theodore Hook. 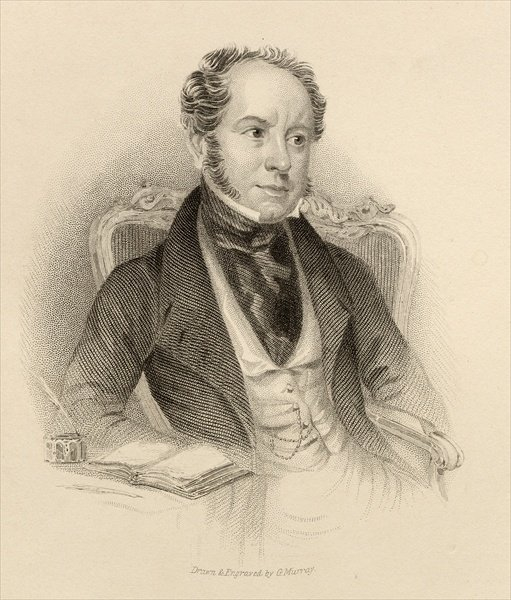 Theodore Hook was a famous practical joker, and once, at least, he perpetrated a jest that disturbed all London and amused all England.
This was the famous Berners Street hoax.

Berners Street in 1809 was a quiet, respectable street in the City of Westminster, inhabited by well-to-do families, and even people of social importance, among them the Bishops of Carlisle and of Chester and Earl Stanhope.
Hook had made a bet with his friend, Samuel Beazley, that he could transform any house in London into the most talked-about address in a week; this he achieved by sending out thousands of letters in the name of Mrs Tottenham, who lived at 54 Berners Street, requesting deliveries, visitors, and assistance. 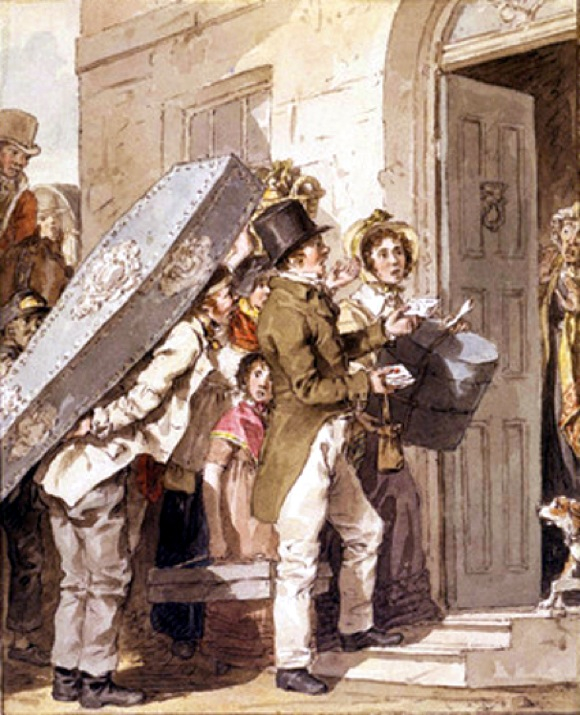 On 27th November, at five o’clock in the morning, a sweep arrived to sweep the chimneys of Mrs Tottenham's house.
The maid who answered the door informed him that no sweep had been requested, and that his services were not required.
A few moments later another sweep presented himself, then another, and another, 12 in all.
After the last of the sweeps had been sent away, a fleet of carts carrying large deliveries of coal began to arrive, followed by a series of cakemakers delivering large wedding cakes, then doctors, lawyers, vicars and priests summoned to minister to someone in the house they had been told was dying.
Coffins were delivered.
Fishmongers, shoemakers, and over a dozen pianos were among the next to appear, along with "six stout men bearing an organ".
Coachmakers, clock-makers, carpet-manufacturers, confectioners, wig-makers, mantuamakers, opticians, and curiosity-dealers followed with samples of their wares.
A crowd of coachmen, footmen, cooks, housemaids, and nursery-maids arrived in quest of situations.
Horse-drawn carts loaded with barrels of beer attempted to make their way to Mrs Tottenham's door.

Later in the day dignitaries, including the Governor of the Bank of England, the Duke of Gloucester, the Archbishop of Canterbury and the Lord Mayor of the City of London also arrived.
The narrow streets soon became severely congested with tradesmen and a rapidly increasing crowd of onlookers, cat-calling and cheering at each new arrival.
Deliveries and visits continued until the early evening, bringing a large part of London to a standstill.
So many people crowded into the narrow street that fights broke out.
All the roads in the area were jammed with traffic.
Central London was completely blocked. 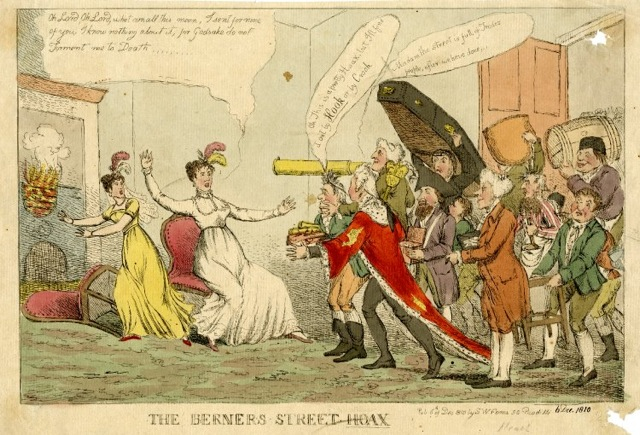 Police-officers were despatched to maintain order in Berners Street.
They found it choked up with vehicles, jammed and interlocked one with another.
The drivers were infuriated; the disappointed tradesmen were clamouring for vengeance.
Some of the vans and goods were overturned and broken; a few barrels of ale had fallen a prey to the large crowd and fuelled the general excitement.
All day and far into the night this state of things continued; meanwhile, the old lady and the inmates of adjoining houses were imprisoned in their homes.

Certainly, Theodore had won his bet!

Hook stationed himself in the house directly opposite 54 Berners Street, from where he and his friend spent the day watching the chaos unfold.

Despite a "fervent hue and cry" to find the perpetrator, Hook managed to evade detection, although many of those who knew him suspected him of being responsible.
It was reported that he felt it prudent to be "laid up for a week or two" before embarking on a tour of the country, supposedly to convalesce.
The site at 54 Berners Street is now occupied by the Sanderson Hotel. 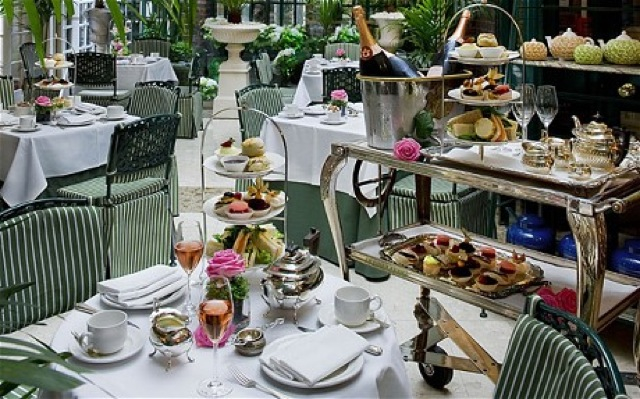 Apparently, they produce the best afternoon teas in London! 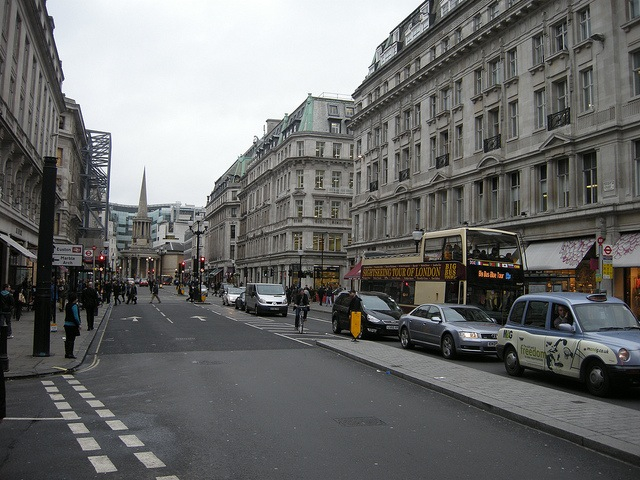 WHO WAS THEODORE HOOK?

Some would say that Theodore Hook is the forgotten genius of the English language.
He founded, and wrote anonymously, the brilliantly satirical John Bull newspaper which directly influenced British history in 1820. 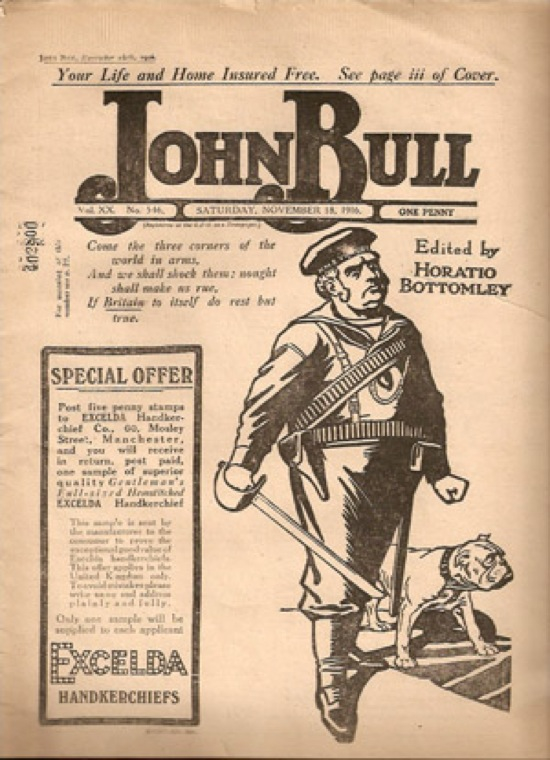 This is a page of John Bull, 1916
Hook created a style of satirical magazine which has lasted to the present day.
John Bull continued to be published, although it changed to accommodate social developments, until well into the second half of the 20th century. 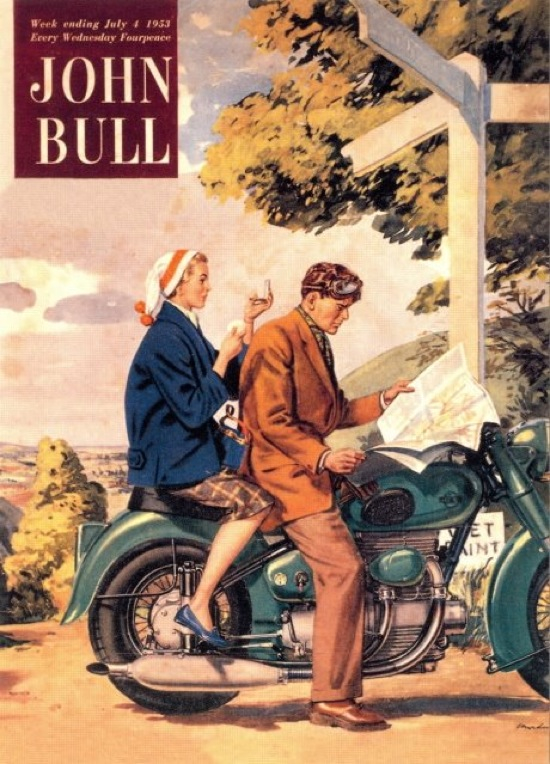 He was the only 'improvisatore' whom the English language has known, instantly composing witty songs on any subject, and was much admired for this by the Prince Regent.
I suppose he was the first ever "rapper."
He was England's best-selling novelist immediately before Charles Dickens.
He was an English man of letters and composer, and briefly a civil servant in Mauritius.

Hook was born in Charlotte Street, Bedford Square, London, on the 22nd September 1788.
His father, James Hook (1746–1827), was a composer of popular songs; his elder brother, also James Hook, became Dean of Worcester.
He spent a year at Harrow School, and subsequently matriculated at the University of Oxford, but he never actually resided at the university.
His father took delight in exhibiting the boy's musical and metrical gifts, and the precocious Theodore became a pet of the green room.
At the age of sixteen, in conjunction with his father, he scored a dramatic success with The Soldier's Return, a comic opera, and this he followed up with a series of popular ventures with John Liston and Charles Mathews.
He took up residence at St Mary Hall, Oxford University, leaving after two terms to resume his former life.

His gift of improvising songs charmed the Prince Regent into a declaration that something must be done for Hook, who was appointed accountant-general and treasurer of Mauritius with a salary of £2,000 a year.
He was the life and soul of the island from his arrival in October 1813, but a serious deficiency having been discovered in the treasury accounts in 1817, he was arrested and brought to England on a criminal charge.
A sum of about £12,000 had been abstracted by a deputy official, and for this amount Hook was held responsible.
During the scrutiny of the audit board he lived obscurely and maintained himself by writing for magazines and newspapers.
In 1820 he launched the newspaper John Bull, the champion of high Toryism and the virulent detractor of Queen Caroline.
Witty criticism and pitiless invective secured it a large circulation, and from this source Hook derived, for the first year at least, an income of £2,000. 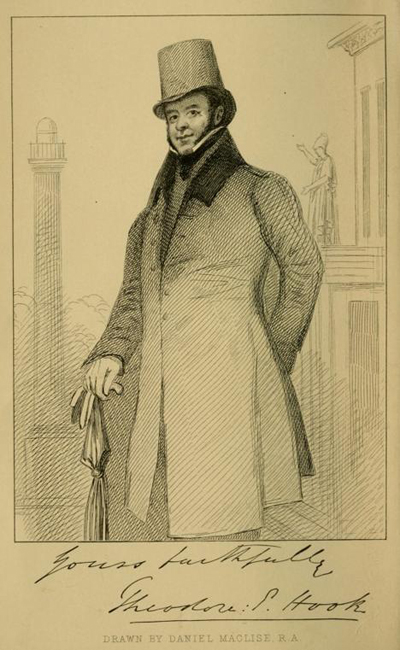 He was, however, arrested for the second time on account of his debt to the state, which he made no effort to defray.
While he was confined, he wrote the nine volumes of stories afterwards collected under the title of Sayings and Doings (1824–1828).
In the remaining 23 years of his life he produced 38 volumes, besides articles, squibs and sketches.
They include Maxwell (1830), a portrait of his friend the Reverent E. Cannon; Love and Pride (1833); the autobiographic Gilbert Gurney (1836) and Gurney Married (1838); Jack Brag (1837) and Peregrine Bunce (1842).
He did not finish a biographical work on Charles Mathews.
His last novel was Births, Marriages and Deaths (1839).

Work had already begun to tell on his health, when Hook returned to his old habits; and a prolonged attempt to combine industry and dissipation resulted in the confession that he was done up in purse, in mind and in body too at last.
He died at home in Fulham on 24 August 1841.
He had never married, but lived with Mary Anne Doughty; they had six children.
His estate was seized by the Treasury. 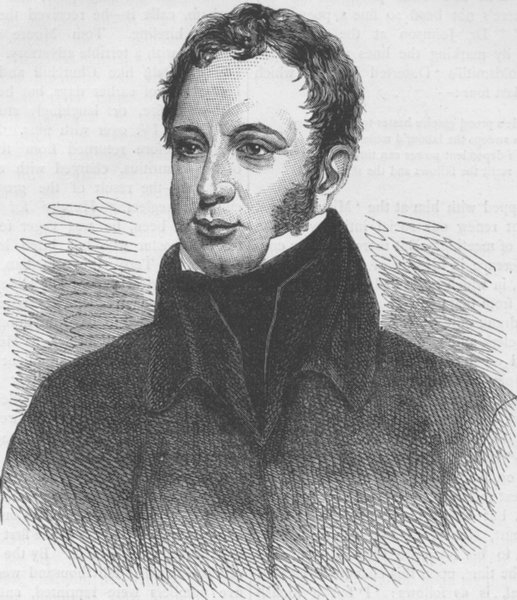 In spite of a far from traditional career, with many clouded periods, he was a highly intelligent and creative writer.
Hook is remembered as one of the most brilliant figures of Georgian times.
He inspired the characters of Lucian Gay in Benjamin Disraeli's novel Coningsby and Mr Wagg in Thackeray's Vanity Fair.
Coleridge praised him as being "as true a genius as Dante".

i am not quite sure how poor Mrs Tottenham would have described him!