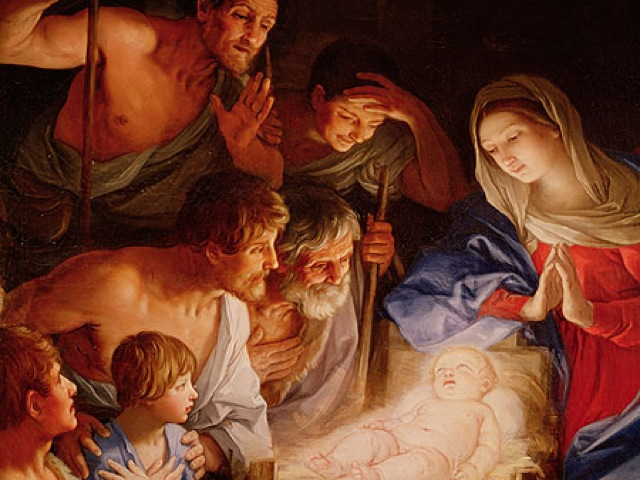 I have always enjoyed Thomas Hardy's poetry.
It has a simplicity and honesty about it.
This particular poem is suitable for the season....

It is based on a very old country tradition, that on Christmas Eve at midnight the farm animals kneel to honour the baby Jesus, as their ancestors did so long ago.

Christmas Eve, and twelve of the clock:
"Now they are all on their knees,"
An elder said as we sat in a flock
By the embers in hearthside ease. 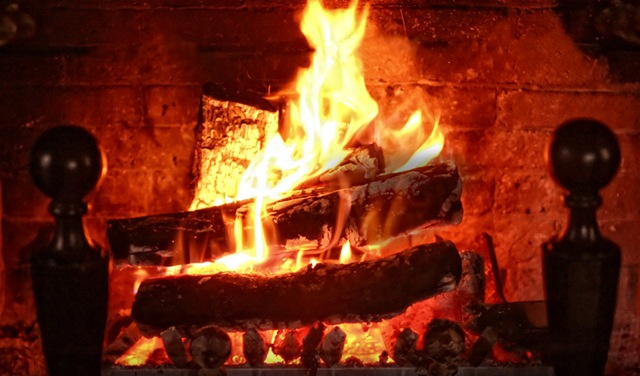 We pictured the meek mild creatures where
They dwelt in their strawy pen,
Nor did it occur to one of us there
To doubt they were kneeling then.

So fair a fancy few would weave
In these years! Yet, I feel,
If someone said on Christmas Eve,
"Come; see the oxen kneel
In the lonely barton by yonder coomb
Our childhood used to know,"
I should go with him in the gloom,
Hoping it might be so. 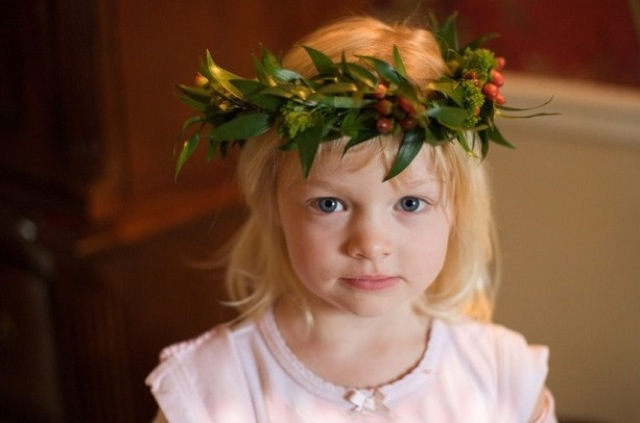 The Stables At Midnight
A young girl's painting after she heard the story from her father. 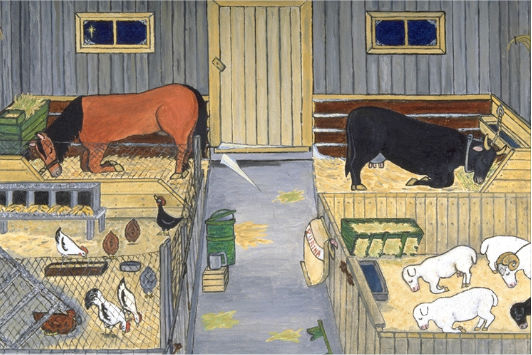 I found this story on Google.
It is written by Anna Flyzik as if it is absolutely true.
Can I believe it? Perhaps......


It happened in 1991 or '92.
My marriage had ended, and I was leasing a farm as a boarding stable.
I had around 20 horses at Christmas that year.
My son was then 5 or 6 years old and knew the Thomas Hardy poem about all the animals kneeling down at midnight on Christmas Eve.
He begged and begged to go to the stable at midnight, but I put him off, not wanting to disappoint him in this year of so many disappointments.

You see, I had a lot of horses that did not like to lie down even in the wee hours of the night, including two mares whose owners told me they'd had those two for years and had yet to even see them off their feet.
A number of the others would lie down, but would immediately get up when someone entered the barn or came near them.
Well, that Christmas Eve, Conor woke up at 11:30 and begged to go to the stable to see if it was true.

My heart was a little heavy as we went down.
It was 11:59.
We entered the barn at midnight, flashlight in hand.
EVERY horse was kneeling.
We walked down one side and back up the other.
Every horse was kneeling; none got up.
None were flat on their sides, not even the yearling.
And the two mystery mares were also kneeling; so were the track lay-ups who always jumped to their feet when people approached: every single one of them.
It was so hushed and quiet and beautiful.
The faith of a child....

Conor is 13 now and stands 5'10.
He still says to me, "Remember that Christmas Eve when we went down to the barn to see if the horses were kneeling?"

Certainly, animals can, and do, kneel.
But are they getting up or going down in these pictures? 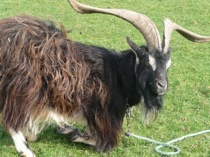 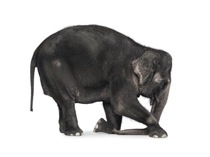 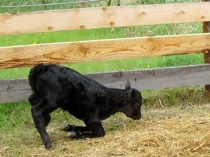 The poem is not Hardy's only version of the tradition.....
This little tale is also from Thomas Hardy, and is in his novel Tess of the d'Urbevilles.

It relies on the old folk tradition which inspired the poem, and which in fact he received from his mother.

"Once there was an old aged man over at Mellstock-William Dewy by name-one of the family that used to do a good deal of business as tranters over there, Jonathan, do ye mind?-I knowed the man by sight as well as I know my own brother, in a manner of speaking.
Well, this man was a coming home-along from a wedding where he had been playing his fiddle, one fine moonlight night, and for shortness' sake he took a cut across Forty-acres, a field lying that way, where a bull was out to grass.
The bull seed William, and took after him, horns aground, begad; and though William runned his best, and hadn't MUCH drink in him (considering 'twas a wedding, and the folks well off), he found he'd never reach the fence and get over in time to save himself.
Well, as a last thought, he pulled out his fiddle as he runned, and struck up a jig, turning to the bull, and backing towards the corner.

The bull softened down, and stood still, looking hard at William Dewy, who fiddled on and on; till a sort of a smile stole over the bull's face.
But no sooner did William stop his playing and turn to get over hedge than the bull would stop his smiling and lower his horns towards the seat of William's breeches. 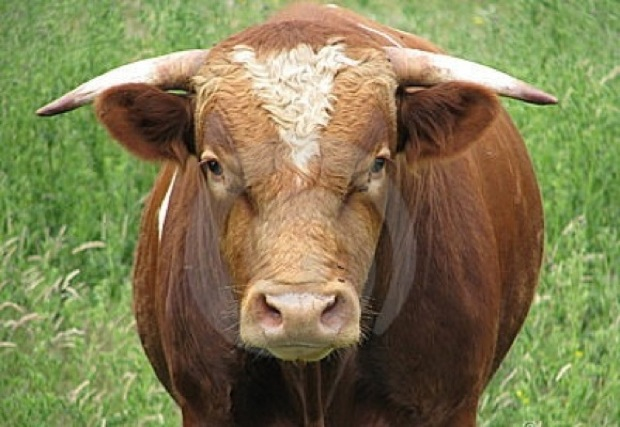 Well, William had to turn about and play on, willy-nilly; and 'twas only three o'clock in the world, and 'a knowed that nobody would come that way for hours, and he so leery and tired that 'a didn't know what to do.
When he had scraped till about four o'clock he felt that he verily would have to give over soon, and he said to himself, 'There's only this last tune between me and eternal welfare! Heaven save me, or I'm a done man.'

Well, then he called to mind how he'd seen the cattle kneel o' Christmas Eves in the dead o' night.
It was not Christmas Eve then, but it came into his head to play a trick upon the bull.
So he broke into the 'Tivity Hymm, just as at Christmas carol-singing; when, lo and behold, down went the bull on his bended knees, in his ignorance, just as if 'twere the true 'Tivity night and hour. 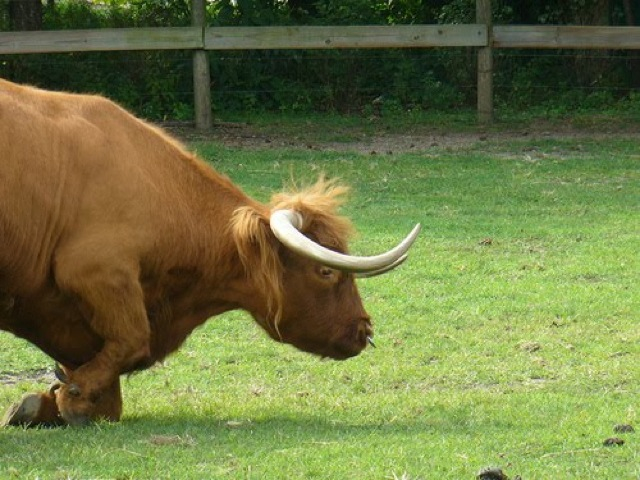 As soon as his horned friend were down, William turned, clinked off like a long-dog, and jumped safe over hedge, before the praying bull had got on his feet again to take after him.

William used to say that he'd seen a man look a fool a good many times, but never such a fool as that bull looked when he found his pious feelings had been played upon, and 'twas not Christmas Eve. …"
Thomas Hardy, Tess of the d'Urbervilles