From Christmas Stocking to Chelsea

Another Christmas has gone by, and I have had to sit on the sidelines and observe; how very different the celebration of the festival has become!
Even when I was a little girl, the material aspects of the Christmas season, the eating and drinking and partying, were overtaking the simple notion of celebrating the birth of Christ: but for children the excitement still lay in hoping for, but not necessarily choosing, presents.
It seems to have been replaced by a confident expectation of receiving a number of requested items.
Children in the playground no longer ask,"What do you want for Christmas?"; instead, they say, "What are you getting for Christmas?"
Modern children miss out on surprises!

I knew that some children wrote letters to Father Christmas, in which they asked for special toys, and then threw their lists on the fire.
The notes would frizzle up and the paper ash would fly up the chimney, where by some obscure magical process they would arrive in a legible state at the North Pole and be read by Father Christmas. 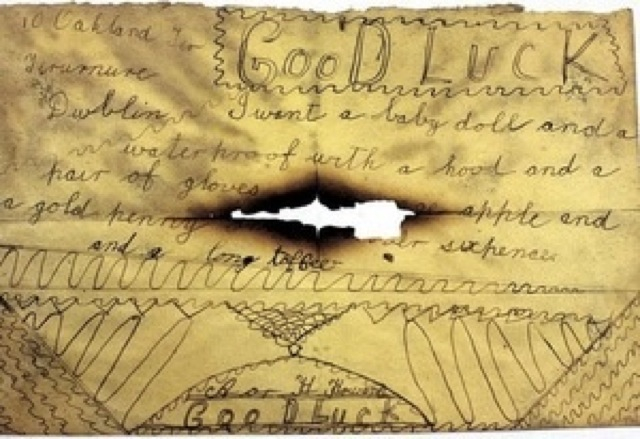 In my little family we didnt use this process.
I cant remember even being asked what I would like, although there may have been such conversations.
But I did get presents!

My brother and I didnt hang stockings up, we each put a pillow-case at the foot of the bed.
It was so hard to sleep on Christmas Eve!

In the morning, there the pillowcase was, lumpy and bumpy, filled with surprises!

Christmas Day began very early.... There was no heating, and the bedroom air was cold, but excitement kept us warm...
Everything was unexpected (sadly, parents have stolen the element of surprise from their children by giving them the power to decide what they will receive.)
There were no really large and expensive gifts, but some were truly memorable.
I once had a metal dolls' pram, and once a tin of biscuits shaped like a lorry, with two front lamps worked by a battery. 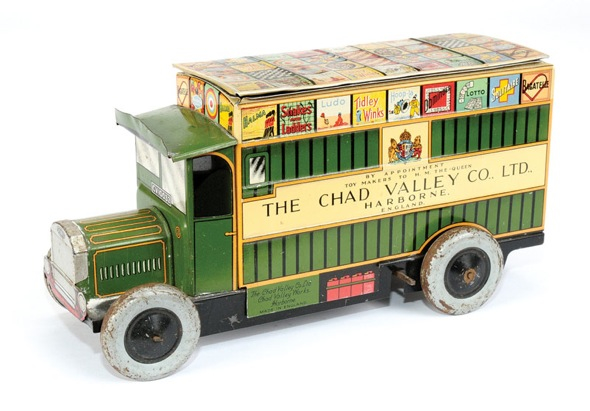 One year I had a clockwork chicken, which creakily and whirrily wobbled along, then stopped and laid an egg before continuing on its way.
But my favourite ever present was a cardboard sweetshop. It was amazing! 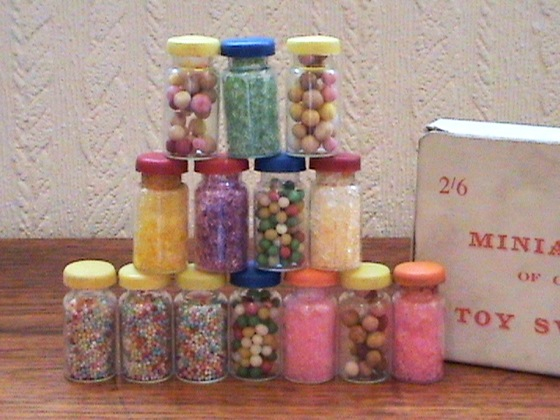 It had little tin scales, a till, miniature bottles of tiny sweets, and a top floor like a verandah with tables and chairs, celluloid customers in bathing costumes with movable arms and legs, and at the side a LIFT!

It worked by string, and I played with it all day.... 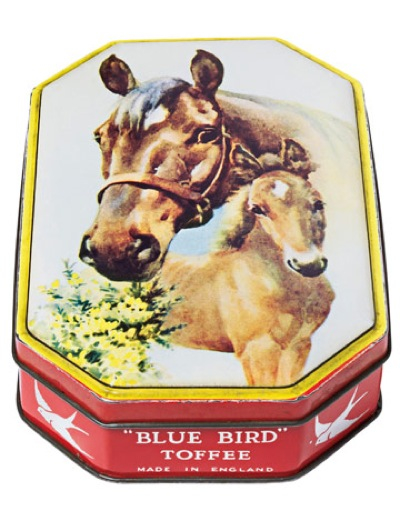 Most years we got a small tin of toffees, and usually there was a Magic painting book.
The print in these books contained dye, and all you needed was a brush and water; the water released the dye, and Hey Presto!
there was a magically coloured picture. 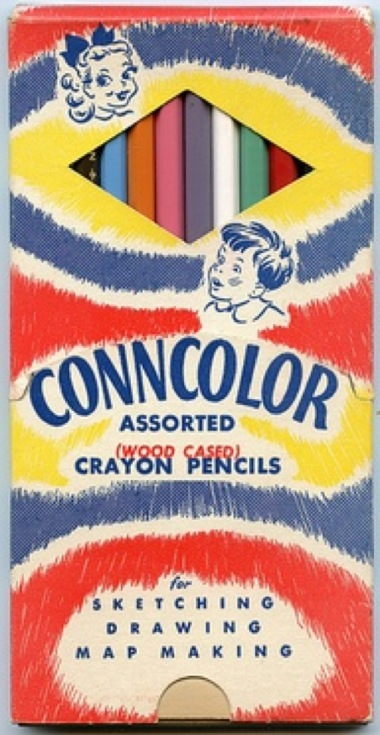 There were tracing books, too.
The man who kept the sweetshop round the corner from our house used to pin my pictures up in his shop.
It was almost like being published. 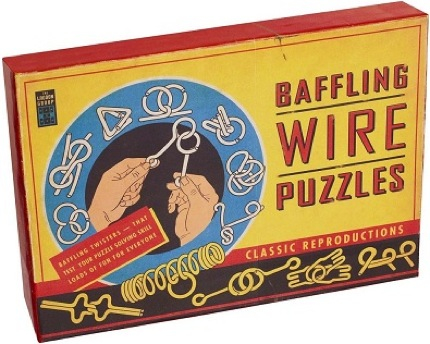 Other possibilities were wire puzzles, which my Dad loved.
I could never work out how to do them. 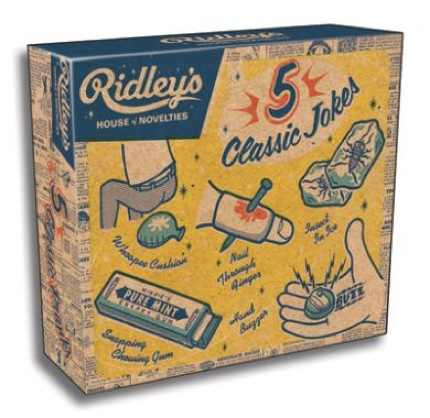 There were magic tricks and jokes in boxes.
And there were paper dolls to cut out and dress. 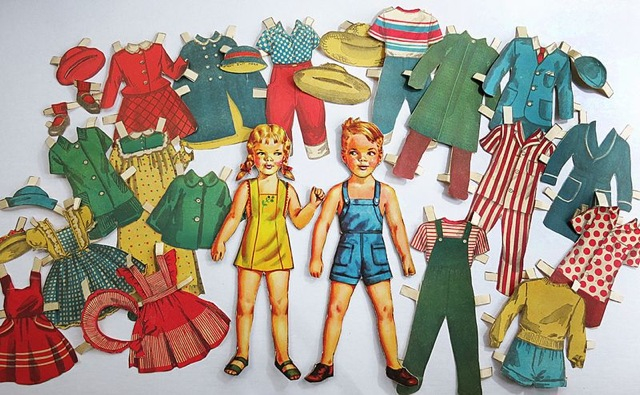 Many hours were spent with this wonderful material. 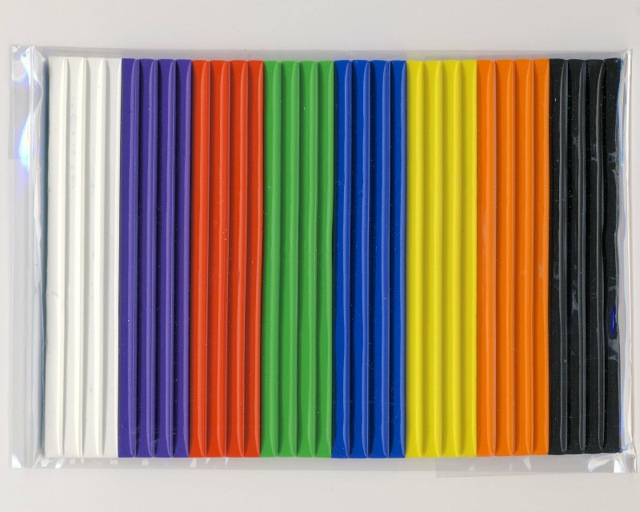 It would start off in separate strips of bright colours, and slowly get mixed together until it was a sort of pinky grey-brown.

Our parents would circle us like hawks as we played, pouncing on bits that escaped and mught be trodden into the linoleum. 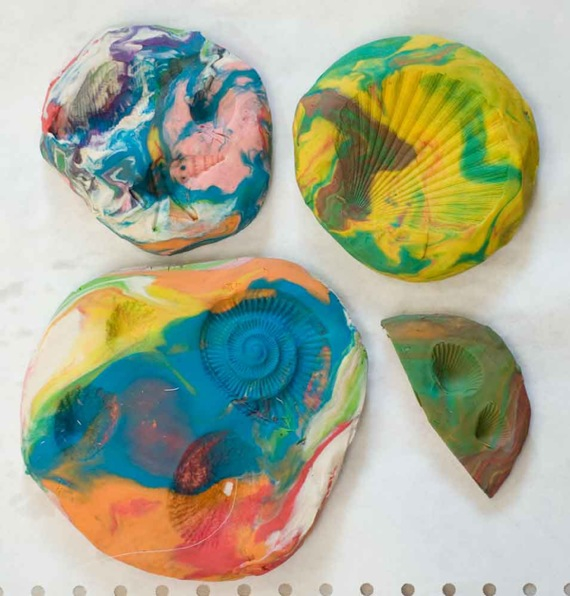 We kept it all in a tin.

I still like to get my hands on plasticine, and am lucky enough to be able to play with my great-grandchildren and their little store. 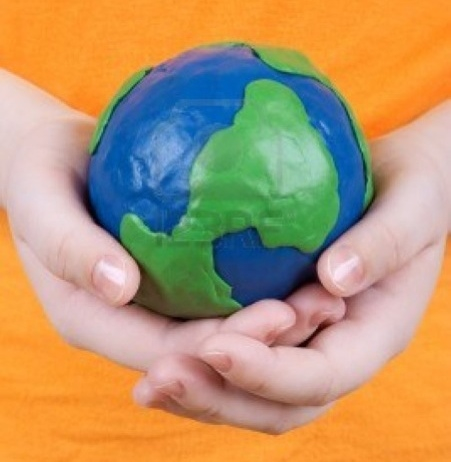 Where did plasticine come from?

Plasticine was formulated by art teacher William Harbutt of Bathampton, in Bath, England, in 1897. 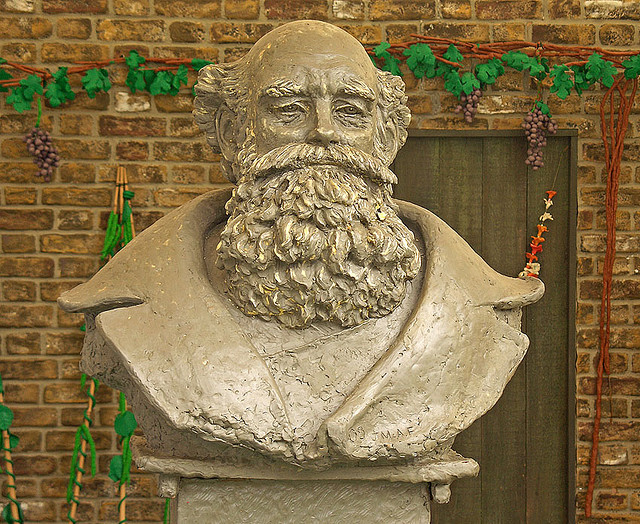 This is a bust of William, entirely made in plasticine.

He wanted a non-drying clay for his sculpture students.
The best quality of the material is that it doesnt go hard.
Although the exact composition is a secret, Plasticine is composed of calcium salts (principally calcium carbonate), petroleum jelly, and long-chain aliphatic acids (principally stearic acid).
I dont know what the latter two are....

It is non-toxic, sterile, soft, malleable, and does not dry on exposure to air (unlike superficially similar products such as Play-Doh, which is based on flour, salt and water).
It is much more easily modelled than Play-Doh, which produces more childish, clumsier models.
It cannot be hardened by firing; it melts when exposed to heat, and is flammable at much higher temperatures.

And it is fun to play with! 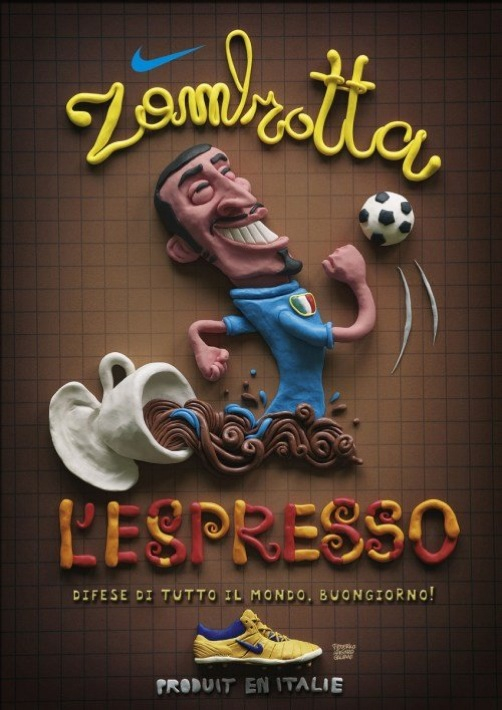 A patent was awarded in 1899, and in 1900 commercial production started at a factory in Bathampton.
The original Plasticine was grey, but the product initially sold to the public came in four colours.
It was soon available in a wide variety of bright colours.

Plasticine was popular with children, widely used in schools for teaching art, and has found a wide variety of other uses (for example moulding casts for plaster, and plastics). 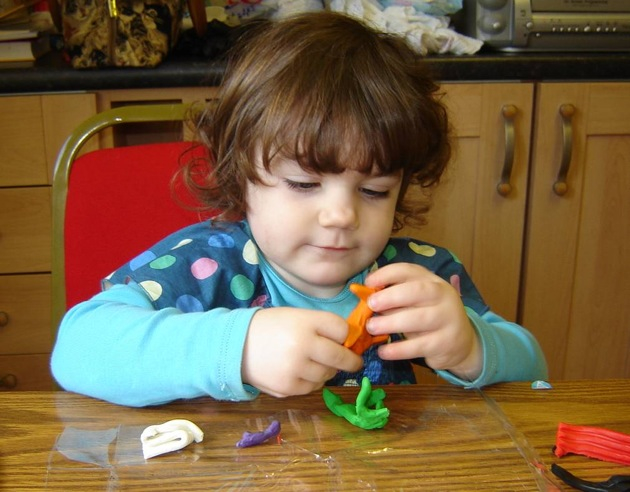 The Harbutt company promoted Plasticine as a children's toy by producing modelling kits in association with companies responsible for popular children's characters such as Noddy, the Mr. Men and Paddington Bear.

The original Plasticine factory was destroyed by fire in 1963 and replaced by a modern building.
The Harbutt company continued to produce Plasticine in Bathampton until 1983.
It is currently made in Thailand.

From 1983 to 2006, the brand went through a number of ownership changes and was off the market for a long time.
In 2006, when Humbrol went into administration, Flair bought the Plasticine brand outright; it is as popular today as ever, and far more creative to use than many modern toys.

A similar product, "Kunst-Modellierthon" (known as Plastilin), was invented by Franz Kolb of Munich, Germany in 1880.
This product is still available, known as "Münchner Künstler Plastilin" (Munich artists' plasticine).

Plasticine is often used in clay animation.
One of its main proponents is Aardman Animations' Nick Park, who used characters modeled in Plasticine in his Oscar-winning short films A Grand Day Out (1989), The Wrong Trousers (1993) and A Close Shave (1995), as well as the feature film The Curse of the Were-Rabbit.
This technique is popularly known as claymation in the US, and is a form of stop motion animation. 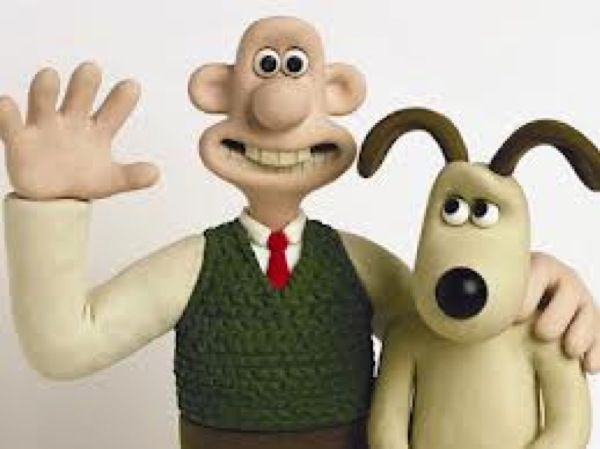 Plasticine is appealing to animators because it can be used with ease: it is mouldable enough to create a character, flexible enough to allow that character to move in many ways, dense enough that it can retain its shape easily when combined with a wire armature, and does not melt under hot studio lighting. 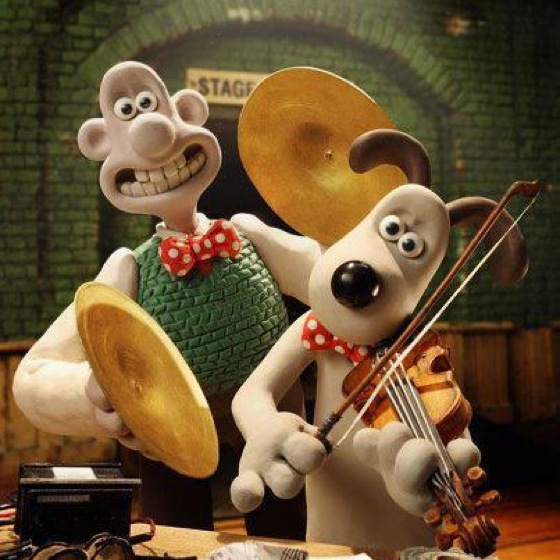 GAMES
Plasticine-like clays are also used in commercial party games such as Cranium, Rapidough and Barbarossa. 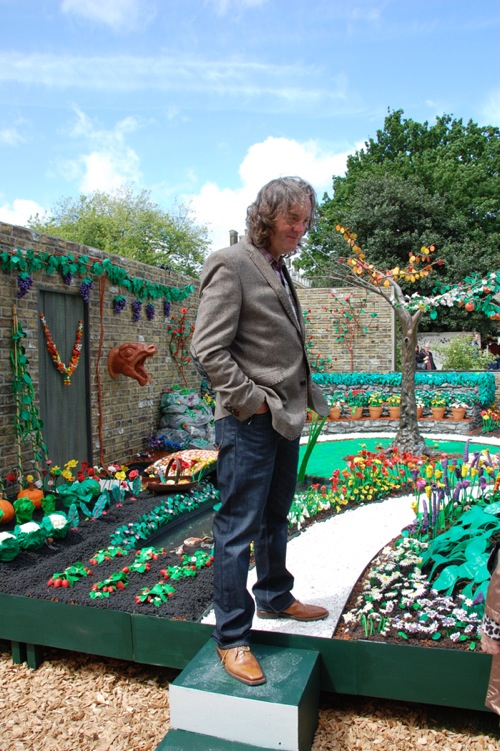 This was a truly imaginative project which caused much dissension in the gardening world, but was hugely popular among the general public.
Television presenter James May together with Chris Collins, Jane McAdam Freud, Julian Fullalove and around 2000 members of the public created a show garden for the 2009 Chelsea Flower Show made entirely of Plasticine, and called 'Paradise in Plasticine'. 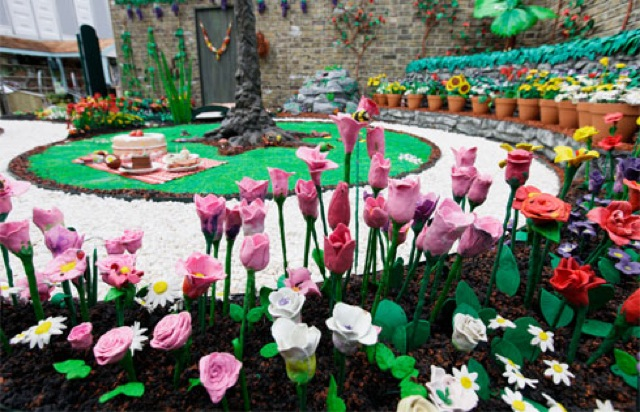 The garden took 6 weeks to complete.
All of the available 24 colours were used.
May said, "This is, to our knowledge, the largest and most complex model of this type ever created."
There were many objections from the experts, who said it couldn't be considered as part of the standard judging criteria because it contained no real plants. 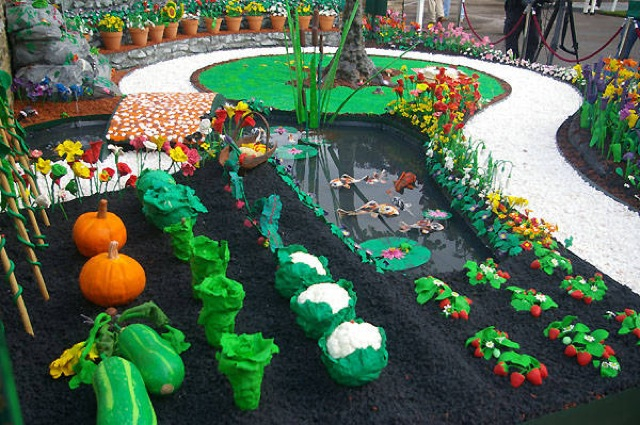 The people passing through James May's plasticine creation at Chelsea Flower Show seemed to love it.
A few comments:
"People at this show take gardening a bit too seriously," said one amused visitor."This is poking fun at it all."
The plant enthusiasts in the pavilion were less keen:
"Chelsea should be about the plants, I don't mind if they do this kind of thing occasionally, but it does detract attention." 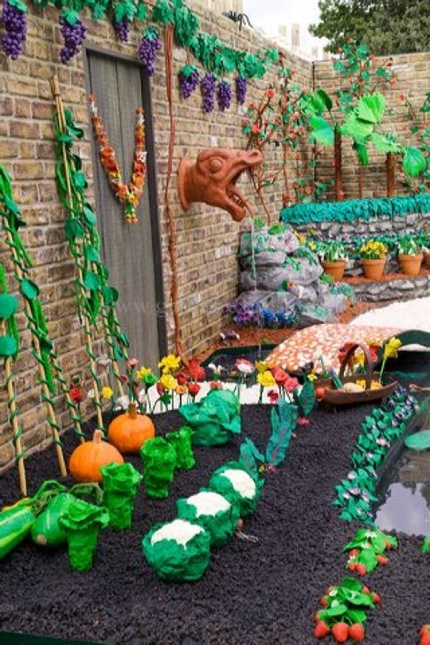 May's garden was a giant clay model.
Its bright artificiality presented a real challenge to the conservative Royal Horticultural Society (RHS), sitting right in the middle of their Royal Hospital showground.
In all rwo and a half tonnes of plasticine, in all 24 colours, were moulded into a twist on the English cottage garden. 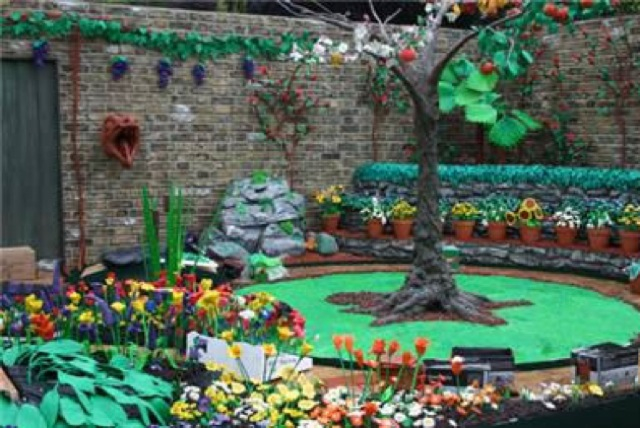 An apple tree with branches experiencing all four seasons simultaneously dominates the lawn; clay fish sun themselves in the stream, and the walls are covered in rainbow-hued roses.
There is a tempting plcnic spread out on the lawn. 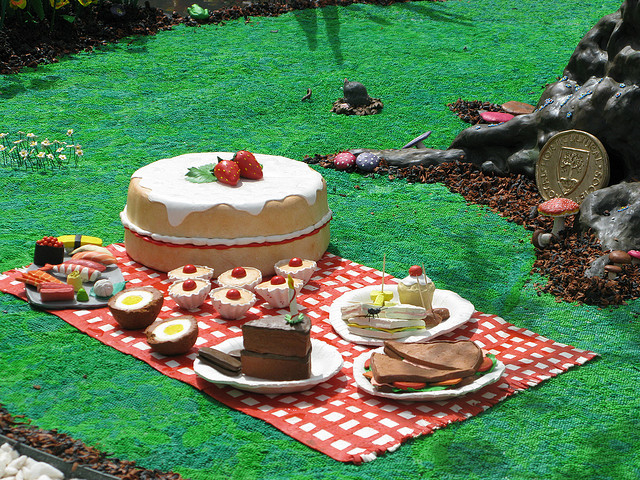 While it made many visitors smile, there was confusion as to whether it should be seen as a piece of conceptual art or as a genuine show garden.
The BBC's James Wong was clear: "If I were a designer and I'd had my garden judged against it, I'd be a bit annoyed.
But if you see it as a big colourful outdoor sculpture, it's amazing."
Traditionally, the RHS confines the more fanciful gardens to the Hampton Court Palace Flower Show in July.
But even there the strangeness of the entries can provoke the sort of public outcry usually reserved for the Turner prize shortlist.
So what made that same public queue to see May's masterpiece? 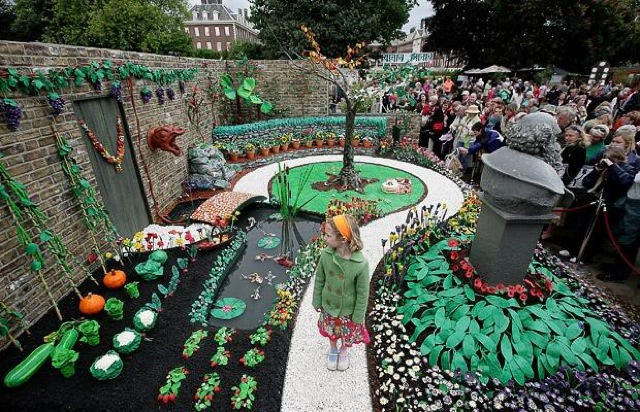 Firstly, the garden had a sense of humour.
"It's whimsical," says the garden's attendant.
"People are smiling. Look at them."
He was right, smiling people were pointing and discussing the mechanics of modelling an entire garden – including cauliflowers, flowerpots and a whole grapevine – entirely from plasticine.
"Chelsea pensioners made all the poppies," pointed out one visitor, who was visibly touched.
Onlookers were further impressed by the amount of time and labour that went into its creation.

In the end, the people won; the public voted for it in their thousands; it went on to win the Royal Horticultural Society's "peoples choice" for best small garden, and eventually it was awarded an honorary gold award made from Plasticine.

Wonderful!
The first ever gold medal in Plasticine 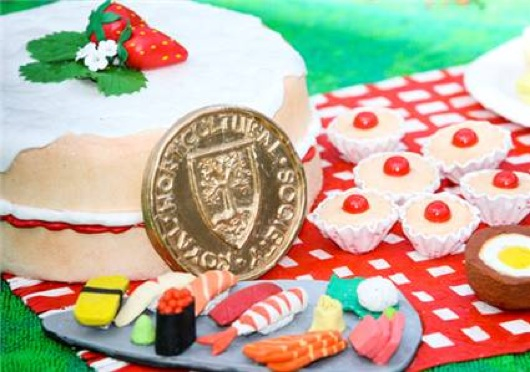 The garden now resides in Burton upon Trent's Octagon Shopping Centre, as a local attraction.

An odd use of Plasticine of which you may not have heard...
Athletics officials in high level long jump and triple jump competitions use plasticine to help determine if the competitors are making legal jumps.
A 10 centimeter strip of plasticine is placed beyond the take-off line.
If an athlete leaves a mark in the plasticine, it is considered proof that the jump was a foul and the attempt is not measured.