During the Second World War, as the danger of a German invasion grew, I was evacuated from Brighton, along with many hundreds of youngsters, to Holmfirth, a small town in Yorkshire.
It was my first really long train journey, and took us two whole days.
At the time I had never heard of Holmfirth; it seemed so far away from home, and I felt like an explorer in a foreign land.

The dialect sounded strange, I was very homesick; the family were very kind, but I knew I was second-best, and had to be on my best behaviour.
I had a strange address:
22 Paris,
Scholes,
Holmfirth,
West Riding. 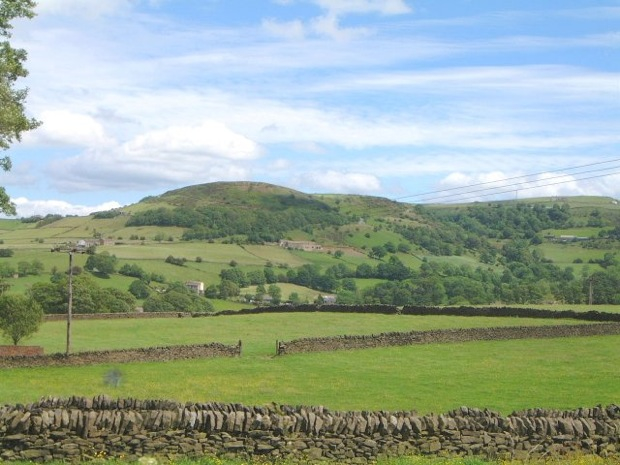 Many years later, when I watched "The Last of the Summer Wine", which was filmed in and around the Yorkshire village where I had been to school, and on the hills I had walked across to church, it was quite an experience for me to see Compo, Nora Batty and their friends walking along the same roads, and eating in the same homely cafe in the streets of Holmfirth, which had been my wartime home.
It was then I realised that I still had real affection for the little houses, the mills, the beautiful hills and the generosity of the people who had taken me in. 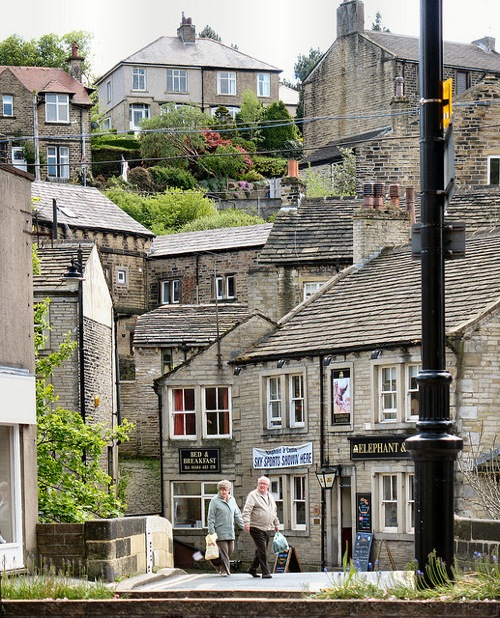 I have found, since then, that long before I was evacuated to Holmfirth, seemingly such a quiet backwater, it had already made its mark on history....

THE STORY OF HOLMFIRTH

The town originally grew up around a corn mill and bridge in the 13th century.
Three hundred years later Holmfirth expanded rapidly as the growing cloth trade grew and the production of stone and slates from the surrounding quarries increased.
The present parish church was built in 1778 after the first Church, built in 1476, was swept away in a flood the previous year.
In 1850 Holmfirth railway station opened, part of branch line built by the Lancashire and Yorkshire Railway Company.

It came to me as a surprise to learn, years later, that Holmfirth was once England’s answer to Hollywood.
This Yorkshire village has a special place in film-making history.
During the early 1900s Holmfirth was well known for film making; the West Yorkshire film industry, for a time, surpassed that of Hollywood in terms of productivity and originality. 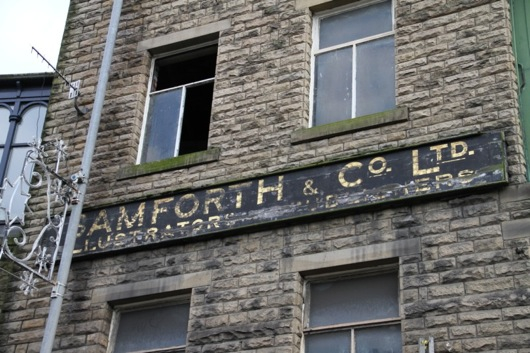 This was once the Film Studio in Station Road.
[Interestingly, ancient documents have the town's name spelt 'Holm Frith' which can be translated as 'Holly Wood', though the word "Firth" is an old English name meaning 'wood and woodland' indicating the name really means Holme woods.]
Only months after the first commercial films were produced by the Lumiere brothers in France, small manufacturers such as Riley Brothers of Bradford were making and selling movie cameras.
This led to film makers setting up all over the country.
One of the most successful was James Bamforth of Holmfirth. 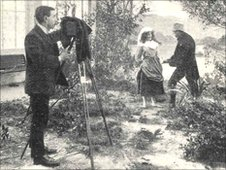 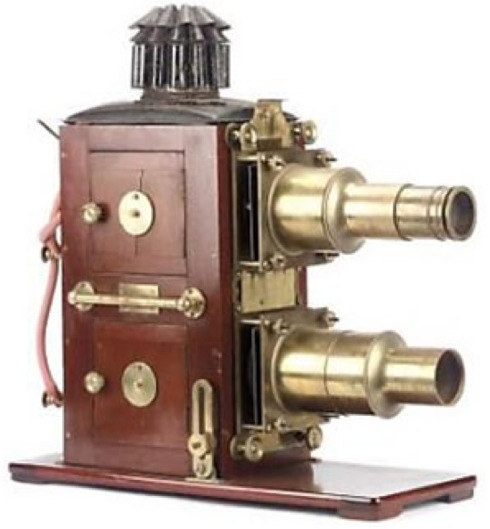 The company began by specialising in 'life model' slide sequences, in which simple narratives, usually conveying moral, temperance, and religious themes, were photographed in front of a painted backcloth; the models used were members of the Bamforth family and workforce, and other locals. 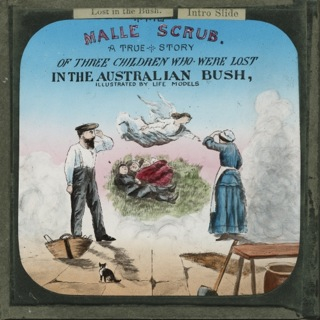 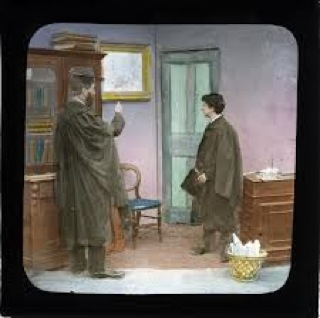 By the late 1890s, Bamforth production became increasingly dominated by slides intended to accompany popular songs and hymns.
Magic Lantern shows provided, in the beginning of the 20th century, evening entertainment for hundreds of people.
At Sunday-school parties, lectures and social gatherings the slides could educate, amuse and enthral with their photographs of other countries, moral and Bible stories, and bright moving kaleidoscopic views. 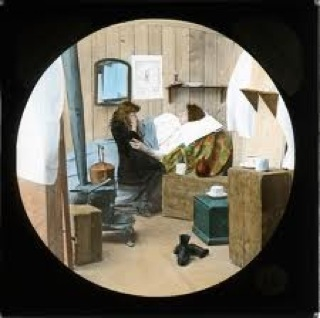 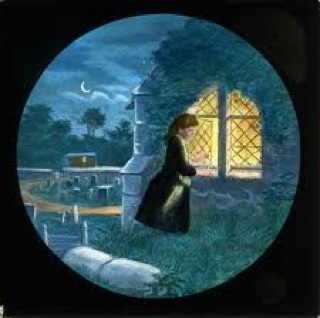 FROM SLIDES TO MOVIES

James Bamforth, having already made his name as a manufacturer of magic lantern slides, was one of the earliest successful film makers; it seemed a natural step for him to progress to making moving pictures.
He was a very talented artist and would paint spectacular backcloths, use costumes and props from his magic lantern slides and film in sets of tableaux.
They already possessed the necessary costumes, backgrounds, amateur actors and experience in plot construction. 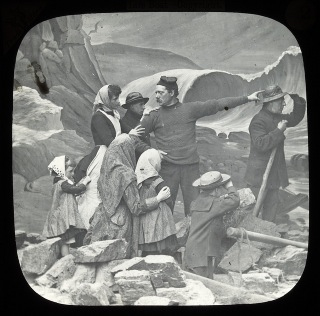 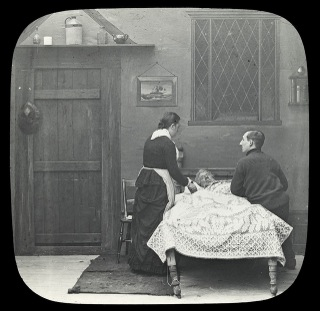 There were no professional film actors at the time, so Bamforth relied on local people for his movie casts.
Many village personalities starred in significant early films.
The local amateurs did not have very far to travel as many of Bamforth’s productions were filmed around Holmfirth.
Peter Bullock’s grandfather Fred was a blacksmith.
Peter says, "He’d get a call to come and do some filming, and had to down tools in the smithy and go and get dressed up in whatever garb they decided to wear."

LOCAL FILMING
According to Derek Bamforth, grandson of James, the local bank manager would allow his bank to be used for filmed robberies.
The local railway companies would also stop the trains to allow Bamforth to film railway scenes.

Maureen Jessop, whose parents acted in the films tells of how daily life came to a standstill when a film was in production.
She says,
"When it was washday and they were going to do a scene on the Holmfirth station they all had to go down and leave the washing." 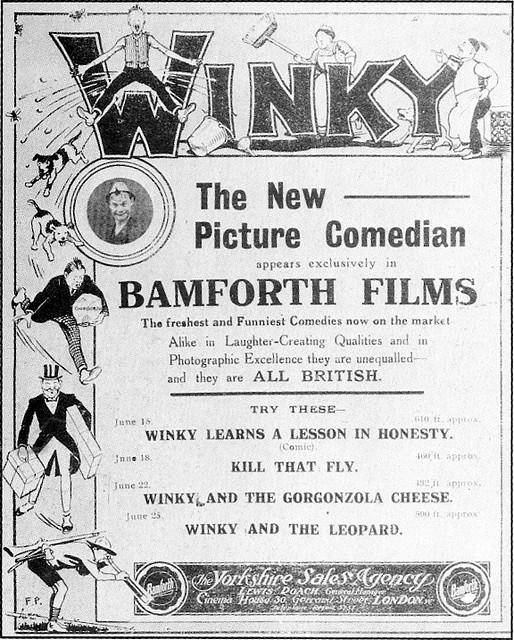 By 1898 Bamforths were making films with Riley Brothers of Bradford, who had been involved in the technology of the new medium since 1896.
Some of their films are of considerable significance, for despite the hackneyed plots - they were mostly 'borrowed' from ideas previously filmed by other producers - they reveal an embryonic understanding of the potential of film cutting and simple narrative construction.
In The Kiss in the Tunnel for example, a long shot of a train entering a tunnel away from camera is cut to a close shot of a couple embracing in the carriage, followed by another long shot of the train moving towards the camera.

But although the films were shown locally, they were not included in the Bamforth's catalogues, and the company did not return to film-making until 1913.
During the First World War their production finally ceased.
With the ever-increasing popularity of moving pictures at the turn of the century, the demand for lantern slides diminished, but the picture postcard was then also coming into its own, and some of the Bamforth slides were re-issued as sets of coloured postcards.
However, the firm survived into the 1990s as a manufacturer of seaside view cards, calendars and birthday cards. 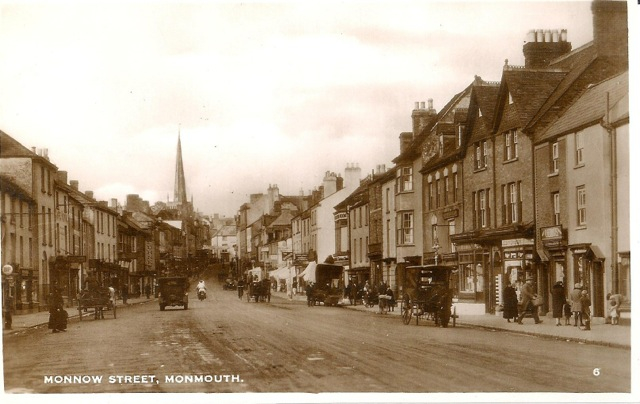 THE END OF AN ERA

When war broke out in 1914, movie-making in Holmfirth came to an end.
The material used to make film was needed to make explosives.
After the war, they never resumed film production.
By then, Hollywood had the movie world in its grip and small British producers would have struggled to compete.
It is amazing that such a small village should have played so great a part in the development of the movies. 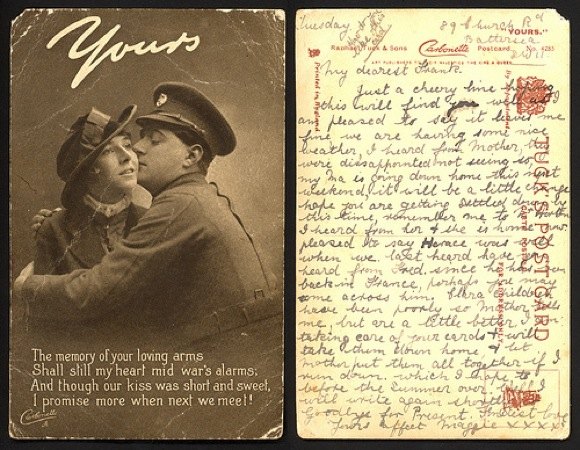 Now Bamforth’s started to manufacture postcards.
Tens of thousands of these, with verses and patriotic pictures, were sent from home to British and American soldiers fighting in France. 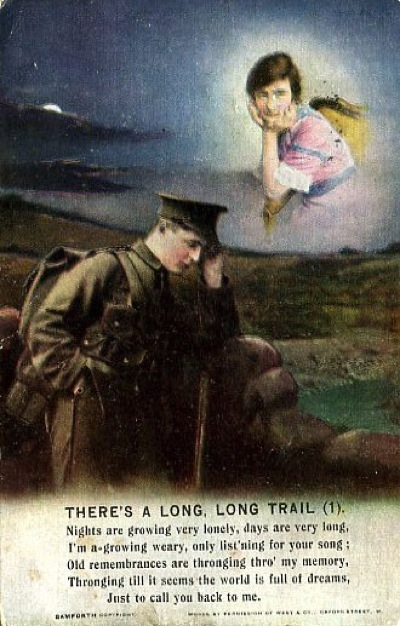 What is considered to be the “British” postcard is the saucy seaside postcard, which started life in the early 1930’s.
Bamforth's became well-known for these designs.
I was brought up in Brighton, so I saw hundreds of them... 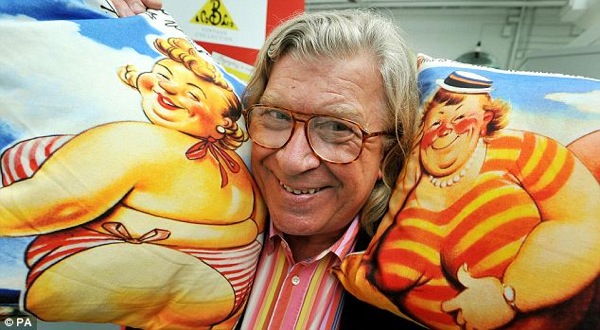 The saucy seaside postcard contained a humorous cartoon usually loaded with double entendres, big ladies, skinny men, glamorous girls, flustered doctors and naughty children.
The staple characters were extremely fat 'bouncy castle' ladies accompanied by small, ineffectual and hen-pecked husbands.
The picture said it all, and the cards struck a chord. - the success was phenomenal.
In its heyday, sales of the saucy postcard in the UK reached a phenomenal sixteen million cards a year! 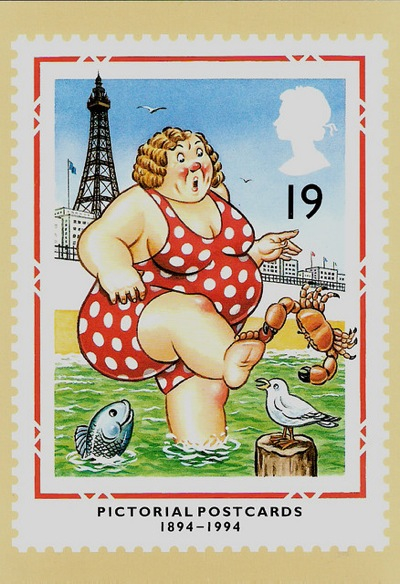 During the 1930’s to the early 1960’s the humour was quite clever with a high standard of artwork – the leading exponent at this time was the legendary Donald McGill.

The female artist Mabel Atwell, whose work was not of the rude genre, produced a famous series of postcards featuring cherubic children in cute, humorous situations.

Bamforth & Co was the most famous publisher of British postcards, producing scenic and seaside postcards which were distributed right across the country.
The Bamforth name is now chiefly remembered for its cheeky seaside postcards, drawn with crude vigour: vulgar perhaps, (my mother certainly did not approve of them!) but reshaped and retooled for a different era.
However, tastes change; Bamforth postcards gradually began to relyin on artists' drawings or straightforward, often garish, scenic views.
But production continued until the 1990s, well into the time when Holmfirth found new renown as the location setting for the TV comedy series Last of the Summer Wine (BBC, 1973-). 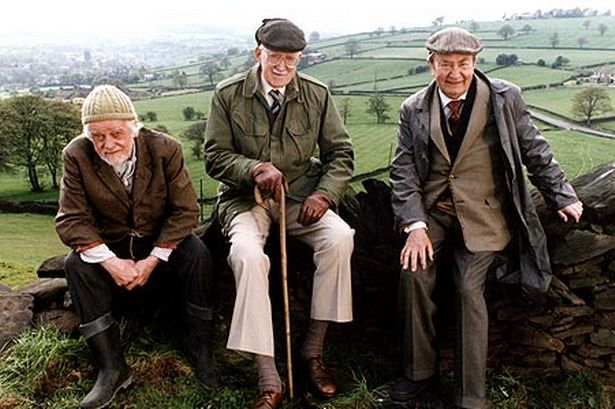 LAST OF THE SUMMER WINE
Nowadays, Holmfirth is chiefly remembered as a star of the small screen.
During the 20th century one of our most popular sitcoms, "The Last of the Summer Wine," was filmed there.
I can never watch any of the programmes without reliving my time in Yorkshire.
Famous actors are, even now, spotted in the town, and a whole tourist industry has been based around the sitcom.
There are cafes and shops with names associated with Nora and Compo.... 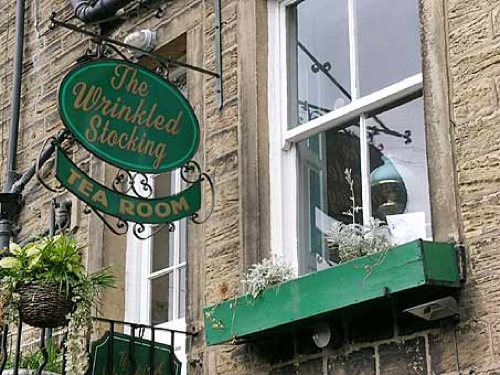 Perhaps no television programme has so defined the place in which it was made.
Go to beautiful Holmfirth in West Yorkshire, and not only will you see eager tourists snapping up LOTSW memorabilia, but take a tin bath and you can actually create your own Episode.
The Last of the Summer Wine is all there - the beflowered terraces, the bridges over the twinkling Holme River.
Down the winding streets, on the breeze coming off the Pennines, you will hear the names of Foggy, Nora Batty, Compo and Clegg.

As a child I had always wanted to live "in the country",and I was lucky to be offered shelter, even for a short time, in such a beautiful place. 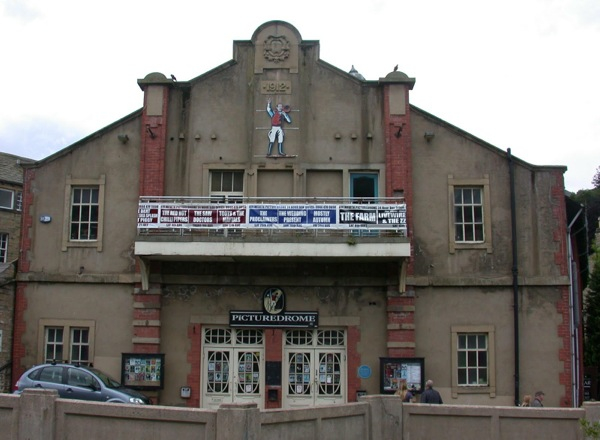 This is the Picturedrome, opened in 1912 and in its day offering films and variety.
It has been much altered over the last hundred years, but something of its former grandeur is still there.
As a youngster I saw my first ever coloured film, "The Private Lives of Elizabeth and Essex," with Bette Davis as Queen Elizabeth, in this cinema.
The red brick wall you can see in the foreground is actually the top of a bridge over a small river, which ran beside the Picturedrome.
I can remember that the gurgling of the river could be heard all through the film! And that I cried because the Queen let Essex die.... 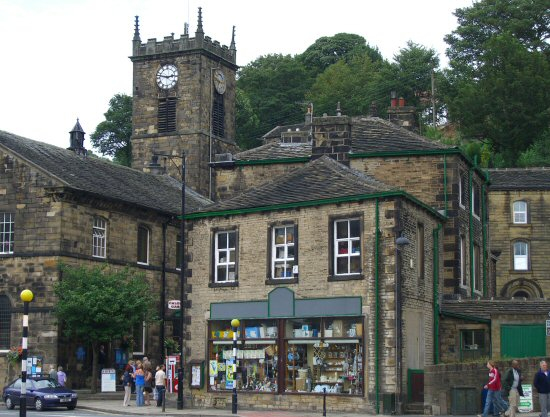 Finally:
I was confirmed in the church in Holmfirth.
The family who took me in made their mark on my life, in many ways.
I have a lot to thank them for.
< PrevNext >

#1 Richard Thorpe 2014-06-05 09:05
Lovely stories. I was born bred and schooled there, and now lived in Newcastle for 14 years. I noticed you were sent to live in Paris, where Roy Castle was born and spent his childhood. Just in case you don't know, from Tudor times through to the Napolionic wars, the prison at the back of the church held many prisoners of war over the years. When the Napolionic wars ended, the French prisoners were released and went to live in an area of Scholes which became "little Paris", or now "Paris". Regards, Richard.
Refresh comments list