1 A VERY FANCY ONE
The pretty Worcestershire village of Rous Lench has this unusual post box, set in its own little building. 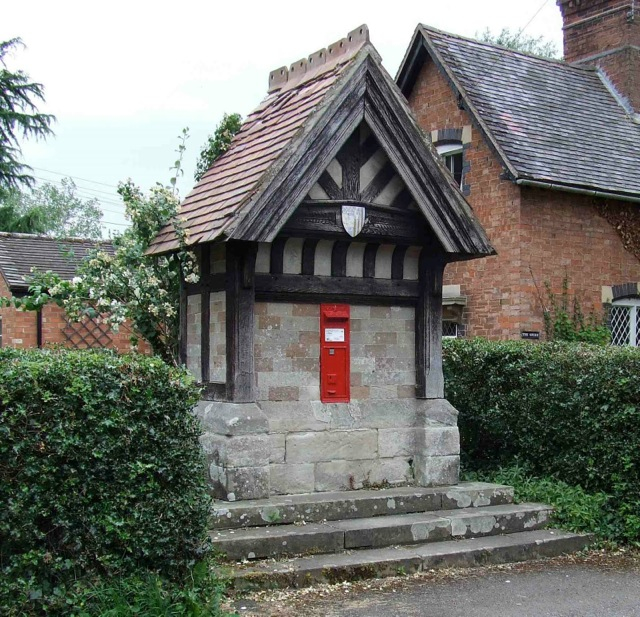 It was built because Rous Lench was a Victorian estate village, held by the Rous family, and then the Rouse Boughtons, from 1382 to 1876.
It was the last of the local Rouse Boughtons, Sir Charles Henry Rouse Boughton, who improved the village with a magnificent Gothic school and village hall, plus various cottages.
Then in 1876 he sold out to the Rev W K W Chafy Chafy, who made further improvements.
The letter box by the village green, set in sandstone with a timber-framed gable and the Chafy coat of arms, is one of his additions, celebrating the importance in the period of letters and their housing.
Rev Chafy’s letterbox sits well amongst the hedges, evergreens, and timbered buildings in this beautiful Worcestershire village. 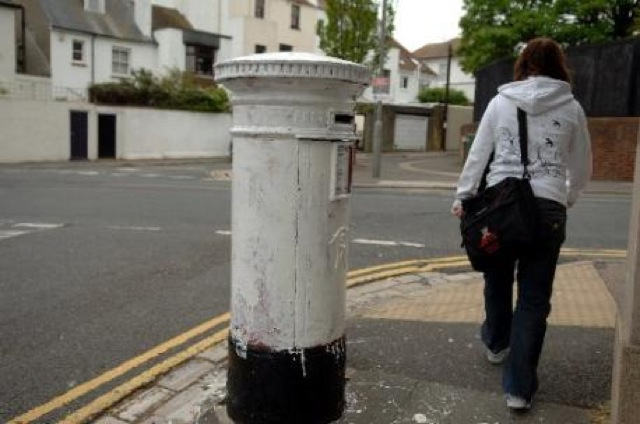 Seen in the Brighton Argus, May 2010:
"The familiar sight of the red post box has been given an unusual twist after vandals painted them white.
Six post boxes in the Seven Dials area of Brighton were covered in white paint in what would appear to be a co-ordinated attack.
While the motive is unknown, it is believed it could be aimed at Royal Mail as offensive remarks about the company were also discovered daubed in white paint.
Post boxes in Highdown Road, Lyndhurst Road, Melville Road, Leopold Road, Wilbury Crescent and Albert Road were all being repainted by Royal Mail Engineering and Construction staff yesterday.
The vandalism was first reported when Royal Mail staff went to empty them on their rounds." 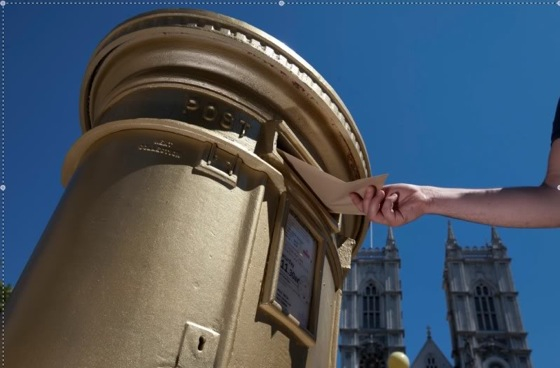 Sometimes they are GOLD!
Team GB's Olympic and Paralympic champions were rewarded with a post box to match the colour of their medals.
The Royal Mail transformed one post box from red to gold in the home town of each gold medallist.
The boxes - which will remain in use for posting letters - will stay gold for several months. 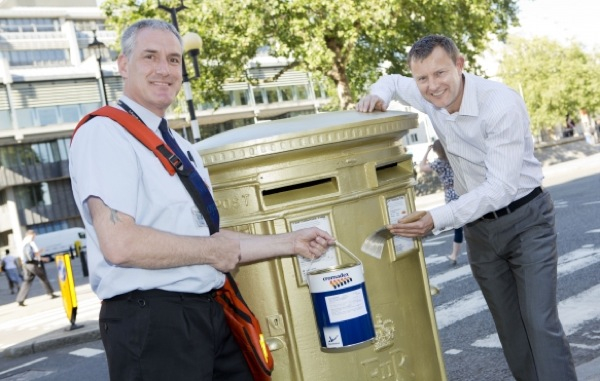 This unusual pillar box, made by Smith & Hawkes, perhaps explains why it is that pillar boxes are CALLED pillar boxes, because this one clearly believes that it really is a pillar, with its fluted, gently sloping sides.
Other features are the vertical rather than horizontal letter slot, and the door for emptying it sited on the opposite side from the slot.
In fact the door opens into the road, which must make the postman's job quite dangerous!
Post Office archives date this example from 1856/60. 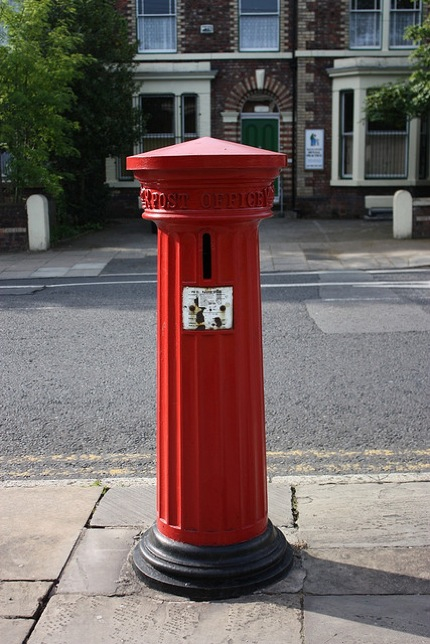 A model wooden post box which is part of the Bruce Castle postal history collection.
In the collection at Bruce Castle there is a poster that shows the development and variation of pillar boxes prior to the red design familiar to us.
Very early pillar boxes differed in two respects.
Firstly, they did not bear the monarch’s cipher, and secondly they were green in colour, making them less visible to passers by, resulting in a number of people walking into them!
This is a model of an 1857 pillar box, of which there are two slightly different copies.
The model is made of wood, is about 50cm high, has a slot for letters, and a plate with times and prices on it. 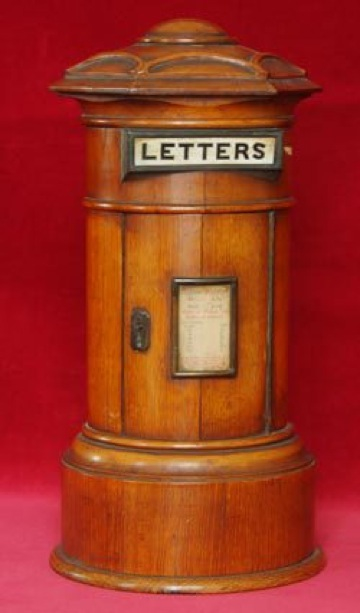 I am sure you can see why this is an unusual post box.
There are only about 150 of these in the country, two being in Leeds. 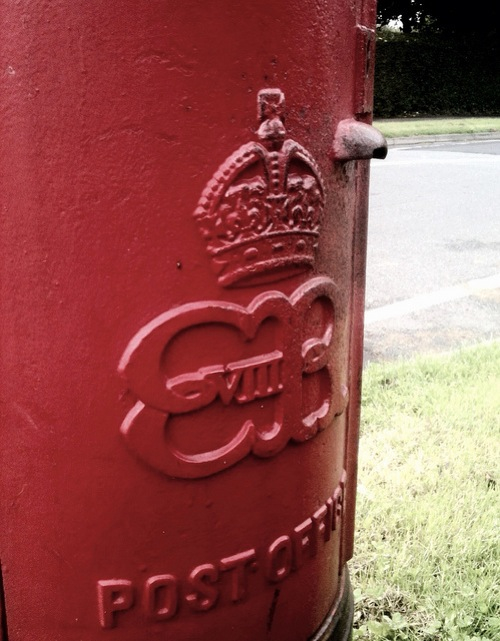 The Oldest Post Box in England?
Dorset,1985
It is really quite tiny....5 feet high.
Built by John M Butt and Co. of Gloucester in 1856.
It is unusual in having a vertical aperture.
The horizontal slot for letters was introduced as standard in 1859.
Located near Holwell, Dorset 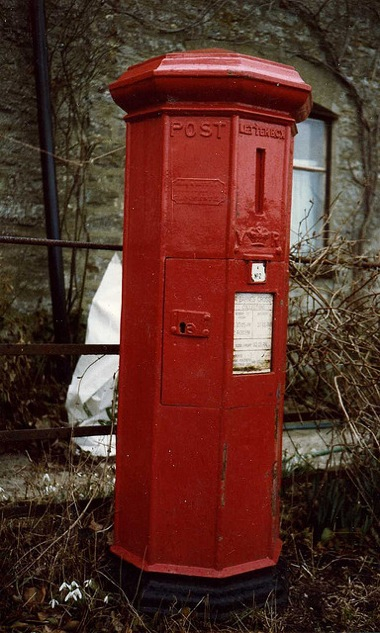 Liverpool Special post box
This is one of the original Liverpool "Special" posting boxes, cast in 1863 by Messrs.Cochrane & Company of Dudley.
The unique design was authorised and introduced to meet heavy and special posting requirements found in certain parts of this city.
It differed from the standard by the inclusion of the lettering "Post Office" below the posting aperture and a large crown on the roof.
A mail bag could also be hung inside. 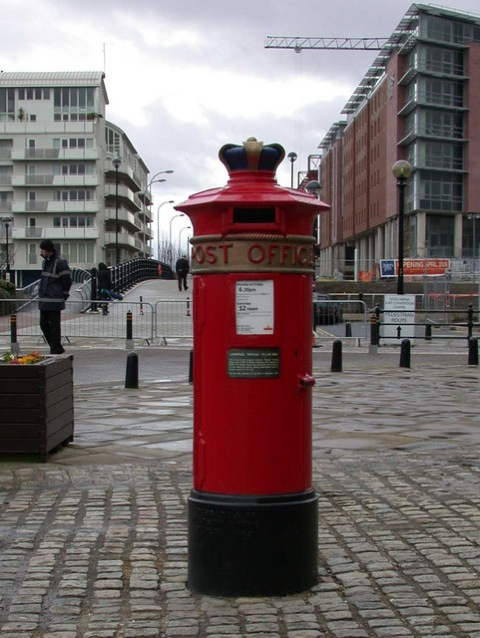 9 FROM THE MUSEUM
At The British Postal Museum Store - an amazing collection of standard and special post boxes (or letter boxes), dating from the time of Queen Victoria.
From this low angle you can see why they were called 'pillar boxes'.
On some old models, there is a substantial portion of the metal casting underground to make them secure. 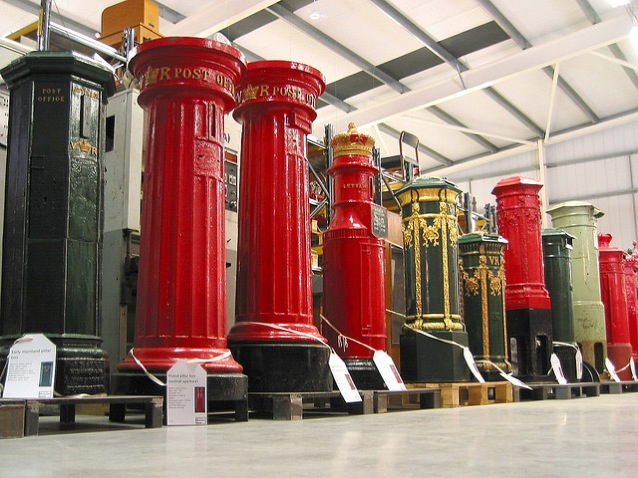 Post Office Heritage – A Restoration Project
The British Postal Museum and Archive take an active role in preserving our British Heritage.
One such project was the restoration of a now rare blue airmail pillar box from the 1930s.
Special post boxes for the collection of airmail were on British streets for less than nine years yet they continue to fascinate.
Originally intended to be placed in prominent positions in London, by 1936, there were 139 in London and 174 in the provinces.
Much of the interest in these boxes comes from the fact that they were painted BLUE. 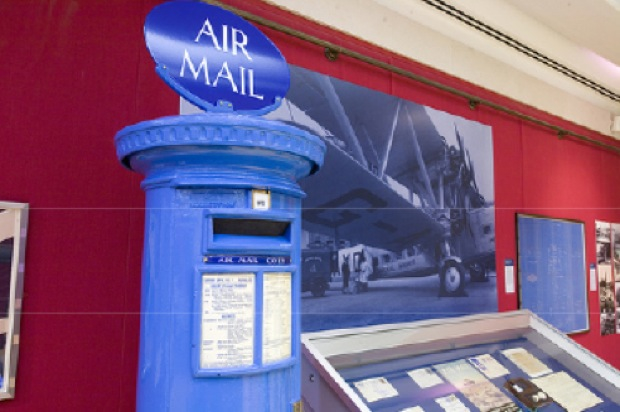 Stocksigns, based at Redhill were engaged for the work of replicating the airmail signs.
Founded in 1955, the company had purchased Burnham Signs (founded 1877) who, in turn, incorporated Garnier & Co. (established 1891).
Garnier had been the original supplier of the small airmail signs to the Post Office in the 1930s.
This commissioning was an attempt to preserve some continuity of provenance in the restoration.
Stocksigns was tasked with re-creating the oval and enamel airmail sign.
As the originals were in quite poor condition, it was decided to conserve these in an original condition as far as possible and commission replicas to be fixed to the restored box.
Restoration of the signs would have removed much that is original, and it is highly unlikely that more than a handful of original examples survive today.
Such a curatorial decision permits the original signs to be available for research in their original and preserved condition. 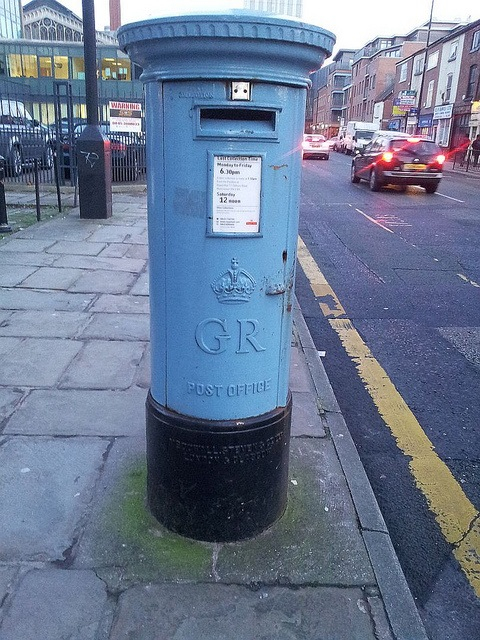 There are a few of the blue post boxes still to be spotted - keep your eyes open!
This was sent in by someone with sharp eyes...
"I for one had never come across a blue post box before today.
It's obviously quite old - the G R cipher denoting George V, grandfather of the present Queen.
It turns out that up until the outbreak of World War II in 1939 boxes painted in Air Force Blue were dedicated for letters to be sent by Airmail.
For whatever reason this one has survived." 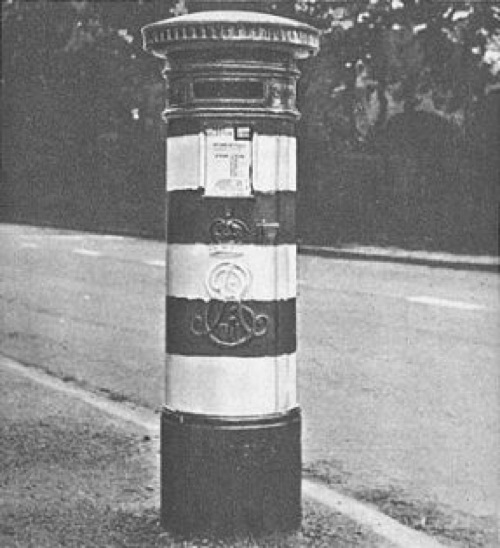 A degree of over-enthusiasm was exhibited in Oxton, Birkenhead in 1938 when the local A.R.P. employed workmen to paint certain obstacles with white lines.
The men painted a number of pillar boxes with three bands of white paint.
It was reported that the “rapidly promoted sergeants of the sidewalk soon lost their military status” and the boxes were quickly restored to their normal peacetime colour scheme!

12 A VICTORIAN BEAUTY
This box, first introduced in 1857, is highly ornate.
It was designed in collaboration with the Government's Department of Science and Arts in an attempt to make pillar boxes more attractive.
Fifty of these boxes were produced.
Manufactured by Smith and Hawkes, the earliest versions of these boxes, including this one, even incorporated a compass on top in case you got lost when posting your letter!
They were made a foot shorter than earlier boxes. As well as being used in London they were also sent to Dublin, Birmingham, Edinburgh and Manchester.

In the original design, the aperture was missed off this box and so was added later in the roof.
It was found that this positioning, however, meant a lot of rain water entered the box and so a flap was added to prevent this.
An economy version of this box was produced without all the elaborate mouldings for use outside the major cities.
< PrevNext >