AN AMAZING 14th CENTURY MAP OF BRITAIN
This is the oldest surviving map of Britain, dating from around 1360.
It is startlingly accurate.
Easily recognisable are the Severn, Thames and Humber, the loop of the Wear in Durham and the Thames estuary.

There are more than 600 cities, towns and villages, almost 200 rivers, and a rudimentary road network marked with thin red lines and extending to some 3,000 miles.
It shows countless hills, mountains, lakes and forests - New Forest and Sherwood - and even Hadrian's Wall, labelled with its popular name, murus pictorum, the Picts' Wall.
The map librarian at Oxford University's Bodleian Library, Nicholas Millea, highlights its significance.

"It is the first modern map of Britain and the oldest surviving map which shows the coastline in recognisable form.
All previous maps gave a theological interpretation, showing how Britain fitted into the Christian world.
The Hereford Mappa Mundi from approximately the same time has Jerusalem as the centre of the world.
Geography in earlier maps just wasn't important." 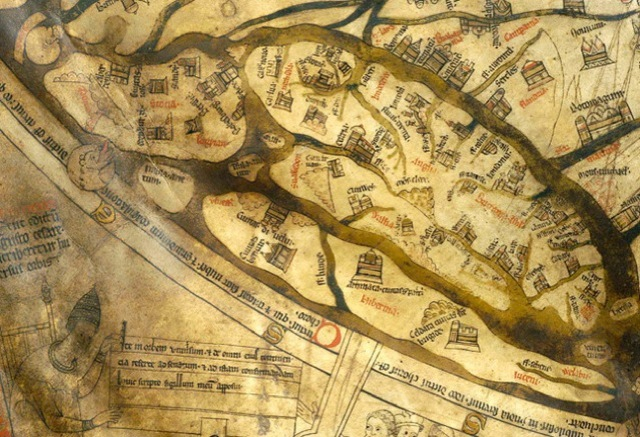 [Here are the British Isles on the Mappa Mundi].

A SIDEWAYS VIEW?
Named after topographer Richard Gough - who is thought to have bought it in 1774 for half-a-crown from the collection of the antiquarian "Honest Tom" Martin and bequeathed it to the Bodleian Library in 1809 - the Gough map is drawn in pen, ink and coloured washes on two skins of vellum and measures almost 4ft long by 2ft wide. 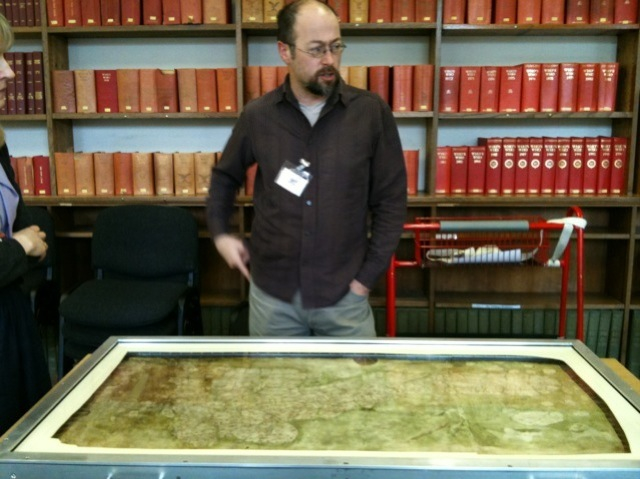 With its green rivers, red-roofed cathedrals, and extraordinary detail, it is surely one of the most aesthetically pleasing of our oldest maps.
Larger towns are shown in some detail, with London and York written in gold lettering and other principal settlements illustrated with symbolic images. 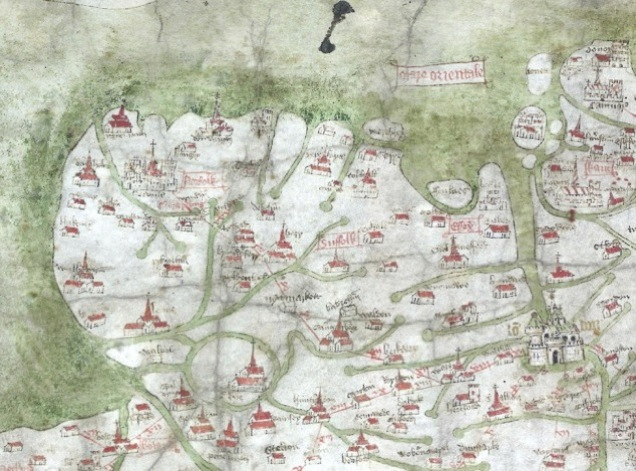 Can you see London?
It is remarkable for such detail and accuracy, but to modern eyes has surprising orientation.
It takes a SIDEWAYS view of Britain, because it was originally drafted to face east towards Jerusalem, as the centre of the Christian world, showing that the creators of the Gough map had not completely abandoned the early theological view of mapmaking.

The map is clear and brightly coloured, and shows rivers, towns, hills and coastline in considerable detail.

"There are 600-odd places and, if you compare it with a modern map, most of them are in pretty much the right spot," says Millea.
"We don't know whether they did the coastline first then filled in the interior, or whether it was done by word of mouth - a verbal map - so they put in London then worked outwards, adding places they knew."
Nick Crane, topographer and presenter of the TV series Map Man, thinks they may have used an astrolabe - a highly technical instrument used by classical astronomers, navigators and astrologers which involved checking the horizon, the stars, the sun and all sorts of angles. 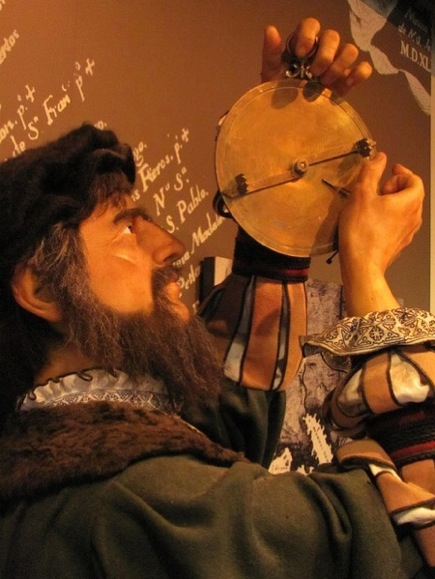 "This could be the beginning of mathematical map-making - some of the points of latitude have probably been measured through astronomy," he says.
The Gough Map was the first ever to show the road network of England, though there are some notable and surprising omissions, such as large sections of Watling Street.
For the first ever time it used numerals to indicate road distances in leagues; this is unique in comparison to all other pre-17th century maps of Britain, and really does make it the first known road map of Great Britain.
It was also the first map to depict a recognisably accurate picture of Britain's coast, although the accuracy is much greater in England than in Scotland, at that time part of another kingdom. 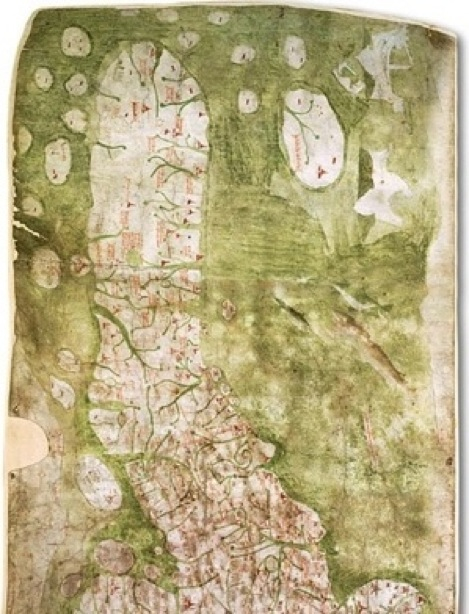 As you can see, Scotland is just a simple thumb-shape.
Apart from the Clyde and Forth and Edinburgh, the rest would appear to be guesswork.
Millea explains: "It was created at a time when Scotland was a foreign country and little was known about it so they improvised; that's why there are so few place names north of the border."

The map's authorship is unknown.
It is thought that much of the information about the map was gained from either one or more men who travelled around Great Britain as part of Edward I's military expeditions into Wales and Scotland.
The areas of the map's fringe with the most accurate detail often correspond with those areas in which Edward's troops were present.
The accuracy of the map in the South Yorkshire and Lincolnshire areas suggest that the author could be from this region.
However, it is also possible that the map was constructed based upon the collation of various people's local knowledge.
For example, the cartographic accuracy in Oxfordshire could be explained by the fact that William Rede, Fellow of Merton College, had successfully calculated the geographic coordinates for Oxford in 1340. 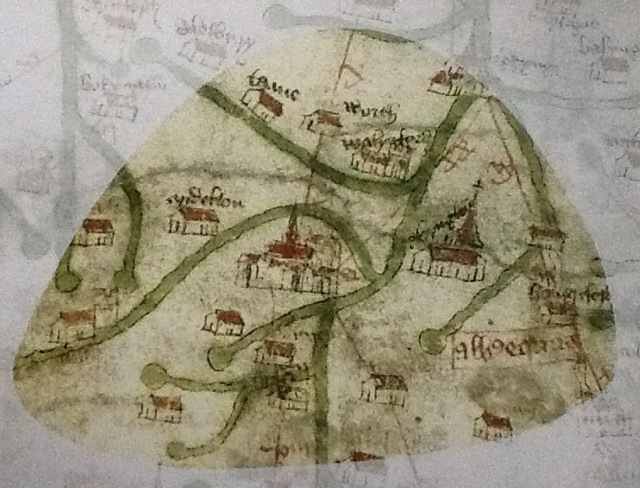 The Oxford area on the map

While the map in the Bodleian Library dates from the mid-14th century, experts think it was copied from an earlier map, from around 1280, which didn't survive.
Geographically, it fits in best with the time of Edward I.
All the castles of his conquest of Wales are there, and the few Scottish place names shown were known at the time of Edward I, but not much later. 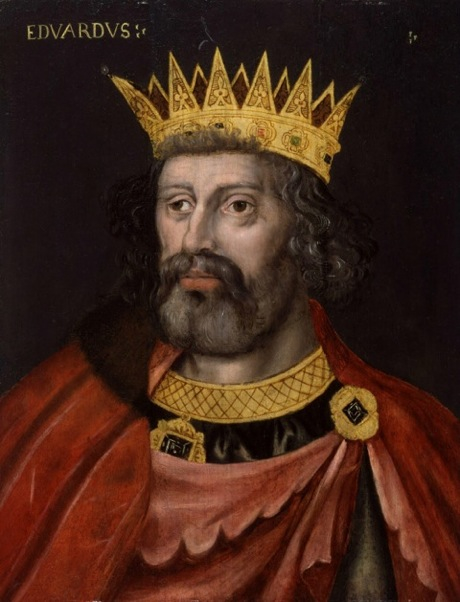 This may account for a few mistakes.
Cardigan Bay is missing.
Cornwall extends too far west, Orkney is too large and Dartmouth and part of central Wales are shown as lakes rather than upland areas.
Lewes in Sussex is put in twice.

But regardless of these errors, the Gough map represents a massive leap forward from earlier maps.
As well as showing the geography, it gives an idea of the development of several places in England and Wales at the time.
Some towns, such as Blakeney in Norfolk which was once a thriving port, are now tiny settlements compared with their apparent importance in the 14th century.
In contrast Manchester appears to be no bigger than Charlesworth, a little village in the Peak District.

I was interested to see that the rivers all begin with a round blob, which represents a lake, because it was believed at the time that all rivers originated from lakes.

Cities and towns are made up of a number of symbols according to their importance.
All the roofs are painted red.
There are four basic groups of symbols representing settlements: houses, towns with and without walls, cathedral cities and monasteries with crossed spires and castles with towers and/or crenellations.

Hadrians wall is portrayed as a castellated red line which cuts straight across from east to west.
The map contains numerous references to mythology as if they were geographical fact, as illustrated by comments about Brutus' mythical landings in Devon.
Nevertheless, it remains the most accurate map of Britain prior to the 16th century.
The Gough map is one of this country's most important historical documents - it formed the basis for almost all the maps of Britain for 200 years. 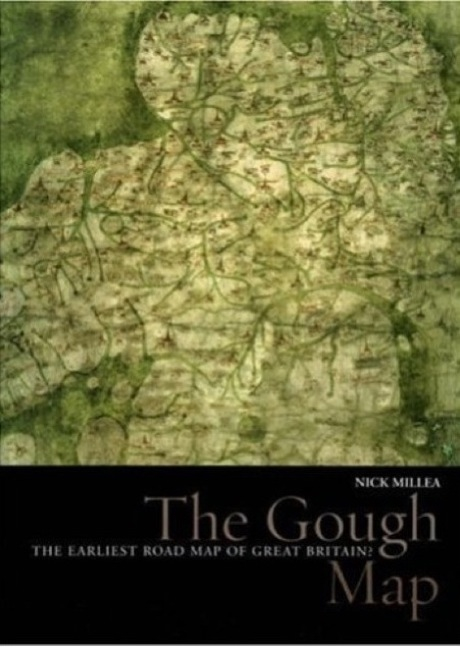 There is an excellent book, "the Gough Map: the earliest road map of Great Britain", which contains a fold-out copy of the map and was written by Nick Millea.
Needless to say, I had to add it to my collection!
< PrevNext >

#1 Michael Wear 2013-02-24 23:15
Very interesting thank you for sharing it and giving me your website in church
Refresh comments list