Not all maps are created to serve a wholly geographical purpose.
They come in many different forms, from many different areas of exploration: there are satirical, literary, historical, political, allegorical, anatomical and phrenological maps, and more!

I enjoy looking at books of maps as I enjoy looking at cookery books or dictionaries, dipping in and out and bringing up all kinds of treasures.
Recently I have acquired a few fascinating books about unusual maps, and in this article I hope to share some of my favourite discoveries.

1 LOOK TWICE AT THESE!

Simon Patterson’s The Great Bear: a Map of Stars

In this artwork, produced in 1992, Patterson doesn’t change any of the map’s original design features at all.
It is a lithograph, an adaptation of the official map of the London Underground.
The colours all remain the same, the circle icons representing the stations are all intact and the fonts are all unchanged. 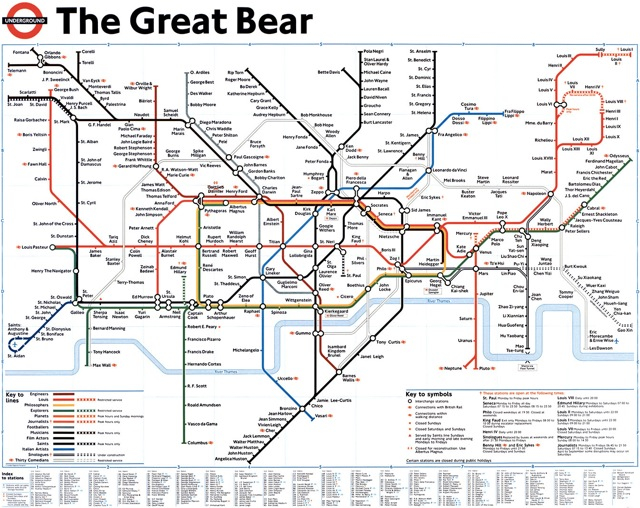 What he does is simply change the stations’ names, doing it Tube line-by-Tube line, replacing them with the names of great actors, philosophers, saints, scientists, people infact who were stars in their time.
Each group of specialists has its own tube line. 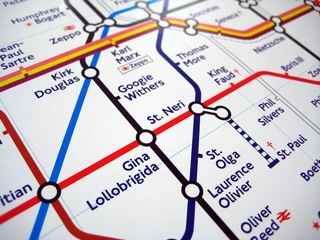 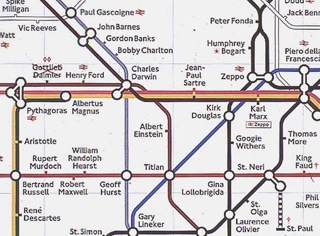 The title The Great Bear refers to the constellation Ursa Major, a punning reference to Patterson’s own arrangement of “stars”.
Patterson playfully subverts our belief that maps and diagrams provide a reliable source of information.
“I like disrupting something people take as read”, he comments.

Here is another special map art piece modelled after the above example.
This is a fairly recent publicity tool produced by Stratford-on-Avon’s world famous Royal Shakespeare Company. 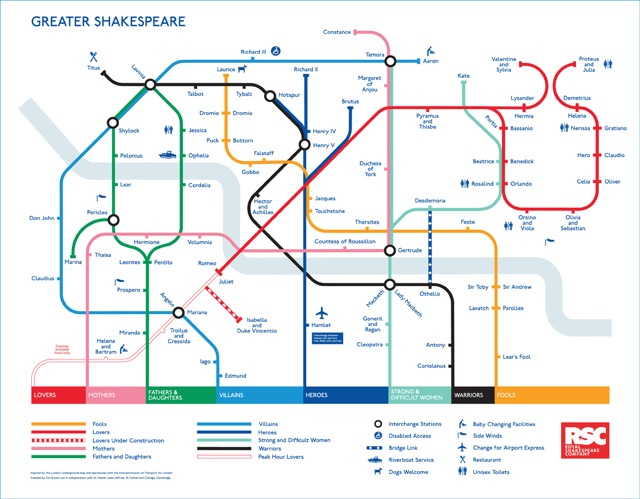 It was designed as a humorous and very accessible PR exercise for their theatrical efforts and the genius of the great writer himself, and like Patterson's work has retained the contours and colours, lines and fonts of the London Underground Map.
Great stuff!

This early map was drawn by the German theologian Heinrich Bunting,of Hanover.
It was not intended to be physically accurate, and first appeared in his biblical commentary, Sacrae Scripturae.
In his map of the world as a clover leaf, representing the Trinity, each of the three continents of the Old World forms a section, with Jerusalem in a circle in the centre.
England and Scandinavia appear separately at the northern edge of the map, and the new continent of America can be seen in the lower left corner.
It has been suggested that the cloverleaf design represents not only the Trinity, but the arms of Bunting's native city of Hanover. 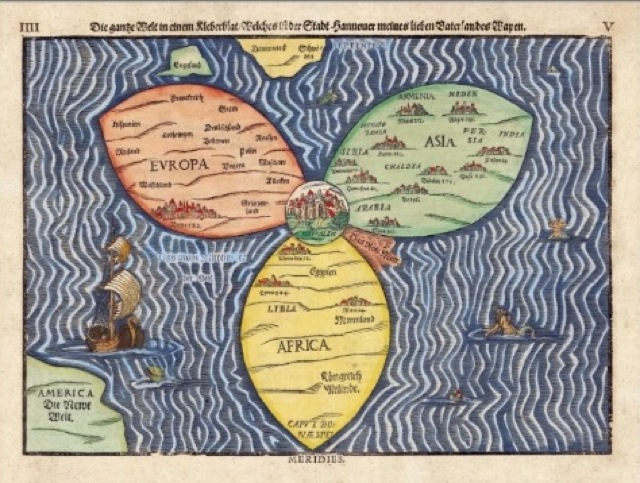 The cloverleaf pattern was shared by Hanover, and appears in the city coat of arms.

Jerusalem is placed in the centre of the world,because of its spiritual significance.
Middle Eastern cities of biblical antiquity are portrayed in most detail.
The three leaves of the clover, the continents of Asia, Africa and Europe, issue from the Holy City.
Recently discovered, America, Die Neue Welt, has been added, but is marginalised.
Philosophers would have understood that the central position of Jerusalem acknowledged its abiding spiritual position in the world. 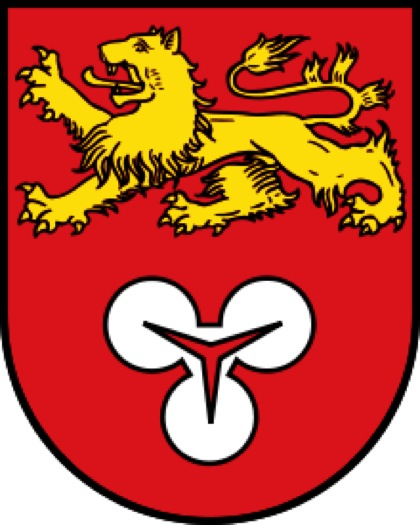 "The whole world in a clover leaf, which is the crest of the city of Hannover, my beloved fatherland," was the caption chosen by Bunting.
The blue ocean is called "The Great Mediterranean Sea of the World," and only the Red Sea is coloured red and shown separately.
For many hundreds of years maps placed Jerusalem in prime position in maps of the known world.

This is a map of the meander belt of the great Missouri river.
The Missouri was originally a shallow, muddy, turbulent waterway, winding and weaving over a wide floodplain.
It moved across an area called the "meander belt," which occupied about a quarter of the floodplain.
This map shows the changing patterns of river movement over time. 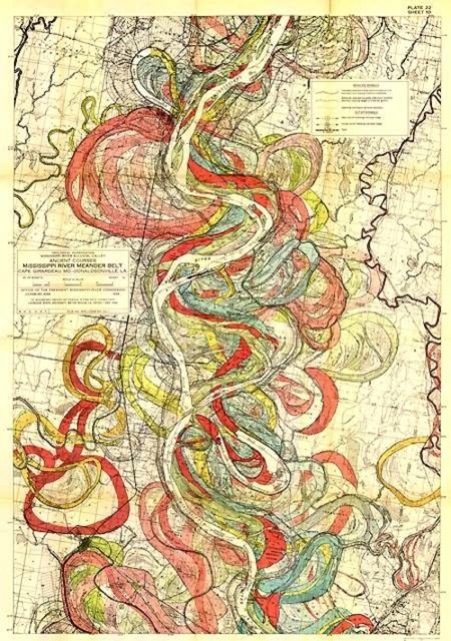 This meander belt provides shallow water habitats which are vital for the fish and wildlife of the Missouri.
In late summer and fall, 98% of the Missouri was less than 10 feet deep.
In fact, the wetlands, which occupied less than 10% of the surface area between the normal high water points of the river, were home to more than 90% of the fish community.
What a beautiful picture this map makes!

A map of Ireland by artist William Harvey (1796 - 1873).
"Ireland" by William Harvey was published by Hodder &Stoughton in 1869's "Geographical Fun, or Humorous Outlines of Various Countries."
The author created a series of twelve maps showing various countries as curious people in the great tradition of English caricaturists.
Harvey states in the introduction: "It is believed that illustrations of Geography may be rendered educational, and prove of service to young scholars who commonly think Globes and Maps but wearisome aids to knowledge."
The maps and rhymes were thus, perhaps, designed to amuse children and to teach some basic geographical concepts, rather than as political satires, although maps have always been good visual aids for political cartoons. 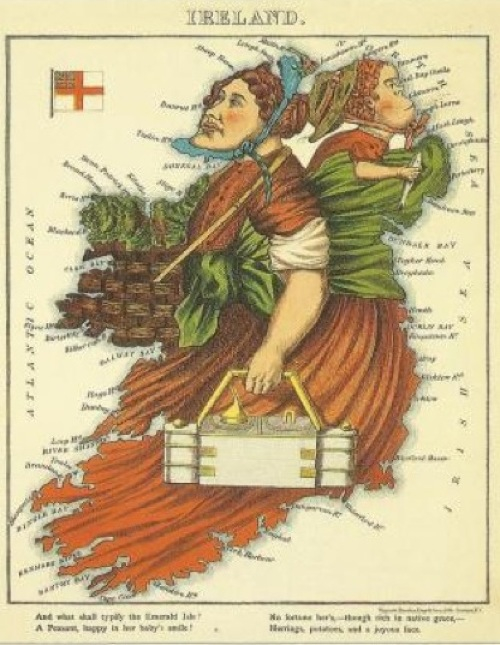 Underneath we read:
"And what shall typify the Emerald Isle?
A Peasant, happy in her baby's smile?
No fortune her's - though rich in native grace,
- Herrings, potatoes, and a joyous face."
The descriptive rhymes for "Geographical Fun" were written by Aleph [the pseudonym of William Harvey.]
The idea behind the maps is said to have been taken from sketches drawn by Lillian Lancaster, a 15-year old girl born in 1852 in London and who was trying to amuse her sick brother confined to bed.
She later became an accomplished comic actress and singer.
Lillian married and in later life lived in Brighton, England.
She died in 1939 at the age of 87.
There are a number of "People Maps" of the period, some more political than others.
They are highly colourful and attractive, I think.
Here is a good one. 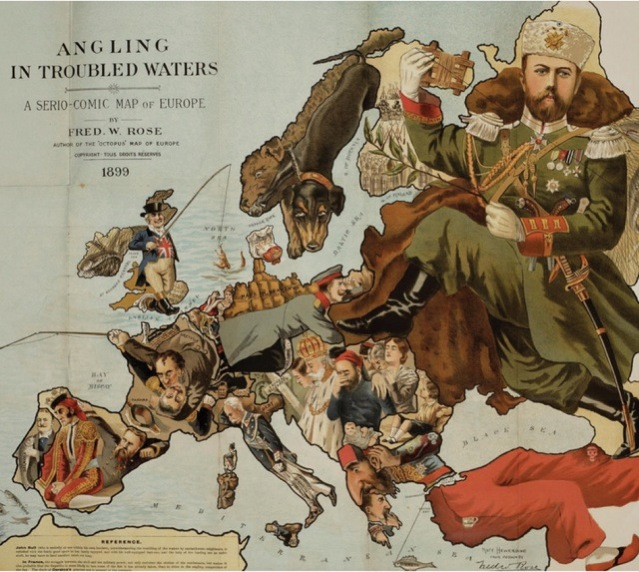 5 MAPS IN STONE AND POTTERY

This rock is a petroglyph in an archaeological park in Idaho.
It is thought to be a map of the Upper Snake River and its surroundings. 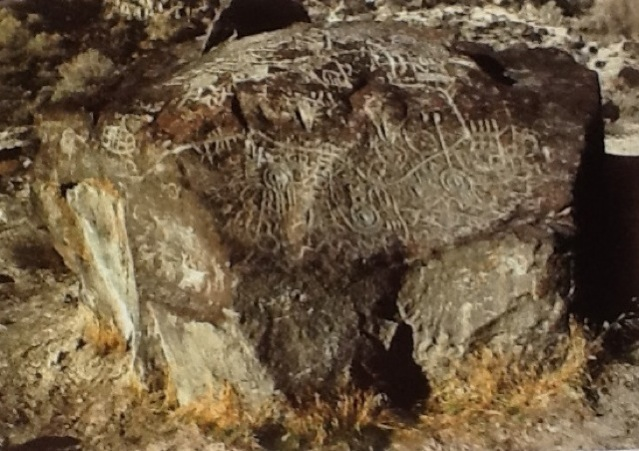 The "trail map" and "heart map" below were found by a holiday-maker in Arizona, who was climbing in the Superstition Mountains.
Placed side by side, they are said to lead the way to boundless riches.
So far, no news of the treasure...... 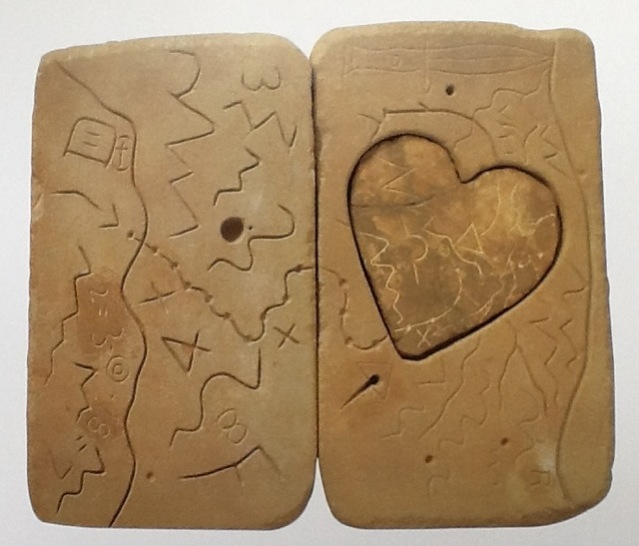 Here is a delightful chart of a young child's daily routine.
It is beautiful, with its bright colours and simple structure.
I am tempted to make a map of an old lady's day!

7 A STREET MAP IN CANVAS AND KAPOK: MANHATTAN This is a work of art from the Pop Art Movement of the 1960s and 1970s. It is called 'Soft Manhattan,' and shows the street pattern of the city.
The artist, Claes Oldenburg, has produced a similar 'sculpture' of the New York subway system.

8 MAPS OF LOVE AND MARRIAGE

Over some hundreds of years a large number of maps have been produced, sometimes in the form of board games, on the subject of the journey through romantic relationships.
In 1777, J.G.I.Breitkopf published this map, Das Reich der Liebe, with a brief explanatory text.
The pilgrim sets out from the Land of Youth, and may travel through a number of other lands, including the Desert of Melancholy, the Land of Unhappy Love, and the Land of Desires. 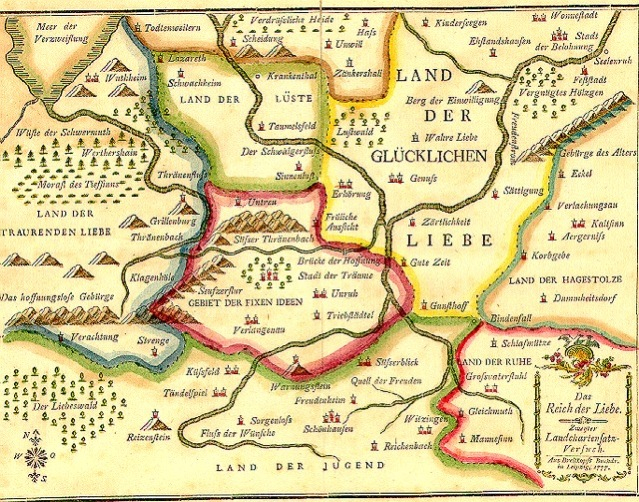 My favourite love maps are these.
They were inspired by two Victorian lithographs, author unknown.
The titles are rather daunting: "Geographical Guide to a Man's Heart with Obstacles and Entrances Clearly Marked" 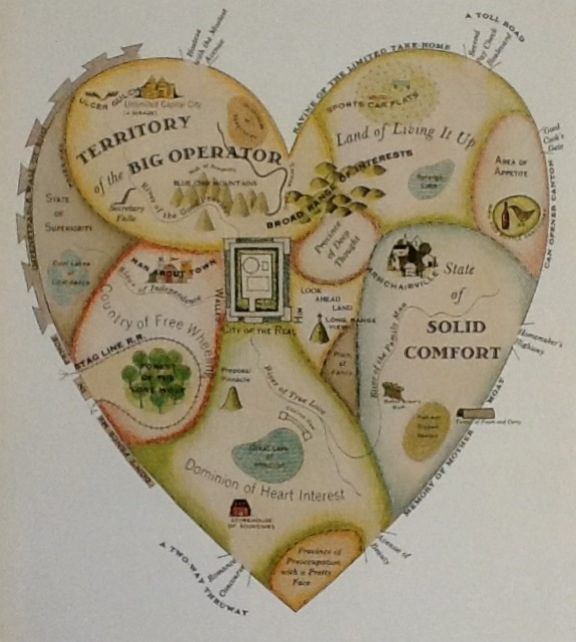 and for the lady: "Geographical Guide to a Woman's Heart Emphasizing Points of Interest to the Romantic Traveller." 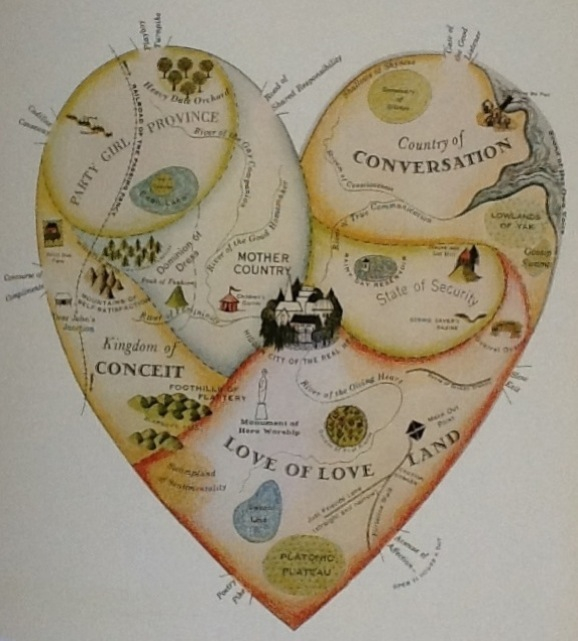 They were published in McCall's Magazine in 1960.

9 MAP OF A PERFECT PLACE?

This is a map of Utopia, the imaginary society invented by Sir Thomas More.
He wrote the book in 1516 and it sold very well.
I find it tedious reading.
It was his idea of a perfect way of communal living.
To my mind, it would be very dull and bound by rules and expectations.
More like a prison or an institution, with no individuality and not much fun! 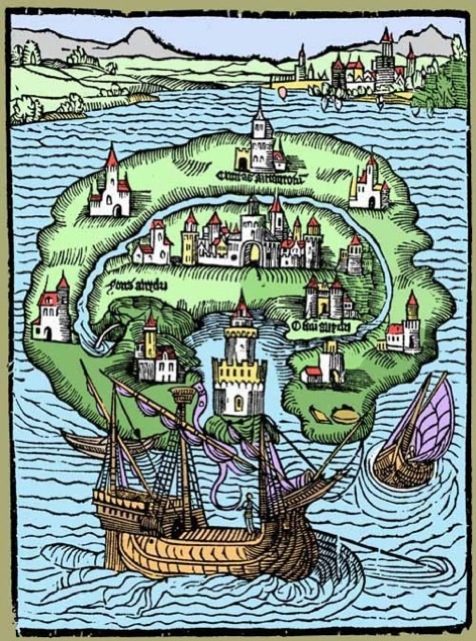 For example, Utopia did not permit private ownership.
Houses were rotated between the citizens by lot every ten years.
Everyone went to bed at eight and had eight hours' sleep.
Every Utopian had to live in the countryside and practise farming for two-year periods.
All the people wore the same simple clothes.
Every citizen had to learn an essential trade.
Ruling officials were selected in childhood for their ability to learn.
Gold was the wealth of the country, and was used for prisoners' chains or other shameful things like chamber-pots, to make sure the people disliked it.
Meals were eaten in community dining halls, and each family in turn cooked for all the rest.
All able-bodied citizens had to work for six hours every day.
All citizens were encouraged to apply themselves to learning in their leisure time.

Certainly not an attractive way of life, it seems to me!

10 MAPPING YOUR CHARACTER: PHRENOLOGY
Phrenology was a popular science in the nineteenth century, particularly from 1810 to 1840.
Phrenologists believed that the human mind has a set of different mental faculties, with each particular faculty represented in a different area of the brain.
For example, the faculty of "philoprogenitiveness", from the Greek for "love of offspring", was located centrally at the back of the head. 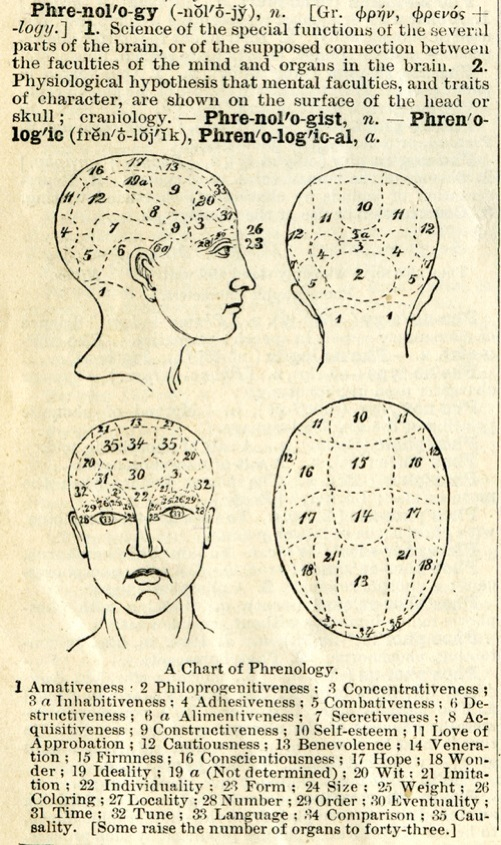 Different areas of the brain were said to be proportional to a person's propensities.
The importance of an organ was derived from relative size compared to other organs.
It was believed that the cranial bone adjusted and grew in order to accommodate the different sizes of these particular areas of the brain in different individuals, so that a person's capacity for a given personality trait could be determined simply by measuring the area of the skull that overlies the corresponding area of the brain.

In 1809 the German physician Franz Joseph Gall began writing his greatest work "The Anatomy and Physiology of the Nervous System in General, and of the Brain in Particular, with Observations upon the possibility of ascertaining the several Intellectual and Moral Dispositions of Man and Animal, by the configuration of their Heads." 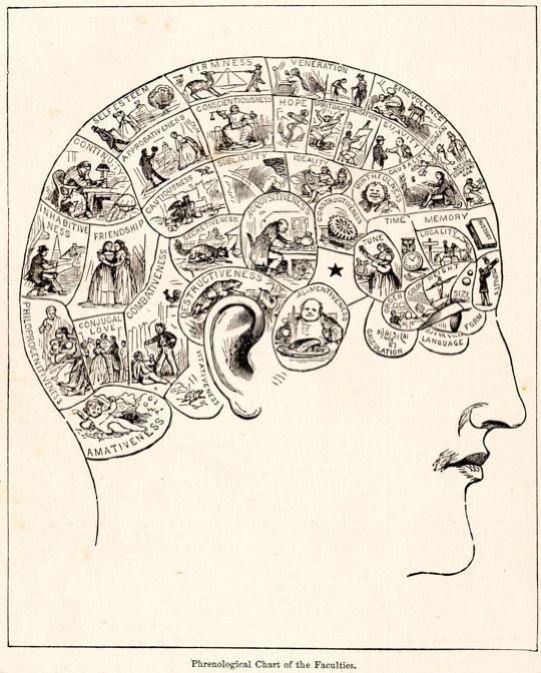 In the introduction to this main work, Gall makes the following statement in regard to his doctrinal principles, which comprise the intellectual basis of phrenology:
The Brain is the organ of the mind
The brain is not a homogenous unity, but an aggregate of mental organs with specific functions
The cerebral organs are topographically localized
Other things being equal, the relative size of any particular mental organ is indicative of the power or strength of that organ
Since the skull ossifies over the brain during infant development, external craniological means could be used to diagnose the internal states of the mental characters
Through careful observation and extensive experimentation, Gall believed he had established a relationship between aspects of character, called faculties, to precise organs in the brain. 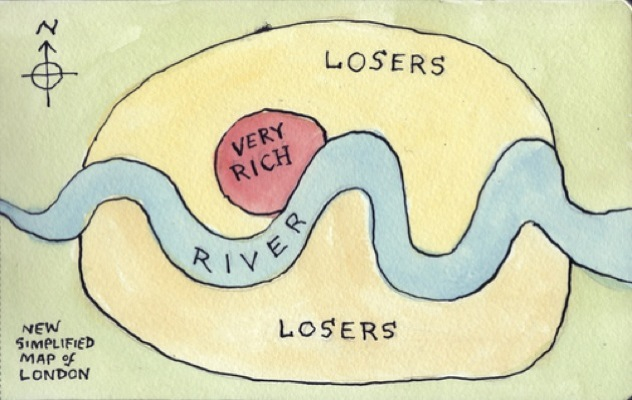 I have many more maps to share- more articles will follow!
(By the way, I live among the Losers!)
Next >