Tipping Cows - is this for Real?

[First, an odd thought.
I have read that cows can sleep standing up, but they can only dream lying down.
BUT: how do people know when a cow is dreaming?]

Have you ever heard of "tipping cows?"

I once read an article on the internet which purported to be by an ex-country boy who found it fun in his teenage years....

He described how he and his friends would first PAINT the chosen cow a bluish purple so that their target could be identified later. 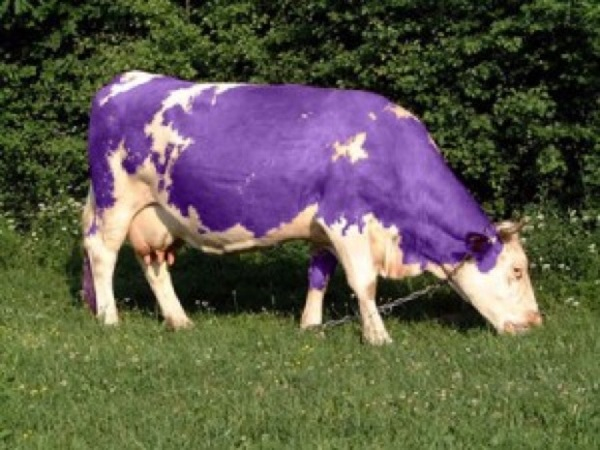 Apparently they did not have any difficulty, and while they were painting did not wake up the sleeping cow(!!!)

Two of the group, one an experienced tipper, would then slowly and steadily push the (still sleeping) cow until she fell, without resistance because (as the young man assures us):
"cows, when sleeping, can lock their knees so they don’t fall over, but the locked knees make tipping possible because they can’t react quickly as they are falling over."
He goes on to say: "The poor old cow would hit the ground with a thump, startling her awake.
She would then moo, struggle to her feet and take off at a fast run.
We always tried to choose a cow on the periphery of the herd so she wouldn’t startle the others and start a stampede.
If we were careful and quiet we could tip two or three cows on cow tipping night."

What do you make of this?
A few questions remain.
Why were the rest of the herd undisturbed by teenagers painting one of their group? 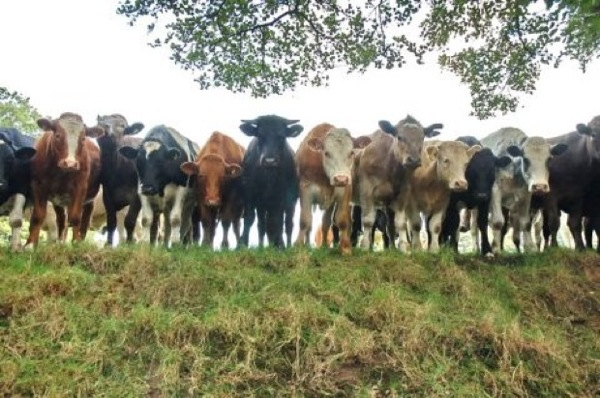 Most cows are curious and tend to investigate any disturbance of routine.
And they gather protectively and stare!

Cows can, in fact, be dangerous.
Farmers will tell you that it is inadvisable to cross a field where many cows are grazing, especially if you have a dog with you, as cows are very protective of their young and have been known to trample and head-butt trespassers.

This is from the Independent in 2009, a particularly unfortunate year for ramblers.
"Four people have been trampled to death by cows in just over eight weeks this summer, prompting British farmers and the Ramblers Association to warn yesterday of the potential dangers.
Cows have been thought to be generally docile, and this remains true, the National Farmers' Union emphasised yesterday.
However, the NFU pointed to the fact that at least two of the four deaths involved walkers with dogs, which may be a factor in turning cows from placid cud-chewing bystanders into potential killers.

"Cows can get aggressive in the presence of dogs, especially if they have their calves with them," Robert Sheasby, the NFU's rural surveyor, said yesterday.
"They see the dog as a threat, and take exception to it.
Cows are generally placid and docile, but when a mother animal feels the protection of her offspring is at risk, temperaments can change." 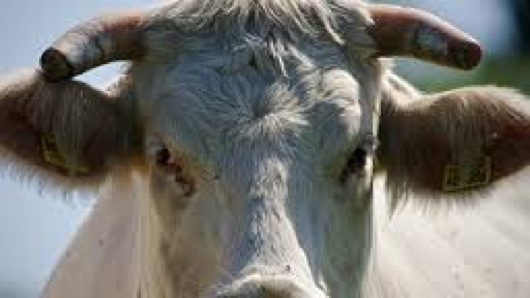 The first of this particular summer's fatal incidents seems to have conformed to that pattern: it occurred on 21 June in the Yorkshire Dales when a veterinary surgeon from Warrington in Cheshire, Liz Crowsley, was walking along the Pennine Way near Hawes with her two dogs, a spaniel and a collie.
She was found dead, having apparently been trapped against a wall and then trampled.
Police speculated that Ms Crowsley's dogs may have sparked the attack.
In what may have been a similar incident, 63-year-old Anita Hinchey was trampled to death on 18 July when walking her dog in a field on the outskirts of Cardiff.
Three days earlier, 65-year-old Barry Pilgrim was killed when walking with his wife in the countryside near Sheldon in Derbyshire.
It is believed Mr Pilgrim did not have a dog with him, but he was attacked by cows who were accompanied by their calves.

This summer's fourth fatal incident occurred on 11 August, when a 75-year-old farmer, Harold Lee from Burtle in Somerset, was trampled and killed by his own herd.
It is thought the animals may have been frightened by a passing fire engine.
This total of four deaths, in such a short time, has caused concern.
"It's certainly something we're not used to seeing.
This year has been very unusual," Mr Sheasby said.
"It is very unfortunate that three walkers can be killed in the space of a few weeks, and we would hope that this is an unfortunate coincidence."

There are about 7.5 million cows in the fields of Britain, who share the landscape with millions of rambling Britons in the summer.
No one knows just how many walkers are out on a given day, but the numbers are clearly very high – each of Britain's 18 national parks will chalk up between 20 and 40 million day visits every year.
As a fully-grown cow can weigh anything from three-quarters of a tonne to a tonne, it does not take much for serious injury to be inflicted on anyone unfortunate enough to be on the end of a sudden bout of bovine bad temper. 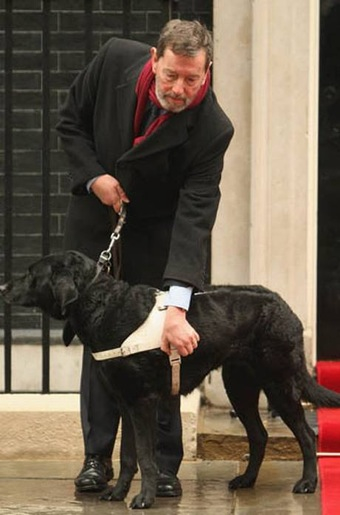 Someone who can testify to this painful truth is David Blunkett, the former Home Secretary, who was attacked by a cow while walking in the Peak District on 6 June, his 62nd birthday, and suffered bruising and a broken rib.
Once again, a dog was involved – in this case, the blind MP's trusted guide dog, Sadie.
The photo was taken on the day they returned to parliament after the incident.

The NFU joined with the Ramblers yesterday in offering a key piece of advice: if you feel menaced by cows when you have a dog with you, let it go, as it may well be the dog that is causing the problem.
"Your dog will outrun the cattle and you can then make your own way to safety," Mr Sheasby said.
"At most times it is important to keep your dog on a lead in the countryside, but if you feel under threat because of it, let it go and put it back on its lead later."

Cows are not generally dangerous, he added.
"They are naturally curious, rather than naturally aggressive, as well as short-sighted, and they will often come right up to you just to see who is in the field with them."
But it was important, he said, not to let your dog get between a cow and its calf.

At least 22 people are killed in the U.S. every year from these seemingly docile creatures.
They're fun to pet, but getting kicked in the head by one is certainly not fun!

This is the moment a herd of cows turned on a young black bear after it attempted to make a meal of a grazing calf. 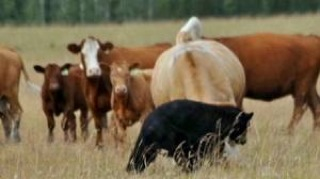 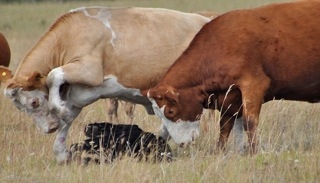 The bear had spotted the calf separated from the group of cows on a 2,200 acre ranch in British Columbia, Canada.
But it got more than it bargained for as the mother of the calf and two other cows charged the creature in a bloody battle lasting five minutes.
The bear escaped, injured but with alive, after three attempts ........

Now, as to cow tipping: Personally, I would never attempt to paint a cow blue!
Or to push one over!
Was this chosen cow so deeply asleep that she didnt feel or smell or hear anything?
Was the village policeman sick or on holiday?

Where is the fun in treating an animal with such lack of respect? 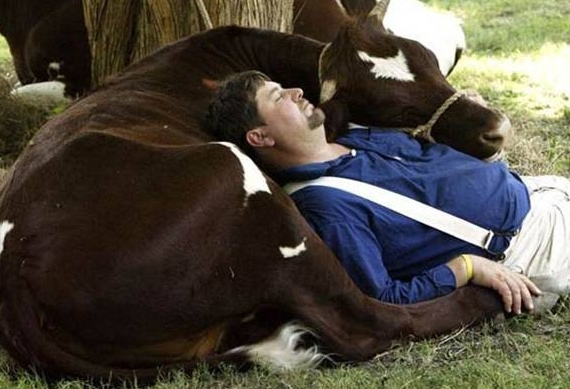