How to Make a Barometer

When I was a little girl, cigarette packets usually contained picture cards.
Expensive cigarette packets even held the coveted 'silks', embroidered or printed with flowers or national flags.
Once I found one of these, a beautiful deep blue gentian on cream silk, in an empty cigarette box someone had thrown down in the street.
What treasure! 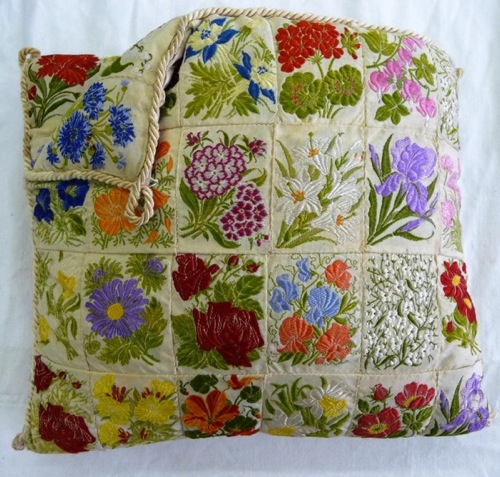 Here is a cushion cover made from some of the flower 'silks.'
They were in Kensitas packets, and really were beautiful, as you can see....
We were forbidden to speak to strangers, but most children ignored this rule as far as cigarette cards were concerned.
Any adult opening a cigarette packet would expect to be approached by a child asking for the card within.
There were cards included in tea and chocolate products, too.
The albums could be purchased for a few pence in the grocers or sweetshop.
Most of the cards were educational and there were 50 or so to each theme: during the war there were air raid precautions, I remember. 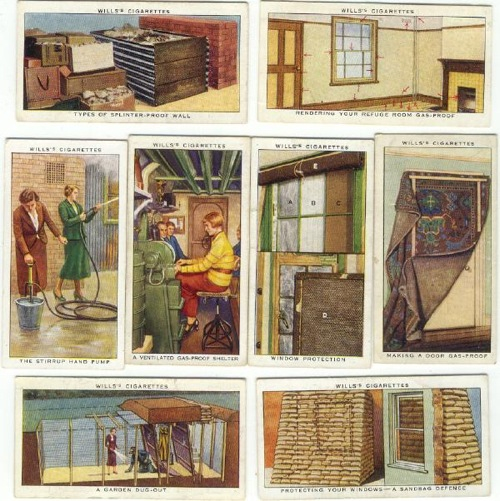 There were sets of cards about the history of fashion, about wild animals, about sport and inventions.
Each complete album made a little encyclopaedia, full of information.
The cards were very colourful, and as a child I found them fascinating. Here is a set of flags( a popular subject.) 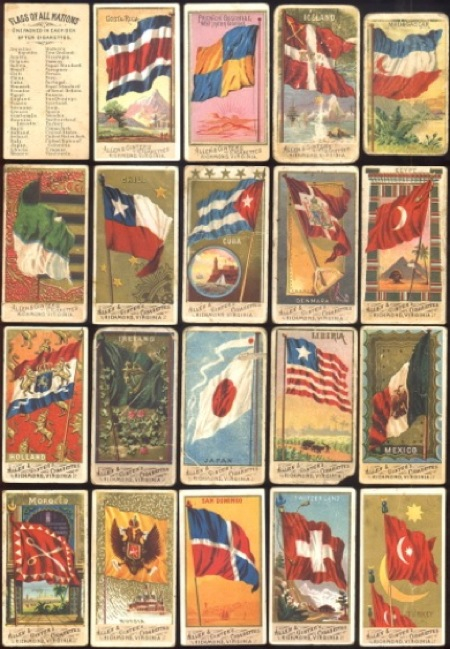 One of the sets was called "Household Hints," and contained all kinds of practical advice, from how to clean an oil-painting to whitening a ceiling or making a broom-rack.
Card No.1 was about making a barometer.
The picture was on the front. 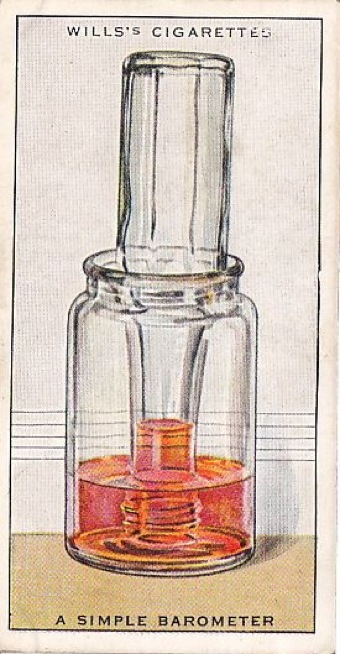 Instructions were on the back, as follows:

Here is a simple barometer that a child can make.
All that is required is an empty vinegar-bottle, an empty glass jam-jar and water coloured with red ink.
Half-fill the bottle with the coloured water, and place the jar upside-down over the bottle.
Now reverse, so that the jar is standing upright, with the bottle standing in it upside-down.
Allow the coloured water to flow into the jar until the level of the water in the bottle is about an inch or two above that in the jar.
By the rise and fall of the water in the neck, the weather may be fairly accurately foretold.
Fine weather will casue it to rise, while a drop may presage rain or rough weather.
A ruled card fixed behind the jar enables the rise or fall to be seen more easily.

Beneath the instructions we read:
ISSUED BY THE IMPERIAL TOBACCO CO. ( OF GREAT BRITAIN & IRELAND ), LTD.
ALBUMS FOR WILLS’S PICTURE CARDS CAN BE OBTAINED FROM TOBACCONISTS AT ONE PENNY EACH.

What a bargain!
And the cards were free!
(Even if it took many months of heavy smoking to collect a complete set.) 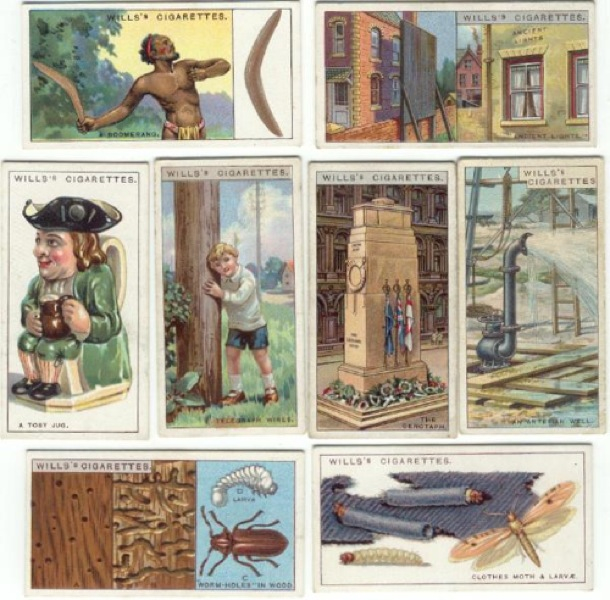