Bee bearding is the practice of wearing several hundred thousand honey bees on the face, usually as a sideshow demonstration at agricultural shows.
Hive bees are attracted into position by a queen in a small cage worn under the chin.
Personally, I do not find the idea in any way attractive!

Though beekeepers since ancient times have allowed bees to rest on their bodies in order to demonstrate their rapport with the insects, the practice of congregating measurable quantities of bees on the face was initiated by Petro Prokopovych, a Ukrainian beekeeper, in the 1830s.
The practice spread to various "freak" exhibitions at American carnivals by the end of the nineteenth century. 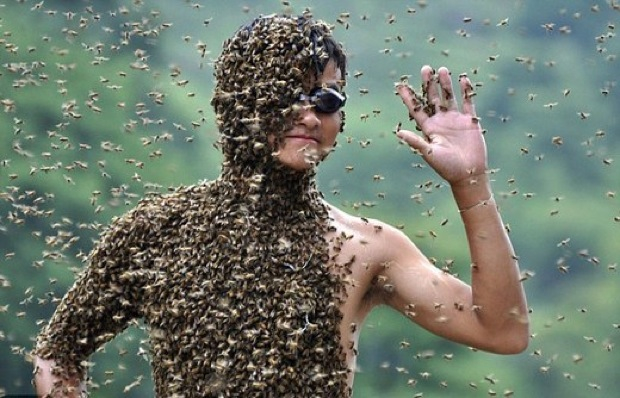 Nowadays, the Guinness Book of Records includes a category for "most pounds of bees worn on the body," which is currently held by American animal trainer Mark Biancaniello.
Biancaniello successfully wore 350,000 bees, weighing just over 87 pounds, during a 1998 broadcast of the Guinness World Records Primetime television show.
A 2005 attempt to break the record by Irish beekeeper Philip McCabe, who was to wear a full one hundred pounds of bees, failed when only 60 pounds of bees landed on his body.
McCabe was using Irish black bees, which are larger than Italian honey bees, so fewer bees (around 300,000) would have been required to reach 100 pounds than it took Biancaniello to reach 87 pounds.
Bee bearding records are calculated by weight, not number of bees, because of this variation across honey bee strains. 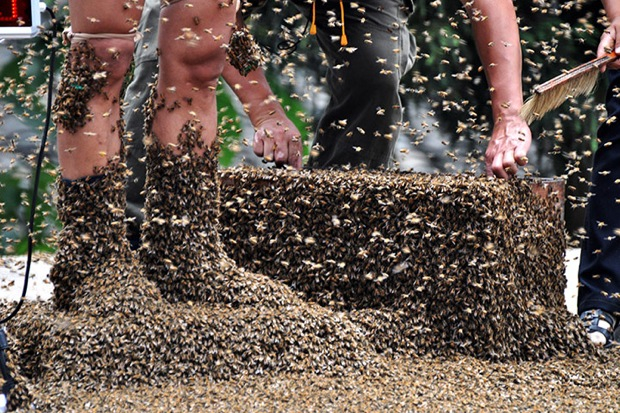 Due to ever-increasing competition to break the record, most advanced attempts at bee bearding now involve bees covering the entire face, torso, back, and arms of the participant in order to provide sufficient surface area for over eighty pounds of bees to land.
Nevertheless, the name "bee bearding" is still used.

CHINESE BEE-WEARING
In 2009, couple Li Wenhua and Yan Hongxia of Ning'an, China, both beekeepers, married while both were covered in bees.

Two fearless bee keepers - Lu Kongjiang and Wang Dalin – went head-to-head in China's Hunan province to find out who can attract the most bees.
Wearing just a pair of shorts and with the help of a queen bee, Mr Wang tipped the scales with 26kg worth of bees in an hour.
And the 'sting in the tail' for Lu Kongjiang was that he only managed to attract a swarm of just under 23kg.
So close, yet so far away!
But both Wang Dalin and Lu Kongjiang have a way to go before they match Guinness Book of Records holder Mark Biancaniello for the "most bees worn on the body," title. 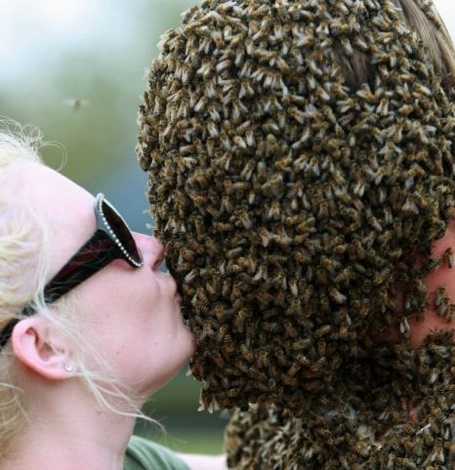 Here is the winner of a bee bearding contest receiving his victory kiss!

These date back several centuries.
Bees were believed to have originated in Paradise, and they are traditionally known as the "little servants of God" or "divine messengers."
The belief, in ancient times, was that they had knowledge of the future and of all secrets.
It is still felt to be very unlucky to kill one.
Country people and beekeepers take their relationship with the bees very seriously.
To prosper, bees need love and harmony around them.
Should the beekeeper's family be contentious and full of anger, the bees will suffer illness and die, or they will fly away.
Beekeepers in the past would communicate regularly with the bees, some visiting the bee hives each evening to tell of the day's events.
Until the early 20th century, beekeeping was almost exclusively a family affair.
It was common for households to keep at least two or three hives, and bees were considered valuable members of the family. 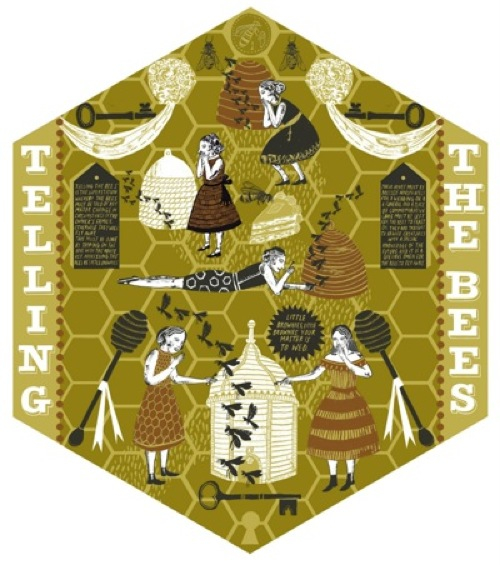 It was a common belief that bees could understand what was said and done around them, and they were often treated as having human emotions.
It was particularly important to inform the bees of a death in the family.
Should a beekeeper die, it was up to the eldest son or widow of the owner to convey this news to the bees and they had to do this properly and promptly.
If they did not tap each of the hives with the door key while telling the bees that the master was dead, it was believed the hives would be deserted.
After a death in the family, strips of black cloth were hung on the hives.
Funeral cake was left for the bees.
Similarly, a bride should inform the bees of her marriage date, and leave them wedding cake.
Even the setting up of hives was subject to old customs and superstition.
Bees should never, for instance, be bought.
Any bees that were purchased would either die or fly away.
So how did beekeepers acquire their bees?
They might barter goods in exchange for the bees.
Or they might borrow a stock of bees to start their own swarm with the promise of returning the bees to the rightful owner should they ever demand it.

There remain many superstitions regarding bees.
If a bee lands on a person's hand, this suggests money is on its way.
If a bee lands on someone's head, they will be successful in life.
Good luck or the arrival of a stranger should be expected should a bee fly into the home.
The bee of course should never be killed but can be encouraged to fly out of an open window.
The familiar humming of the bees was believed to be a hymn of praise.
The bee's sting is said to be a good cure for rheumatism!

TELLING THE BEES
[by John Greenleaf Whittier, a young American Quaker poet (1807-1892)]
He wrote religious and anti-slavery poems, and one of his hymns - 'Oh Lord and Father of Mankind' - remains an Anglican favourite to this day.
Telling the Bees first appeared in the Atlantic Monthly in 1858. 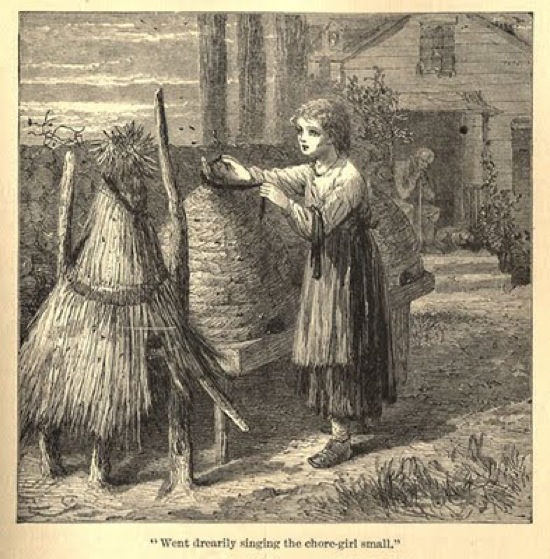 There is the place; right over the hill
Runs the path I took;
You can see the gap in the old wall still,
And the stepping-stones in the shallow brook.
There is the house, with the gate red-barred,
And the poplars tall;
And the barn's brown length, and the cattle-yard,
And the white horns tossing above the wall.
There are the beehives ranged in the sun;
And down by the brink
Of the brook are her poor flowers, weed-o'errun,
Pansy and daffodil, rose and pink.

A year has gone, as the tortoise goes,
Heavy and slow;
And the same rose blows, and the same sun glows,
And the same brook sings of a year ago.
There 's the same sweet clover-smell in the breeze;
And the June sun warm
Tangles his wings of fire in the trees,
Setting, as then, over Fernside farm.
I mind me how with a lover's care
From my Sunday coat I brushed off the burrs, and smoothed my hair,
And cooled at the brookside my brow and throat.
Since we parted, a month had passed,
— To love, a year;
Down through the beeches I looked at last
On the little red gate and the well-sweep near.
I can see it all now,—the slantwise rain
Of light through the leaves,
The sundown's blaze on her window-pane,
The bloom of her roses under the eaves.
Just the same as a month before,
— The house and the trees,
The barn's brown gable, the vine by the door,
— Nothing changed but the hives of bees.

Before them, under the garden wall,
Forward and back,
Went drearily singing the chore-girl small,
Draping each hive with a shred of black.
Trembling, I listened: the summer sun
Had the chill of snow;
For I knew she was telling the bees of one
Gone on the journey we all must go!
Then I said to myself, "My Mary weeps
For the dead to-day:
Haply her blind old grandsire sleeps
The fret and the pain of his age away."
But her dog whined low; on the doorway sill
With his cane to his chin,
The old man sat; and the chore-girl still
Sung to the bees stealing out and in.

And the song she was singing ever since
In my ear sounds on:
— "Stay at home, pretty bees, fly not hence!
Mistress Mary is dead and gone!" 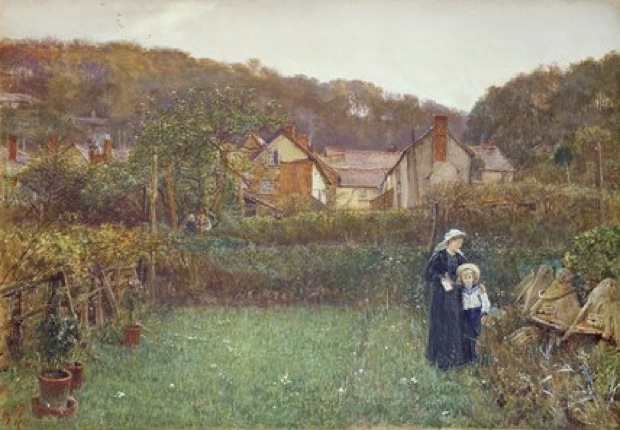