A Far from Fashionable Wedding 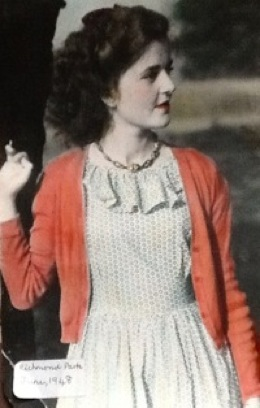 We first met when I joined East Ham Dramatic Society, and within two months we were engaged. I didn't actually have a ring,because we didn't have much money,but we said that when we had saved £100 we would get married. We didn't actually save any money,so we got married after six months. All of this filled our relatives with deep foreboding,and the first time my father met George he said,"I give it seven months." Suffice it to say, their fears were unfulfilled;we spent over forty years together,and were very, very happy together. 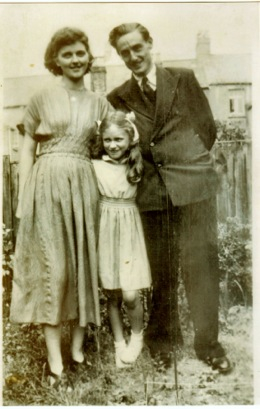 I was married in this dress;it was a beautiful blue

I still have the tiny pocket diary wherein I marked the date, December 3rd., when we were to be married. When I told my Headmistress the news, she said,"I hope you aren't going to have a honeymoon." She needn't have worried,we didn't have any money! As a young teacher I earned a mere £5 a week,and George was working in a factory for slightly less- by Friday each week we always had spam or kippers for dinner! We decided to be married in a Registry Office. I didnt attend church,and thought it would be hypocritical to make use of a church for our wedding; I know my mother did not approve. Many years later,when I was a christian,we renewed our vows. Sadly, my mother was not alive to see me finally become respectable. 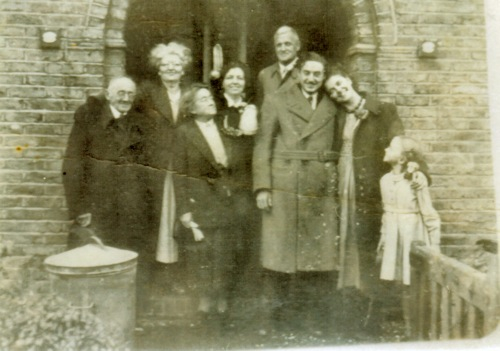 The only wedding photo. My little sister had just thrown a bag of confetti all over us!

There were many things missing at our wedding. I didnt have a new dress or coat. I didnt have an iced cake. We didnt have a fancy buffet. I did make individual jellies in paper cases, but our little kitten trod in several of them,so I had to throw the ones with pawprints in away. George went up the road to get crusty rolls,which we filled with the remains of a piece of lamb. We didnt have wine,just cups of tea. George didnt have a new suit,but wore his camel-hair Teddy-boy coat,dyed a darker brown for the occasion. I pinned a bunch of violets to the lapel of my coat,and as it was so cold I wore my old brown boots. There were only seven people(apart from we two) and we had ordered a taxi, but it was late. We almost ended up on the motorbike,but our carriage did arrive,so the wedding party fitted into two vehicles, and we were on time-just!
I was not nervous, just really happy. I meant every word of the vows I made,and although the wedding ring only cost £1 and is now extremely thin,it has never left my finger.18 years later,when an insurance policy matured, George bought me a thick gold band which sits beside the original.
We had one day for our honeymoon,and decided we would visit Aunt Nell,who had been at our wedding. She had a large house by the Thames,west of London. We made spam sandwiches and set off on the motorbike. Sadly, we lost our way! We sat on the bike in a deserted London Street and ate our lunch,then made our way home again.

On Monday I was,of course,at school. I had warned my class on Friday that they would in future have to call me by a different name. They were excited,a little giggly, but stood as usual when I entered the room.
"Good morning 1D"
"Good morning,Mrs. Deal!"
I felt truly married as I sat to take the register. 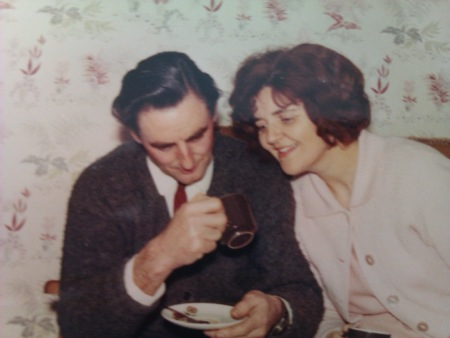 It may not have been a grand wedding, but I can honestly say it was a great marriage!
Category: Writing