Before Esmeralda could leave home and become a Film-star,she had to see the King.

The Water-people have all kinds of rules and regulations, just like us-the dogfish must buy new licences every year, for example, and there is a very strict law against throwing things at submarines-and Esmeralda knew that if she wanted to leave the kingdom she must carry a Royal Passport. She carefully rolled up her magazine, and at once set off on her travels.

The road to the Palace lay through a tangled forest of crimson cherry-weed. Esmeralda wriggled impatiently between the branches,shaking the baby fish out of their nests and bumping against all kinds of little wild sea-creatures who sheltered there, so that a chorus of angry voices followed after her. She arrived breathless, with her hair and temper both rather ruffled,at the great wrecked Galleon which was the Sea-King's Summer Residence. For hundreds of years it had stuck fast in a sandy valley,its deck slanting wildly up into the sea; now it stood straight and splendid in scarlet and shining gold. It was guarded by a troop of lobsters wearing the royal livery of pink and purple armour-plate. They moved their stalky eyes nervously to and fro,and clashed their pincers as Esmeralda drew near.

Now she may have been flighty and was certainly vain, but Esmeralda was no coward. She swam briskly up, holding tight to her magazine,and said to the Commanding Lobster(who wore heavy gold tail-tassels and had whiskers two feet long):

"I wish to see His Majesty on private business".

She tried to make it sound important,but felt very small and untidy beside the splendour of the Palace and the glory of the guards; and she was quite thankful when the officer bowed squeakily and marched her off. Up a long golden ladder they went,and across the shining deck, where an Octopus with eight loofah-brushes,one for each arm, was scrubbing hard and singing in a breathless little voice. Suddenly they came to a door, guarded on either side by swordfish,who 'presented noses'and then stood like silver statues. 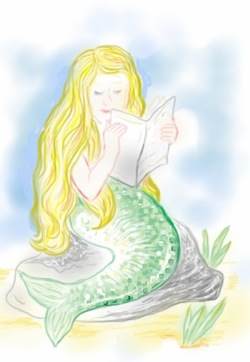