When I was a child I envied my Grandparents: I longed with all my heart to be a farmer like Grandan,with my own haystacks and pigs and patient, heavy Suffolk Punches. For the privilege of breakfasting on eggs from rainbow-feathered hens who were actually nodding-acquaintances, I would happily have forsaken for ever the sea-breezes and clanging trams of Brighton. I day-dreamed of the wild dog-roses and leaden grey skies of the Cambridgeshire fens,and regularly suffered a crippling migraine attack, the result of hysterical anticipation,before the annual visit. It seemed to me that Granny and Grandan dwelt in harmony and rich content in Paradise,lacking nothing.

Village- and particularly farming, or land-owning- communities live with a historical perspective which is lacking in a large city,with its shifting population of diverse origins. In the churchyard at Wicken I was introduced to a formidable contingent of my forbears:tablets and ornaments inside the church testify to the significance of the Fuller name;even the enlargement of the front pew was due to the weight of one of one of my distant relations!

Through marriage the family network had spread to neighbouring hamlets and farms.Even as a child I was aware of the comfort and strength of this feeling of continuity,and longed to be included:when I learnt, much later,of my father's rebellion against Grandan's autocratic rule - a rebellion which led to the loss of Eden for our exiled family( although we visited yearly) I wept inwardly for a dream destroyed. I was never to be part of the cosy converse at table about Fuller family affairs- romances, births, deaths, the occasional scandal or success. For my Grandparents there was a sense of the importance of Fullers in the universal scheme. My contemporary relations are widely scattered, and we seldom meet 'en masse' except at funerals or weddings:whereas for Granny family visiting was a major form of recreation,and meant escape from the tedium of daily chores. Yet even now, after long years of absence, I know I would be heartily welcomed and nourished, as the daughter of my prodigal Fuller father,at any of the family homes in Cambridgeshire where his part in the saga is remembered. 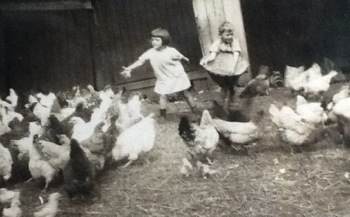 Feeding the hens. I was about four

My Grandparents had status in the community- particularly Grandan, since he was the Man, and therefore undisputed Lord and Master of the farmhouse,outbuildings and surrounding fields. Between them, the Fuller family owned a great deal of land and property; my Grandparents, being of this noteworthy lineage,were regarded with respect by the tradesmen and villagers, particularly those who knew Grandan as ' The Gaffer'. Although much of this respect was due to the power and position which had been handed down with his inherited land,it must be said that my Grandfather was a conscientious steward,increased the size of the farm, and worked hard in the fields with his men. I remember him as a gentle,generous Benefactor,yet he was known as a strict master, and was often a stern disciplinarian in the home.

The farmhouse, as I remember it, was a long,low,thatched building. There was an orchard with apple-trees and a swing,a garden where I plundered gooseberry- and blackcurrant-bushes and petted the plump rabbits,and a cool, sweet-smelling dairy where the milk stood in shallow pans waiting for the cream to rise. Granny worked endlessly, and did everything by hand; she churned the butter in a sort of rotating barrel. I was allowed to turn the handle,and listen for the thump and slap of the newborn butter generated from the milk within. She made delicious cream-cheeses and egg-custards - I used to help by collecting the eggs, haphazardly laid by a motley flutter of hens who seemed to expend what little sense they had in a vain attempt to outwit me and find a secret place to hatch and raise a family. Even now I feel moved by the beauty and simplicity of this way of life,growing and gathering and eating of your own produce,the fruit of your labours.

The posh car: the only one in the village! 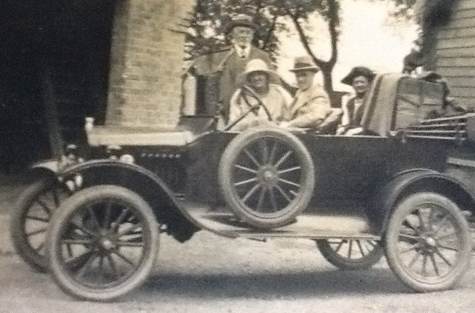 End of part one...
Category: Writing