In the 1990s Mary and I went on a never-to-be-forgotten holiday to Kenya.

Amazing! To see giraffes in a line,sailing across the plain with their Margaret Thatcher rocking gait:to be feet away from a black rhino(luckily he was very short-sighted) in the African dusk:to see a lioness with her babies tumbling all over her: and to be much too close to the open mouth of a hippopotamus!

We were at Treetops,where Princess Elizabeth first heard of her Father's death,when I had a bad dream. I told everybody about it at breakfast. In my dream I was being chased through the house by a hippopotamus. As I ran I closed the doors behind me, but he pursued me relentlessly and I woke still feeling the terror.

Two days later we were at Lake Naivasha,and the dream was long forgotten. Many of the group were suffering badly from sickness, but I was fine. Early in the morning I went down to walk in the grounds of the hotel complex. I could hear excited shouts of "Hippo,Hippo!" and people were pointing in the direction of the open-air swimming pool,so off I went to investigate.

None of the guests were about,and I was unprepared for what I found. During the night a young hippo had been chased by dogs into the swimming pool,and he was unable to lift himself out. What an opportunity for a photograph!

I stationed myself at the corner of the pool and waited. From time to time he would lift his head out of the water- to take a breath of fresh air,or so I thought. < br /> 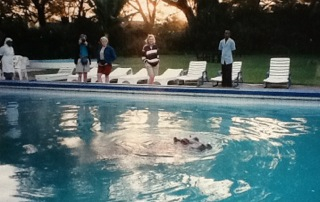 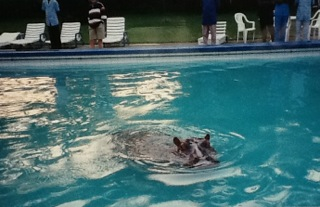 What I did not see( although the three photos I took clearly show this) was that he was looking at ME, and each time he popped his head out of the water he was getting closer!

I was happily engrossed in my photo opportunity,and quite unprepared for what happened next.

Suddenly he rose up out of the water, managed to get both front legs on to the edge of the pool,and opened his mouth WIDE! I could see the back of his mouth and could have had a perfect photo of his teeth and tongue, but I didn't wait! I dropped my camera( luckily the strap was round my neck) and RAN!

The hotel management made sure that guests were unable to approach the pool from that moment,and we were able to watch the action from a safer place. All day there were rescue attempts, and by means of sandbags and a ramp the exhausted youngster was released.

By that time we were on our way to another part of our African adventure.

I was extremely glad to be alive!