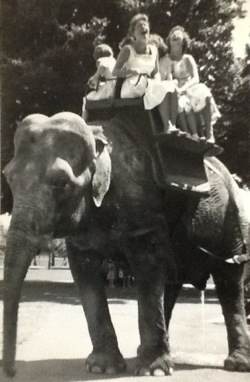 During the sixties I was working in an East Ham school. It was the practice there to manage school outings in years rather than classes, and one sunny spring day the whole of year one set off by coach to Whipsnade Zoo. We had songbooks and games for the journey, and after a long ride and a guided tour of the main attractions settled for lunch on a grassy hill, with(believe it or not) wallabies bouncing around us. We had three student teachers with us,and they decided to liven the afternoon with a ride on an elephant,so we were accompanied by quite a few children hoping for some entertainment.

They were to be well rewarded!

The elephant was huge,and her path was lined by delighted children cheering their courageous teachers on. After a few squeals and some ungainly scrambling, all three were aboard, and slowly and ponderously Jumbo began to move. Cameras were snapping,some children were clapping; I positioned myself for a memorable shot(there was to be a prize for the best of the day's photographs) when suddenly the elephant stopped dead. The keeper tried to get her going again, but she stubbornly stood still.

We became aware of the reason for her reluctance when we all heard the sound of pouring rain. It was as if a small waterfall were gushing over the path.... If you look at the photo, you can see it!

Slowly,light dawned on the travellers,who were unable to escape the situation. They began to scream with laughter. Children were hysterical, holding each other and even rolling on the ground,as the dignified pachyderm continued to empty her bladder until a wide pool appeared beneath her.

Even then she was not ready to move. We heard a sound as of several potato-sacks hitting the floor behind her. By this time I was incapable of taking another photograph!

Having completed her toilet, Jumbo moved placidly on, leaving it to one of the keepers to clean up after her. She was quite unaware of the entertainment she had provided....

'Normal Services will be resumed as Soon as Possible.'