When my husband died, I lived for a long while in a desert. It was impossible to settle in such foreign territory. I filled the empty,restless days with activities which would make me tired and use up my thoughts. I found a book which offered a project. It was a spiral-bound paperback which contained a series of walks in the city of London,each starting at a named Tube Station and ending at another. I set off once a week at about eight o'clock,armed with a camera and notebook, and followed the route described in the book. When I arrived home I wrote notes about each journey,and the photographs and drawings were put in a large book.
I learned a great deal during this time,and hope to share some of the interesting discoveries I made via the website. London is a wonderful city,full of history and hidden secrets, and it is possible to find something new and fascinating every time you enter the Square Mile. 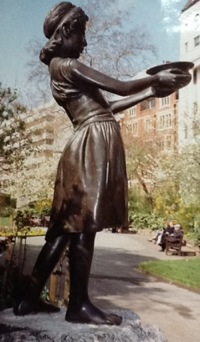 My first walk began at Temple station. I turned right through neat public gardens, where I found some interesting statues. My favourite,a young barefooted girl holding out a bowl for alms,provided a drinking fountain. The inscription read:
FROM CHILDREN of the LOYAL TEMPERANCE UNION
In memory of work done for the Temperance Cause by
LADY HENRY SOMERSET
President of the National British Women's Temperance Association, Incorporated
June,1896
"I was thirsty & ye gave me drink."
Unfortunately, the drinking fountain was dry! 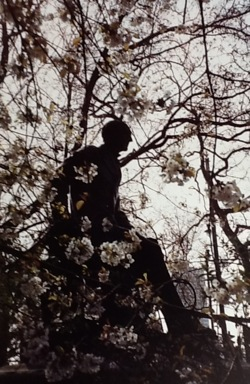 John Stuart Mill, the Victorian philosopher and political economist, is remembered here. He sits under a cherry-tree in contemplative mood.
This is a peaceful backwater,within easy reach of busy Fleet Street,but it is rich in history and many of its buildings are of great age. During the second World War german bombs were responsible for a great deal of destruction, but since then there has been much careful reconstruction, particularly in the Round Church. 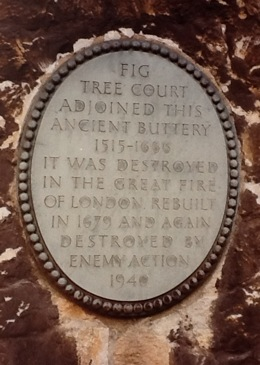 THE TEMPLE takes its name from the crusading Order of Knights Templars, founded in 1118 to protect pilgrims on the road to Jerusalem. They were powerful throughout Europe,& were given possessions in many lands. Henry 1 introduced them to England,& they first settled in Holborn. Wealth and pride led to their downfall; they were suppressed, and the property passed to the Knights Hospitallers.
Inevitably,at the time of the Reformation, the Temple became Crown Property, subject to the tenancies of the lawyers who had settled there. As tenants of the Hospitallers they had formed themselves into two societies,the Inner and Middle Temple. In 1608 the two associations acquired the freehold of the Temple lands by charter from James 1( one of the conditions was that they were to maintain the Temple Church and its services for ever).
During the 18th Century, law students lodged and studied in the Temple until they obtained their degrees. Now rents are so high that only the most successful barristers can afford to live there. Their names are painted around the doorways of the 'Chambers.' 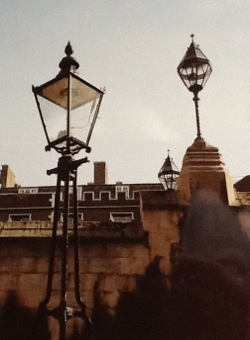 The Temple is the last area of London to be lit by gas-when I walked there, the lamps were manually operated. It is a complex of ancient buildings linked by courtyards- Brick Court, Essex Court, Pump Court, Fountain Court, Fig Tree Court.Both Middle and Inner Temple share the same Church,but possess separate Halls and Libraries. The emblem of the Middle Temple is the Paschal Lamb,& that of Inner Temple is Pegasus, the winged horse.
We shall be looking at Middle Temple Hall(1573) and the wonderful Temple Church(consecrated in 1185) during the second part of the walk. 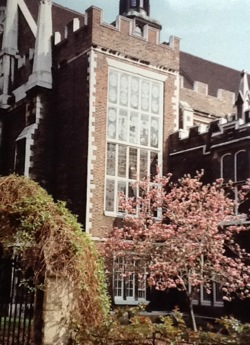