During one of my Square Mile Walks, on the way to the Museum of London and The Barbican,I found an interesting little Park, which has a fascinating history. The Public gardens known as Postmans Park were laid out in 1880 on the site of the former churchyard of St, Botolph, Aldersgate; the disused burial grounds of Christchurch, Newgate Street,& St. Leonards, Foster Lane, adjoined the gardens,& were added in 1887 and 1890 respectively. The Park is well above street level because of its origins. Against the walls you will find some of the old gravestones,neatly stacked.
These burial grounds were formed over the old city ditch or moat-when the foundations of the nearby GPO were being excavated, the line of the Roman wall & ditch could be distinctly traced,& remains were found of the support for the bridge that once gave access to Aldersgate. 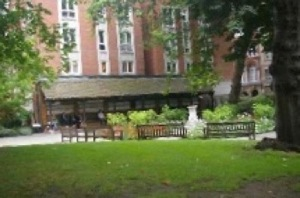 At first sight this appears to be quite an ordinary little park - it has a small,circular pond with goldfish,shrubs,trees,grass and benches; but it is home for a most unusual monument,the brainchild of an eminent victorian artist, George Frederick Watts. 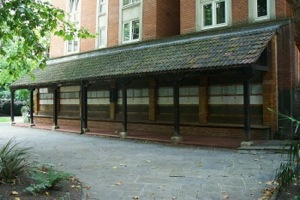 G.F.Watts, R.A.,first wrote to the Times in 1887, proposing a project to mark Queen Victoria's Jubilee - a record of stories of heroism in everyday life. The idea was not enthusiastically received,and no National Memorial was created,but Mr. Watts himself set out to commemorate the actions of some of those who lived and worked in London.
He erected in Postmans Park a 50ft. long open gallery with a tiled roof (in fact, it looks rather like a bicycle shed). Along its wall he placed a series of tablets,made of tiles from the Doulton Factory,which described a variety of life-saving deeds.
George was not a well man,and it eventually fell to his wife to carry on the work.
He was very disappointed that there was no backing for his idea; it is reported that he said that if he had proposed a horse-racing track in Hyde Park he would have received ample support. 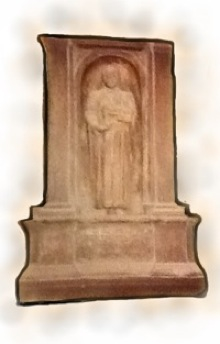 The gallery was formally opened on 30th July,1900,by the Lord Mayor of London. The Bishop of London was present,and said that there were special reasons to be thankful,that this was not just a public space,but also a record of 'high and noble deeds.' George was too ill to attend; he died on July1st.,1904.
In December,1905,a modest bronze statuette was unveiled in the gallery. The inscription reads: 'In Memoriam George Frederick Watts,who desiring to honour self-scrifice placed these records here.' 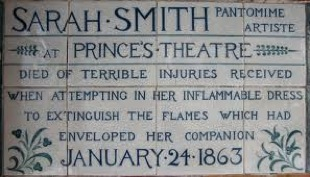 Today the little Park is not a well-known attraction; although it is used by local office workers as a pleasant place for midday sandwiches, tourists are not frequent visitors.
It is more often found by chance,but once found is not easily forgotten! 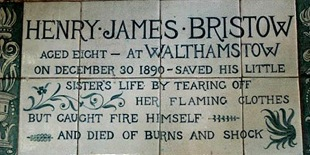 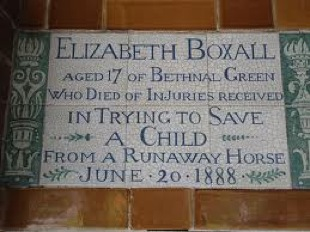 The true meaning of the memorial gallery only reveals itself as you walk along it, reading the stories set out in the beautiful patchwork of tiles. It is a growing experience; by the time you reach the end your head and heart are full.
There are tales of extreme courage and selflessness which cannot fail to move the reader; many of the heroic acts were those of mere children. I have added more information about some of the stories,and will publish them later; underneath are details of the deaths of two brave Doctors. 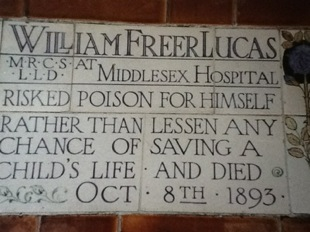 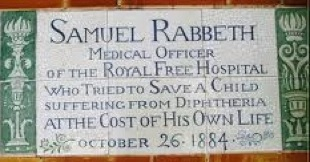 William Freer Lucas, an anaesthetist at the Middlesex Hospital, was on duty when a tracheotomy was being performed on a child seriously ill with diphtheria. He died shortly after the operation,having contracted the disease by inhaling mucus from the child he was trying to save.
Another plaque tells the story of Samuel Nabbeth, a Medical Officer,who died of diphtheria contracted while sucking a tracheotomy tube to unblock it;unfortunately, the child also died.

The Spectator published the following:

'Had the child lived, for whom thy life was lost,
We think we had not grudged the bitter cost;
But both have died,& some will say,in vain-
Thy calm,heroic spirit has been lost.

And yet,perchance,beyond the realm of sense,
At our poor folly, angels may have smiled,
Seeing a young man enter perfect life,
And in his arms, a little loving child.'
Category: Travel Journals