Make yourself a Thaumatrope 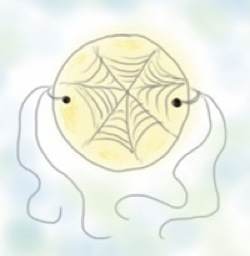 The word Thaumatrope comes from the Greek:

Thauma, a wonder,& tropos, a turning.

Thaumatropes were Victorian optical toys. In a way, they were the precursors of cinema; they worked on the same principle,that the human brain cannot separate individual pictures when they are presented at great speed, but blends them together into a continuous stream.

Making a thaumatrope is simple.

You will need a circle of firm card, some string, a pair of compasses or anything with a sharp point, and a black felt-tip pen.

Make two holes, one at each side(look at the picture). Take two lengths of string,each about 12inches long. Thread them through the holes and knot them close to the card so that you have two threads to hold on each side.

Now you are going to choose your two images. I have given the easiest ones,a spider and his web. They are easy because the spider can be anywhere on his web; if you choose,for example, a bird and its cage you must place the bird carefully so that he sits on his perch.

Draw the spider on one side of the card, and a web on the other.

Now you have to spin the card.

Hold the two strings on each side. Be firm,and put your fingers quite close to the card.

Spin the card by rubbing your fingers rapidly together. Its not difficult,but needs practice.

The spider will seem to be sitting in his web! Your brain has seen the two pictures as one.

You can, in the same way,put a bird in its cage,a girl on her pony,a hat on a lady,and a picture in an empty frame. But remember to put both bird and cage centrally on the card, and make sure the images are the right way up(before you draw, turn the card over so that the top of the second picture is behind the bottom of the first one,and it will be fine). Remember, the card is spinning,so the two pictures are seen one after the other, but when your brain sees them,they must both be the right way up.

I have been with 30 seven-year-olds, who all made one, so you should be able to do this! 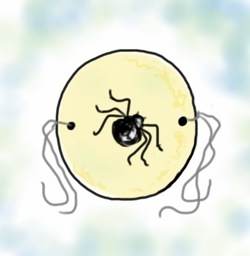