I am going to recommend a book for you; if you want to learn more about the London poor in victorian times, you could not find a better one. It is called "London Labour and the London Poor." 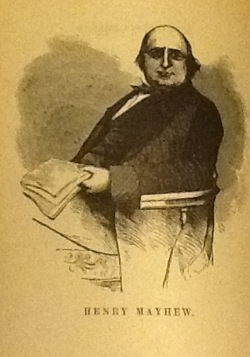 Henry Mayhew,whose face to face interviews form the body of the book,did a great deal to uncover the unsavoury truth about the lives of The Residuum. He led an interesting life:at the age of 15 he ran away from Westminster School,having refused to be flogged by the headmaster, and was sent to India as a midshipman.
He produced a play in 1834, became editor of Figaro in London in 1835,was Editor of Punch when it began in 1841,was declared bankrupt in 1846, and had this book published serially,1851-1852. 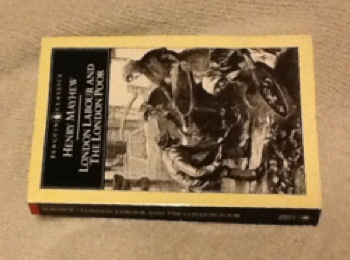 Henry divided the street people into groups.
There were street-sellers,street-performers,street-buyers etc.
The poorest and most miserable were the street-finders.
Some people,called 'hard-ups',spent their days collecting cigar-butts. They would dry them at a fire,and sell the tobacco to the very poor. The 'pure' pickers collected dogs'-dung,and sold it to tanners,who used it in preparing skins. Some fished in the sewers,some picked up coal; the mud-larks stood in the River Thames all day,searching for anything they might sell.
This is what Henry wrote of the Mudlarks:
'They collect whatever they happen to find,such as coals, bits of old iron, rope, bones, & copper nails that drop from ships while lying or repairing along shore. Sometimes the younger & bolder Mudlarks venture on sweeping some empty coal-barge,& one little fellow with whom I spoke, having been caught in the act of so doing, had to undergo seven days' imprisonment in the House of Correction: this, he said, he liked much better than mud-larking, for while he stayed there he wore a coat & shoes & stockings, and although he had not overmuch to eat, he was never afraid of going to bed without anything at all- as he often had to do when at liberty. He thought he would try it again in the winter, he told me,saying, it would be so comfortable to have clothes and shoes & stockings then,& not be obliged to go into the cold wet mud of a morning.
'At one of the stairs In the neighbourhood of the Pool, I collected about a dozen of these unfortunate children: there was not one of them over 12 years of age,& many of them were but 6. It would be almost impossible to describe the wretched group, so motley was their appearance, so extraordinary their dress, and so stolid & inexpressive their countenances. Some carried baskets, filled with the produce of their morning's work,and others old tin kettles with iron handles. Some,for want of these articles,had old hats filled with the bones & coals they had picked up,& others, more needy still, had actually taken the caps from their own heads,& filled them with what they had happened to find.
'The muddy slush was dripping from their clothes & utensils,& forming a puddle in which they stood. There did not appear to be among the whole group as many filthy cotton rags to their backs as,when stitched together,would have been sufficient to form the material of one shirt.'
He went on to interview some of the boys,and I shall include some of the conversations he had in later articles. 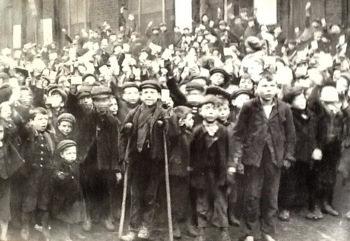 Here are some children waiting for a tea-party at the Ragged School in the East End; some of them are holding up their tickets. It might have been a Christmas party.
These were sometimes called 'Robin Teas', and one little boy, looking at chicken on his plate, is said to have asked,"Is this real robin?"
Category: Victoriana