In Copperfield Road, Mile End, there is a very interesting Museum.
I worked there for a number of years,both teaching in the Victorian Kitchen and drawing for them when required.

I drew a set of postcards,based on a lesson for primary children,and they had my victorian paper doll-kits displayed in the dear little shop.

The story of the postcards is this:
One day Polly's mother told her that she was going away for a few days.
She asked Polly to look after their rooms until she returned. 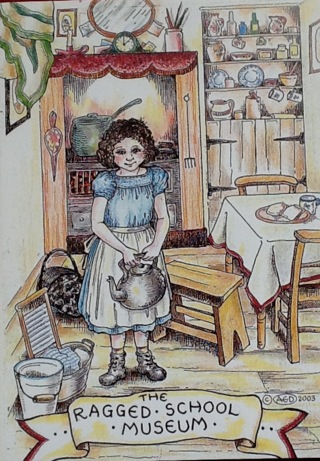 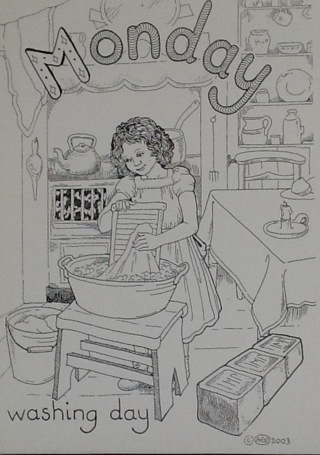 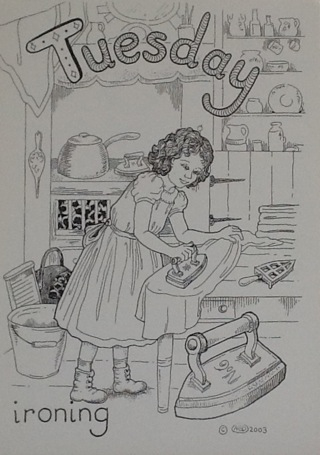 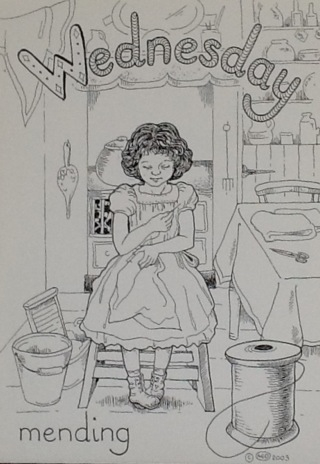 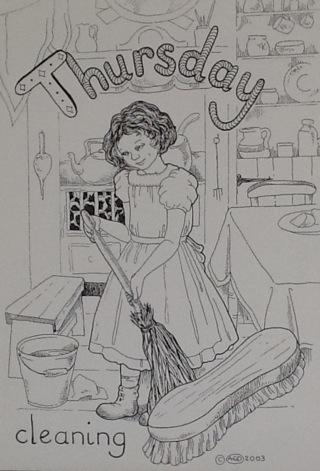 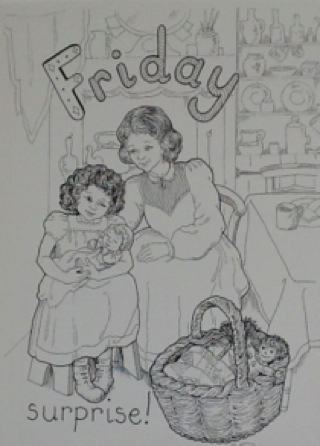 On Thursday she cleaned the rooms.


The museum,which backs on to the canal, is in a large building,once a warehouse,and for years a Ragged School and Sunday-school (at one time1,000 children were day-pupils and many more attended on Sundays).
The picture was taken in 1903, and shows a crowd of children,many barefoot and all poorly clad,waiting to be admitted for a charity tea.
Some are holding up their precious tickets! 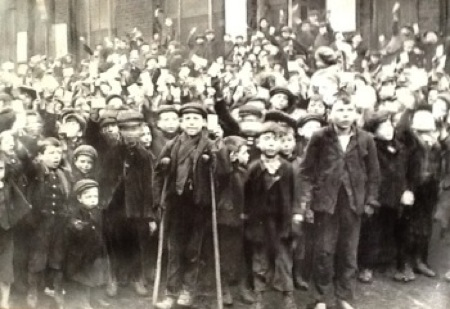 On the second floor has been set up a small, staged kitchen,as it would have been in the 19th century.

There is a range with a glowing 'fire,' a dolly tub,hung washing, a flat iron,a mangle,and a variety of other victorian artefacts.
The pupils who came were able to handle and use the objects; some of the chairs were from the old Sunday-school,and were made with wooden pegs instead of nails.

I loved working there,and was able to research the history of the Ragged School Movement. 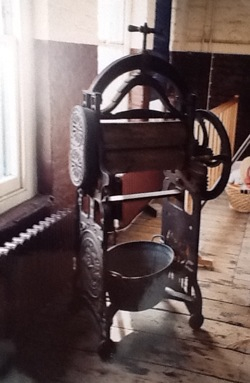 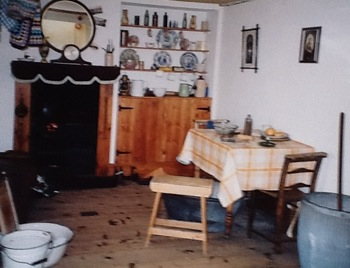 In the early 1800s,education was for the rich,& later the upper middle-class.
To be poor was to be illiterate.
Even in the 1870s,when schools began to be built, the poor could not find the few pennies a week it would cost: hundreds of children in the big cities were homeless, many more had to help the family by working at home or finding odd jobs.

Here is a family working to make matchboxes. They were paid twopence halfpenny for 144 boxes,and had to buy their own glue! 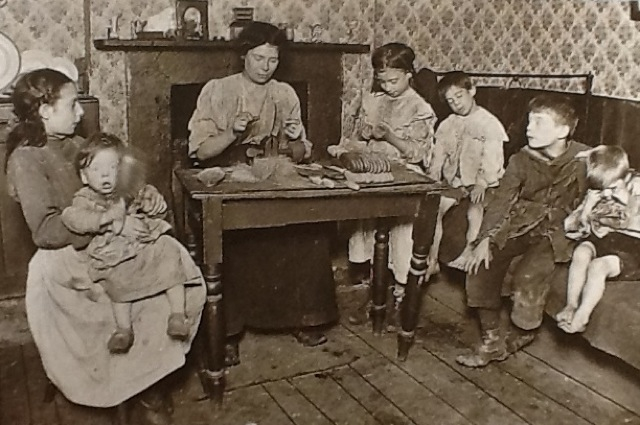 The situation for many children,who roamed the streets and markets scavenging for food,& who became involved in petty thieving & housebreaking from an early age,was BLEAK.
Starvation,disease & exposure to bitter weather meant that large numbers of the very poor died before reaching their teens; those that survived had no skills and lived on their wits,becoming hardened thieves & wild vagabonds,with noone to guide or care for them.

The Ragged Schools were set up to save these children,the Residuum,or dregs of society. 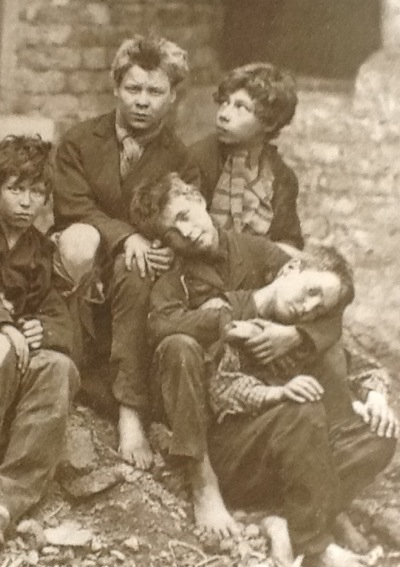 WHO STARTED THE RAGGED SCHOOLS?
Many of the well-meaning individuals who set up the early Ragged Schools were never praised or acknowledged for their efforts. Some,however, have left a lasting work.
DR. BARNARDO was young Irish christian.
He trained as a missionary at Bow,and helped during the East End cholera epidemic in the 1860s, when half the population of Wapping died, infected by the filthy River Thames.
He saw the dreadful poverty and ignorance,and gave practical input, setting up schools and work opportunities; he undoubtedly saved thousands of children from a life of crime or early death.
In the Ragged Workshops children chopped firewood to sell,or learnt simple carpentry.

He set some of them up as shoeshine boys,and taught them to save from their earnings and help pay for board.
There were training ships in the Thames, and some became seamen. 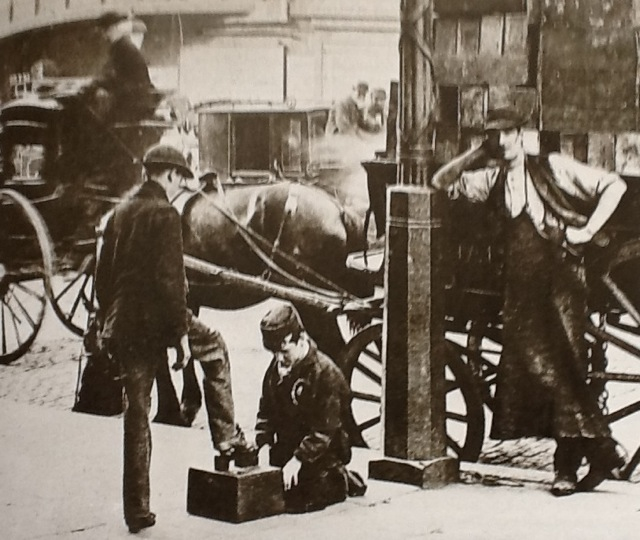 The EARL of SHAFTESBURY was one of the giants in the movement,and as a prominent politician used his influence to change laws and protect children.
He saw that eight to ten-year-olds were working long hours in factories and down mines, climbing inside chimneys,getting involved in crime and sleeping in the streets.
He was a major mover in the foundation of the Ragged School Union,and some major legislation protecting children was due to his efforts.
When he died he was honoured with a funeral in Westminster Abbey.

On October 8th.,1885, the procession passed through London.
The streets were lined with all kinds of ragged individuals: crossing-sweepers, flower-girls,chimney-sweeps,the outcasts of Victorian society.
Every one had a scrap of black cloth or a black ribbon pinned to their poor clothing,as a sign of respect for a man some of them had met, a man they knew had spent his life working to improve their situation.

WHY WERE THE RAGGED SCHOOLS SET UP?

There were a number of very different reasons:
To instruct children in religion
To reduce street crime
To teach practical skills
To enhance job prospects - ( for thousands of 'lost children' destined for a life of want and crime)

WHERE WERE THEY SET UP?

At the time a journalist wrote: ' Schools are nets to catch small fishes,& must be set down in places where the fish abound'.
They were in the poorest areas.
There was no support from Government, so any empty building would do - old work-rooms,abandoned warehouses like the one where the Museum is now situated, a stable, an attic over a shop.
There was little money for equipment and often neighbours complained about the noise,so some schools had to move a number of times.
Ragged Schools were told to look in the GUTTERS for their pupils. 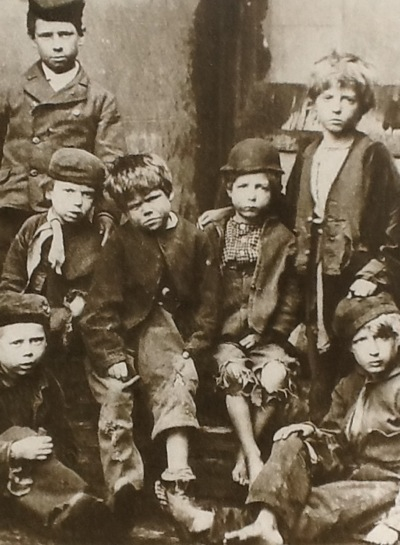 THE PUPILS
They were referred to as 'The Sweepings of the Streets'.
They were the poorest of the poor- dirty,hungry,verminous & unloved.
Here are some descriptions of real children, from journalists and teachers.

1859 Here come four meagre little forms,they are mere children,all orphans,destitute,living upon the streets, without a home or a friend in the whole world.
One has the remains of a grown man's jacket hanging about his little limbs.
Dirt and sores disfigure his body,his eyes are swollen,& he can scarcely draw his breath from inflammation of the lungs.

1877(Dr. Barnardo) She had no boots or stockings on,and no fragment of hat or bonnet covered the wild hair that hung in wet,tangled masses about her neck.
Her thin dress, showing great rents here and there,was as wet as though she had been dipped bodily into a pond & then stood up again.


As we shall see, the Ragged Schools saved many of these ragamuffins from a life of poverty & crime,& even early death from exposure. 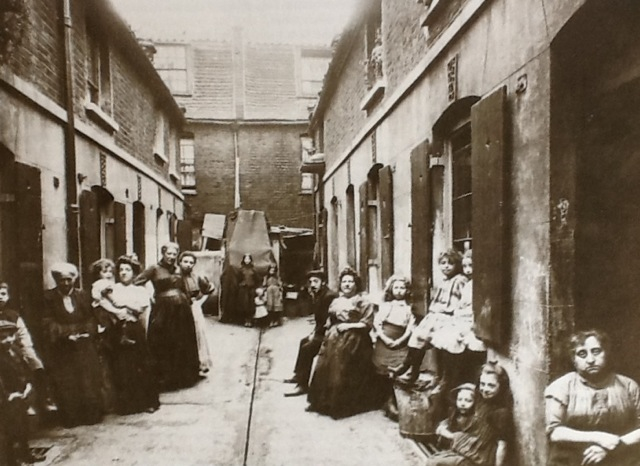