In 1889 the Home Office produced this report, which was not published for public reading: 'The East End of London is a starving, hell of Poverty which lies in lurking silence to threaten the life and wealth of both the City and the West End. Manifestly, this is poverty as a way of life. These people have nothing else to do but be poor.'

There were three major contributors to the appalling conditions of the thousands of helpless slumdwellers who filled the Rookeries behind the prosperous facade of our capital city: lack of regular employment, slum housing, and the pollution of the River Thames. 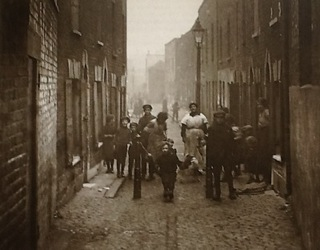 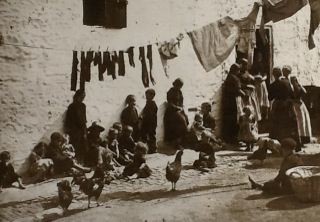 There were inadequate sewers,and it was common practice for people to throw refuse of all kinds into the street.
Whole tenements would be served by one or two privies; these would be emptied by the 'lavender-men' every week or so, and the contents were tipped into the river.
Tanneries and knackers' yards regularly added their waste products to the water, which was thick and the colour of black treacle.

Cholera spread like wildfire: in the 1860s half the population of Wapping died in a few weeks. 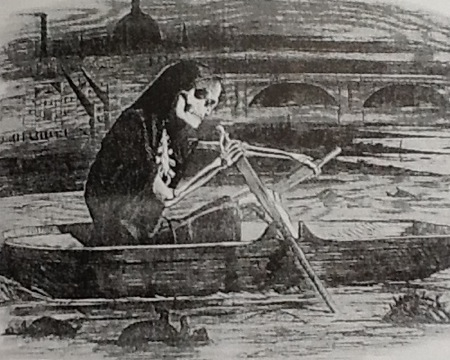 Inescapably, this was the water that Londoners had to drink; 82 million gallons were taken from the Thames daily for that purpose, and inevitably disease followed.

The water-pump which served several hundred families often killed them. 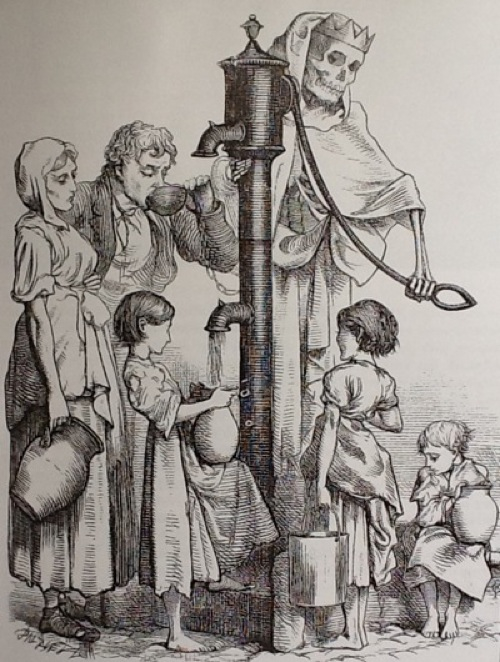 In June,1858, an exceptionally hot summer and unusually low rainfall combined to produce what everybody knew as 'THE GREAT STINK.'
The windows of the Houses of Parliament had to be draped with curtains soaked in chloride of lime so that the members could breathe.
To cross Westminster Bridge it was necessary to cover one's nose and mouth; the pleasure-steamers gave up their cruises because customers could not eat or drink.
There was even talk of moving the Law-courts to Oxford or St. Albans. 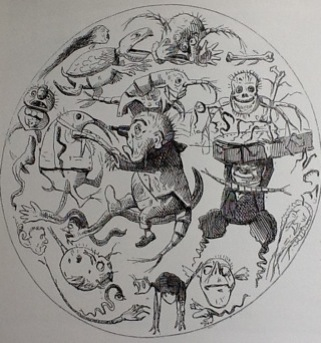 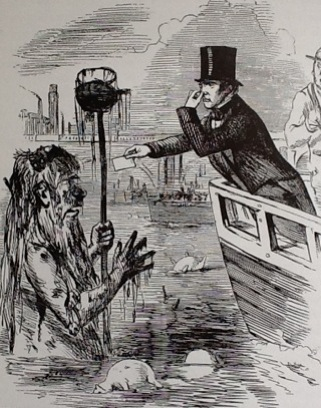 The newspapers published graphic cartoons showing that the Thames was lethal.

Sydney Smith wrote that there were 'A million insects in every drop', but it was the bacterial content that caused so many deaths. Luckily heavy rains alleviated the immediate problem,but Edwin Chadwick,a barrister who also worked tirelessly to alleviate working conditions for children,took it upon himself to investigate the sewage system and visit the Rookeries. 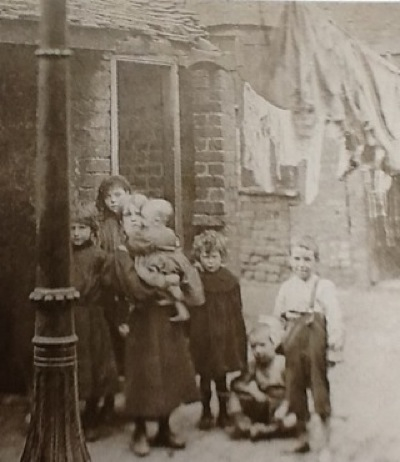 He found that two and three thousand people were crammed into a hundred houses,and his surveyors produced reports in support of his 1848 Health Act, which was making slow progress through Parliament.
It was generally perceived that disease was spread by bad air('malaria'),and although water was the real culprit, the attempts to relieve crowded conditions did in fact help to improve the situation of the poor. 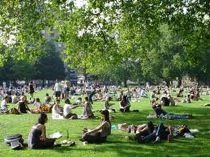 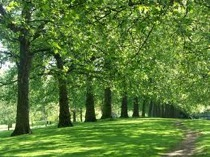 This was not all Chadwick did; he produced a Report on Interment in Towns,which showed that graveyards in London were several feet higher than normal ground level( this was not helped by the high deathrates due to infectious disease), and proposed a closing of churchyards in the city.

The closure of burial grounds, development of a sound sewage system, and destruction of the filthy slums,were due in great part to the surveys of men like Edwin Chadwick, but it was slow legal work, and it was not until the Disused Burial Grounds Act of 1888 that open spaces, making new use of the old cemeteries, began to bring green trees and parkland areas into the life of the city.
Category: Victoriana