In 1951 I was in the Victoria & Albert Museum,and purchased the Commemorative Album to the Great Exhibition of 1851.
One hundred years before,a great idea had been brought to fruition; the very museum in which I stood had been built on land purchased from the profits made by The Crystal Palace.
In the same Road, the Natural History Museum, the Science Museum and the Geological Museum were also open to me because of the 1851 Exhibition.
The Royal Albert Hall was another byproduct of what the book describes as: 'One of the most outstanding success stories of the nineteenth century'. 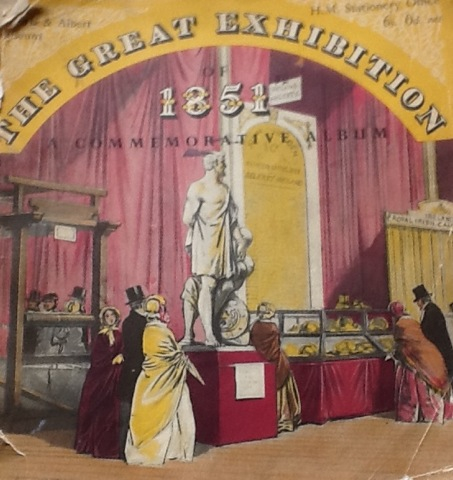 The British people did not take to Prince Albert.
After all, he was foreign.
He was an intelligent, serious and extremely well-intentioned young man, but could find no useful work to do - Victoria kept her hands on the reins as far as matters of state were concerned,and he must have felt side-lined and perhaps bored.

The Exhibition was his chance to show his ability, and in spite of much opposition became his crowning(excuse pun!) achievement.
Victoria was to write later, in her diary: "Every time one returns to the Exhibition,one is filled with fresh admiration of its vastness, and never tires of it and its beautiful interesting contents.
To see this wonderful Exhibition,which has pleased everyone as dearest Albert's work, this has, and does indeed make me happy." 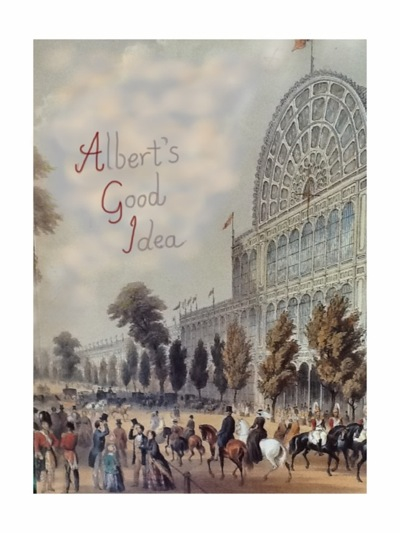 What Prince Albert proposed was a Great Exhibition, to show all the wonderful achievements of mankind in the 19th.Century.
Other countries would be approached for their contributions,and half the space would be reserved for them, but Great Britain and the Empire would display all their products and discoveries in the other half of the gigantic building,which would be purpose-made. With the Queen's approval & encouragement, a special ROYAL COMMISSION was set up in January,1850.
There were 24 people,all experts of different kinds, & Prince Albert was to be President.
(The Commission is still in existence today, and a member of the Royal Family is always President).
The commission was to organise finances,because everything was to be paid for by voluntary contributions from the public; and they would choose the design of the Exhibition building.
They put advertisements in all the major newspapers and waited for architects and engineers to respond.
THE COMPETITION
There were two special requirements for the building.
1 It had to be TEMPORARY - it would be removed after a year.
2 As Hyde Park was the chosen site,the building could not leave permanent damage - trees must be left growing, for example.

After a while designs were sent in, but they were all very disappointing.
Most were heavy brick buildings, a bit like the new railway stations - all the trees would have to be cut down,& after the exhibition closed there would be piles of rubble to clear away.
Time passed, & the Commission were desperate.
They decided to make a 'pick-&-mix' compromise, using the best bits of the designs that had been sent in.
It had a sort of dome, & was heavy and ugly, but what else could they do?
They prepared to launch the chosen plans.
9 DAYS TO GO
Now an amazing coincidence occurred.
It happened that a man called Joseph Paxton, an engineer and gardener who had been working at Chatsworth & designed the great glass Conservatory there,was visiting London with a friend and saw the mix-and-match brick design.
He was not impressed by the sombre, massive structure, and said to his friend, "I have a notion in my head."
His friend DARED him to send it in.
He had only a few days!
During that week, while he was at a meeting, he sketched a rough outline on blotting-paper.
The next day was spent in making proper plans of a huge glass-and-iron exhibition building,which he posted to the Commission. 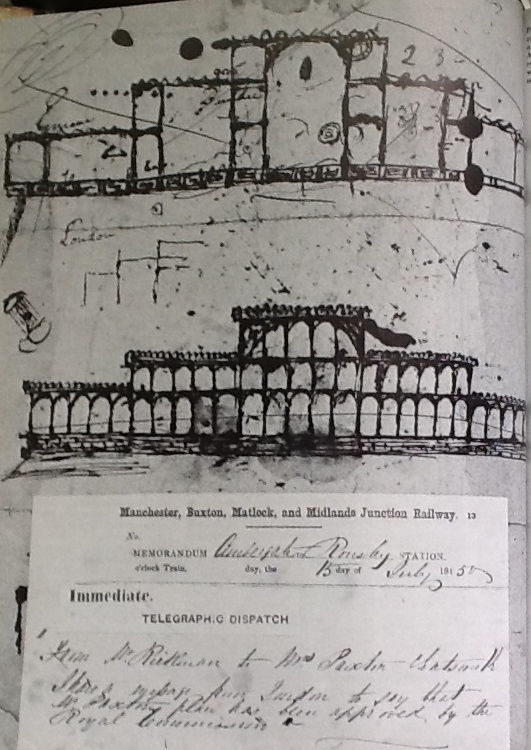 (This is the telegram accepting the design.)

They were amazed by this completely revolutionary design.
The building could be easily taken down, the established trees in Hyde Park could grow inside it; it was enormous, light, airy and beautul.
They gave immediate approval; when the plans were published the newspapers christened Paxton's building
'THE CRYSTAL PALACE'
More later.....
Category: Victoriana