If you like spy stories and secret gadgets, you'll love this!
It is about a man, to most people totally unknown, who was a brave young pilot in the First World War, and went on to play a hidden but important role in the Second World War. 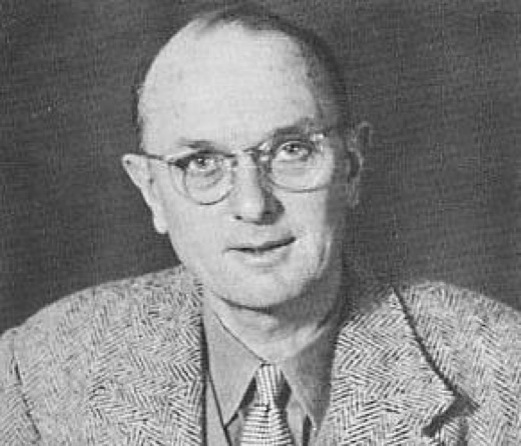 Christopher William Clayton Hutton (1893 – 1965), called 'Clutty' and also known as Christopher Clayton-Hutton, was an intelligence officer who worked for MI9, a subsection of British Military Intelligence.
In the Second World War, he was hired by the War Office to create escape and evasion gear for British servicemen and to design the methods by which escape kits could be sent to prisoner of war camps.
It is estimated that up to 35,000 British and other Allied troops who managed to escape and make their way back to Allied territory did so with Hutton's maps and other equipment.

Hutton was always interested in magicians and escapologists, and with his inventive mind was responsible for the design of escape and evasion equipment for British troops, as well as items for use by the French Resistance. 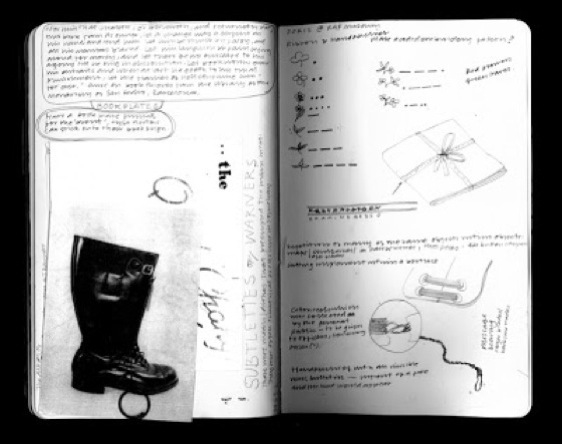 When equipment was issued in advance as a contingency plan it was referred to as Pre-Capture and hidden in the uniform.

Post-capture aids were designed for use by captured POWs.

In 1942, Hutton, as Clayton-Hutton, published a top secret booklet called Per Ardua Libertas (later he wrote Official Secret, and then The Hidden Catch, under the name of Charles Connell.)
Per Ardua Libertas contained examples of each escape and evasion map produced up to that time, and was used by American Intelligence officers researching the topic.
It is not easily available nowadays! 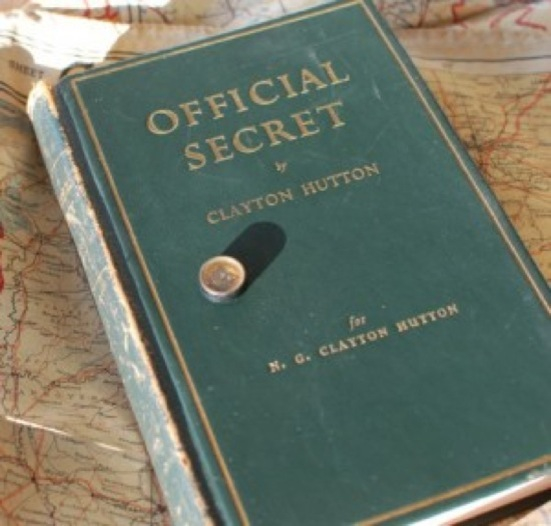 ESCAPE MAPS
The invention of the cloth map is credited to Hutton, who considered maps to be ‘the escaper’s most important accessory’.
The idea was that a serviceman captured or shot down behind enemy lines should have a map to help him find his way to safety if he evaded capture, or subsequently escaped from detention.
Clutty met the mapmakers John Bartholomew and Son Ltd. in 1940, and Bartholomew supplied maps of Germany, France, Poland, Italy, Austria, Switzerland, Belgium, Holland and the Balkans, waiving all copyrights to the map data in support of the war effort.
Once he had the cartographic source, he needed a medium onto which he could print the map.
This medium needed to be quiet to unfold, (paper makes noises when unfolded), would not disintegrate when wet,(paper disintegrates into mush), maintained its integrity when folded at the crease line and could be concealed in very small places.

Silk seemed to have all the qualities required.
He first attempted to print on a silk square adding pectin to the ink so that it would not run or wash out when put in water.
He went on to print escape maps on silk, man-made fibre and tissue paper made from mulberry leaves.
The tissue-paper map had the texture of onion skin but possessed extreme durability.
It could be balled, put in water and soaked, and then flattened without crease, fading or disintegration. 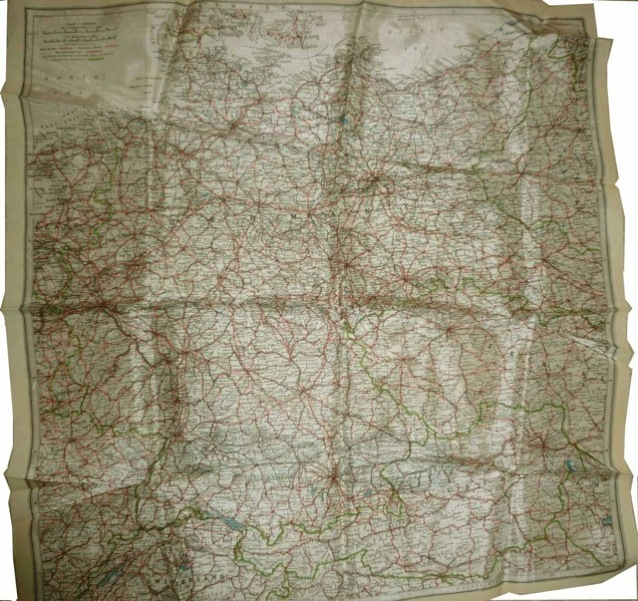 It could be folded up in such a way that it would occupy a very small space, such as inside a chess piece or a record.
Most maps were printed double-sided to increase their usefulness.
Maps, along with other escape equipment, were always carried by aircrew.
By the end of the war, over 400,000 escape maps had been printed.
To an escapee from a POW camp, they could mean the difference between life and death.

Here is a selection of miniature compasses which could be concealed in everyday accessories. 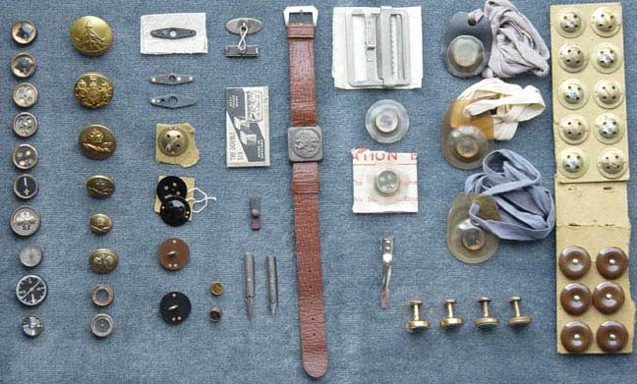 For these Hutton approached the instrument makers Blunt Brothers, who came up with a number of tiny compasses so small, they could even be secreted in the back of a button.
Aircrew uniforms contained one unscrewable button with a compass inside.
At first they could be discovered easily by the guards; the answer was to reverse the screw threads, so that when prison guards tried to unscrew the buttons they tightened them instead. 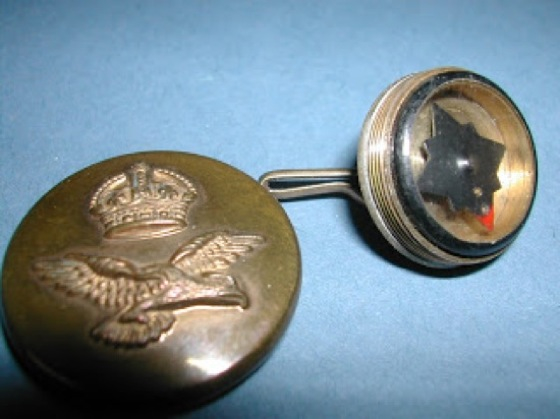 When the new designs were eventually discovered,, other compasses were invented, including a magnetised razor blade on which the G of ‘Gillette’ always pointed north when the blade was hung on a thread. 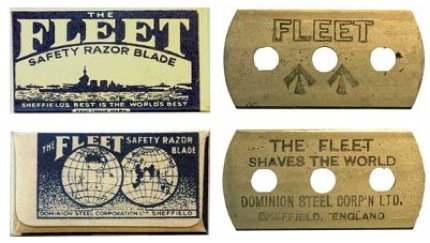 From that point on, all razor blades were magnetised.

Blankets were sent with clothes patterns drawn in invisible ink.
These would become clear when soaked in water, enabling escapees to stitch them together to make civilian clothing, once they had escaped.
Uniforms were intended to be converted easily to look like civilian clothing.

Hutton designed flying boots with hollow heels to hide maps and escape equipment.
Special flying boots were designed to be converted easily to look like civilian shoes.
They consisted of wool-lined shoes onto which were stitched zip-up leggings.
A knife was provided in one leg to cut away the leggings and the top sections could be put together to form a warm waistcoat.

Two aids in one! 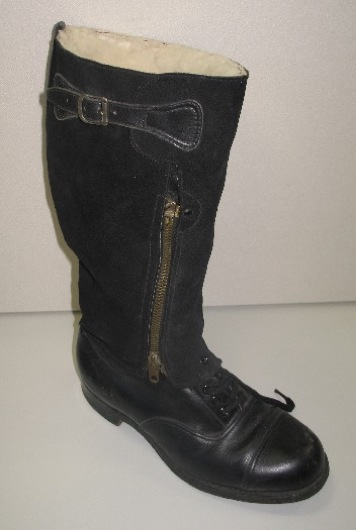 Hutton was responsible for escape kits in a small cigarette tin designed to carry small supply of condensed food and foreign currency.
The tin also contained razor blades, water-purifying tablets and a rubber water bottle.
By 1941, all British aircrew carried these.
Another design was in the form of a useful water-bottle.
This contained rations, pills,a compass and map. 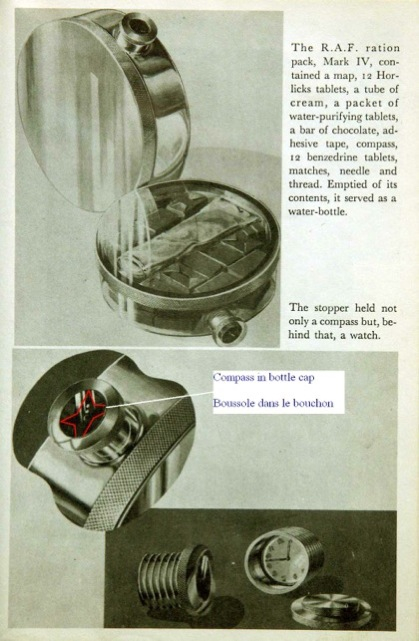 Among the many small escape aids Clutty developed were:
A compass consisting of 2 trouser fly buttons: the lower one had a pivot and the upper one was magnetised.
A button made of bakelite with a magnetic element in it.
A compass concealed in the belt buckle.
Button-compasses
Collar-stud compasses
Tooth-frame compass 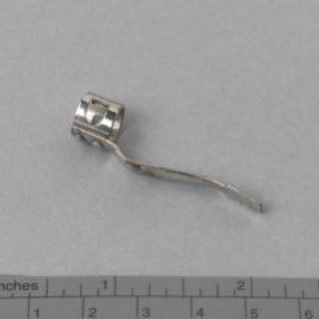 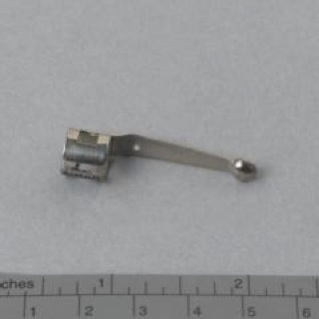 But there was to be more! 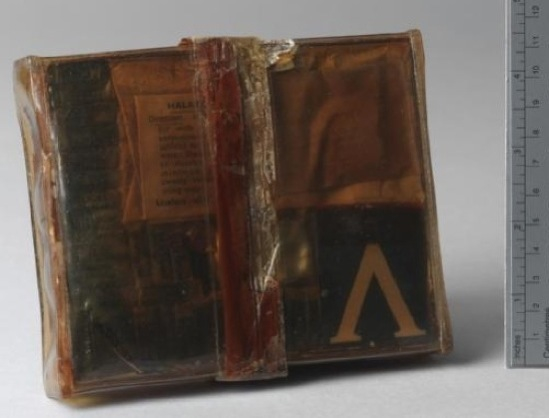 This escape kit was associated with the Second World War service of Group Captain K S Batchelor in the Royal Air Force (RAF).

The 'escape pack' was probably Clayton Hutton's (MI9's Intelligence Officer) most widely distributed escape aid.
It contained: malted milk tablets, boiled sweets, bar of plain chocolate, matches, benzedrine tablets (for energy), halazone tablets (for purifying water), a rubber water bottle, razor (with magnetised blade), soap, a needle and thread and a fishing hook and line.
The pack fitted into the outer front map pocket of battledress trousers or lower side pocket of a service dress tunic.
The packs were issued to all operational aircrew from late 1940 and the United States Army Air Force from mid-1942 and were designed to sustain an individual for forty-eight hours.
The kit was in a clear acetate plastic holder, sellotaped in the middle, containing several escape items(see above) which are ,even after all this time, visible through the covering.

Hutton was also responsible for the delivery of escape kits to POWs.
The Geneva Convention allowed prisoners to receive parcels from families and relief organisations.
These were dispatched through a number of fictitious charitable organisations, created to send parcels of games, warm clothing and other small comforts to the prisoners.
One of the major problems of captivity was boredom, and games and entertainments were permitted, as the guards recognised that if the prisoners were allowed some diversions, they would be less troublesome. 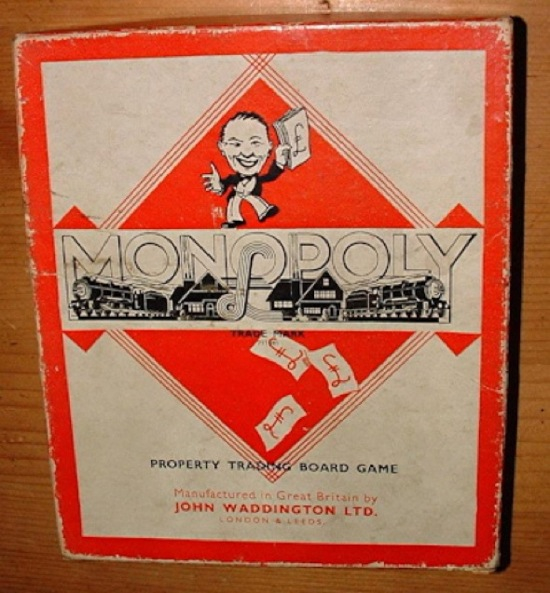 It is not generally known that, beginning in 1941, British military intelligence rigged thousands of boxes of Monopoly with tools, compasses, currency and even tiny maps that prisoners could use to make their way to freedom.
All the equipment was miniaturized and pasted into the board, hidden within the bundles of game money, crammed into the tokens, or even packed into the tiny houses and hotels.
What’s more amazing is that the games containing these secret escape kits were unwittingly distributed to POWs as part of Red Cross care packages right under the nose of German prison guards. 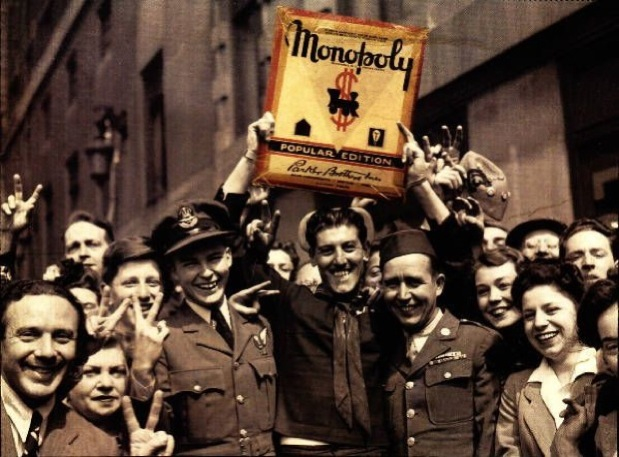 The British secret service and Waddingtons, the owners of the Monopoly game company, designed special editions of the game that were smuggled into prison camps through care packages.
“These care packages from different relief organizations often included games because it served as a distraction for the prisoners,” said museum volunteer Erick Tracer.
The special version included four tools hidden under the game board, including a map of the region, a compass, a metal file and real currency for that region hidden under the play money.
Games manufacturer Waddingtons helped by supplying the specially doctored editions of its Monopoly board game, and other games. 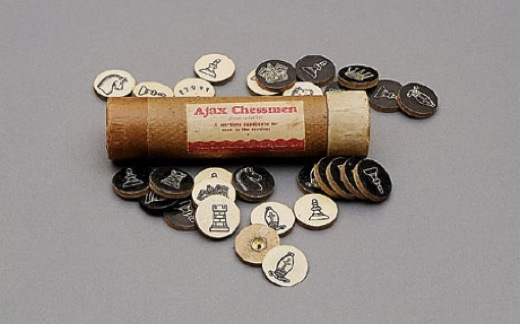 This ingenious device was also used by British POWs to escape from their German captors.
The white bishops aren't all that they appear to be and nor is the label on the tube.
They may look like worn pieces of an old cardboard chess set, but these little discs contain a prisoner of war escape kit.
When prised open a white bishop from the 'Ajax Chessmen' reveals a tiny compass hidden inside.
And a silk map is believed to still be concealed in the cardboard tube.
Even the innocent handwritten message on the tube which contained the 32 chess pieces is in code.

Snakes and ladders, table tennis, and peelable playing cards were all used to smuggle in escape kits with hidden maps and other equipment.
In the strictest of secrecy, in a securely guarded and inaccessible old workshop on the grounds of Waddington’s, a group of sworn-to-secrecy employees began mass-producing escape maps, keyed to each region of Germany or Italy where the Allied POW camps were.
When processed, these maps could be folded into such tiny dots that they would actually fit inside a Monopoly playing piece.
As long as they were at it, the clever workmen at Waddington’s also managed to add a playing token, containing a small magnetic compass, a two-part metal file that could easily be screwed together and useful amounts of genuine high-denomination German, Italian, and French currency, hidden within the piles of Monopoly money!

A ‘rigged’ Monopoly set was identified by means of a tiny red dot, one cleverly rigged to look like an ordinary printing glitch, located in the corner of the Free Parking square. 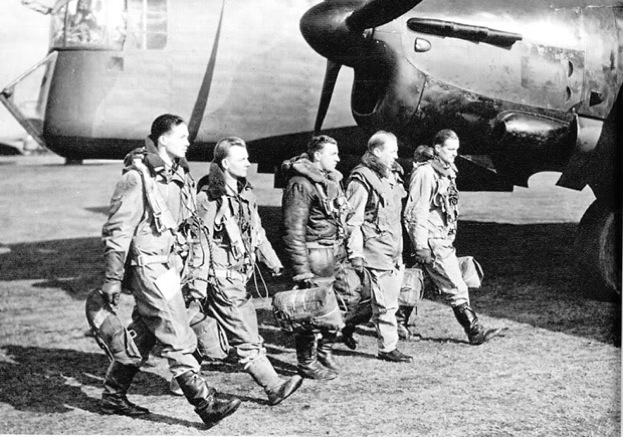 Of the estimated 35,000 Allied POWS who successfully escaped, an estimated one-third were aided in their flight by the rigged Monopoly sets..
Everyone who did so was sworn to secrecy indefinitely, since the British Government might want to use this highly successful ruse in still another, future war.
The story wasn’t declassified until 2007, when the surviving craftsmen from Waddington’s, as well as the firm itself, were finally honoured in a public ceremony. 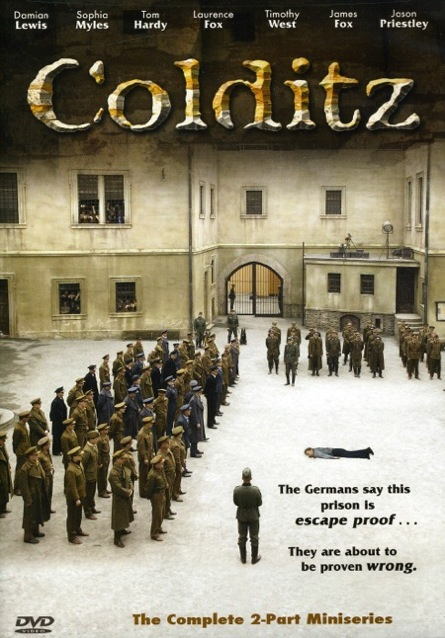